After 110 Days in Jail for Saying 'Pakistan Zindabad,' 19-Year-Old Activist Gets 'Default Bail'

Amulya was booked for sedition along with other charges of the Indian Penal Code. Ninety days later, there has been no charge sheet. 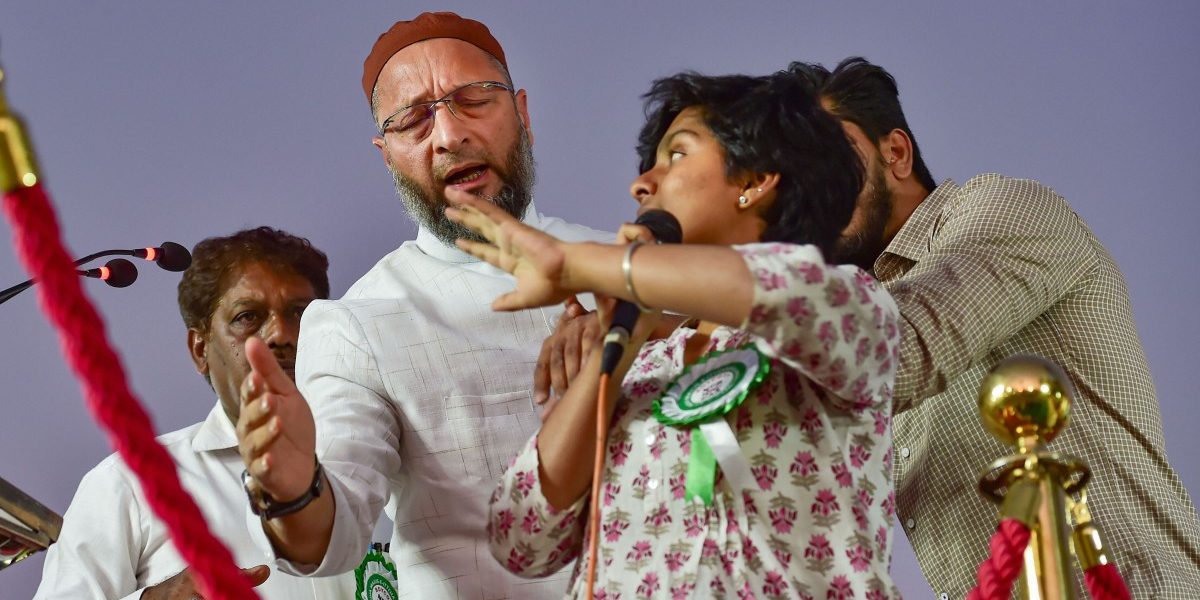 Mumbai: It took close to four months and a string of petitions before the lower courts and Bangalore high court to secure bail for the 19-year-old undergraduate student Amulya Leona Noronha. Amulya had been arrested for shouting “Pakistan Zindabad” slogans.

On June 10, just hours after a sessions court rejected her bail application claiming that she would abscond if released from jail, another magistrate court had granted her bail. The metropolitan magistrate court granted her a “default bail” since Bengaluru police had failed to file charge sheet in the case within the mandated 90 days period.

Amulya, a journalism student studying in Bengaluru, was arrested on February 20, when she had stood on a stage and enthusiastically hailed Pakistan in her speech. The slogan had alarmed the men — including All India Majlis-e-Ittehadul Muslimeen (AIMIM) leader Asaduddin Owaisi who was on the stage — so much that they had tried to snatch away her microphone and prevented her from speaking a word. Her subsequent lines hailing India were suppressed in the chaos and the intention of her slogan was misunderstood. Her act was a part of the ongoing nationwide protest against the Citizenship Amendment Act.

Amulya was booked for sedition along with other charges of the Indian Penal Code.

Amulya was soon arrested and since then has been languishing in the prison. Her lawyer R. Prasanna  told The Wire that she will be released from the central prison, Parappana Agrahara, in Bengaluru on June 12. She was granted bail against a surety of Rs. one lakh and on the condition that she would not influence the witnesses in the case.

Ever since the CAA was passed and the Narendra Modi-led government indicated that the two other impending countrywide exercises such as the National Register of Citizens (NRC) and the National Population Register (NPR) will also be implemented nationwide, Karnataka’s civil liberties movement has intensified its fight against these laws. In Bengaluru alone, several hundred protests were organised by students, and civil society members.

Amulya was one such student who actively participated in these protests and was at the forefront of organising and mobilising people.

Securing Amulya’s bail was not easy. A team of three lawyers, Ramesh, Kashinath J.D. and Prasanna, had been making repeated attempts. “We were making simultaneous efforts in the high court and the sessions court. On May 20, soon after 90 days had ended, we decided to move for a default bail as prescribed under Section 167 (2) of the CrPC (Code of Criminal Procedure),” Prasanna says.

Under section 167 (2) of the CrPC, the magistrate has no authority to detain the accused in custody beyond the statutory period of 60 or 90 days. “But in Amulya’s case, even the mandatory bail was prolonged. We first filed an application on May 26 before the special court which was hearing only urgent matters during the lock down. Three days after the application was moved, we were informed that the email id to which we had sent the application was not functional and a fresh application had to be moved. We again made another application on May 29 and then another one on June 2 before a magistrate court,” Prasanna explains.

Soon after the lawyers moved the magistrate court, the police filed a chargesheet on June 3. “The default bail then became a full fledged argument with the prosecution citing High court orders and reasons why Amulya should not be out. After a week- long process, the court, on June 10, finally, ordered for her release,” adds Prasanna.

The same day, a sessions court had rejected her application and had observed that Amulya could jump bail and that her slogans were provocative and made with the intention to incite people. The prosecution, the defence layers say, intentionally had conflated the matter by bringing in charges from another pending case. The prosecution had raised objection over a poster “F**k Hindutva” that was held in one of the anti- CAA protests.

The prosecution had claimed that, “the poster had caused hatred or disaffection towards the religion and government as established by law in India”. The additional sessions Judge Vidyadhar Shirahatti had accepted the prosecutions claim.

From the beginning itself, defence lawyers had argued that hailing Pakistan cannot be looked at as an act of sedition. “Pakistan is not an enemy nation,” the lawyers had argued. But rejecting the ground, Judge Shirahatti had observed, “It is my opinion that there are no materials to show that Pakistan is or not an enemy country. But the slogans which are alleged to have been used by the petitioner will certainly affect the feelings of public, law, order and public peace.”

Amulya, originally from Koppa taluka in Chikkamagaluru district, will continue to live in Bengaluru, her lawyer confirmed. Soon after her arrest, several right wing organisations had exerted pressure on her family members, even pushing her father to issue a statement condemning her. The family has since lived amidst constant threats.