Amidst Communication Blockade, Kids Take to Kashmiri Variant of Cops and Robbers

With no internet or schools to keep them occupied, children have rediscovered the 'military-mujahid' game, enacting as entertainment the war which the Centre hopes its lockdown will avert. 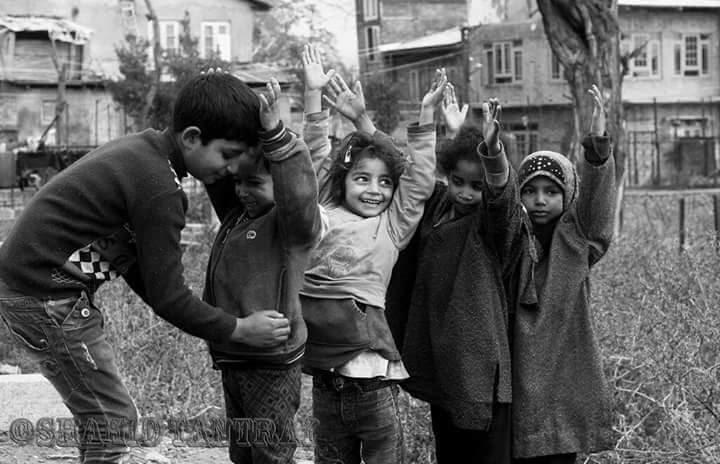 The game is fairly simple. Children play roles of mujahid (militants) and army men. The robust kids with relatively better histrionic talent are given the role of mujahids. They are also equipped with better rifles, bullets, bombs and grenades – made of wood and discarded pieces of wool or cotton. And the relatively weaker kids are given the role of army men. The game always ended in the defeat of the army men and victory of the mujahids, who were presented as heroes while the army was the villain.

Let me explain how we played it on our streets in the mid-1990s. One of us used to become Major Shekhar – a military commander. Another would become Budhan – a militant of the Hizbul Mujahideen. Budhan used to be in a special jihadi dress with his face covered, rifle directed at Major Shekhar. Budhan was accompanied by suicide bombers – all robust and determined. Shekhar, in a rag-tag dress armed with ordinary weapons, was made to enter the mujahideen’s home and, thus, ensured a gun battle. Budhan and his men would always defeat Shekhar and his group of ‘timid’ military men. Then the ‘mujahids’ would collectively cheer and celebrate their victory over the ‘coward’ military men.

But we also played video games, watched cartoons on television and played other outdoor games in schools.

Also Read: Kashmir – The Home I Have Never Been To

Now, as a 29-year-old, I visited my village on the eve of Bakr Eid (August 12) in Baramulla district of Jammu and Kashmir. I stayed with my family in the locked-down Valley for 10 days and found that kids were confined to their localities. They were not going to school. In their neighbourhoods, they were only playing the military-mujahid game.

As a scholar of sociology and ethnography (I did my PhD in folk literature and ethnography from Aligarh Muslim University), I now think about how our generation did not have a normal childhood. What pains me is that the generation of kids in our villages has been forced to experience an even more distorted childhood. When I joined a sociology course at university, I came to know that Kashmir had a great tradition of folklore. There once was a time when storytelling was the preferred mode to engage children. All the youngsters in a family would gather around their grandmother to listen to their favourite tales. These were stories that were passed down, from one generation to the next. But not to my generation. I only learnt them from books.

I was born in the early ’90s, when militancy and gun culture had firmly established their sway in the Valley. Our elders were more preoccupied, trying to be safe from the security forces, which had a ubiquitous presence in our homes, schools and streets. We heard tales of the military taking away some youth, never to be seen again.

The situation has worsened during the protracted lockdown in the Valley after the dilution of Article 370. The army was an object of hate for the children even in the ’90s. It has grown manifold in the present situation.

When I grew up, my family members told me that as a child, I used to say ‘azadi’ a lot, which is why my nickname was “Azadi”. My family members and friends from the village still call me Azadi.

I remember how my cousin, Imran (name changed) was good at making wooden guns and bullets that we used in the military-mujahid game. I also remember an incident at our local high school, which had a lasting impact on my psyche. Two policemen, carrying two dead bodies in a jeep, came to our school premises, which had a graveyard in one corner. It was time for namaz. The policemen asked me to guard the bodies, so that they could offer their prayers. I was barely six/seven years old when I got the “assignment” to guard the bodies of the dead men. And see, up close, that ‘military-mujahid’ was not just a game.

As told to Nalin Verma.

Ahrar Ahmad Lone is a researcher and a teacher at a private educational institution in Kapurthala in Punjab. He lives in Jalandhar.

Note: In an earlier version of this story, the image was wrongly attributed as ‘author provided’. The error is regretted.