Gujarat: Another Brick in Trump's Wall

Children play near the wall being constructed in Ahmedabad, to hide a slum from Trump during his visit. Photo: Reuters/Amit Dave

As the US President Donald Trump visits Ahmedabad in Gujarat this month, we hear that the Ahmedabad Municipal Corporation (AMC) is building half-kilometre wall on the stretch that leads to Gandhinagar from Ahmedabad.

The purpose of the wall, it is learnt, is to hide the 500 kutcha houses at the Dev Saran or Saraniyavaas slum area. The slum houses an estimated population of 2,500.

All in all, the AMC is building this wall to hide poverty, if not the poor.

We know well that Trump rose to power on an exclusive hate campaign, at the heart of which was his commitment and rhetoric to build a wall at the Mexican border. His arrogant pledge asking Mexico to even pay for such a wall, added to his deceitful masculinity and persona, traits which do matter in the elections to the highest office in the USA.

In our penchant for welcoming guests beyond  their expectations, we have gone too far in pleasing Trump by offering him a spectacle of a wall on his forthcoming visit. Atithi Devo Bhava, stretched to its best!

Also read: A Wall Is Being Built in Ahmedabad to Block a Slum From Donald Trump’s View

Ironically, the wall in question is not to limit illegal migration but to hide the legal citizens of this country. In fact Trump’s good friend, Modi, has other tricks up his sleeve to contain the legality of  citizens of the land but that’s a different story, for some other day.

Coming back to the wall in question, the building of walls to hide poverty is not new in this world.

It said that the wall was necessary to protect the ears of its poor! Strange that silence is still considered to be the harbinger of sanity by otherwise noisy and careless regimes. 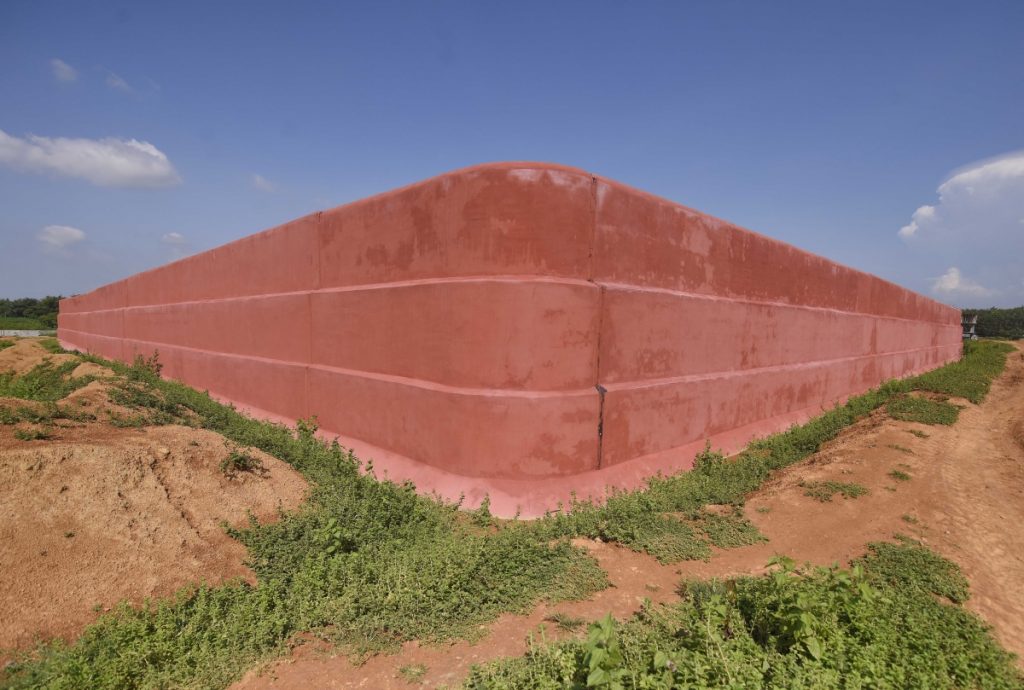 An outer wall of an under-construction detention centre for illegal immigrants is pictured at a village in Goalpara district in the northeastern state of Assam, September 1, 2019. Photo: Reuters/Anuwar Hazarika

Even though no such explanation has been offered by the Gujarat government, it is but interesting to know why do we want to hide our poor even when we cannot hide the poverty which ails the nation like a disease? The indices of human development in Gujarat reveal a story where the necessity of such a wall to hide the poor and the poverty can be explained though not justified.

Despite the so called “Gujarat model of development,” these indices clearly show that poverty and poor human existence is the unceasing companion of the Gujarati masses, irrespective of what Modi and his ilk wants us to believe.

Gujarat stood at 22nd rank among Indian states in the Human Development Index for 2018.

Another sensitive index of human development, namely the Maternal Mortality Rate was 91 per 1,00,000 live births in Gujarat in 2016 as compared to 66 in Tamil Nadu and 88 in Telangana in the same year.

In an interesting paper (titled Did Gujarat Switch to a Higher Growth Trajectory Relative to India under Modi?) published in the Economic and Political Weekly in May 2014, just when Modi took over as the PM of the country for the first time, authors Maitreesh Ghatak and Sanchari Roy could show through complex statistical analysis that the success story of Gujarat under Modi’s chief ministership was nothing more than what the state could have even otherwise achieved in the natural course of things.

In fact Gujarat fared worse when compared to Bihar for the same period of analysis. No wonder the ill fate of Gujarat has continued unabated till date so as to warrant the need of building the wall of shame.

The need for a wall to hide the poverty in Gujarat is even more acute it seems. According to the National Crime Records Bureau (NCRB) report, ‘Accidental Deaths & Suicides in India’ released recently, the suicide rates in Gujarat due to poverty increased by a whopping 162% in 2018. The report also revealed that 21% more suicides happened in Gujarat due to unemployment as a reason.

Interestingly, one of the basic functions of a wall is separation.

In the very popular TV series, The Game of Thrones, a continent-spanning wall is made to keep out the “wild” people from civilisation. The Greeks had similar motives when they built walls. Those who lived beyond the city walls were called barbarians. These were the uncivilised people whom the walls kept at a safe distance from the civilised.

In fact, even the thick prison walls serve the same purpose: keeping the dangerous separated from the civil.

The mythical wall which God instructs Nehemiah to build in the Bible, separates and thus saves Jerusalem from the attack of the enemy. The separation by a wall is thus both symbolic and actual.

In fact in the words of Dostoyevsky:

“A wall, you see, is a wall … and so on, and so on. But is it? It is my thesis that, in addition to their versatile physical functions, walls possess an immense measure of signification and that these two realms-the concrete and the symbolic interact with each other.”

Walls have thus been tools of keeping the ‘wild’,  the uncivilised and the barbaric separated from those who are the harbingers of civility. But to build a wall to separate the view of poverty has its own unique flavour. It becomes even more important in the context of a democracy where the people, both poor and the rich, vote to form the very government which wants to hide them from visiting leaders of affluent countries.

As residents of urban metropolises we are concerned about the aesthetics of our cities. Ugly poverty is an eyesore to the landscape we want to build.

The smart cities we promise should be without the poor. Slums, ghettos and street habitation form an obnoxious trail of existence which we earnestly want to wipe off from the streets of our cities.

We care for the reputation that we build in front of visiting dignitaries. So what if we cannot address poverty, we can still build a wall.

I am not surprised. Walls divide, walls hide. Walls are stony deaf and heartless.