“Altaf tere khoon se, inqilaab aayega (Altaf, your murder will spawn a revolution),” the mourners shouted as the procession moved towards the graveyard. 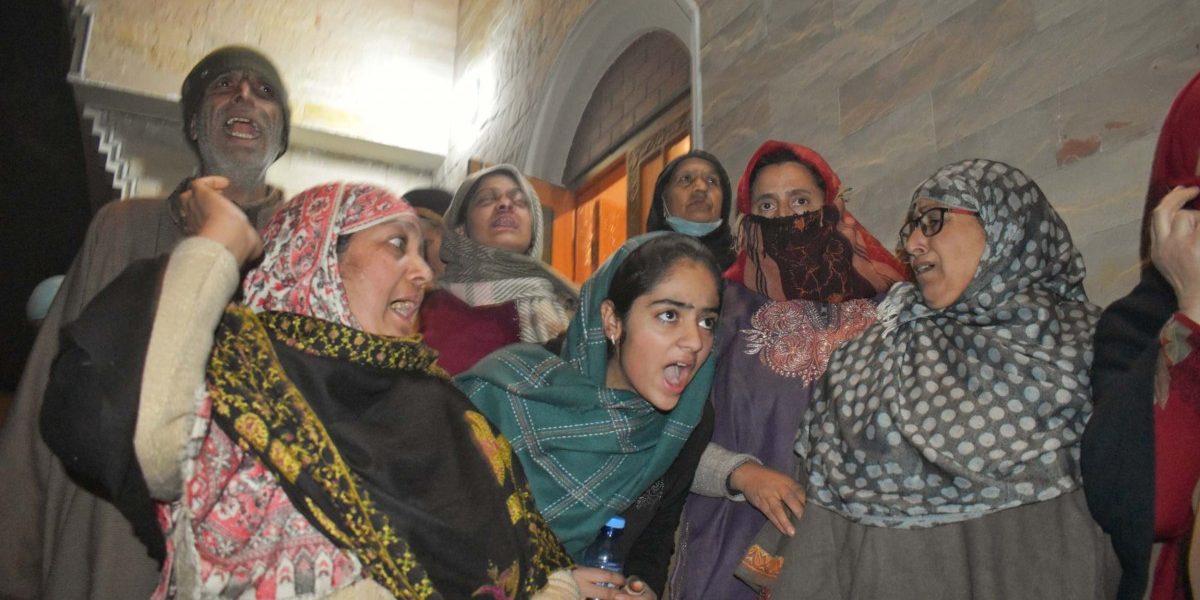 Women from Altaf's family get a final glimpse of his body. Photo: Faizan Mir

Srinagar: The mortal remains of the two Srinagar-based businessmen, who were killed in a controversial shootout on Monday, were exhumed on Thursday and handed to their families.

After a day of peaceful protests which saw a rare coming together of different political parties, lawyers, activists and ordinary Kashmiris, the two bodies were exhumed from a graveyard in north Kashmir and brought to Srinagar.

The graveyard in Wadder Zachaldara of north Kashmir’s Kupwara district, where the two men were initially buried, is the final resting place of dozens of suspected militants who have been gunned down by security forces in Kashmir over the past two years.

Altaf Ahmad Bhat and Dr Mudasir Gul, both residents of Srinagar, were gunned down inside a shopping complex on Monday evening along with a suspected Pakistani militant, Haider alias Bilal Bhai, and his alleged local associate, Aamir Lateef Wagay, a resident of Ramban district.

The shootout had turned into an embarrassment for the J&K administration after discrepancies emerged in the details shared by the police with the media and the account of happenings inside the shopping complex narrated by witnesses and family members of the slain businessmen. 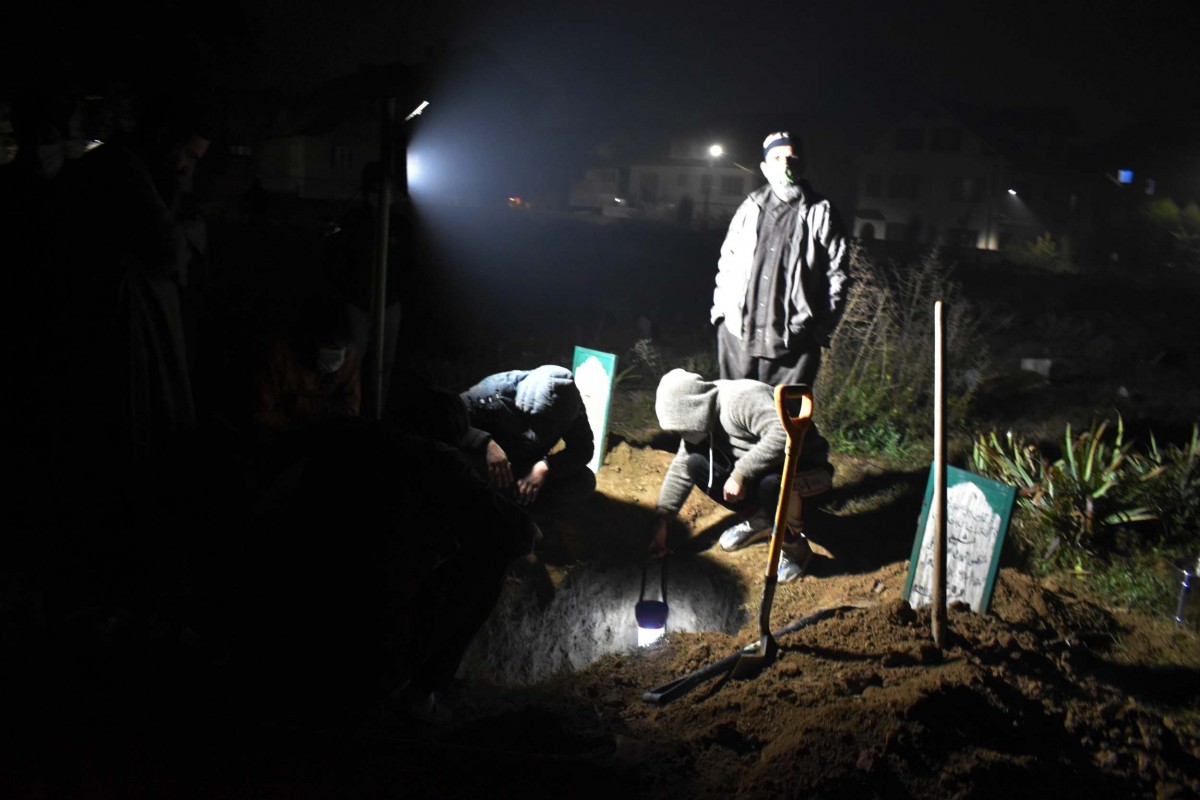 Although the families were assured by the administration on Thursday afternoon that the mortal remains of Altaf and Dr Mudasir will be returned, they were kept in a state of suspense till the last moment.

Family sources said they got confirmation about the exhumation at around 7 pm on Thursday, “We were told not to speak about it to the media. We were also told to restrict the gathering at the funeral,” a relative of Altaf’s, who didn’t want to be named, said.

Police sources said the relatives of the two businessmen were called to the Police Control Room on Thursday evening while cops in civvies were deployed around their residences to keep an eye on the law and order situation.

“We had to hide ourselves inside their kitchen so that police wouldn’t know about our presence there. It was only when the body was brought to their home that we came out,” said a Kashmiri photojournalist, who didn’t want to be named.

At around 12:35 am on Friday, Altaf’s body was brought to his home in Srinagar’s Barzulla locality, triggering emotional scenes. Aggrieved family members, including his wife and two minor daughters, rushed out of the house to get a last glimpse of the slain man before he was taken for the last rites.

“La Ila Ha Illallah, Allah-u-Akbar (There is no God but Allah. Allah is great),” one of Altaf’s daughters screamed, breaking down into tears as his father was brought into the house compound for the family members to get the last glimpse.

Amid tight security presence, the body was carried by hundreds of mourners to their ancestral graveyard in Barzulla locality. The mourners, around 800-1,200 of them, shouted pro-freedom and pro-Islam slogans.

“Altaf tere khoon se, inqilaab aayega (Altaf, your murder will spawn a revolution),” the mourners shouted as the procession moved towards the graveyard. The body of Dr Mudasir was buried in a graveyard in the adjoining Sanat Nagar locality.

The family members of both Altaf and Dr Mudasir have consistently maintained that they were innocent and the security forces, who carried out the anti-militancy operation on Monday, used them as human shields, a violation of Geneva Conventions to which India is a signatory.

The two families had staged a peaceful sit-in at Srinagar’s Press Enclave on Wednesday to demand the mortal remains of their loved ones. However, the electricity supply to the area was allegedly cut before a police party swooped down on the site of protest and forcibly removed the protesters, evoking outrage.

“Open fire, terrorists,” Abdul Majid Bhat, brother of Altaf, told a policeman, pulling his automatic rifle towards his chest before he was bundled into a police vehicle and whisked away to the police station. He and other detainees were however later set free. 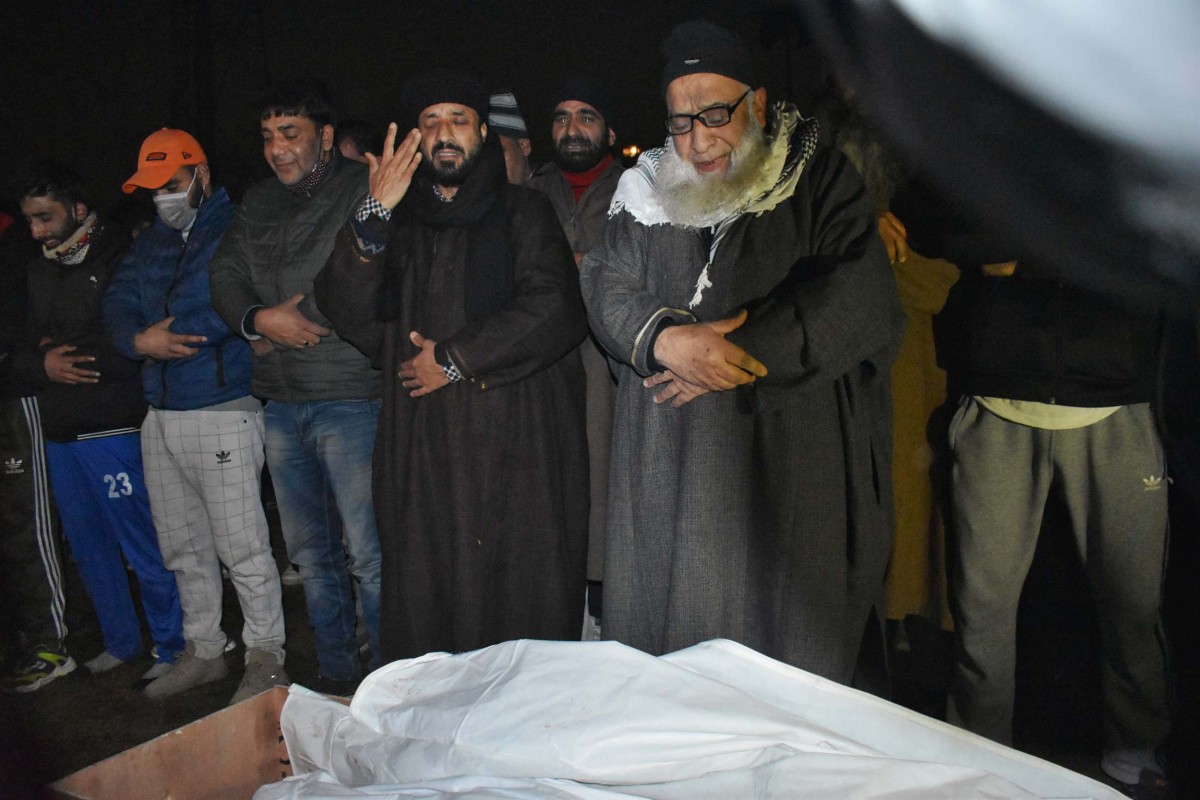 The manhandling of the aggrieved families evoked a rare show of solidarity from people cutting across political and religious divides, who staged peaceful protests across Kashmir. While Omar Abdullah led a sit-in protest in a public park near his Gupkar residence, Mehbooba Mufti was put under house arrest.

Photos of peaceful protests being organised by lawyers, activists and prominent citizens from different parts of Kashmir, with people holding placards with messages of solidarity for the families of Altaf and Dr Mudasir, circulated widely on social media.

After massive public uproar, the J&K administration has also ordered a magisterial inquiry into the shootout. According to an official order, the inquiry will be carried out by the additional district magistrate of Srinagar and he has been asked to complete the probe and submit his report within 15 days.

But the families fear that the magisterial probe is unlikely to remove the cloak of mystery surrounding the circumstances under which the four persons were killed in the shootout on Monday.

The State Human Rights Commission, which was made defunct following the reading down of Article 370, has reported more than 500 magisterial inquiries in J&K from 1990 to 2018, of which only one inquiry was completed. However, the probe team never submitted its report.

The Coalition of Civil Society, a Srinagar-based rights advocacy group, has documented 108 cases of human rights abuses in J&K in which probes were ordered by the J&K government from 2008 to 2019. But there have been zero prosecutions in these cases.