A government social audit conducted in April had found that 96.9% of ration card holders surveyed preferred the older system.

New Delhi: Close to ten months after it was launched, the Jharkhand government has said that it will be immediately terminating the direct benefits transfer (DBT) pilot project it had launched in the Nagri block. This decision has come after months of protests from the people, who said that the DBT, introduced as part of the public distribution system, was infringing on their rights.

The programme was launched in October 2017, with the government claiming that it was part of the plan to move to a more “cashless” economy. This claim was questioned by many, particularly because the new system involved a lot more cash than the old one. Under the new system, instead of going to the local ration shop and buying rice at Re 1/kg, people first had to wait for the government to transfer Rs 31/kg they were entitled to into their account, add Re 1/kg to that, and use that money to buy rice.

In February this year, people of Nagri block held a mass protest in Ranchi, demanding that the government revert to the old public distribution system as the DBT pilot was creating a host of problems for them. As The Wire had reported then, people complained of having to make multiple trips to the banks, with confusion prevailing about which bank account the money was going to be deposited in. Because of this, some said they were having to use their own money to buy the same quality but now more expensive rice.

A sample survey conducted by researchers conducted at the beginning of 2018 found that an overwhelming 97% of respondents in Nagri wanted to go back to the old system. Not convinced by these results, the state government decided to conduct its own survey in April – and come up with largely the same results. The social audit found that 96.9% of ration card holders surveyed preferred the older system. The results of this audit were made public in June, and state government officials told The Wire then it had sent the report to the Centre and also asked for permission to withdraw the pilot.

On August 6, under-secretary to the government of India B.K. Hembrom wrote to the food department secretary, saying that given “the problems being face by the State Government in implementation of the pilot project”, the request to revoke it was being accepted.

On Tuesday (August 7), the state government issued a notice instructing the relevant authorities to discontinue the programme, and go back to selling rice at ration shops at Re 1/kg. 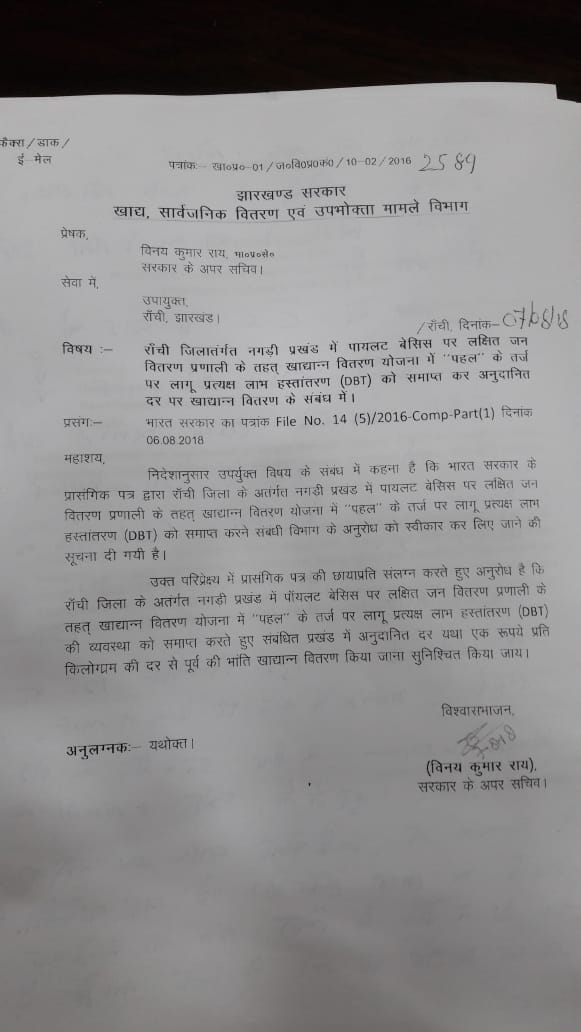 The instructions issued to stop the pilot project.

In a statement, the Right to Food Campaign has welcomed the government’s decision to withdraw the pilot. “The DBT pilot caused enormous hardship to the people of Nagri, especially vulnerable groups such as single women and the elderly,” the activists have said. “The Right to Food Campaign Jharkhand appeals to the state government to abstain from any further experiments of this sort. Instead, the PDS should be further improved and consolidated, e.g. by universalising the PDS in rural areas and including pulses and oil in the PDS basket.”