We as a group do not endorse or support any form of violence or vandalism, the actors said, "but we do support the right of the citizen to engage in peaceful protest and this sacred right has been curbed in UP." 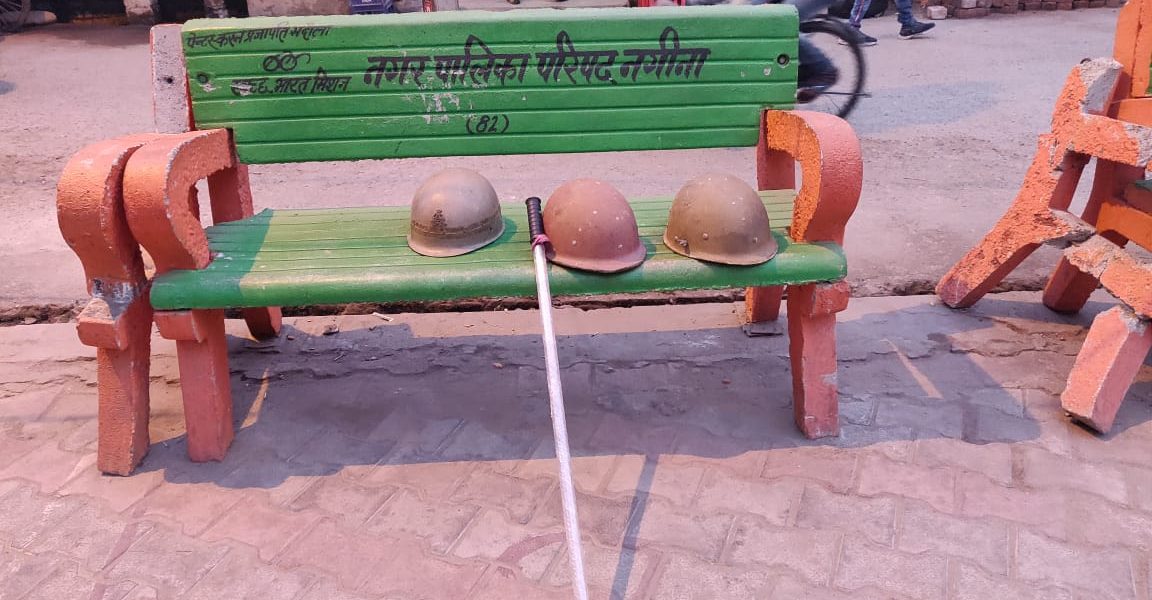 After unleashing violence inside the homes of people in Nagina near Bijnor, the mere presence of helmets and lathis on a bench is a reminder of what the police is capable of. Photo: Naomi Barton/The Wire

A group of actors and directors – Anurag Kashyap, Vikramaditya Motwane, Konkona Sen, Aparna Sen, Alankrita Shrivastava, Kubbra Sait, Mallika Dua, Zeeshan Ayyub and Swara Bhasker – released a statement on Thursday expressing their concern at the violence and repression unleashed by the police in Uttar Pradesh against those protesting the Citizenship (Amendment) Act in various towns across the state.

Appended below is the full text of the statement:

We the undersigned make this appeal as actors who are deeply disturbed about the more recent developments in Uttar Pradesh (UP) related to the protests against the passage of the Citizenship (Amendment) Act.

For all of us, UP is special. Some of us trace our family roots there; many of us have worked there for our films; but for all of us, the ethos of India’s largest state, with its rich history, social diversity and distinctive imagery, have been central to the imagination of India as depicted in cinema.

The CAA itself, as a legislation, has sparked contrasting views. But irrespective of one’s views on the merits of the law, there is something more fundamental that all of us agree on, in line with India’s constitutional values — the right of citizens to protest peacefully; the duty of the state to respond proportionately, within the framework of law; and the ultimate role of courts in determining guilt and punishment.

We believe that all these principles have been undermined in UP, largely because of the excesses of the government. The fundamental rights to life and liberty, free speech, free movement, and association are also under great jeopardy in the state.

We would like to draw attention to the following elements of the situation in UP — the scale of deaths, reportedly due to police firing; the excessive use of force, largely targeted at one community; reports of widespread detentions of citizens and, even of torture of minors; the use of politically inflammatory language by the highest leadership; and the clampdown on civil liberties.

Media reports refer to 18 deaths in UP, mostly due to bullet injuries. There is a prescribed standard operating procedure while dealing with protests. There is reason to believe that the procedure was not followed; there is also evidence to suggest that killings can be traced back to actions of security personnel. Many more citizens are grievously injured. We condemn the killings, and call for justice for all victims immediately.

There have also been media reports about mass detentions of protesters, particularly in western UP. Video clips of the excessive use of force by the UP police have found their way. We find this deeply disturbing and shocking. Attacking unarmed citizens, or detaining them without due process, for exercising their democratic right to peaceful protest – and in some cases, when they have not even participated in protests — cannot be condoned by any metric. The chief minister of the state has been talking about taking ‘revenge’ against those who break the law. While no one disputes the state’s responsibility to maintain order, it is evident that such inflammatory advice — using rhetoric that goes beyond the law — has been seen as a political directive to the police to unleash excessive force on citizens and deliberately damage citizen property in a selective manner.

Senior police personnel, too, have followed suit and have been heard ordering their units to “shoot the protesters” and extremely provocative and abusive language has been used against citizens, particularly the minority community. This is deplorable and unbecoming of a law enforcement agency. It erodes the trust citizens have in the state, with potentially long term costs to the entire framework of rule of law.

The internet shutdown in many parts of the state is yet another instance of the trampling of a fundamental right and grave inconvenience has been caused to the affected citizens.

We as a group do not endorse or support any form of violence or vandalism – much less any damage to public property. We, in fact, condemn it and believe that if anyone has engaged in violence, they must be booked under relevant laws and subjected to due legal process. But we do support the right of the citizen to engage in peaceful protest — this sacred right, integral to democracy, has been curbed in UP.

We urge the Indian courts to take suo moto cognizance of what has ensued in UP and request that a judicial inquiry be instituted into the loss of life and limb and damage to property.

As concerned citizens, we remain committed to the letter and spirit of the Constitution of India and adopt Gandhian means of non-violence to resist such oppression.