Arrested on February 28 after 10 members of the RSS's student wing registered a complaint against his posts blaming the Delhi riots on Hindutva, Souradeep Sengupta returned home late on March 3.

New Delhi: Souradeep Sengupta, the physics lecturer in Silchar, Assam who had been arrested and remanded to judicial custody after rightwing activists alleged he had insulted ‘Sanatan Dharm’ in his Facebook posts, got bail on Tuesday. Members of the Akhil Bharatiya Vidyarthi Parishad have said that his actions insulted the nation, Hinduism and Prime Minister Narendra Modi.

The chief judicial magistrate granted bail to the 25-year-old scholar on a bond of Rs 15,000. “He cannot move out of town without taking permission from the court. He will also cooperate with the police in their investigation into the case. These are the two conditions for his bail,” said Sengupta’s lawyer, Niladri Roy.

From Saturday, February 29, till his hearing on March 3, Tuesday, Sengupta – who teaches at Gurucharan College – was lodged at the Silchar Central Jail.

Arrested on February 28 after 10 members of the ABVP registered a complaint against his Facebook posts, Sengupta had been booked for non-bailable offences under sections 295A and153A and the bailable offence of criminal intimidation under Section 507 of the Indian Penal Code.

He has also been booked under Section 66 of the IT Act – a provision that was struck down by the Supreme Court in 2015.

The complainants were former and current students of the college where Sengupta is a guest lecturer. They had taken exception to Sengupta’s posts on Facebook where he had placed the blame of the communal riots in Delhi’s north east on the Hindutva movement and Prime Minister Modi.

Screenshots of Sengupta’s posts uploaded by rightwing activists. The highlights are theirs.

In addition to calling Sengupta a “hate monger” for his Facebook post, the 10 complainants cited in their letter to Silchar police that he abused “Sanatan Dharma as a whole.” Sanatan dharma is understood to refer to the entire set of religious duties that are to be executed by Hindus.

Far from abusing Sanatan Dharm, as the ABVP claims, Sengupta’s only reference to it was in the words ‘Sanatan Dharm my foot’. ‘My foot’ is an idiomatic English expression and its use in the impugned sentence means the acts he described had nothing to do with Sanatan Dharm.

However, Rohit Chanda, ABVP’s head of student development at Silchar, told The Wire that while Sengupta had received bail in the course of law, he should not have used the words he did against Modi and “the Hindu dharma”.

Chanda is one of the original complainants in the case.

“You can criticise anyone, even the PM, but you cannot call him what he did. This is not right. The Gurucharan College, where I am from…there, students should not be taught by a teacher who can say words like these. A teacher must not use such words,” said Chanda. 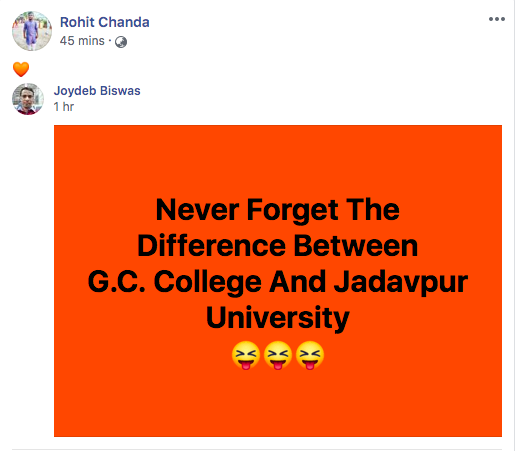 ABVP’s Silchar city secretary Karanjit Deb, another original complainant said the complaint against Sengupta was not necessitated by the fact that he had “commented” against the prime minister. “Yes, you can comment on government policy or against political parties. This right is provided by our constitution, but addressing the democratically elected Prime Minister as “mass murderer” is not acceptable. It is a threat to national security and I hope the honourable court will take these in consideration at next proceedings.”

Asked whether their action in registering a case over Facebook posts curtailed the freedom of expression, Deb said Sengupta had used “abusive words against a religion which is followed by over 100 crores of people across the world.”

He further added, “Our constitution allows us ‘freedom of expression’ provided that we are not saying anything against the integrity and sovereignty of India and hurting the religious sentiments of anyone. I am free to move my hands, but I can’t move my hand through someone’s body in the name of freedom. Similarly, in the name of freedom of expression, we cannot say anything about anyone or cannot hurt anyone’s religious sentiments because people also have the freedom to practice their own religious faith.”

Sengupta’s family had told The Wire that initially ABVP activists had agreed to withdraw the complaints and come to an understanding if Sengupta removed the posts and issued a public apology, both of which he did. However, many rightwing supporters and activists, including Karanjit Deb, have shared Sengupta’s allegedly offensive post even after he had deleted them. As a result, they are still on Facebook.

“Souradeep has always been clear about the fact that he did make the posts and that he was sorry about it,” said Anuradha, Sengupta’s mother.

On February 28, at around 3 pm, a mob of nearly 40 men from rightwing outfits had allegedly gathered at Sengupta’s house over his Facebook posts. Anuradha was then alone at home and had been asked by the men as to what kind of Hindus the family was, considering that there were no photographs of gods on their portico. The mob did not leave until police picked up Sengupta the moment he arrived at home.

Anuradha, however, does not want to pursue cases against the mob. “I am a teacher and a mother and considering the ordeal that I went through with my son, I do not want any other mother to go through this with her son. A lot of people have been asking me to register a case against those men, but I am extremely tired and so is Souradeep, and I do not want to pursue this,” she said.

ABVP’s Chanda denies that the mob had comprised men from the organisation. “I do not know who they were or why they had gone to the house but I can assure you that they were not ABVP people,” he said.

When asked who they could be, Chanda repeated that he did not know. A relative of Sengupta’s that The Wire had spoken to for its report on February 29, had said two men from the crowd had identified themselves as “former ABVP members.”