Even as the case proceeds in court, the family and their lawyer face intimidation from various sides.

New Delhi: “This is a very difficult time for us. I hope nobody has to ever go through what my sister went through,” the brother of the Dalit teenager who was allegedly gang-raped and murdered by four ‘upper’ caste Thakur men in Hathras exactly one year ago – on September 14, 2020 – told The Wire.

The incident – not just of the alleged gangrape, but also the forcible cremation of the body by the police, still haunts the family, who live in the same house in Boolgarhi, a few hundred metres away from where the incident took place.

A few hundred metres to the other side, the victim’s body was forcibly cremated in the dead of the night without her family’s consent, immediately after her death on September 29. This had led to national outrage.

The victim had died at Safdarjung hospital in Delhi after recording a dying declaration on the basis of which the CBI later filed its chargesheet.

After repeated denials by the UP police and its administration that this was not a case of gangrape, the CBI took over the case and filed an FIR on October 11.

Three months after the victim’s death, the CBI filed its chargesheet on December 18, charging the four men of gang-rape and murder and accusing the UP police of negligence.

The trial began in a special SC/ST court in Hathras in January this year and there have been close to 20 hearings so far, with the proceedings on prosecution witness statements and evidence going onw. By October, the defence, which is arguing that the victim’s brother himself had murdered her to protect the family “honour” will produce its witnesses – the four accused men.

The incident once again highlighted one of India’s stark realities – caste-based violence, which is particularly prevalent in rural India, more so against women.

But the time it takes to get justice, the victim’s brother says, is making the family lose hope in the judiciary too.

The victim’s sister-in-law, while speaking to The Wire, said that they knew getting justice was not going to be easy. “We want to return to our normal lives, where we are not guarded by so many CRPF personnel and able to go out of the house to work. But we want justice first, and we will wait as long as it takes” she said. After the initial difficulty in filing the FIR, the family lost trust in the local administration. Their faith in the police was completely shattered after the victim’s forcible cremation.

This has been compounded by the fact that the family has not received all of the compensation promised by Uttar Pradesh chief minister Adityanath. According to the family’s lawyer Seema Kushwaha, a portion of the monetary compensation has not been given, while the promise to provide the family a house in Hathras city and a government job for one family member still remain unfulfilled.

Fight against all odds

Several residents of the village, which is dominated by Brahmins and Thakurs, had come out in support of the accused men. As The Wire had reported, a rally was also held in support of the four accused at BJP member Rajveer Pehelwan’s house in October last year, attended by thousands.

The victim’s brother told The Wire that even now, the family is often subjected to slurs by villagers. He said that people from his village would write social media posts calling them “anti-nationals” and “traitors.”

“One such post read, ‘Bharat bhumi kam pad jayegi tum logon ko, tum Pakistan chale jao (If India is not enough for you, go to Pakistan),” the elder brother said.

In March 2021, the family’s counsel Seema Kushwaha said that she was threatened by a drunk lawyer inside the courtroom who said, “Seema, stay in your seema (boundary).” Kushwaha had also fought for justice for the 2012 Delhi gang rape victim.

While speaking to The Wire, Kushwaha recalled the incident. “I was in court when an advocate came inside and started staring at me, and later started shouting that I, an outsider, should not be fighting this case. As a result, court was adjourned for 10 minutes. He was smelling of alcohol,” she said.

She added that soon, another man entered the courtroom and disrupted the hearing for the second time.

“But after the trial restarted, another man came along with a group of men and started threatening me. Both these men were not part of the trial but they managed to scare the victim’s brother, who was supposed to give his statement that day. I could see that he was sweating,” she said. The victim’s brother is the prosecution’s first witness in the case.

She also said that since she was the only woman in court at the time, she felt scared. “I have identified both the father and son who had created this ruckus, their names are Tarun Hari Sharma and Hari Sharma,” she added.

The family then filed a plea before the Lucknow bench of the Allahabad high court, requesting security. The court had taken suo motu cognisance of the forcible cremation of the victim in October last year. 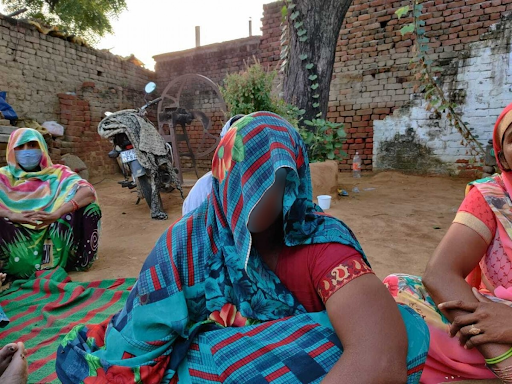 According to Kushwaha, the petition to transfer the case out of Hathras on grounds of harassment was dismissed, because she could not file a formal complaint regarding the March 5 incident as her first priority was to ensure the family’s and her own safe return home after the hearing.

Defence counsel Munna Singh Pundir denied the allegations of harassment by Kushwaha and said that she was doing “theatrics” to get the case transferred to Delhi.

“She will not have to travel to UP for every hearing. And she also knows that all the four accused men come from poor, labour class families and would be unable to bear the travel expenses to Delhi. Hence, she created a scene in the court with false allegations and stories about being abused and threatened,” he had told The Wire earlier this year.

But Kushwaha told The Wire that was never the case. “We wanted the case to be heard in Delhi for the family’s safety. They do not feel safe in their own house anymore. If anything, provisions should be made for the victim, not the accused,” she said.

Since then, she has filed a complaint with the district judge in Hathras regarding the incident but has not yet been provided enough security, she told The Wire. On September 9, the day of the last hearing, Kushwaha said, an Innova car was following her and the victim’s family despite the presence of a police vehicle ahead of them. “They were also making a video. We are clearly still not safe,” she added.