A Delhiwallah's Answers to 10 FAQs About the Farmers' Protest

With mainstream media moving away from reporting on farmers' protests, here is a guide to some of the important issues and questions concerning the ongoing protests. 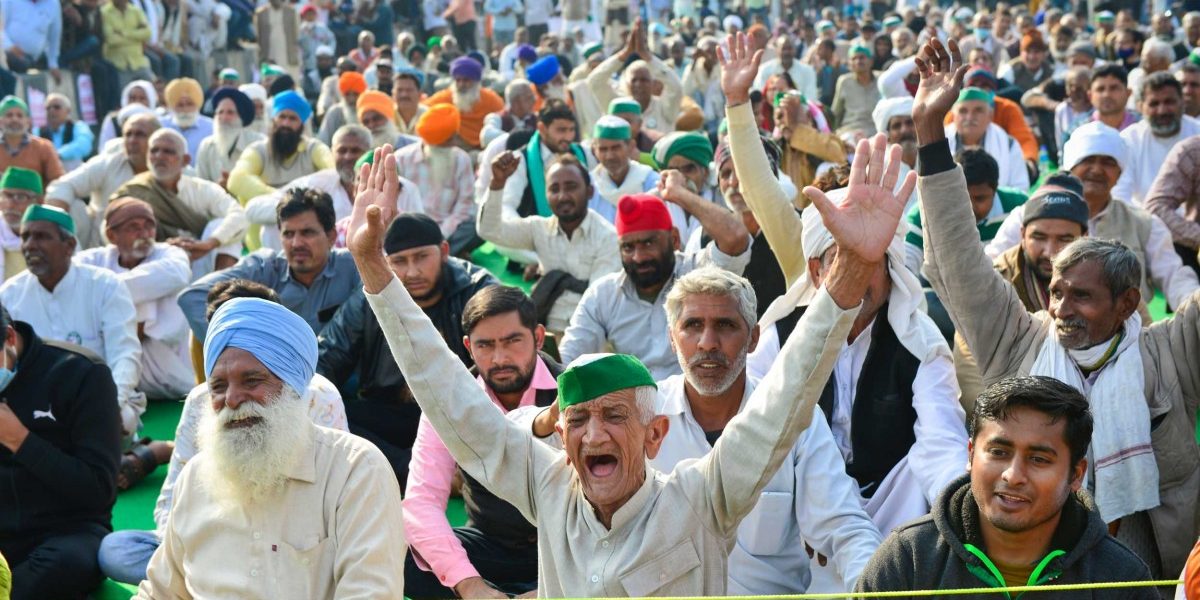 Ten months is not a short period of time for tens of thousands to be camped continuously at a city’s borders. And yet, most mainstream Indian news channels will have you believe that a) there is no farmers’ protest, or b) a ragtag group of ruffians pretending to be farmers is holding up traffic at Delhi’s borders. As a resident of Delhi who has by now made over a hundred trips to Delhi’s periphery to document the stories of these farmers, I have compiled a list of 10 questions city folk tend to ask most frequently about this protest, along with my answers:

1. Is the farmers’ protest still on?

Yes, very much, and it is showing no signs of dissipating any time soon.

2. But I heard the borders have emptied out and no one is there anymore.

Several thousands of farmers continue to camp in tractor-trolleys, tents and makeshift bamboo huts at Tikri and Singhu borders. (At the Tikri border on Rohtak road, the caravan is 21 km long.) At the Ghazipur border near Ghaziabad and Shahjahanpur on the Haryana-Rajasthan border, the numbers are a little lower, as farmers have gone to their villages to work on their farms and prepare for the harvest, but once that is done, the numbers will swell again.

3. But how is farming happening if the farmers are sitting at the borders?

Not everyone from the villages is at the borders. Farmers in different villages have made schedules and rosters, and take turns attending the protest. While some go to the protest, the others fill in for them on the farms. At the moment, a lot of elderly farmers are sitting in protest while the younger ones are working on the farms. It would be safe to say that by the time November comes around and the protest completes a year, these borders will fill out again.

4. Why exactly are the farmers protesting?

The farmers are protesting against three laws that the Union government passed rather hastily (some would say, in violation of rules) at the height of the pandemic in June 2020. These laws, which favour private corporations, do not bode well for an already distressed agricultural sector.

The ‘Mandi Bypass Law’ allows private companies to set up parallel mandis that the farmers fear will make the existing government mandis redundant and leave them at the mercy of corporate houses who will eventually force them to sell their produce at throwaway prices.

The ‘Essential Commodities Law’ allows the hoarding of essential commodities. It also gives private parties the freedom to stock as much agricultural produce as they want.

The ‘Contract Farming Law’ gives corporate players inordinate power and control over the farmers they enter into contracts with. It also gives private players a shocking amount of legal impunity. In case of disagreements, farmers will not be allowed to appeal to the judicial system for justice, but only to sub-divisional magistrates (one of whom recently ordered that the farmers’ heads in Karnal be broken open).

The farmers also want a fair Minimum Support Price or ‘MSP’ to be paid to them for growing their crops. They want MSP to be made a legal right. The new farm laws are, in many ways, the last straw for a farm sector which has seen over 3.65 lakh farmer suicides since 1995!

5. By camping at the borders, aren’t the farmers blocking traffic and causing great inconvenience to commuters?

The police and security forces are the ones who have blocked the highways to prevent the farmers from coming into Delhi and protesting peacefully for their rights. The protestors, on the other hand, have set up camp in such a way as to leave ample room for traffic to pass as freely as possible, especially ambulances and other vehicles performing essential services.

Those who complain about the ‘inconvenience’ caused by traffic diversions fail to see that the farmers are not sitting on their roads because they want to, but because they are compelled to. They have no other way to convince the government to take back laws they never wanted in the first place. For them, it is a matter of survival as farmers. 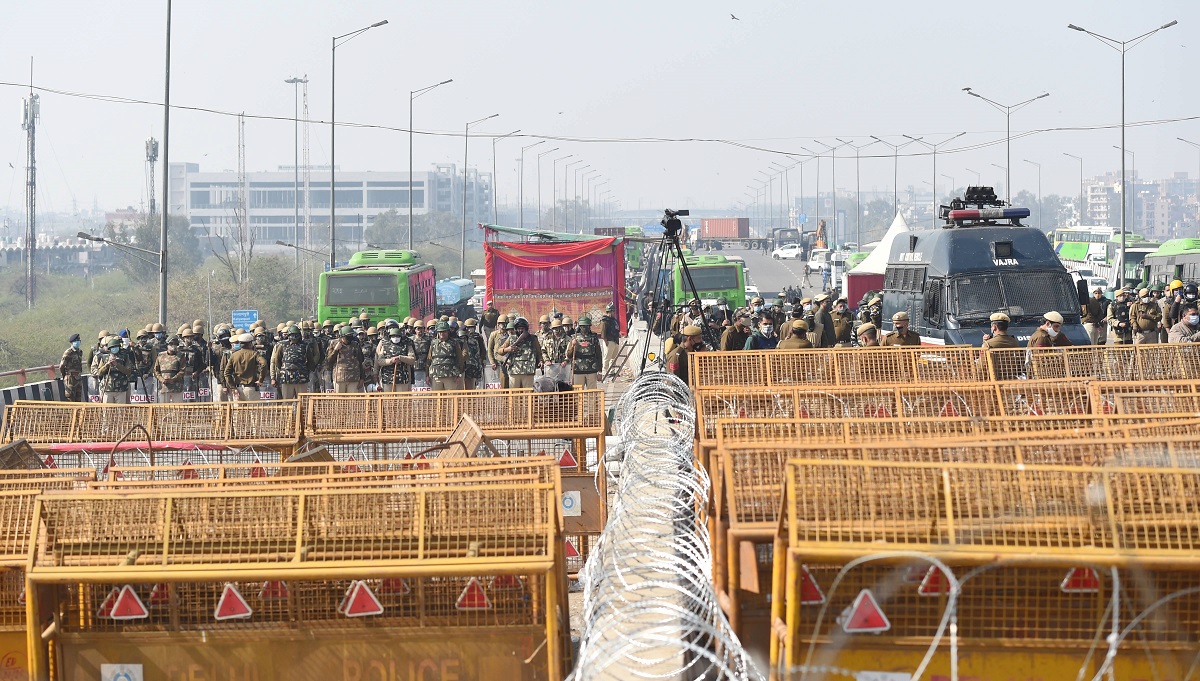 Security personnel stand near barricades ahead of the proposed ‘chakka jam’ by farmers at Ghazipur border in New Delhi, February 6, 2021. Photo: PTI/Manvender Vashist

6. Aren’t these protests dying down?

On the contrary, they are picking up momentum. ’Mahapanchayats’ (huge gatherings of farmers) are being held in several towns. The Muzaffarnagar mahapanchayat on September 5, for example, saw over 10 lakh people get together and demand the ouster of the BJP from Uttar Pradesh. The protests are slowly spreading across India, and farmers from Maharashtra, Gujarat, Rajasthan, Telangana, Tamil Nadu, Kerala, Assam, and Manipur have begun expressing their solidarity and support in large numbers as well.

7. How can the farmers stay at the borders for so long? Who is supporting them?

The farmers have come prepared for the long haul. They have brought weeks, if not months, worth of vegetables and other foods from their villages. They also receive support from their better-off counterparts and other well-wishers across the country who donate the essentials needed to sustain them.

8. Are opposition parties leading these protests?

No, these protests are being coordinated by the Samyukt Kisan Morcha (SKM), a body of approximately 40 farmer unions led by farmer leaders and activists like Darshan Pal Singh, Kavita Kuruganti, Hannan Mollah, Rakesh Tikait, Yogendra Yadav, Balbir Singh Rajewal and others. SKM has made a conscious decision to keep mainstream politicians at an arm’s distance.

At the recent ‘Kisan Sansad’ held in New Delhi, for example, opposition leaders were not given a platform to speak on the farmers’ stage. They were, however, welcome to attend the farmers’ parliament as visitors and observers. In the case of the West Bengal elections, various farmer representatives toured West Bengal and exhorted the voters to vote for anyone but the BJP.

9. Why don’t the farmers agree on a compromise? After all, how long can they stay at the borders?

Eleven rounds of talks between the SKM and the government have come to nought. While the government says that it is willing to make ‘amendments’ to the laws, the farmers say that amending laws that are fundamentally flawed and exploitative is an exercise in futility. As one of the farmer leaders said, “They want to keep the box intact and change the contents inside a bit. But we say the box itself is bad and as long as that remains, our future as farmers is in jeopardy. Nothing short of a complete repeal is acceptable.”

The farmers have made it abundantly clear that they will stay till the laws are repealed. They are ready to stay on till the 2024 general elections if necessary, and even after that if needed. As they often say, ‘We will stay as long as we have to. We will win because we are not in a hurry.”

Although it is difficult to see so many people  (especially the elderly) living in such hardship, there is something profoundly inspiring about the sight of tens of thousands protesting in a Gandhian, non-violent manner. The soul of India is alive and well. You will find one of its purest expressions on the outskirts of the national capital.