A Day in the Life of India’s E-Waste Workers 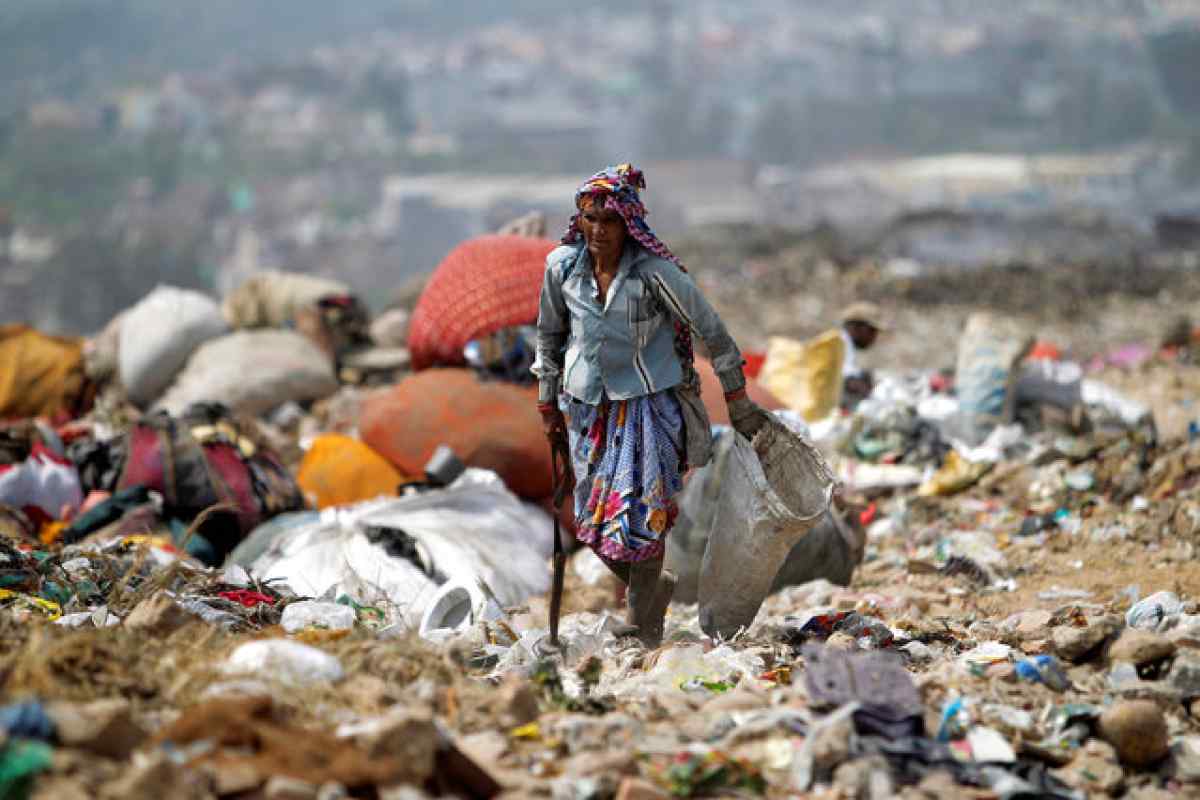 New Delhi: As dawn breaks, hundreds of men move in and out of the congested alleys of Seelampur, pulling carts and driving dump trucks loaded with discarded cellphones, computers, air conditioners, and almost any other electronic waste imaginable. Located on the outskirts of New Delhi, Seelampur is the country’s largest market dedicated to dismantling old tech, and it’s home to an estimated 50,000 men, women, and children whose livelihoods depend on e-waste.

Inside the labyrinth of alleys, hundreds of small establishments are packed with different electronic gadgets, which workers take apart mostly with their bare hands, a hammer, and pliers, hoping to extract precious metals like gold, silver, and tin – or any other useful item. Children move through the nooks and corners of the market with plastic bags on their shoulders, collecting potentially useful scraps among the e-waste leftovers piled in front of doorways.

Aftab, 15, is one of them. He waits patiently along with four or five other children in the scorching heat to collect the e-waste leftovers, things like cellphone displays and broken batteries. (This year, Delhi recorded its hottest June in three years, with average maximum temperatures registering around 40°C Celsius.) “I mostly used to start my day before sunrise to avoid this unbearable temperature, but that was when I collected copper pipes. Since they were heavy, my shoulder used to lock and started to hurt,” said Aftab, wiping the sweat from his face. “Now I prefer to collect cellphone leftovers like cameras, electronic chips, and keypads, which are easy to carry but are less profitable and available mostly during the daytime.”

The world dumped a record of 53.6 million tons of e-waste in 2019, out of which just 17.4% was recycled, according to the 2020 Global E-waste Monitor. India, for its part, produced 3.2 million metric tons of e-waste – much of which ended up in Seelampur. India also serves as a dumping ground for e-waste from other countries, like the US, through a “complex web of transshipment ports.” A 2017 paper in the Journal of Health and Pollution “estimated that around 50,000 metric tons of e-waste is being imported into India every year.”

That waste fills Seelampur’s busy streets, where establishments specialise in different types of e-waste recycling and disposal – for example, shops focused on cellphones home in on motherboards and batteries, which are more valuable and can be sold to other recycling units. Lacking adequate space and labour force, they throw out other parts, which are collected by people like Aftab, who then sell the scraps in the local market at a cheaper price.

Most of the people who make a living off e-waste live around Seelampur. Aftab lives with his family of five in a tin shed along one side of an open drainage canal, which is filled with stinky, murky water and runs through the market. The oldest of his siblings, Aftab started working with his mother at the age of eight, collecting pieces of wire and then burning them to extract pieces of copper. His mother was forced to stop working after hazardous smoke produced from the burning made her sick several times.

“To be honest, who likes to work here? But we are underprivileged and have no other choice. Every morning I stand in a long queue to fetch a single bucket of drinking water. I consider myself lucky if I am able to get two buckets, and such small things give me happiness, which is normal for others who are not leading the same lifestyle as we do,” said Aftab. “While working I get minor injuries, but I neglect them. If one of us stops working for a day we won’t be able to make ends meet.”

As soon as the leftover cellphone scraps are thrown out, young children waiting outside rush forward, pulling each other back to get the best of it. Aftab collects whatever possible with his bare hands and runs away. Sitting behind a car near the drainage canal, he opens his plastic bag to look at what he collected.

“It’s a rat race here and you need to be very quick in order to survive. On an average day, I earn around Rs 50 to 170 [60 cents to $2.15], and it all depends on what I find,” Aftab said. He likes the privacy of the drainage canal to go over his findings. But at times, the stink is suffocating. “It makes me wonder what it’s like to breathe in the fresh air,” he said.

On a day in mid-June, Aftab was pleased with what he collected. “It was a lucky day, as I found some useful metals,” he said, smiling as he set off toward a snack cart. “Now I can treat myself with a samosa and get some rest.” 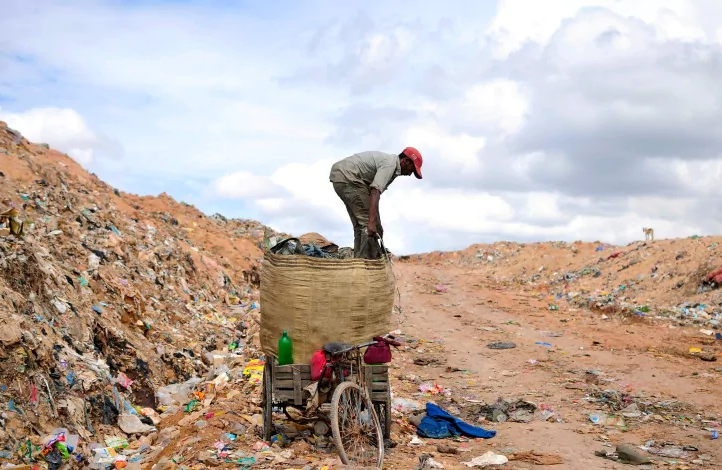 India also serves as a dumping ground for e-waste from other countries, like the US, through a “complex web of transshipment ports.”  Credit: Reuters

In May, India’s Ministry of Environment, Forest and Climate Change released a draft of additional rules for e-waste (and opened the proposal to public comment). If adopted, the rules would set up a new framework to push recycling toward the formal sector (though critics say it could “exacerbate mismanagement”).

These rules are the most recent in a series of efforts to manage the country’s e-waste, which began in 2011 with a legislation “mandating that only authorised dismantlers and recyclers collect e-waste,” according to the 2020 Global E-waste Monitor. A new set of rules in 2016 further emphasised on producer responsibility and set collection targets. And while India is the only country in Southern Asia with such rules, the 2020 report notes, enforcement is a major challenge, due to “the lack of proper collection and logistics infrastructure, limited awareness of consumers on the hazards of improper disposal of e-waste, the lack of standards for collection, dismantling of e-waste and treatment of it, and an inefficient and tedious reporting process.” Places like Seelampur, where around 80% of dumped electronic gadgets are recycled, are preferred over formal sectors, thanks to the cheap availability of recyclers and dismantling costs.

Just a few meters away from the main road that leads to the market, Rashim, 30, is clearing the road for his van, filled with discarded cellphone chips and motherboards. Rashim came to Seelampur from Meerut, a city outside of Delhi, in 2011. He started as a labourer, unloading scraps throughout the market, and he now runs a business dealing with discarded cellphones.

“My journey in Seelampur has been full of ups and downs, but at the same time, God has been kind to me. When I came here I never thought I would own a shop, but everything is possible if one works hard. I only deal with discarded cellphones as they are easy to dismantle and don’t cause many health hazards,” said Rashim, sitting on a chair inside his shop, where he employs three people. His employees extract motherboards and other chips from cellphones and send them for further processing. “I earn around Rs 1,000 to 1,500 [$12 to $15] on a normal day, and that’s not sufficient when you have a family of six and other responsibilities,” he said.

At Rashim’s shop, a worker looks for broken motherboards that can’t be sent for further processing. Without protective gear, he dips them in a beaker filled with acid, hoping to extract copper, silver, or other metals that can be sold. Soon after, the small shop fills with clouds of white smoke. “No doubt we are at constant risk here, but what other option do we have?” says Rashim, covering his nose and mouth with a piece of cloth.“I suffer from breathing issues at this young age, but I can’t stop working because I have a family to look after. We need high-end safety gear to deal with this kind of work, but it’s way out of our budget.” Wearing a simple mask, he said, would make breathing more difficult in the suffocating heat.

Rashim, who is fond of thriller TV shows, watches a local Indian serial on his smartphone while his oldest son, a young teenager, shows up with a tiffin, or lunchbox. Rashim makes sure his son doesn’t play or touch anything at the shop, buys him candies, and then quickly sends him home. “I get nightmares of my children doing the same job – that’s why I don’t let them spend much time here,” Rashim explains, clearing a small plastic table for lunch. “I pray every day that they don’t land in this place.”

Taj, a doctor popular in the area, has been working in Seelampur for ten years. Each year, he said, things get worse. “Until the last few years, I used to see five to 12 patients in a day, now they have risen to 20 or 30,” he said. Most of the cases, he explained, are related to skin infections and chronic obstructive pulmonary disease.

Taj cited a lack of awareness among e-waste workers about the causes of these health issues. “They burn wires, plastics, and parts of regular appliances, and dealing with hazardous chemicals is the cause of growing COPD cases in the area,” he said. “I see cases of small children with COPD and breathing issues, which would indefinitely affect their lifespan, and it’s really worrying.”