2021 Polls: What Does Data on Land Conflicts in Bengal, Assam, Kerala, and Tamil Nadu Show?

Issues of land acquisition and land rights are especially contentious in Tamil Nadu and West Bengal and feature prominently in poll promises being made by the incumbent parties.

Voters show their ID cards as they arrive to cast their votes during the second phase of West Bengal Assembly polls, in Nandigram, Thursday, April 1, 2021. Photo: PTI/Ashok Bhaumik 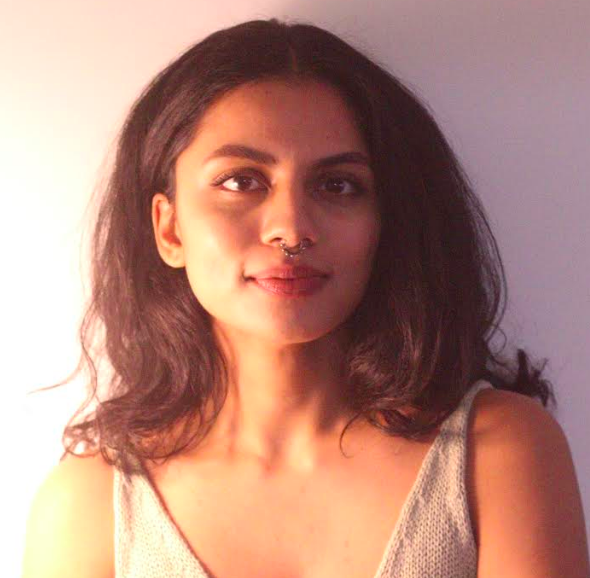 The Trinamool Congress government in West Bengal famously came to office 10 years ago following the party’s vocal support for communities involved in the Singur and Nandigram land conflicts.

In Singur, the incumbent CPI(M) government had acquired land without the consent of landowners, and allotted it to Tata Motors Limited to build its Nano car factory. Trinamool leader Mamata Banerjee went on a hunger strike in 2006, which galvanised the movement against the factory, forcing the company to abandon its project and eventually ended the CPI(M)’s 37-year old government.

As West Bengal goes to the polls, it is worth asking: how did the Trinamool Congress government led by Banerjee as chief minister fare on land conflicts in its own 10 years of tenure? Did it also cause land conflicts? Were these conflicts over industries like the Nano factory? Did the government try to resolve them?

Contested Grounds, an analysis of land conflicts in the four states going to polls in March-May 2021 – West Bengal, Assam, Kerala, and Tamil Nadu – seeks to answer these questions. The analysis has been prepared by Land Conflict Watch (LCW), an independent network of researchers studying natural resource conflicts in India, and is based on data from LCW’s database of nearly 800 ongoing land conflicts in India.

The full report, which includes detailed state-wise analysis and downloadable data, is available here. This article lays out summaries of its findings.

LCW defines land conflicts as “any instance in which the use of, access to, and/or control over land and its associated resources are contested by two or more parties.” This excludes conflicts between private parties unless the conflict has an underlying public interest. Conflicts are reported by 30+ data researchers located across India.

The report is based on data from 18 conflicts from Assam, 17 from Kerala, 15 from Tamil Nadu and 17 from West Bengal, all which have been updated as of early 2021. The database does not yet have any land conflicts from Puducherry as yet (inform us here if you know of one).

The analysis is based on 12 parameters measured for each conflict such as starting year, cause of the conflict, economic sector involved, legal framework, legal loopholes, and human rights violations. It also captures information on resolution of conflicts and the role played by courts in the process.

What did we find?

The analysis finds that each of the four states going to polls has unique and varied issues causing and escalating land conflicts.

Eight conflicts began in West Bengal during the Trinamool government’s tenure, while the government resolved two conflicts. Coal mining is a major cause of conflicts. There is more on this in the state-specific sections below.

More than half of the conflicts in Assam demonstrably originate from the idea of the “other” – ranging from the eviction of forest dwellers termed as encroachers or the targeting of immigrant settlements through eviction drives. 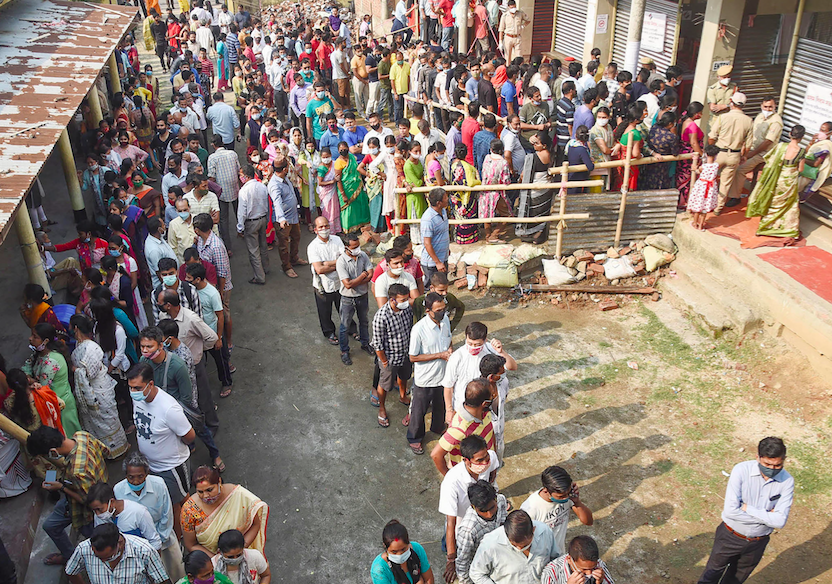 Citizens stand in a queue to cast their votes at a polling station, during the third phase of Assam Assembly elections, in Guwahati, Tuesday, April 6, 2021. Photo: PTI

Tamil Nadu and Kerala are struggling with conflicts caused by environmental degradation and poor implementation of environmental laws.

Issues of land acquisition and land rights are especially contentious in Tamil Nadu and West Bengal and feature prominently in poll promises being made by the incumbent parties.

No state has more than two conflicts which have been resolved, and the cause of resolution is rarely related to the court’s decision.

There are a number of instances in which law enforcement mechanisms have been misused by the state, leading to human rights violations. There are six such reported instances in Assam, four in West Bengal, three in Tamil Nadu and one in Kerala.

There are 17 conflicts from West Bengal in the database. Over 2.2 lakh people and investments worth INR 76,722 crore are affected by the conflicts. Infrastructure is the largest economic sector associated with conflict, with land acquisition being the most contentious issue among reported conflicts. Refusal to give up land for projects and demands for promised compensation are the most prominent demands by affected communities. Coal mining is the leading cause of conflict, with instances such as workers’ demand for compensation from the Durgapur Projects Limited and the demand for jobs and compensation for land acquired for mining by Eastern Coalfields Limited.

Also read: Author Manoranjan Byapari Is on a Mission to ‘Save Bengal’s Soul’ The incumbent BJP government in the state led by chief minister Sarbananda Sonowal has assured that the state would be “free” of those who encroach upon land and protect the identity of those in the state. The party has promised to end what it calls ‘land jihad’ in the state – referring to the long standing conflict between the indigenous Assamese population and Bengali Muslim immigrants – by issuing land pattas to indigenous Assamese communities and evicting immigrants.

Out of 18 ongoing conflicts in Assam in the database, six conflicts started under the tenure of the incumbent BJP government, six under the Indian National Congress governments that preceded it, and four conflicts began under the Asom Gana Parishad government.

Also read: Why Alliance With Ajmal’s AUDF May Not Help Assam Congress Resolve its ‘Muslim Dilemma’

More than 66% of the conflicts involve the forced eviction of families from their homes – many such evictions followed their branding as ‘encroachers’. A number of conflicts in Assam, such as the Sipajhar conflict and the displacement of flood-affected people from riverine areas, have been exacerbated by anti-immigrant sentiment. Eviction drives often target settlements of indigenous communities. 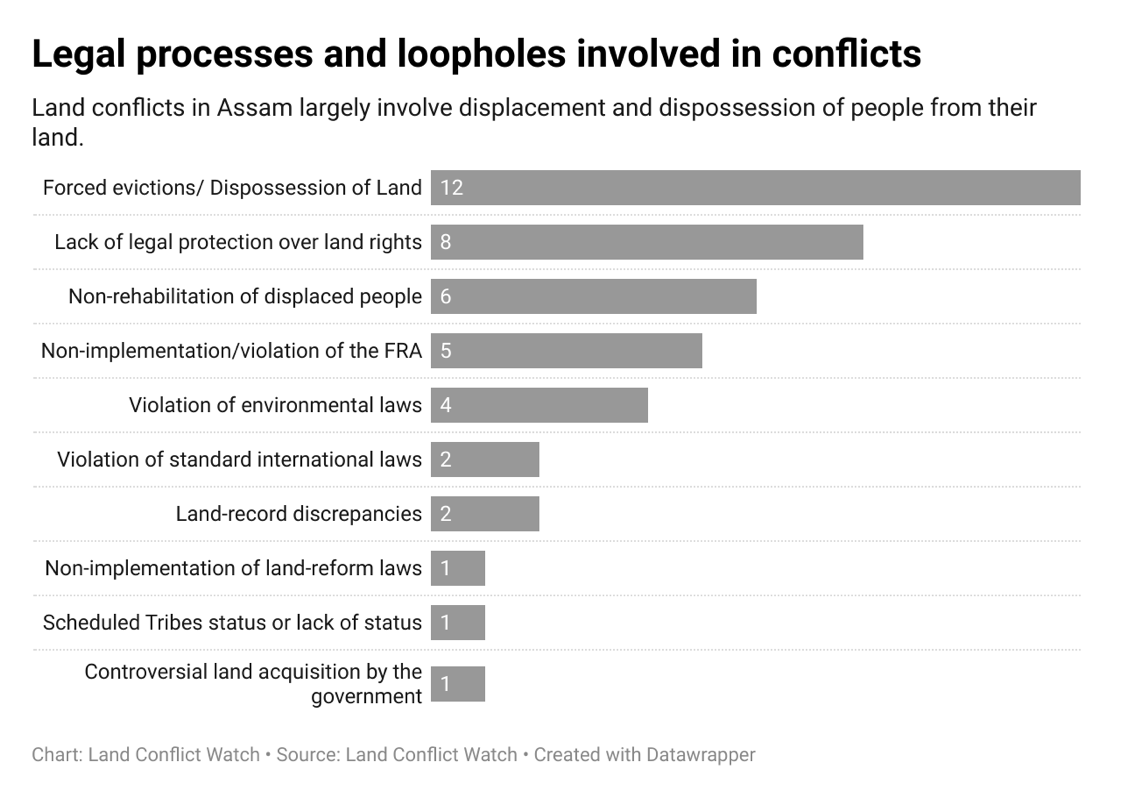 Opposition against environmental degradation is the most prevalent demand by affected communities. Infrastructure is a prevalent economic sector pertaining to conflicts, with a number of instances of controversial land acquisition by the government.

Environmental law is applicable to eight conflicts with six conflicts reporting violations of environmental legislations. Kerala has a significant number of coastal projects – both private and state-funded, that are in violation of the CRZ Notification, 2011.

The construction of apartments and seaports and sand mining have led to an increased risk of coastal erosion which harms marine ecology and puts coastal residents at risk. 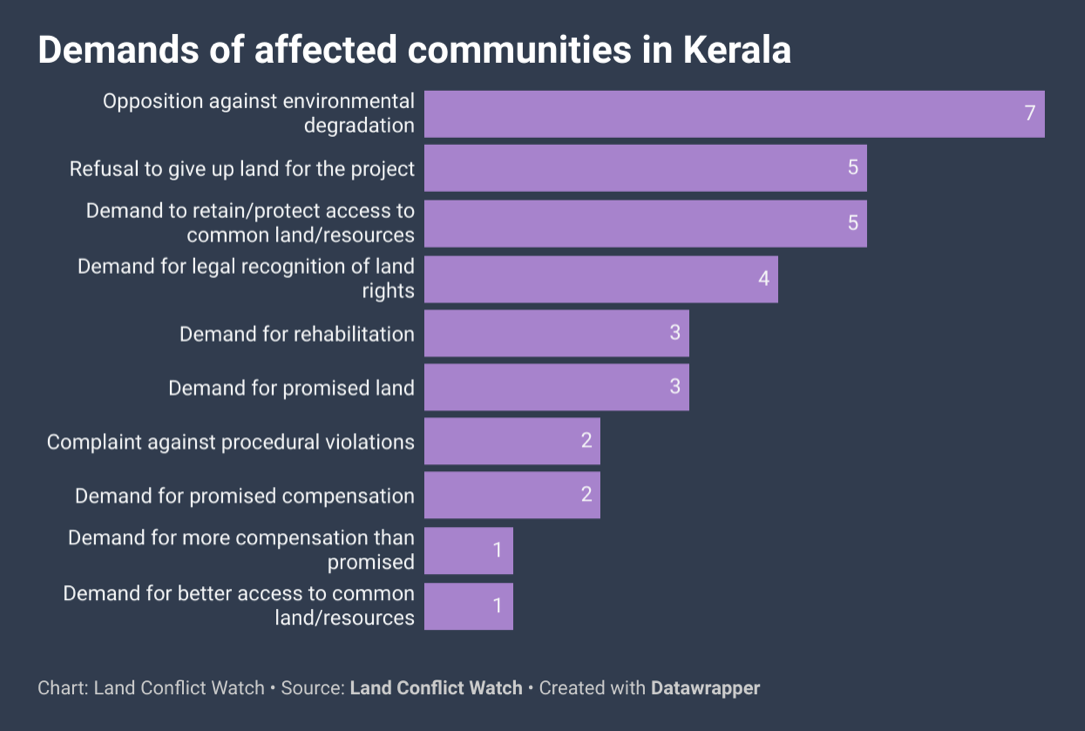 There are 15 conflicts from Tamil Nadu in the database, of which 10 conflicts began during the tenure of the incumbent AIADMK government. The conflicts affect an investment amount worth INR 1,12,565 crore.

Some of these conflicts, such as protests against the Adani port expansion at Kattupalli and demonstrations against Sterlite copper smelter plant in Thoothukudi where 13 people were shot dead by police in 2018, were covered widely in the media.

The State Industries Promotion Corporation of Tamil Nadu (SIPCOT), a state government entity, is responsible for the largest number of reported conflicts from Tamil Nadu. Delay in acquisition is a common trend across conflicts pertaining to both SIPCOT and other government entities such as the Airports Authority of India.

Two conflicts have ended. In one, the Madras High Court allowed the takeover of land in Thiruvallur for an Industrial Park. At Krishnagiri, protests against land acquisition by SIPCOT died down. Deputy chief minister O Panneerselvam of the AIADMK has now promised that it will scrap projects such as the expansion of the Adani and Kanyakumari ports, if it is voted back to power. 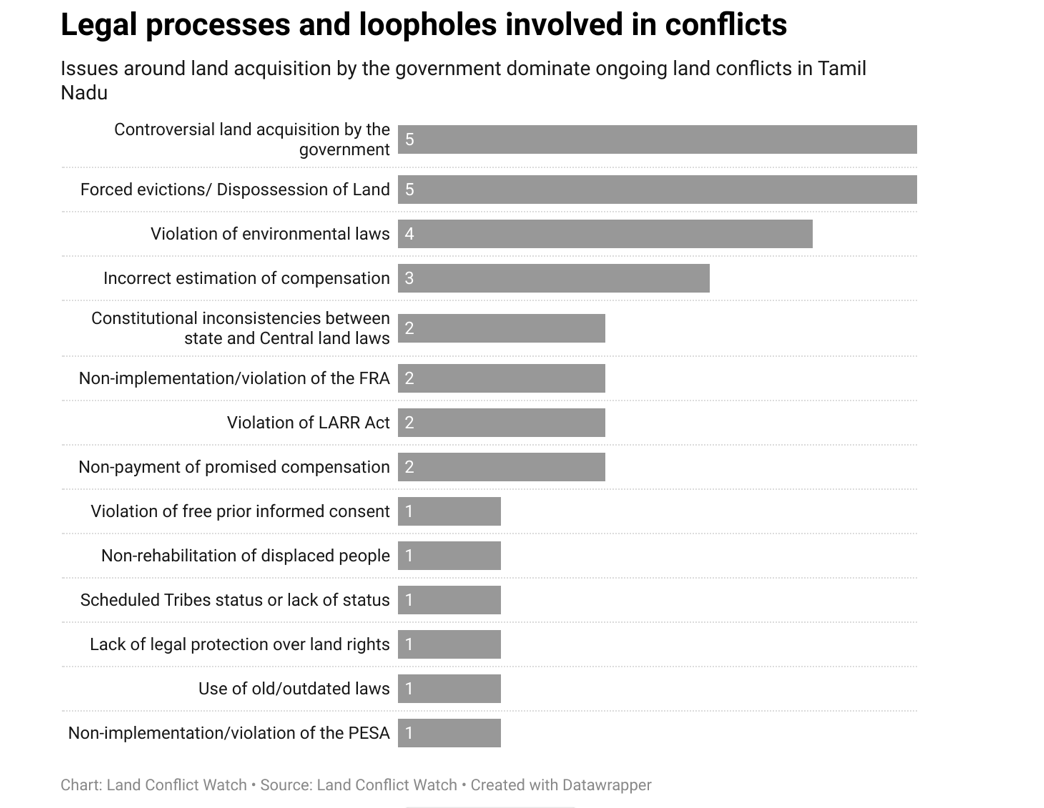 Mukta Joshi is a lawyer with Land Conflict Watch and tweets at @mukta_jo.