A childless couple near Kanpur in Uttar Pradesh killed a six-year-old girl, believing they would be blessed with a child if the wife consumed the organs of a girl-child on Diwali night. 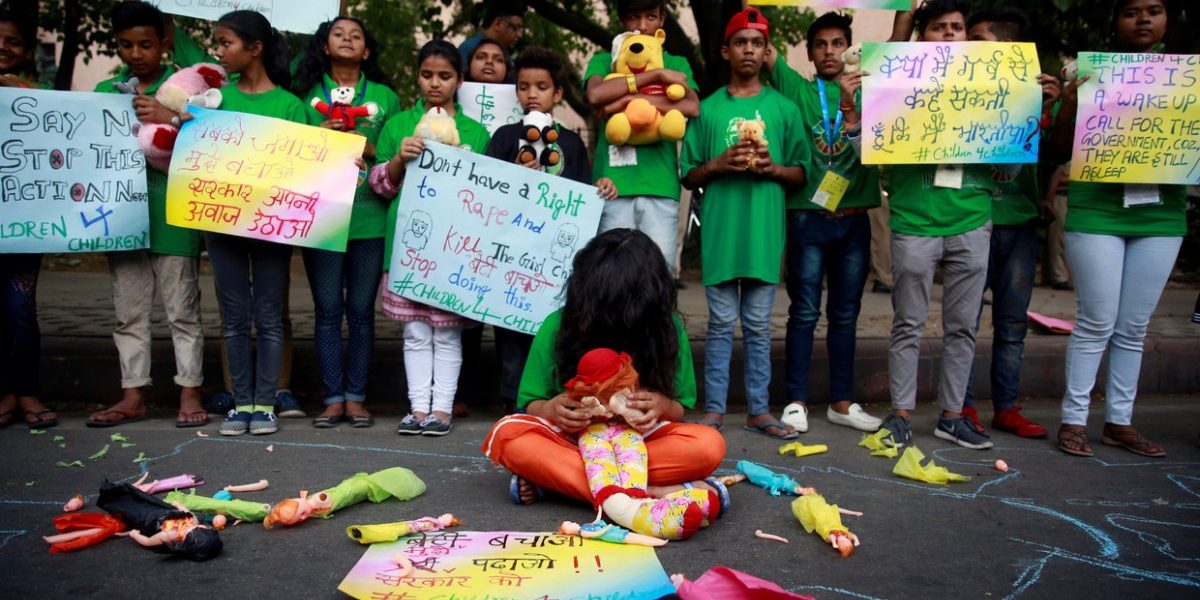 Children take part in a protest against the rape of an eight-year-old girl, in Kathua, near Jammu and a teenager in Unnao, Uttar Pradesh state, in New Delhi. Image: Reuters/Cathal McNaughton/Files.

Named after Bhadrakali, whose ancient temple is near its fields, Bhadras is a village of more than 4,000 houses, just off the main highway, 30 kilometres from Kanpur. It is located in an area that used to be a stronghold of the Arjak Sangh, which opposed superstition and the caste system.

But that was some decades ago.

Close to the entrance of the village is the ‘Chamar’ tola, which has about 25–30 homes. Some of them are pukka, the others are semi-pukka houses. Diwali has left their walls newly white-washed and their floors freshly covered with cow dung mixed with earth. Diwali has also left the tola bruised, divided and branded with the memory of an act of unimaginable, incomprehensible brutality.

The lighting of diyas on Diwali night (November 14) was to take place between 7 pm and 8 pm. It was just before this that Bhuri (Shreya) went missing, and accompanied by my colleagues from the All India Democratic Women’s Association (AIDWA), Neelam and Seema, I went to Bhadras yesterday (November 20) to try and understand the horrors that overtook that child of six.

At the entrance of the tola is a fairly large open space, part of which is covered with bricks. Several homes open onto this and this is where the children play all day and late into the evening. During the day, the men sit around drinking tea, smoking beedis and talking. All India Democratic Women’s Association members interacting with Bhadras villagers in connection with the killing of a six-year-old girl for a tantric practice. Photo: Special arrangement

When we arrived, there were no children to be seen but many of the men were sitting in the sun. We joined them and introduced ourselves. There was some curiosity and no ill-feeling. Only one of the men, Fakire Lal, had benefitted from a government job from which he was now retired. He had been the pradhan of the village earlier. He was a little guarded to begin with, but when he realised who we were and that we were ‘communists’, he was very forthcoming and told the other villagers that it was fine to speak with us since we fought for the rights of Dalits.

There was one middle-aged and one old woman in the group, and we were soon joined by a most enchanting young girl.

What happened on that Diwali night was described, elaborated and corroborated by everyone there and by those that we met subsequently.

All the families in the tola, many of them related, are close to each other.  They know each other’s children who play together and are in and out of each other’s homes.

On the evening of November 14, the women of the tola were busy getting ready for the evening puja. They were cleaning and cooking and preparing the diyas. The children were playing outside and most of the men were either coming back from work or sitting at the ‘canteen’ outside the village, where liquor is sold. Suddenly, just before 7 pm, Rampyari realised that her little daughter, Bhuri, was missing. She went around the tola enquiring about her.

Soon anxiety about the missing child grew and she was joined by other women. Together, they went to every house – all the doors were open as usual – and looked for the child. Swati, a year or so older than Bhuri, told them that she had seen Bhuri following Ankul, known as Haula, a little earlier because he was promising her a packet of Kurkure (a savoury snack).

Haula, an orphan, lived with his sister, Arti and younger siblings, but spent very little time at home. Arti was the young woman who had joined us in the courtyard. She told us a lot about her brother, who she said, never gave any money that he earned to his family but insisted on eating with them.

Sanjay, a younger brother, worked as a labourer and supported his family with his meagre earnings. There were two older brothers who had left for Surat many years ago and they helped with money, especially at the time of festivals. Haula, she told us, was bad-tempered and best avoided because he was prone to hitting out at her. Others in the courtyard agreed with her and one of them told us that Haula was light-fingered and often pinched money from people without ever getting caught. He also had a drinking habit.

On Diwali night, Haula came home just after 7 pm and most unusually for him, took his clothes off and put them into a bucket of water. Usually, he dumped clothes on the floor confident that washing them was his sister’s job.

Strangely, it was his new clothes for Diwali that he put in the bucket before changing into old clothes.

Just then, Rampyari and her friend, Ramdevi arrived outside Haula’s home to ask about Bhuri, repeating what Swati had said. Haula retorted that he had no idea that Bhuri was following him. After this, Haula and his uncle Parshuram and aunt Sunayna went together to Swati’s house and abused her family. Haula said that if anything happened to him, he would ‘eat them all alive’, and Sunayna said that if he came to any harm she would see to it that he shot them all dead. 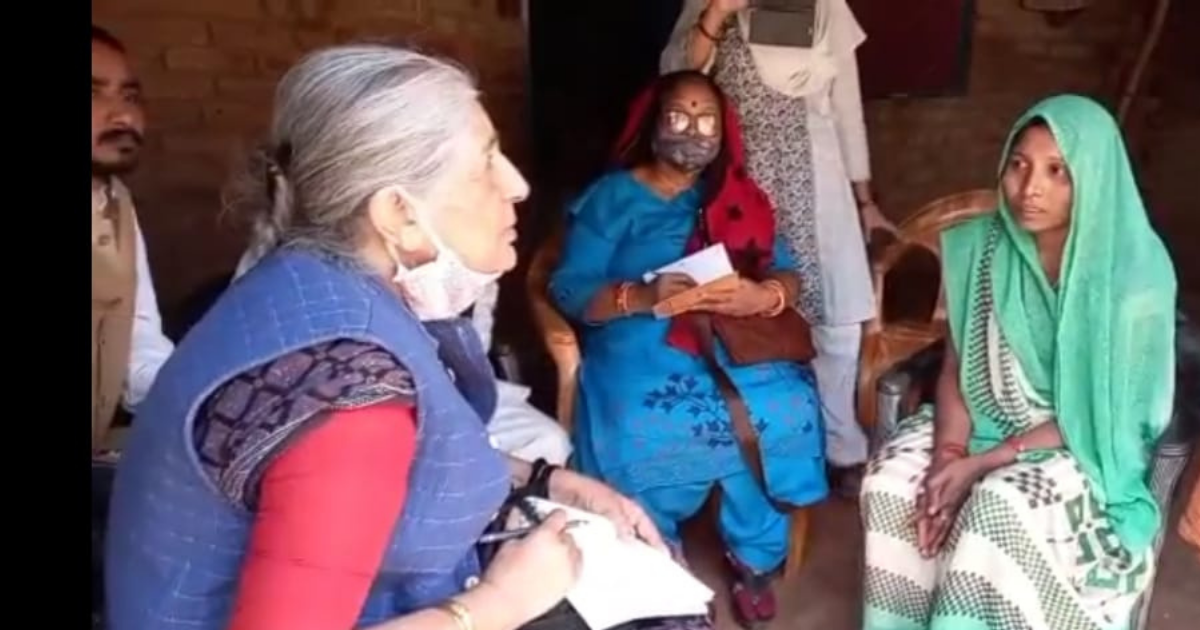 Rampyari and Ramdevi told us that they went again to Haula’s place and they found Sunayna and Parshuram sitting there while their own home, next door, was locked. They were too distraught to pay attention to this, although it was well-known that the aunt and uncle were only close to Haula and not with his siblings. They never went to his house and their own house being locked on Diwali night was strange. In hindsight, Rampyari and Ramdevi wish they had insisted on opening the locked house. They think that, perhaps, they did hear some sounds from behind the locked door.

More and more people of all communities joined in the search for Bhuri, gripped by concern and fear that vanished celebration from their minds. Only Haula, his aunt and uncle and another young man, Biran, did not join in.

Also read: India, a Killer Country for the Girl Child

Finally, at 11 pm, Bhuri’s father, Karan alias Ravinder contacted the police. He also went to the Bhadrkali temple beyond the fields in which the new crop was barely a few inches high, concealing nothing.  The priest made an announcement about Bhuri’s disappearance from the temple’s loudspeaker.

The police arrived promptly despite it being Diwali. After joining the villagers in their search for some time, they asked Karan whether he had any enemies in the village. He was surprised because he had none. When the questions persisted, he mentioned that he had tried to pacify Biran and another man who were arguing at the ‘canteen’ (liquor vend) two days earlier. Biran had abused him for his pains.

The police picked up Biran and took him to the police station. His mother was present in the group in the courtyard and she told us that Biran did drink and that evening, he had come home and fallen into a deep slumber from which he was only rudely awakened by the police. A few others were also taken away. Apparently, they were given a taste of ‘UP police-style interrogation’.

The next morning, at about 6 pm, two young women who had gone into the fields to relieve themselves shouted that they could see something that looked like a body in the field. Karan had gone to the temple to have another announcement made and he ran towards where the girls were pointing.

Biran responded to the police interrogation and said that he and Haula had killed the little girl. (The police report says that she had been raped by them too). They had been paid a sum of Rs 1,500 by Parsuram and Sunayna to kill a young girl on Diwali night and bring them her organs.

Parsuram, Sunayna and Haula were immediately arrested from the village. Parsuram said that he had bought a book near the Kanpur railway station which stated that a childless couple would be blessed with a child if the wife consumed organs of a girl-child on Diwali night. Sunayna said that she had eaten the organs – some raw, some cooked and some rolled in a roti. What was left, she fed to some dogs.

Also read: No Country for Women

The people in the courtyard told us that while Haula was a suspicious character and Biran was not a very pleasant person, neither was a criminal. Sunayna and Parsuram were also ordinary people. The only thing unusual about them was that they were childless in a tola where every home seems to have more than three children. They gave sweets to the children quite often and little Bhuri had gone to their home more than once with her mother and Ramdevi. Once she had even fallen asleep there because they had a fan in the house, a rare luxury in a village of daily wage earners like her own father.

At a time when superstitious beliefs and unscientific thinking are being purveyed like never before by the media, when channels are stuffing the minds of their audience with miracles attributed to black magic, observance of certain rituals and complete belief in the occult and supernatural, ordinary people are found committing extraordinary crimes.

We spent a few hours with Karan and Rampyari. Our words of comfort were inadequate in the face of such grief, such horror, such disbelief in what had happened to their child and to them. They are very poor. They have received a cheque for Rs 5 lakh compensation from the government which remains uncleared in Rampyari’s account, and according to the bank, it will take 20 days to be cleared.  Meanwhile, there is no food in the house and there are four hungry children and two adults. The other villagers are sympathetic and sorrowful but have no money to spare.

What they did have was a sense of community that allowed their children to play together through the day and late into the evening. Even that has been snatched away from them.