Bengal: From Schemes to Speeches, TMC Has Made the Woman Voter the Focus of Its Campaign

For the upcoming assembly election, TMC's campaign has been growing aggressive and women are at centre of it. 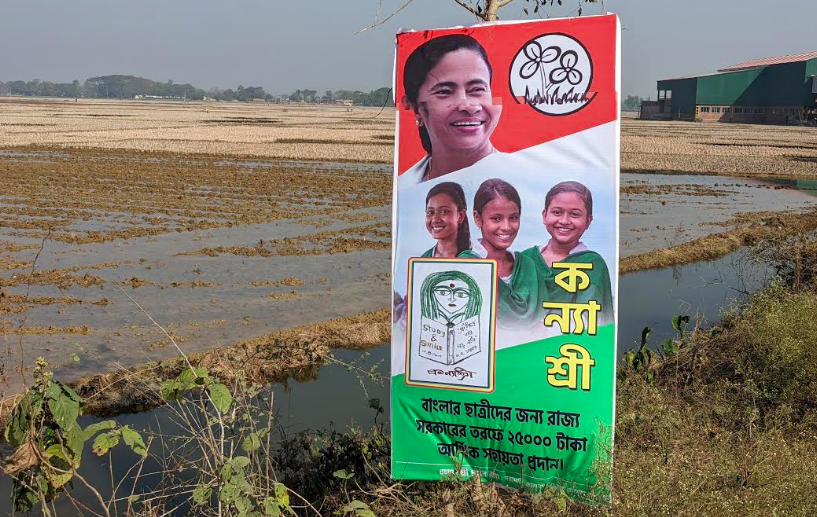 Already frail, Karmakar, who lives in Arbelia village, said, “My chief minister is visiting my village. I will naturally come to see her. She is the only person who cares for us. We will always be by her side.”

Like in Banerjee’s public meeting at the Baidyapur Sports Ground in Kalna on Tuesday, February 9, most of her rallies have a large number of women present. Trinamool Congress, too, appears to be aware of this because the branding for such rallies is targeted at women.

Cut outs are placed on roadsides, highlighting state government’s various schemes. These boards only have women’s faces along with Banerjee’s.

And then there is Banerjee’s speech. In her 34-minute speech at Kalna, the Bengal chief minister said, “Maa-boneyra” or ‘mothers and sisters’, 23 times. 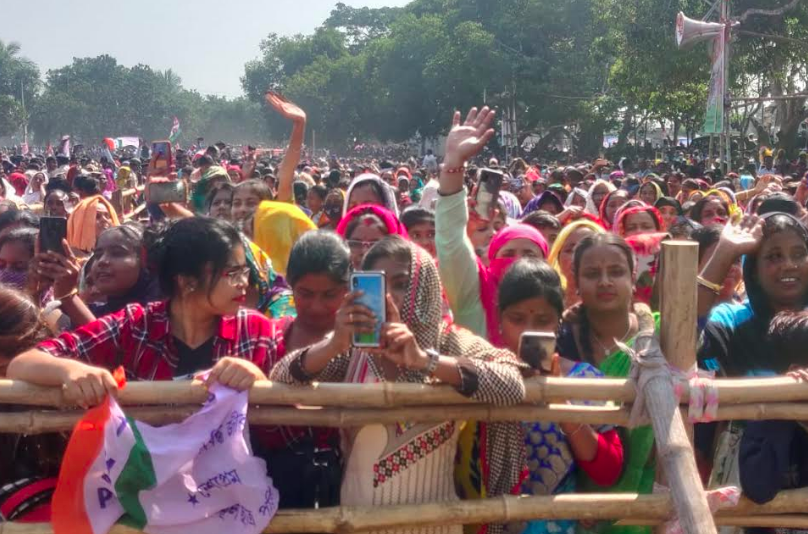 Women at a TMC meeting in Kalna. Photo: Himadri Ghosh

For the upcoming assembly election, TMC’s campaign has been growing aggressive and women are at centre of it. The ruling party is aware of the role the women vote bank could play in this election, just like the recently completed Bihar poll.

Last month, the Election Commission of India (ECI) released the final electoral rolls for the 2021 assembly elections in the state. According to the new draft rolls, the total number of voters in the state are 7.32 crores, among whom 3.73 crore are male, and 3.59 crore, female. Women at a TMC meeting in Kalna. Photo: Himadri Ghosh

In the 2019 parliamentary election, TMC was the only party that nominated women in more than 41% of the seats it contested. Seventeen out of its 42 candidates were women, a number higher that the 33% mark.

The Bharatiya Janata Party has, meanwhile, mobilised its Mahila Morcha in the state, proving that the election could well play out on the crucible of gender politics.

TMC’s appeal to the women electorate is not just limited to campaigns and speeches, the Banerjee government over the past 10 years has specifically targeted women and girls through its policies.

The most talked about among them is Kanyashree scheme launched in 2013, which provides cash handouts to girls between 13 and 18 provided they remain unmarried and in school. The broader aim of the scheme is to to prevent child marriage and reduce school drop out rate among girls. The scheme also won the United Nations Public Service Award at The Hague in 2017. Another scheme called Rupashree, launched in 2018, provides a one-time financial grant of Rs 25,000 for economically stressed families at the time of their adult daughters’ weddings. This scheme too aims to deter child marriages.

Swasthya Sathi, the health insurance scheme, offers a family health card issued in the name of the household matriarch. “Through her policies she (Mamata) is breaking the patriarchal structure of our society and bringing the women to the the forefront,” state minister Chandrima Bhattacharya said.

Also read: ‘We Will Vote for Didi’: Mamata Banerjee’s Nandigram Rally a Show of Strength for TMC It is not just the chief minister, all party leaders are focusing on the women voter. Birbhum district president Anubrata Mondal, in all his block-level meetings, spoke to women party workers separately and urged them to be more active on ground.

In North 24 Parganas, TMC leaders are pushing their women’s wing when it comes to conducting local rallies. “The women’s wing is an important part of our party structure. A large number of women participate in our roadshows and public meetings. Women are the biggest beneficiary of state government’s policies and naturally they are with us,” a TMC MLA from North 24 Parganas told The Wire.

“Many governments talk of women empowerment, our government actually did it. Representations for women in panchayats changed a lot in our rural villages, today women-centric issues are acknowledged and resolved more than ever before. Women participation in MGNREGA in Bengal is highest in the country,” women and child development minister, Shashi Panja told The Wire.

While speaking at public meetings, many TMC leaders attack BJP as an anti-woman party and highlight crimes against women in BJP-ruled states like Uttar Pradesh.

Thirty seven-year-old Swapna Bag, who came to attend TMC’s meeting at Kalna from Singarkon village, said “Why will we support anyone other than Didi? She is the only women chief minister in the country. We need her in Bengal.”

Shuli Mondal, 43, another spectator at the Tuesday event, said, “We support her because she is a woman and she cares for all, especially women.”

In TV debates and street corner meetings, TMC leaders stress on National Crime Record Bureau (NCRB) data which has declared the state capital one of the safest cities in India for two consecutive years.

Reservation for women in panchayats has expanded from 33% to 50%, the state government claims and the number of elected women representatives is 30,157 today, compared to 21,351 in 2008.

Since 2011, more than 6.7 lakh self-help groups were set up, providing self-employment to nearly 90 lakh rural women with Rs 38,914 crore worth of credit sanctioned, the Bengal government claims.