Apart from ensuring there are no congregational prayers, Muslims need to be in touch with area officials and hospitals for up-to-date information and help people and communities physically close to them. 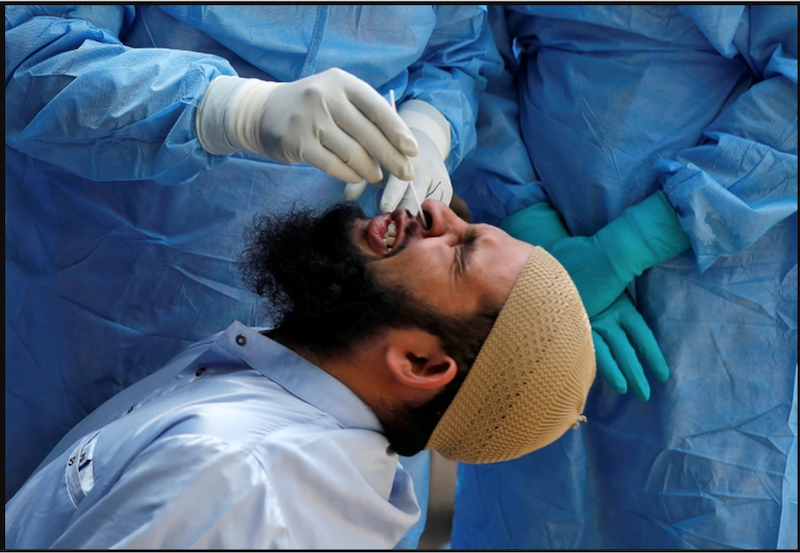 A man reacts as a doctor takes a swab from him to test for the coronavirus at a residential area in Ahmedabad, India. REUTERS/Amit Dave

Whatever anyone may think about the government of India’s response to the global COVID-19 pandemic – that it was unprepared and perhaps even negligent is the least one can say – the bottom line is that the country is headed towards a crisis of historic proportions. We are looking at possibly millions of positive cases and thousands of deaths.

What this means is that individuals, groups and communities need to support each other in this time of extreme difficulty rather than falling prey to the virus of suspicion and hate. Above all, each and every one of us needs to act responsibly.

Most Muslim religious leaders are now in agreement that there should be no congregational prayers (namaaz ba-jamaat) till the novel coronavirus pandemic is over. Muslims should know that Kaaba is closed for a month and the Hajj pilgrimage too is unlikely this year. The last time hajj was suspended due to a pandemic was in 1814, when there was plague. So we must understand the gravity of the situation which is unfolding before us. Muslims should not covertly gather in the mosque to offer prayers. It is now evident that a large number of people are asymptomatic carriers of the virus, i.e. the virus sits in their noses and throat without affecting them. The act of cleaning and blowing the nose during wuzu can aersolise the virus which can infect a more susceptible person.  Our elderly (and even some young ones) might argue that no one can stop Muslims to go to mosques even if it means death. We must turn to the Quran which states that: “..And who so saves a (human) life it is as if he has saved the entire mankind.” [Al Maida verse 32]

It is a duty upon Muslims to save as many lives as possible including ours. This means that masjid buildings should be offered as quarantine centres and isolation wards. Muslim localities are usually congested and quarantine/isolation in small homes will invariably risk other household members, especially those who live in joint families. Designating mosques as quarantine/isolation centres will cut down this risk drastically. Community leaders should ask for donation of cots, charpais, and beds and start preparing the masjid for catering to two types of patients. One, for all positive cases or people who need to be quarantined and don’t show any symptoms yet. Two, those who show symptoms – who should be kept in a different part of the masjid so that they accidentally don’t infect the first group who may have false positives or mild symptoms.

Those who are severely sick should be shifted to the hospital. All those facilities should also make sure that women are also accommodated; this is not the time for a religious debate about the separation of men and women. Separation of those who are tested positive is important to keep the most vulnerable safe i.e. the elderly, cancer patients, people with diabetes, or heart conditions.

The community should also ask for volunteers who can take care of those who are put in isolation. They should tie up with doctors and other health care workers to train these volunteers in basic first aid and the sanitation and protection requirements of dealing with a viral disease.

With a pandemic of this nature, we have to be prepared – both mentally and physically – for deaths. There are lots of people around us today who will not be with us by the time we are out of this tragedy. We will lose our loved ones. We need to be ready to bury a big number of bodies in a short amount of time. The bodies should not be kissed or hugged as is the prevalent custom in South Asia. Another group of volunteers should be trained and prepared, guided by medical professionals and religious scholars, on how to give symbolic “ghusl”, handle the body, do janaza with a bare minimum of people. We may also need to think about mass graves for safe and quick disposal of bodies.

Loudspeakers atop mosque minarets should be used for community announcements and daily zikr sessions to give people hope and provide support for spiritual and mental well being. This is a time of incredible pain and loss and we need our religious leadership to work overtime in making sure that the community functions as a community by taking care of itself and that we don’t descend into a chaotic society where everyone is not looking beyond their individual interests.

The recommendations here are not to suggest that Muslims withdraw themselves from the larger society and cut themselves off. As the Quran says, “Cooperate with one another in goodness and righteousness…” [Al Maida verse 2]. They need to be in regular communications with government officials and hospitals in the area for up-to- date information. They should also be available for people and communities that are physically close to them and help them in their hour of needs, especially with the lessons learned, on how to make best use of resources and how to be self-sufficient.

When this is all over, there will be a huge task of community-building and nation-building. A hundred years ago, in the aftermath of the First World War, Indian Muslims provided valuable leadership to India and launched the first nationwide mass movement that jump-started India’s Independence struggle and eventually led to the formation of the modern Indian state. This historic time is upon us again.

Shamsuz Zaman is a medical doctor working in Delhi. Kashif is the former editor of TwoCircles.net, a daily news website covering Indian Muslims.