We Now Have to Search for Ram

We have forgotten Ram, the story of whose life is one of a promise-keeper. The BJP has no use for promises.

Note: The following article was originally written in Kannada at the time of the demolition of the Babri Masjid in 1992. It was subsequently published in the collected writings of Devanoora Mahadeva, Edege Bidda Akshara. It has been translated now, in response to the recent Supreme Court verdict on the Ayodhya land dispute.

You might have also seen an ad that appears now and then in Chandamama. The ad is Gandhiji’s words, ‘Tolerance and love is my dharma’. Whenever I come across this I take a quiet look at it. And every time I look at it, it amplifies my awareness.

There is always love for the person we are fond of, for their being as well as their thinking. Here, even if there is an instance of wrongdoing, it may even be seen as right!

But there is no love lost for those who we do not like, their being or their thinking. For this very reason, it is imperative that we practice tolerance when it comes to these people, however difficult it is. Becoming accustomed to tolerance isn’t about bearing in mind the interests of those we do not like.

When we become intolerant we become adharmis (without dharma), we become Lilliputian.

On December 6, a few of those known as Hindus became intolerant, destroyed the Masjid and grew distant from dharma. This may have shocked the Muslims, but it was those Hindus who became dharma-less. Because of this, Indian-ness too had to hang its head in shame.

This happened right in front of our very eyes.

Broadly speaking, there seem to be three groups in all religions – adhyathma-dharmis, kutumb-dharmis and vyapaar-dharmis.

When the eyes of kutumb-dharmis fall on those of adhyathma-dharmis, then tolerance and love is in abundance.

When vyapaar-dharmis entice kutumb-dharmis then intolerance and hatred flare up in society. And adharma performs a tandav. This is what happened on December 6. A few used the name of god and religion for their politics, for money and power and dragged religion itself into degeneration.

I will try and explain this better. If Ram was to appear in front of adhyathma-dharmis what would they do?

They might say, “When I see you in me and in all the others then why did you appear as separate entity? Go, go.” 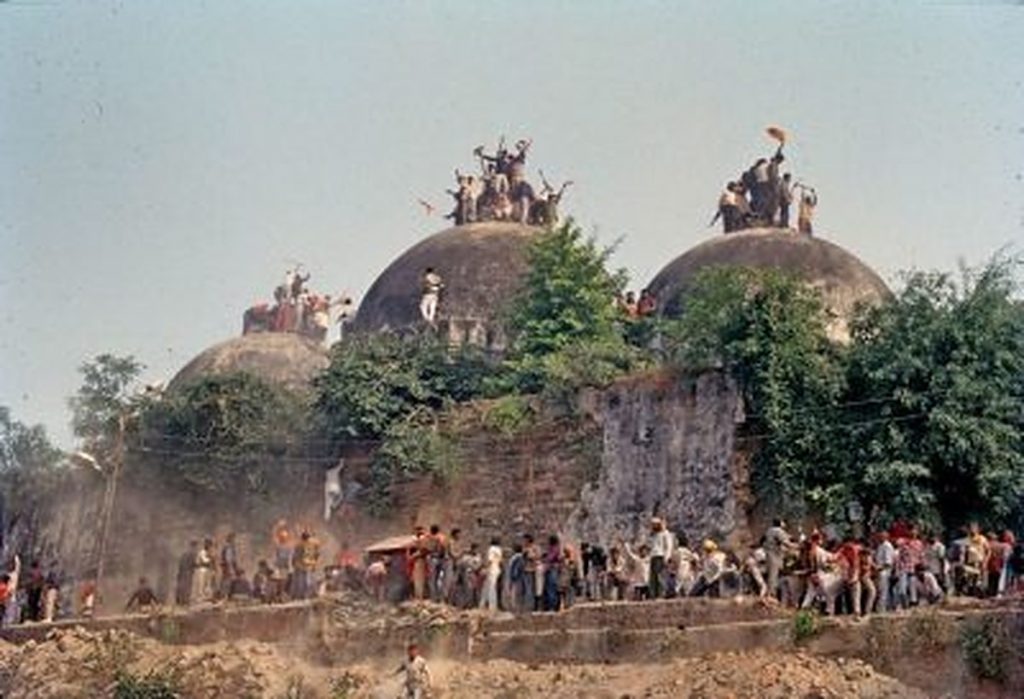 If Ram was to appear to kutumb-dharmis, then they might dance with joy and offer pujas. If Ram were to ever appear in front of vyapaar-dharmis then that would be the end of Ram’s story. Because the degenerate don’t need Ram.

Forget Ram, they don’t even want Ram’s moral values. Ram’s value lies in his ability to keep his word. Even though he never made a promise, as the very symbol of keeping one’s word, he delivered the promise made by his father.

We now have to search for Ram.

One should not go in search of the origins of these just like one does not search for a rishi’s antecedents. The origin of the places of worship that we see today would not be homogenous. Archaeological bone digging only spells disaster and does not bode well for an independent India.

We have to emerge out of the deplorable state of exhibiting disputes over masjid, god and religion as if they were broken body parts and begging in their name – begging for votes, begging for money, begging for power.

The installation of the idol of Ram Lalla, which occurred overnight in 1949, does not bring any sort of respect to that very god. If this is made into law then it would seem that the very law does not respect itself. It would be better if this delicate problem is not brought under the purview of law but resolved through dialogue.

Devanoora Mahadeva is a Kannada writer who has been conferred with the Padma Shri as well as the Sahitya Akademi award both of which he returned in protest against the growing intolerance in the country. A public intellectual and Dalit activist, he has been a guiding force to various social movements in Karnataka and the country.

Translated from Kannada by Rashmi Munikempanna.