'If Kartarpur Could be Reopened, Why Must Sharda Remain a Distant Dream?' ask Kashmiri Pandits

While Pakistan had facilitated Pakistani Hindus wanting to undertake the Sharda pilgrimage, Indian Hindus continue to lose out as the two countries are unable to reach an agreement.

The Sharda temple in Neelum Valley. Photo: Save Sharda Committee.

New Delhi: Holed up in his office on the outskirts of Delhi is Ravinder Pandita, founder of the Save Sharda Committee. Pandita sits surrounded by posters and pamphlets designed to educate the world about the significance of the Sharda temple.

The temple, in ruins, is located in Sharda, 137 kilometres northeast of Muzaffarabad in the upper belt of Neelum valley in Pakistan-occupied Kashmir (PoK). The temple is revered by the Hindu community, particularly Kashmiri Pandits.

Pandita’s organisation, the Save Sharda Committee, has demanded that the Sharda temple be opened to Kashmiri Pandits and other Indian Hindus for pilgrimage, via a route along the lines of the Kartarpur corridor for Sikh devotees. The Committee has also demanded that prayers commence in the temple.

Ever since the Kartarpur Gurudwara was reopened after several decades by the Indian and Pakistani governments, the Committee has been asking: if Kartarpur could be reopened, why does the pilgrimage to Sharda remain a distant dream?

Since 2006, Pandita has been filing forms, applications and letters in order to undertake the pilgrimage to the temple. While residents of J&K do have ‘LoC permits’ in force which allow them to travel across the Line of Control (LoC) between India and Pakistan, – formulated by the Ministry of External Affairs (MEA) after Prime Minister Atal Bihari Vajpayee met erstwhile Pakistani premiere General Pervez Musharraf and in force since 2007 – these permits only allow for the cross-border movement of those J&K residents who can establish that they have familial ties on the other side.

Pandita and many Hindus like him want the Union government to amend the rules governing these LoC permits to include within their scope an annual pilgrimage to the Sharda Peeth, along the lines of the Sikh pilgrimage to Nankana Sahib in Lahore.

After multiple applications to undertake the pilgrimage to Sharda from Pandita and others were rejected by the Union government, the Committee gathered around 150 civil society members across the LoC in PoK to worship in tandem with their Indian counterparts.

In November, 2016 and March, 2017, this group of civil society members laid flowers and installed a photograph of Goddess Sharda inside the temple, for the first time since Partition.

Later, in October, 2020, a group led by one Mohammed Rayees applied sindoor (vermillion) inside the Peeth. Most recently, in September, 2021, the civil society group aided in the installation of a portrait of Swami Nand Lal and Goddess Sharda inside the temple.

But these acts have not satisfied Pandita’s desire to pray at Sharda and reclaim his heritage. “As a Kashmiri Pandit who migrated from the [Kashmir] Valley in 1990, symbols of our culture and heritage are of greater value to our community, which is scattered around the world. Visiting Sharda Peeth and undertaking the pilgrimage is a great part of our faith and must be allowed by the Union government,” Pandita said.

Pandita further explained how routes to undertake this pilgrimage already exist. Two corridors – the Uri-Muzaffarabad route and Pooch-Rawalakot route – are meant for cross-border travel and have been plied on in the past. However, travel on these routes was suspended following the Pulwama terror attack in February, 2019 and tensions between the two countries thereafter.

“My dilemma is the refusal by my own government for this pilgrimage. If Pakistan refused me this right, it was understandable. They, however, have safeguarded our temples, after my pleas,” Pandita said.

In December, 2018, Directorate General of Archaeology & Tourism in the Pakistan government passed an order in favour of the Save Sharda Committee, for maintaining the sanctity of the Peeth. Thereafter, in an order dated June 29, 2019, nearly 53 minorities shrines in 10 districts of PoK were brought under the aegis of Department of Archaeology. 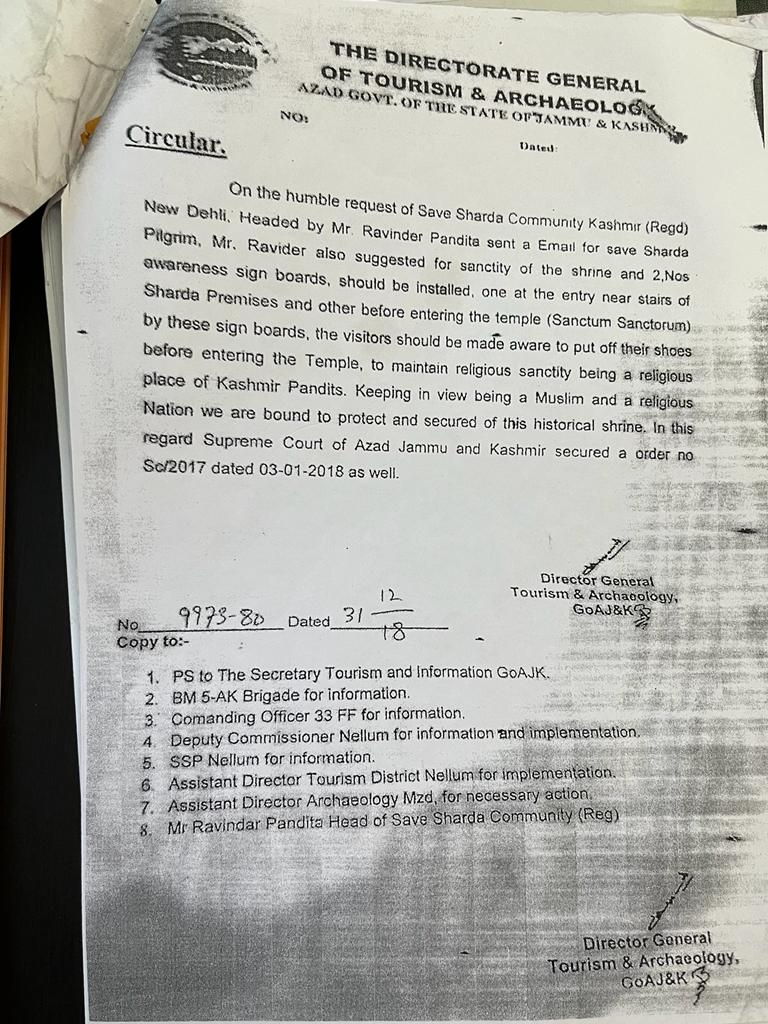 The order from the Directorate of Archaeology and Tourism. Photo: Save Sharda Committee.

On June 24, 2019, Ramesh Vankwani, a member of Pakistan’s National Assembly and the Patron-in-chief of the Pakistani Hindu Council (PHC) paid a visit to the temple with a delegation of five PHC members. The Pakistani government, upon the submission of a comprehensive report by Vankwani, took the decision to allow only Pakistani Hindus to visit Sharda Peeth, for the time being.

Vankwani spoke to The Wire about the various complications that surround Sharda Peeth. One of the major hindrances, he said, was India’s refusal to communicate on the issue.

According to him, Kashmir has to be the centre for the improvement of relations between the two neighbours. But the shared past the countries share is acting as a barrier between them.

“I hope that the two countries sit down to discuss routes for reconciliation, but time and again, the Indian government does something to upset the process. The future of Yasin Malik might also further turn things awry,” Vankwani explained. He also added how trade and tourism must be restarted at the earliest in order to diffuse tensions.

Tanveer Ahmed, an independent public-policy researcher, has been working uninterrupted in the Pakistan administered region since 2005. Ahmed was a key facilitator in the installation of religious photographs inside the Sharda temple in 2021.

Ahmed has family ties to both Kashmirs. After he discovered that his grandmother had once been a Hindu, he felt inclined to aid in the revival of the peeth. “My inclination towards the revitalisation of Sharda has a human dimension and is aimed at restoring the social equilibrium in the region,” he said.

On September 14, 2021, Pandita, along with other members of the Committee and locals of the Teetwal and Karnah localities in North Kashmir district of Kupwara, performed a Hindu prayer ritual that used to be held at Sharda Peeth prior to Partition, on the occasion of Ganga Ashtami.

One of the most remarkable things about the ritual was that the 20 pilgrims interacted with the locals of PoK who had come to greet them, on the other side of the river Kishenganga in Chilhana. The supporters from the other side raised slogans of peace and waved white flags. Moreover, Muslims from the Pakistani side held Bhagwa (saffron flags) and the pilgrims in Teetwal greeted them with Islamic flags.

The locals from the two adjacent areas met over a bridge to pray for peace. Over the Kishenganga, two acts of extreme significance took place – the Puja in Teetwal reiterated the message of brotherhood among Hindus and Muslims in Kashmir, as Muslims helped Pandits facilitate the Puja; and this initiative acted as a building-block to kickstart people-to-people contact among two sets of people who live at the frontiers of this seven-decade-old conflict. 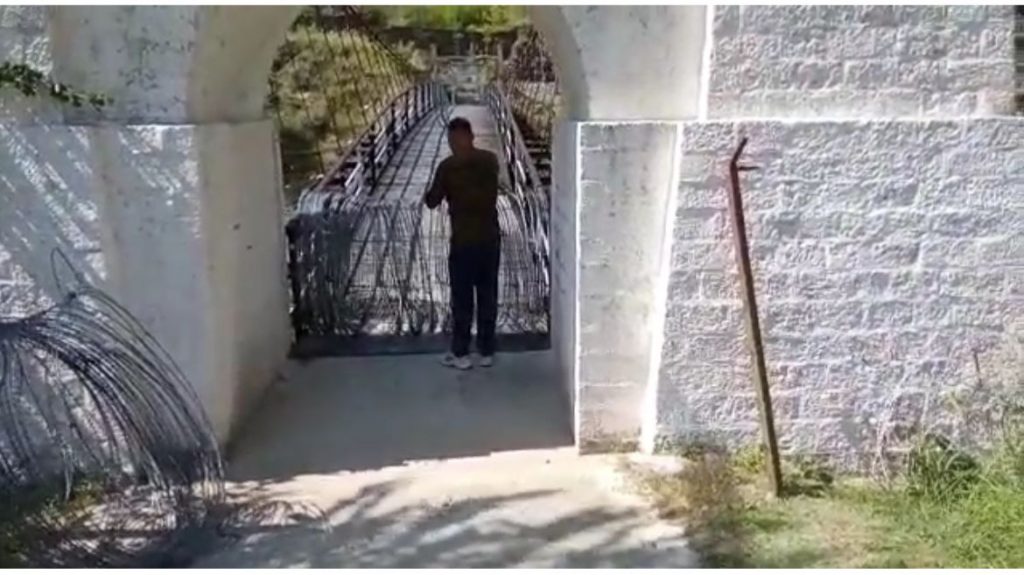 The bridge over the Kishenganga river. Photo: Save Sharda Committee.

A temple in Teetwal is being constructed on land which housed a temple long ago, in pre-partition times. In this instance too, the land is being taken care of by the local pahari Muslims.

The SSC’s struggle is aimed at rebuilding this temple as well. The Pandit community affiliated with the SSC feels that by reclaiming such heritage sites, the return of the community would become a possibility, even if through religious tourism. Such interfaith initiatives are steadily reducing the trust deficit the exists between the communities at some level, the locals explained.

Laden will long-lasting conflicts, South Asian peace-building is known for the deployment of Confidence-Building Measures (CBMs) as a mechanism for conflict resolution and to cater to the trust deficit between warring nations.

Over seven decades of war and peace, India and Pakistan have tried and tested several CBMs to foster peace in the region. Measures ranging from Nuclear CBMs to Disputed Territory CBMs; to normalising bilateral trade; formal and informal ceasefires; maritime and military agreements; religious tourism. The two nuclear nations have exhausted all of these measures.

Sudheendra Kulkarni, who was an advisor to Prime Minister Vajpayee, views the facilitation of pilgrims to Sharda as a CBM that the Union government should be willing to facilitate. “If the Kartarpur corridor can be established with the cooperation of both governments, why not the Sharda corridor through a similar arrangement? The Line of Control should be converted into a line of cooperation and connectivity,” Kulkarni said.

Apart from the pilgrimage to Sharda Peeth, Kulkarni also suggests allowing Muslims from Pakistan to visit Islamic shrines in Kashmir, once an arrangement for the proposed corridor takes shape. “This way, religion can play a reconciliatory role between the countries and subsequently lead to resolving the Kashmir issue amicably,” he said.

In the current circumstances, Kulkarni explains that the two countries are difficult to place face-to-face during dialogue. But he feels that Kashmir deserves peace and there should be dialogue to discuss the same. “Here, religion can act as a bridge of concord, connectivity and cooperation,” Kulkarni told The Wire.

As Kashmir dives deeper into conflict, Pandits, as a community, are increasingly becoming targets of terrorism, yet again. It has been three years since home minister Amit Shah read down Article 370 in a mere minute and drew roadmaps to reclaim PoK, and Pandits still haven’t had any access to the temple, even as Pakistan facilitated its own Hindus to undertake the pilgrimage.