The sentiments of the devotees cannot be ignored while considering the judgement, the RSS said. 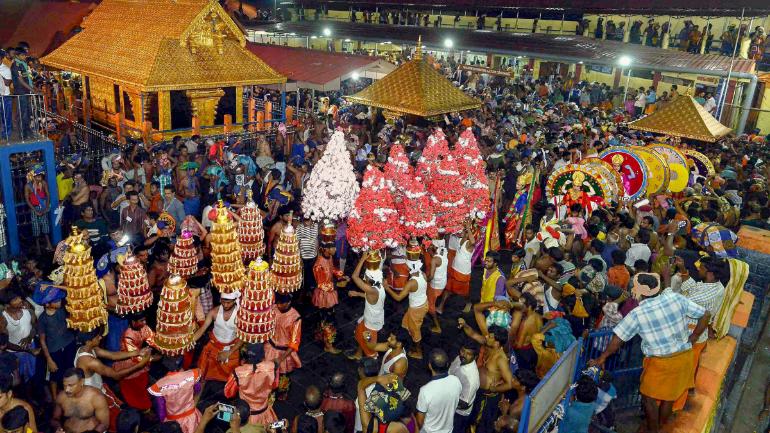 The Rashtriya Swayamsevak Sangh on Wednesday criticised the Kerala government for rushing to implement the Supreme Court verdict on entry of women into the Ayyappa temple in Sabarimala, Kerala.

A statement issued by Suresh Bhaiyyaji Joshi, RSS general secretary, said that while the Supreme Court’s judgement must be honoured, “It is an issue of a local temple tradition and faith to which sentiments of millions of devotees, including women, are attached. These sentiments of the devotees cannot be ignored while considering the judgement.”

The RSS also slammed the Kerala government for implementing the judgement immediately. “Unfortunately, the Kerala government has taken steps to implement the judgement with immediate effect without taking the sentiments of the devotees into consideration. There is an obvious reaction to the same by the devotees, especially women, who are protesting against the forceful breaking of the tradition.”

The organisation called upon stakeholders, including spiritual and community leaders, to address the issue through judicial options. “They must convey their concerns on their right to worship in a manner which best suits their faith and devotion, to the authorities in a peaceful manner,” the statement said.

The RSS statement comes in the wake of Kerala chief minister Pinarayi Vijayan’s statement on Wednesday that the state government will ensure facilities and protection to women devotees visiting the shrine. “Women police personnel from Kerala and neighbouring states will be deputed to ensure law and order. Women who want to go to Sabarimala cannot be stopped,” Vijayan had said, according to an Indian Express report.

The Supreme Court had on Sepetmber 28 – in a 4:1 verdict – ruled that the barring entry of women between age 10 and 50 years was unconstitutional and also not an essential part of the religion. “Rules disallowing women in Sabarimala are unconstitutional and violative of Article 21,” the justice R.F. Nariman had said in his judgement.