More Than EVMs, It Is 'the Hindu Mind' Which Has Been Effectively Rigged

Modi has become confident that the Hindu mind has been vulgarised and become so spiritually hollow that even a crudity like his Kedarnath yatra can pass off as a religious expedition.

A bike rally during the Ram Navami procession in Kolkata in 2018. Credit: Shome Basu

If election results follow the direction shown by the exit polls, there would be accusations about the rigging of EVM machines.

But irrespective of what the results are, there is one thing no one should have any confusion about: more than EVMs, it is the Hindu mind which has been effectively rigged.

What explains the audacity of Narendra Modi indulging in his spiritual journeys in full view of cameras, of getting his ‘Ekant Sadhna’ telecast live to lakhs and crores of Hindu households? Why did he feel so confident as to choreograph this kitschy affair and think that it would be accepted as a genuine religious experience by the Hindu masses?

Modi is confident that the Hindu mind has been so vulgarised and become so spiritually hollow that a crudity like this can pass off as a religious expedition.

This writer would likely be flogged for creating a generality called ‘The Hindu Mind’.

He would be told that there is nothing like ‘a’ Hindu mind. Hindu-ness is all about diversity; that it is not like the Semitic faiths; that its catholicity makes it multi-eyed, multi-faceted and therefore tolerant to new view points. That it is the most creative and most humane of all religions on this earth, he would be told.

The admonition is misplaced and arises out of ignorance of the changes that the practice of Hindu religion has undergone in the last quarter century or even more. It is during this period that we saw the rise of gurus like Morari Bapu, Asaram Bapu, Baba Ramdev and Sadhguru Jaggi.

Together, they represent the spiritual leadership that Hindus have produced and accepted.

But even before that, the very formation of the Vishwa Hindu Parishad should have alerted Hindus about the trap that was being laid for them. People associated with the VHP or in the fold of it were called saints, thus totally pulverising the word.

The VHP is a political body, but it was treated all along as a religious body representing the collective religious mind of the Hindus.

Hindus have allowed their religious moments to be taken over by bodies like the VHP, Bajrang Dal and the Rashtriya Swayamsevak Sangh.

Saints were thought to be “viragis”, unbound by the social, material and temporal. But here we had them gheraoing the parliament in the name of saving cows, knowing fully well that it was not a religious but a political act; organising and leading “movements” which were directed against Muslims and working for a political party – the BJP.

Hindus have allowed their religious moments to be taken over by bodies like the VHP, Bajrang Dal and the Rashtriya Swayamsevak Sangh. They have gradually lost the sense of the personal and also of solitude, so essential for a real religious experience. Everything is publicised and turns into a spectacle.

Hindus have always resented the state subsidy given to the Haj pilgrims. But they have stopped thinking how their own pilgrimages have turned into huge consumerist exercises and how they themselves look towards the state on all such occasions. Be it the Mansarovar Yatra or the Kumbh Mela or the Badrinath/Kedarnath yatras – all of them are state subsidised one way or another.

Apart from this, Hindus have also gradually handed over religious occasions to a particular political party. This has resulted in a homogeneity. When I saw tricolour in the hands of kanwariyas, it immediately struck me that the nation has dethroned Shiva from his exalted seat of the lord of the three worlds. Poor Shiva is now confined to a territorial confine.

Similarly, Ram Navami processions in Bengal were not religious and Hindus know it. They are political aggression by a particular party but are being tolerated in the name of Hinduism. Be it Bihar or Uttar Pradesh or any other region, Hindu religious occasions have a utilitarian end – to further the prospects of a political party.

There is no resentment from Hindus against it.

Nationalisation of Hinduism or its territorialisation means that Hindus have lost the sense of the cosmos. They have become narrow in their outlook. If we look at the last 70 years which are post Gandhi years, there has not been a significant debate within Hinduism. It shunned problems raised by critics like Bhim Rao Ambedkar. Gandhi and Vinoba Bhave did try to reinterpret Gita and Hinduism, but after them there has been no internal probing.

When challenged by voices which it claimed were part of it but never got a role to participate in its articulation, it started playing the victim. Islam, as Hazari Prasad Dwivedi noted, brought the notion of equality, strange to Hindu ears, and Christianity the notion of service and neighbourhood – again new to Hindus.

But instead of responding to them, Hinduism went into a shell. 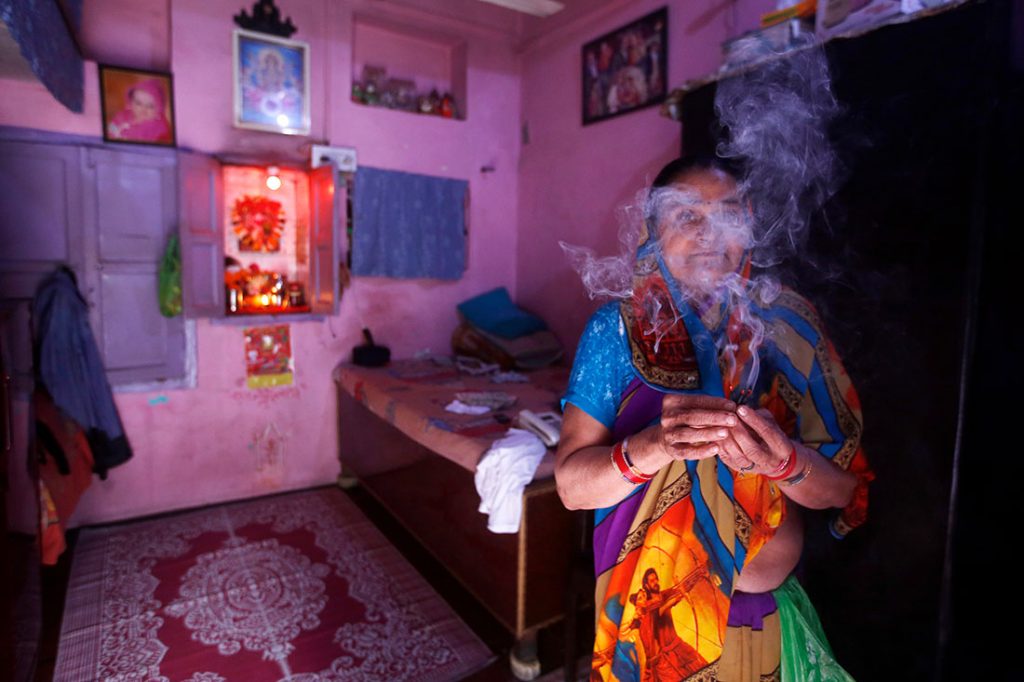 A Hindu woman burns incense sticks as she prays inside her home in Delhi. Credit: Reuters/Adnan Abidi

There has not been significant philosophical engagement within the traditions of Hinduism, no reinterpretation of the texts, no creative dialogue with its different strands. Hinduism, if anything, is about past glory. The greatest philosophers it has produced are Osho, Sadhguru Jaggi, among others.

In short, Hinduism has lost spiritual ambition and courage. If everything has been achieved in the Vedas then we are insignificant coolies of the past glory destined to carry the ghosts of our ancestors on our shoulders.

Also read: Why the Bharatiya Janata Party Is Not Truly Bharatiya

Three four years ago, I started getting calls from a representative of one World Brahmin Council. They were very concerned about the hindrances created in the path of people wanting to know Vedas. To undo this, they had planned a run for the Vedas.

I asked him who was creating these obstacles. Romila Thapar, he said. How, I wondered can an individual like Romila Thapar be such a formidable obstacle as to hide the Vedas from its seekers?

Secondly, how can running lead us to the Vedas? I suggested to him that instead of running, he should consider getting five, ten scholars to share their own exploration of the world of Vedas.

After assuring me that it would be done, the man never got back to me.

Hazari Prasad Dwivedi had termed the medieval period as a period of arrested or stunned intellect. He lamented the lack of original thinking in this period. Ram Chandra Shukla and others held the aggression of Islam responsible for the retreat of Hinduism. But this period was a period of immense innovation and creativity; literature, art, architecture, etc., bear witness to it.

To Hinduism, our times pose a challenge. Can it retain its autonomy vis-à-vis politics or will politics degrade it so much that the like of Yogi Adityanath, Pragya Thakur and Narendra Modi will be remembered as its representative voices by posterity?

It is time for Hindus to think about this great rigging and find ways to free their minds from it.