Review: In the Footsteps of an Inspiring Poet-Philosopher

Dushyanth Sridhar's book on Vedanta Desika is a fitting tribute to this colossus who strode the religious firmament and has inspired generations to follow in his footsteps. Two successive milestones in the history of the Sri Vaishnava religion, based on Visishtadvaita Vedanta – the millennium birth anniversary of Ramanuja (1017-1137 CE) last year and the 750th birth anniversary of his successor, Vedanta Desika (1268-1369 CE), being celebrated today (September 21) – have been not only occasions of great rejoicing of a lifetime for the followers of these philosophers-preceptors but have also presented an opportunity for scholars, both academic and traditional, to reassess their contributions. Two titles of the coffee-table genre published by religious institutions to coincide with these occasions stand out for the foresight of their trustees to entrust scholars with the responsibility of the content, thereby ensuring that substance matched the gloss.

Srirangam: Heaven on Earth published by Sri Ranganathaswamy Temple, Srirangam (2017) on this foremost Sri Vaishnava kshetra (sacred place) was compiled by historian Chithra Madhavan, with contributions from well-known scholars. The other one being reviewed here, Vedanta Desika–The Peerless Poet-Preceptor, is by Dushyanth Sridhar, who is a scholar with a difference. He defies categorisation and straddles tradition and modernity by reinventing the modes of dissemination of philosophical knowledge through lectures, Harikathas, stage productions, social media and as the script writer-protagonist of a documentary film on Vedanta Desika released recently. This book has the stamp of Sridhar’s love-fest with Desika, which began early during his student days and reached a turning point when he gave up his corporate career to embark on propagation of scriptures full time. It also displays his acumen in seeking advice from established scholars to ensure veracity of facts. Considering that illustration is key to showcase the content in a book of this nature, bringing the veteran, cartoonist-artist Keshav Venkataraghavan on board has enhanced it with a spiritual dimension to the visual layout – creations of an artist who engages with his art as daily meditation.

The photographs shot with insight and an eye for detail into this complex subject by Vinod Ranganathan is matched by his skill, and two paintings of the renowned, late illustrator, Silpi, add the vintage touch to match the life and times of this versatile, polyglot (Sanskrit, Tamil, Prakrit, Pali), poet-philosopher.

Sridhar’s presentation of Desika’s wide-ranging contributions in this book reflects the objective of making this abstract subject intelligible to the contemporary reader. He has organised it into five sections: an introductory biographical sketch, Desika as a philosopher, a theologist and as a literary colossus, and the concluding section is on prosopography to highlight how his corpus of works has become a subject of study.

The titles (pages 18, 102) conferred on Desika by his contemporaries and successors reflect the sheer range of his accomplishments: kavi tarkika simha (a lion among poets and philosophers), vedantacharya (philosopher-preceptor) when he became the acknowledged vedantin of his time by winning over opponents by his polemical skills in debate and writing terse philosophical texts, and sarva tantra swatantra (master of all crafts). The description of the literary nuances, numerical and graphic patterns in Desika’s poetry with illustrations of verses from the Paduka Sahasra offers a perspective of the sheer range of his intellect. The appendices providing references, list of Desika’s works (105 titles), bibliography and another list of works giving a brief outline of each text make it very informative.

The post-Ramanuja period was one of consolidation of this founding preceptor’s legacy in Vishishtadvaita Vedanta and Srivaishnavism. Desika inherited the twin scriptural legacy (ubhayavedanta) of the Vedas in Sanskrit and the Nalayira Divyaprabandham in Tamil, which is an anthology of nearly 4,000 verses composed by the 12 Azhwars, who were mystics. Along with these two, the inclusion of the scriptural texts that are the authority for temple and personal worship, the Vaishnavagamas, especially the Pancharatra, within Vedanta, the consequence of Ramanuja’s defense in his Sribhasya, laid the foundation for the theistic expression of the philosophical concepts in religion – temple art and architecture, devotional hymns and above all worship of the image form of the deity (archa) in temples accessible to all. The time was ripe for a preceptor of Desika’s stature to take all these scriptural strands together to rejuvenate Ramanuja’s contributions, which he did with consummate skill. Sridhar’s proficiency in Desika’s oeuvre can be seen in his choice of texts in the sections on philosophy, theology and literature. One of the heartening details highlighted here is the approbation received by Desika from Vedantins of other schools especially by the Advaitin, Appayya Dikshita (1520-1593), who wrote a commentary on Desika’s hymn, the Yadavabhyudaya, in which the poet waxes eloquent on Krishna, the delight of devotees and artists. These sections naturally offer a wide scope for Keshav’s art, which comes to the fore in his paintings of Vishnu’s incarnations (pages 75-85) and of Krishna (pages 93-97; 106-113) – a veritable visual treat for both the devotee and the connoisseur of art.

The presentation of Desika as philosopher and theologian is interwoven with his life journey through the important Srivaishnava kshetras, especially Kanchipuram, Srirangam, Tiruvahindapuram, Tirupati and Melkote, which has enabled Ranganathan to showcase the art and architecture of the temples in them with his well-visualised photographs to juxtapose Desika’s association with them in the text. 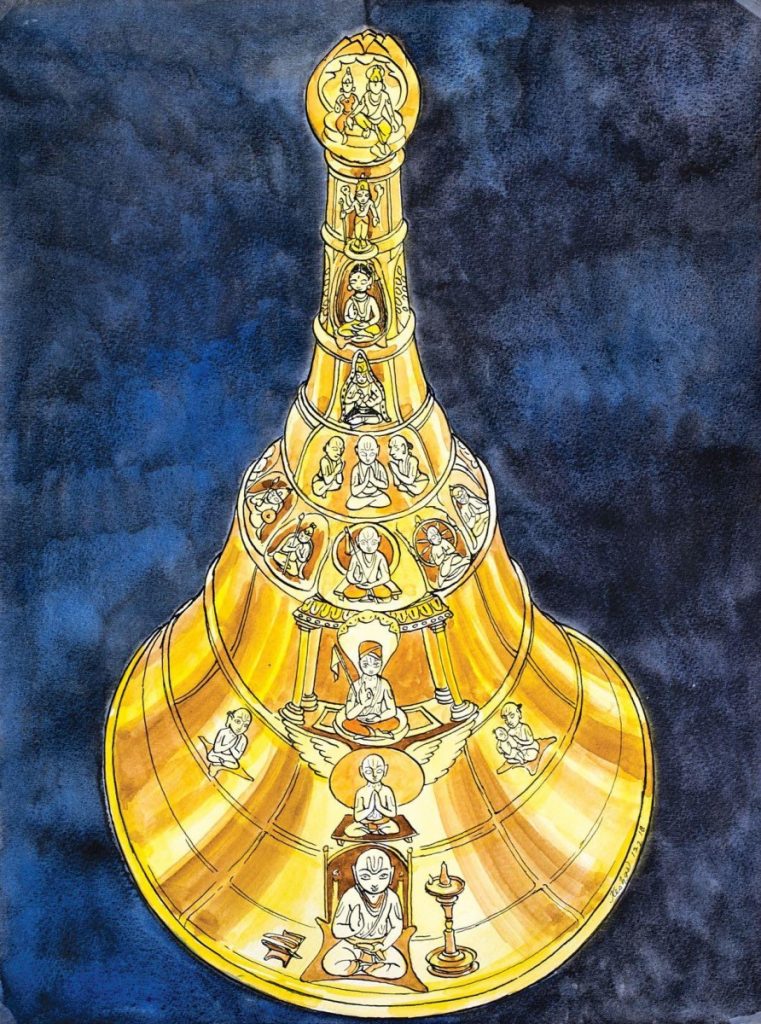 Inclusion of photos of the Pomono Ranganatha temple, NY reflects the global spread of this tradition today. The picture of the ceiling mural in the Kanchipuram Varadarajaswamy Temple (page 128) in the section on prosopography portraying the incident of Vatysa Varadacharya (Nadadur Ammal) prophesying that Desika would become a great Vedantin when he was a child is particularly noteworthy as it is a biographical incident with corroboration (page 127).

The most engaging biographical detail celebrated in art and literature is Desika’s birth as an incarnation of the bell (ghanta) of the temple at Tirumala, a benediction on his parents. Sridhar’s biographical sketch of the incidents relating to his birth at Toopul and early life in Kanchipuram has been depicted by Keshav (page 40) in the form of a bell (alluded by Desika in his drama, the Sankalpa Suryodaya) with the details of his spiritual lineage. The bell also evokes the esoteric significance of the primordial sound (nada), Om, the origin of the word itself, the Veda – the basis of Vedanta, which Desika was born to expound.

The book is a fitting tribute to this colossus who strode the religious firmament and has inspired generations to follow in his footsteps. It should not remain a memento in the hands of a few considering its price; it deserves to be published as paperback and perhaps as E-book to reach a wider readership.