Will Religion Deliver Us From or Doom Us to the Pandemic?

How do leaders of deeply religious societies, who have for centuries encouraged mass gatherings, abruptly tell believers that it is precisely these congregations they should avoid?

A man wearing a protective mask walks towards a bus that will take him to a quarantine facility, amid concerns about the spread of coronavirus disease (COVID-19), in Nizamuddin, area of New Delhi, India, March 31, 2020. Photo: Reuters/Adnan Abidi 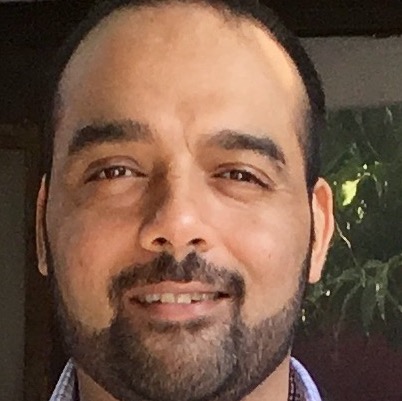 With more than 950 confirmed coronavirus cases across the country, as of April 3, linked to the gathering of the Islamic sect Tablighi Jamaat in Delhi at Markaz, Nizamuddin, the ‘cluster’ has been imprinted in our minds as an unrivalled hub of infection in the epidemic in India so far.

During these times, it is perhaps easy to forget that just over a month ago another country was similarly captivated by its own religious hotbed of contagion. South Korea, on February 17, appeared to have its number of coronavirus infections under control at 30. But the very next day, in came Patient Number 31, a 61-year-old woman who was a member of the Shincheonji Church of Jesus, which mainstream churches considered a cult.

Within days the number of infections soared into the hundreds at both the church and neighbouring areas of Daegu, a city of 2.5 million. It is believed Patient 31 was able to transmit her infection so efficiently thanks to some of the church’s practices which included praying in close proximity in an enclosed space and prohibiting the wearing of glasses and face masks. As per the Korea Centre for Disease Control and Prevention, as of March 7, 63.5% of all confirmed cases in the country were ‘related to Shincheonji.’

The Shincheonji case, it’s worth noting, is analogous to the Nizamuddin one in another respect too. Given that they were religious minorities, both groups bore the brunt of majoritarian prejudices. Just as the Presbyterian Church of Korea claimed that the founder of the Shincheonji church held “heretical” and “anti-Christian” views, WhatsApp forwards in India accused the Tablighi Jamaat – the orthodox Muslim group who organised the ‘super-spreading’ meeting at Nizamuddin – of waging a “Corona Jihad”.

But did members of the above religious groups behave in a fundamentally riskier manner than people of other faiths? Were theirs the only instances of callousness? Mass congregations, as we know, are hardly a unique feature to any one religion – all faiths subscribe to them in different ways. What’s more, an unfolding of the pandemic also reveals that distinct coronavirus clusters had originated at other religious gatherings both before and after the abovementioned events.

Why, in Korea itself, on 17 March, around 79 devotees of a separate church became infected with the disease after, it is claimed, salt-water was sprayed into their mouths under the belief that this would protect them from the virus. In Punjab, a preacher Baldev Singh, ignored advice to self-quarantine after returning from Europe. He later went on to attend a large gathering to celebrate the Sikh festival of Hola Mohalla, an annual six-day event attended by lakhs from across the country and the world, which effectively led to the quarantining of 40,000 people.

It was clear – from New York, where a synagogue was at the centre of an early outbreak, to Malaysia, where incidentally the Tablighi Jamaat held another meeting which would become the source of hundreds of coronavirus cases across South East Asia—that it wasn’t a particular religion but religious congregations generally that were potent pathways in the spread of coronavirus.

This should not be surprising. It is precisely during prayers, sermons and festivals that one’s personal space all but evaporates.  We lose our sense of self and become one with our community, whether out of camaraderie or faith.

But in these unprecedented times one has to additionally ask: Is it reasonable to expect believers to change their ways of collecting at temples, mosques and churches, of touching deities and embracing one another, overnight? How do you suddenly believe what was once your strength has now become your Achilles’ heel? To think in such a way would be to go against your instincts. 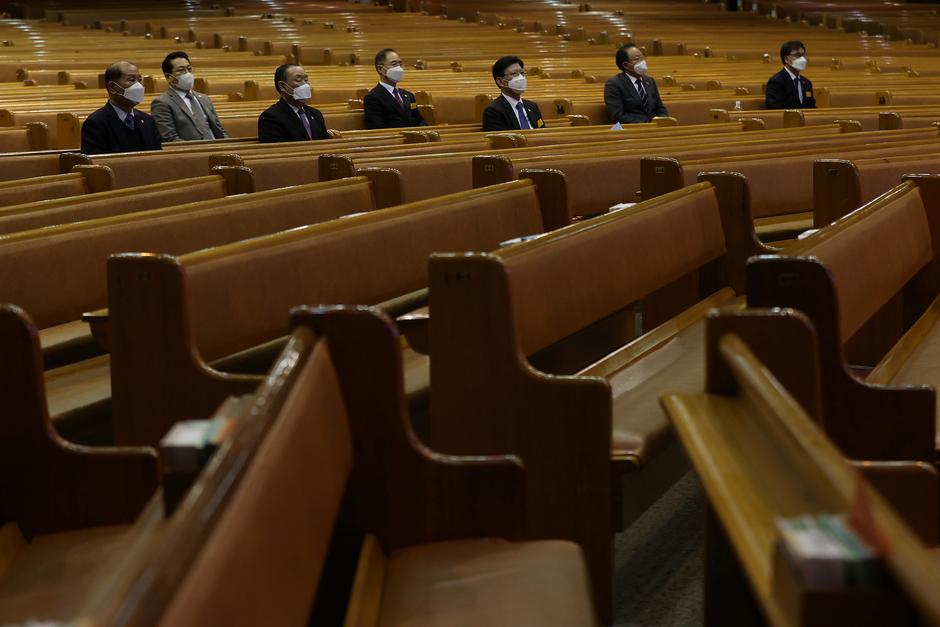 Christian faithfuls wearing masks to prevent contracting the coronavirus sit during a service at a church in Seoul, South Korea, March 1, 2020. Photo: Yonhap via Reuters

No wonder there was news of a sermon posted on a “Delhi Markaj” YouTube channel, in which the speaker said that there is no need to follow social distancing. That it was a “conspiracy to keep Muslims away from fellow Muslims”.

“Where will you run from death? Death is in front of you… This is an occasion to seek penance from God. Not an occasion where one comes under the influence of doctors and stops Namaaz, meeting each other… Yes, there is a virus. But 70,000 angels are with me and if they can’t save me, who will? This is the time for more such gatherings, not the time to avoid each other… Who says if we meet then disease will spread? The disease will pass, but eating from the same plate, it will benefit us… This is a plan to end amity between Muslims, to alienate them from each other,” the speaker says.

After all, the idea of physical distancing is brand new; religious habits, on the other hand, go back centuries and more. In these frightening times of social distancing and self-isolation the faithful everywhere are having to make strange decisions. They are wondering: how are we to properly retain our devotion without compromising on our customs?

Back in mid-March, angry crowds of Shiites stormed into the courtyards of Mashhad’s Imam Reza shrine and Qom’s Fatima Masumeh shrine in Iran. This was where people typically prayed for 24 hours a day, often touching and kissing the shrines. And so despite the virulent nature of the epidemic in that country, there appeared a video of a man on Instagram licking one of the shrines. “So the disease can go inside my body and others can visit it with no anxiety,” he said.

To this, MP Hasan Nowrozi responded with a strict warning: “Those doing such unconventional acts are publishing fake and superstitious news against the officials in the country. Such people would face two months to two years [in] jail and up to 74 lashes as punishment.”

Also read: What Indian Muslims Can Do in the Face of the Coronavirus Epidemic

This response presents another issue regarding the nature of faith: if believing in a higher power is the chief driver of religion, then superstition is but its inescapable by-product. In this regard, Iran was certainly not alone.

There were claims of cow urine being sold in West Bengal as an elixir providing immunity against the novel coronavirus. Furthermore, around the same time in March, Indians thronged the streets in large numbers to play Holi even after Prime Minister Modi himself announced that he would be keeping away from public gatherings.

Reversing deep-seated habits was never going to be easy. The pertinent question now is: how do leaders of deeply religious societies like ours, who have for centuries encouraged mass gatherings, abruptly tell believers that it is precisely these congregations they should avoid?

How do you backtrack on blind faith and its associated linkages?

In February, Saudi Arabia had banned foreign arrivals and halted visits to Mecca and Medina for umrah, a religious pilgrimage that Muslims can undertake at any time of year. Then on March 31, it further asked believers to temporarily defer preparations for the annual pilgrimage. But for how long can the country feasibly keep the doors to Islam’s holiest sites closed without stirring up angst?

How would social distancing rules be maintained at the Tirupati Balaji Temple, where Hindus queue up for tens of hours with their bodies pressed up against each other in order to get darshan of the Lord, when it ultimately reopens after the present lockdown? 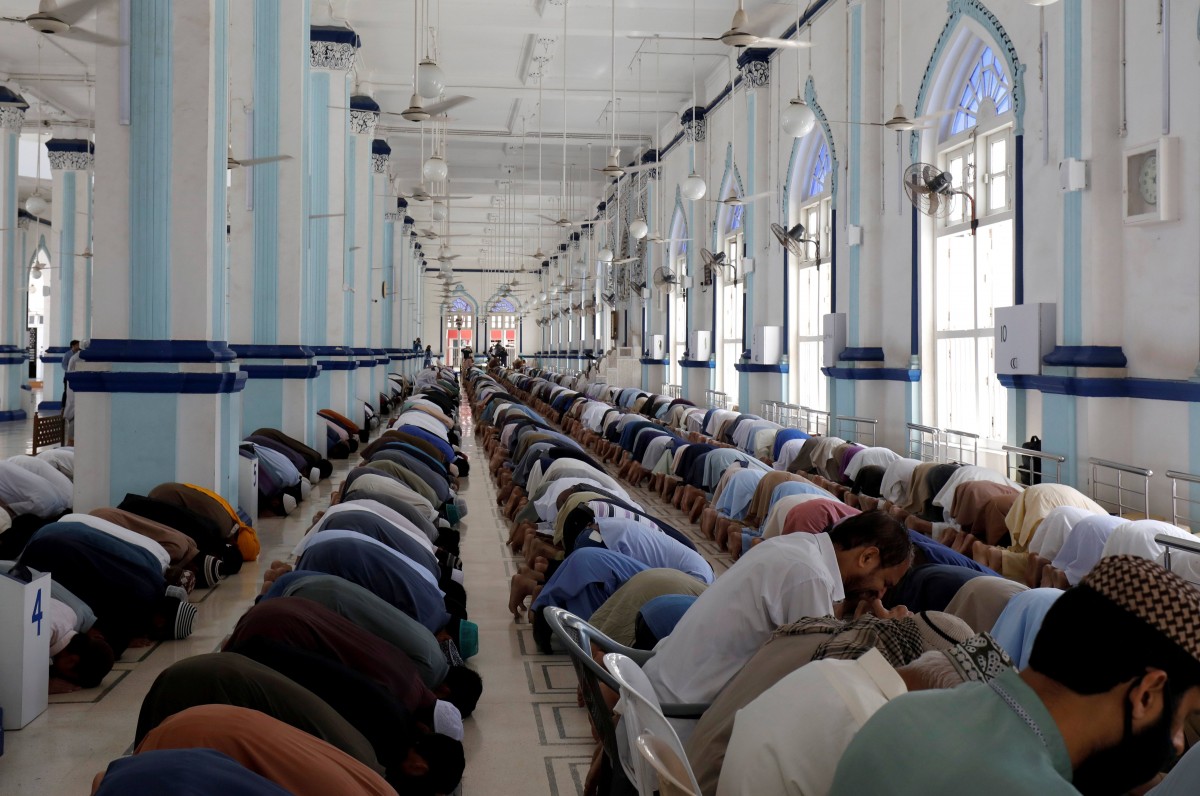 Are we, at least in the short-to-medium term, capable of rethinking and reimagining what faith means to us? Can we change our reflexes to beat this ever-mutating virus?

Faith in this pandemic

If stories from around the world are any indication – from the Roman Catholic Church, which has begun livestreaming the Pope’s daily mass and Sunday sermon; and some parishes in the US that are offering drive-through confessions; to the renowned wellness guru, Deepak Chopra offering us ‘a moment of Zen for people in a time of uncertainty’, a meditation stream which incidentally crashed due to too much traffic – it was manifest that organised religion was in no need of saving. It had proven itself to be wholly capable of adapting to this changed world.

But even still, one question lingered: How could individuals retain their strength despite long separations from friends and loved ones and without the imminent prospect of commingling on the horizon?

For the pious, such anxieties are only compounded by the incessant news of death and sickness all around. The question at the back of everybody’s mind is: “But why? Why is God doing this?”

Perhaps none of these existential conundrums were directly addressed in Prime Minister Modi’s televised announcements. Still, soon after the Prime Minister announced the Janata Curfew from 7 am to 9 pm on Sunday, March 22, religious messengers on WhatsApp didn’t waste a moment in appropriating the national exercise to stall the community spread of the virus into one having an astrological basis.

“At that time moon is passing to a new ‘nakshatra’ called Revati. The cumulative vibration from bells and clapping will encourage blood circulation in the body. 22nd March is Amavasya, the darkest day in a month. All virus, bacteria and evil forces have maximum potential and power on such days. 5 PM- clapping, shankh nada etc by 130 crore Indians at the same time will create so much energy that the virus will lose all potency,” one message read.

Atheists might well laugh at the faith and superstition on display here and they do so with good reason. But they forget that in a time of crisis when people want to hear words of hope and comfort, for many it is only the language of faith that really delivers. Leaders of traditional cultures understand this well.

Conceivably this is why when the Prime Minister ordered the country to lock itself down for three weeks on March 24, he used the language of the Ramayana. He told us to draw a Laxman Rekha outside our homes. Doordarshan then decided to rerun the three-decade-old TV series of the epic on ‘public demand’. More recently, when the PM spoke, on April 3, of lighting diyas outside ur homes to mark the country’s fight against COVID-19, a pandit said to me that he was exhorting the faithful to find the light from within themselves as the outside was ‘all empty, totally dark’.

In these times when leaders of places like Singapore and New York are themselves laying bare before the public hard facts on the shortage of ventilators and the disastrous toll on the economy, there is something to be said about the position of faith in this pandemic.

And its power to sway – or in India’s case keep at home – hundreds of millions.

Siddharth Kapila is a lawyer-turned-writer presently working on a travel memoir on Hindu pilgrimage sites.