In Moga and Malerkotla districts, recent acts of friendship between Sikhs and Muslims have stood in contrast to religious intolerance elsewhere in India. 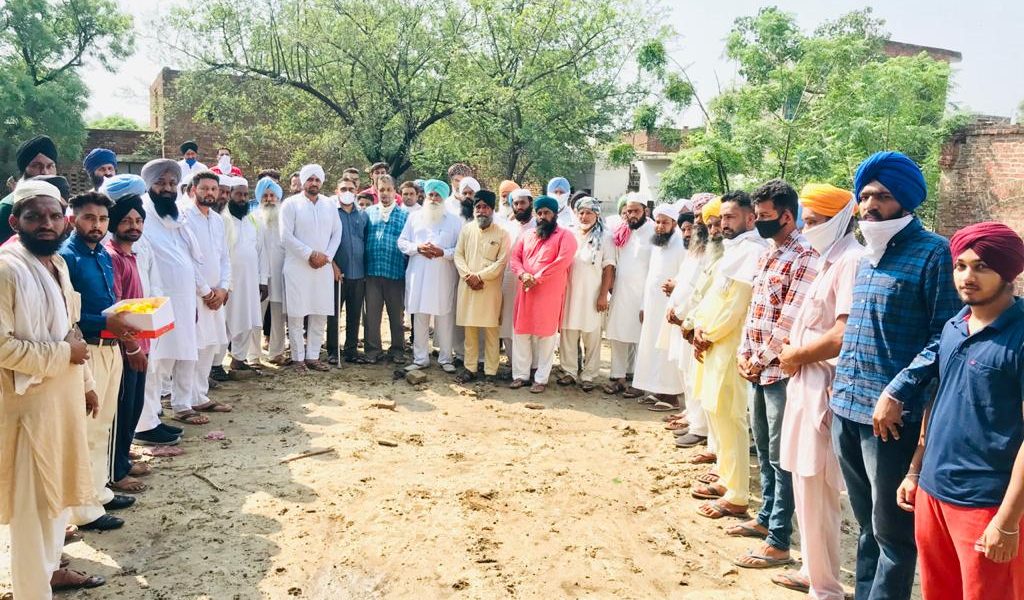 Sikhs and Muslims from Jitwal Kalan village in Malerkotla pose for a photograph as Jagmel Singh handed over his ancestral land for the construction of a mosque. Photo: Kusum Arora

Jalandhar: Two villages of Malerkotla and Moga districts of Punjab have become examples of Sikh-Muslim unity at a time when hate crimes have become everyday news.

In the newly formed Malerkotla district, a Sikh man has donated his ancestral land to seven Muslim families to construct a mosque. The historic town of Malerkotla has been recently upgraded as the 23rd district of Punjab.

In Moga district, Sikhs opened the doors of the local gurdwara to help Muslims organise the foundation stone laying ceremony of a mosque nearby. 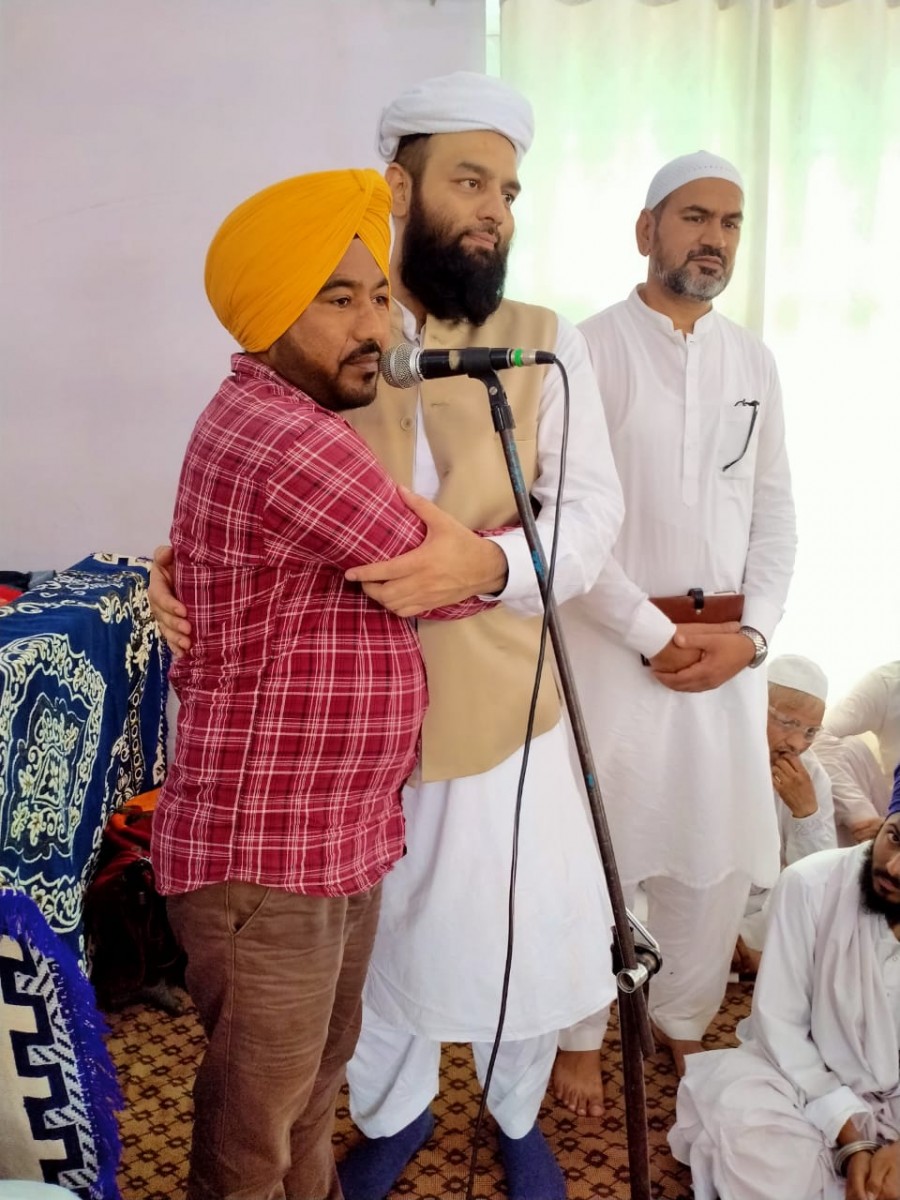 Sarpanch Pala Singh at the gurdwara during the foundation stone laying ceremony of the mosque in Bhaloor village in Moga District. Photo: Kusum Arora

Talking to The Wire, Pala Singh, the sarpanch of Bhaloor village in Moga district said that on June 13, when Muslim villagers had gathered to lay the foundation stone to rebuild the century-old, dilapidated mosque, it began raining. The mosque’s premises are around 1.5 acres.

“As it started raining, Muslims from the village approached Gurdwara Sri Satsang Sahib. There, they held the foundation stone laying ceremony. Villagers gathered within minutes and made all the necessary arrangements, including langar, and also raised funds to the tune of Rs 2 lakh on this occasion,” Pala Singh said.

He added that Muslim families had been trying for a long time to reconstruct the mosque. Although little is known about the origins of the mosque, villages believe that it came up well before Partition.

“Punjab suffered one of the worst tragedies during Partition and people were separated from their loved ones forever. We want to get the shared bond of love and brotherhood back. It hurts to see communal hatred in the country. What is the difference between India and Pakistan, if we too attack minorities?” Pala Singh asked.

He is also eager to stress that villagers do not feel that they have done anything special. “It is Muslims’ right to offer prayers as per their religious practices. They are part and parcel of our society,” he added.

Anwar Khan, one of the villagers who attended the ceremony said that as they were not aware of the history and background of the mosque, named ‘Mohammadi Masjid’ either. “We had been planning to reconstruct this mosque since 2008. This was an abandoned area and we were also facing shortage of funds but with the help of villagers, we will now be able to construct it,” he said. 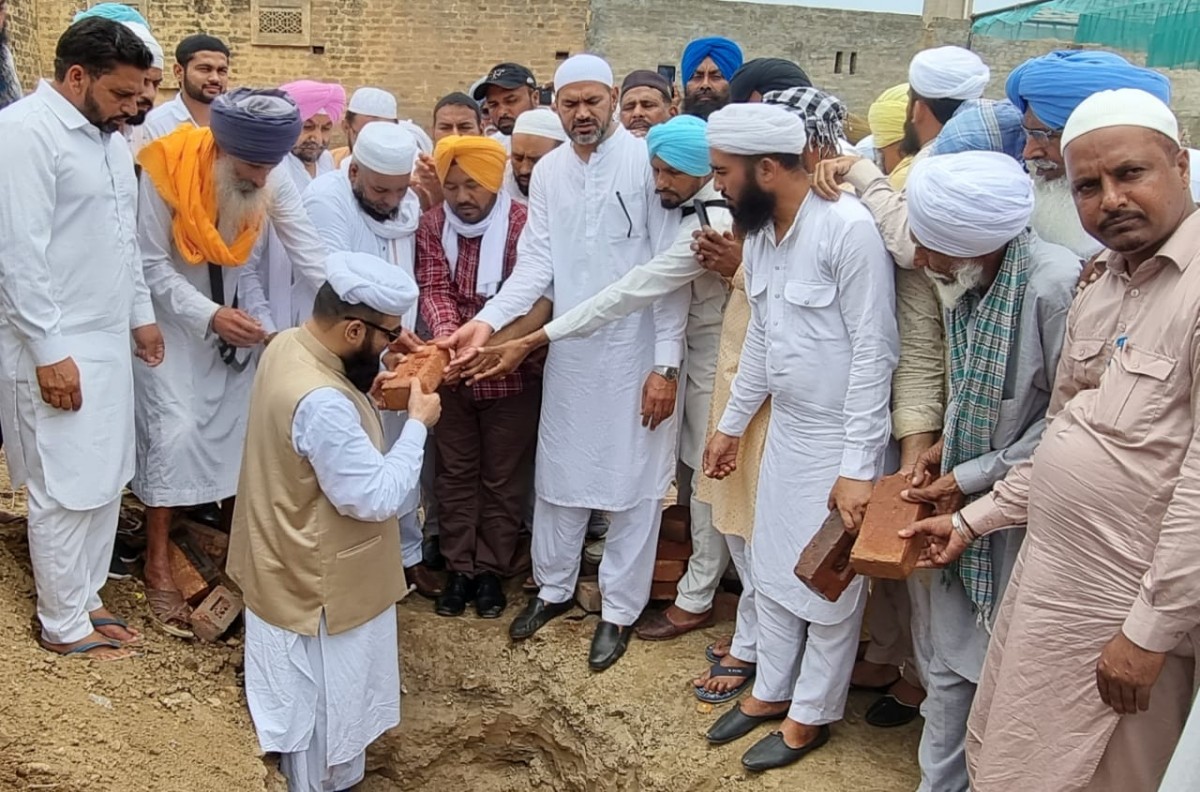 Sikhs and Muslims during the foundation stone laying ceremony of the mosque at Bhaloor village in Moga district. Photo: Kusum Arora

Muslims from Malerkotla have, significantly, been organising a langar at the Singhu border ever since the farmers’ protest started in November 26, 2020. A large number of Muslims from Punjab, Haryana and Delhi had also taken part in the ‘tractor parade’ which was held on January 26 in Delhi.

Earlier, during the anti-Citizenship Amendment Act (CAA) protests in 2019 and 2020, a delegation of Muslims from Malerkotla had reached the Golden Temple to meet the Akal Takth officiating head, Giani Harpreet Singh, to seek his support. When the delegation came out, it was time for namaaz and they performed prayers at the Golden Temple Plaza in the afternoon. Photos and video of Muslims offering prayers in Golden Temple had gone viral on social media. 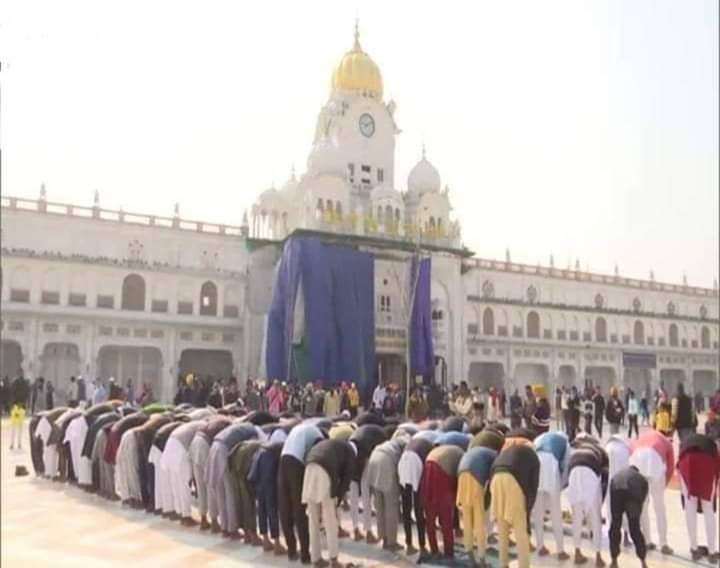 At Jitwal Kalan village of the Muslim majority Malerkotla district, farmer Jagmel Singh donated his ancestral land (six biswa) to seven Muslim families for the construction of a mosque. Jagmel’s family are longtime friends of Roshan Khan’s family. The friendship has endured for three generations.

Jagmel said that he had no idea that donating land to Muslim families for a mosque would become news. The families had not invited any media attention.

“We had common family land in the village. Around a year ago, we promised to donate our land to Muslims for the mosque. But, as the country was under lockdown last year, the project was delayed. They had been planning to buy land for some time but when I got to know about this, I spoke to my family to donate our ancestral land and they readily agreed,” he said.

Jagmel is glad that the move has brought heart-warming responses from people across Punjab and abroad. “Within days, the photos and videos were shared on social media and I have been flooded with calls. My family feels blessed that the Almighty chose us to perform this task and serve humanity,” he said. 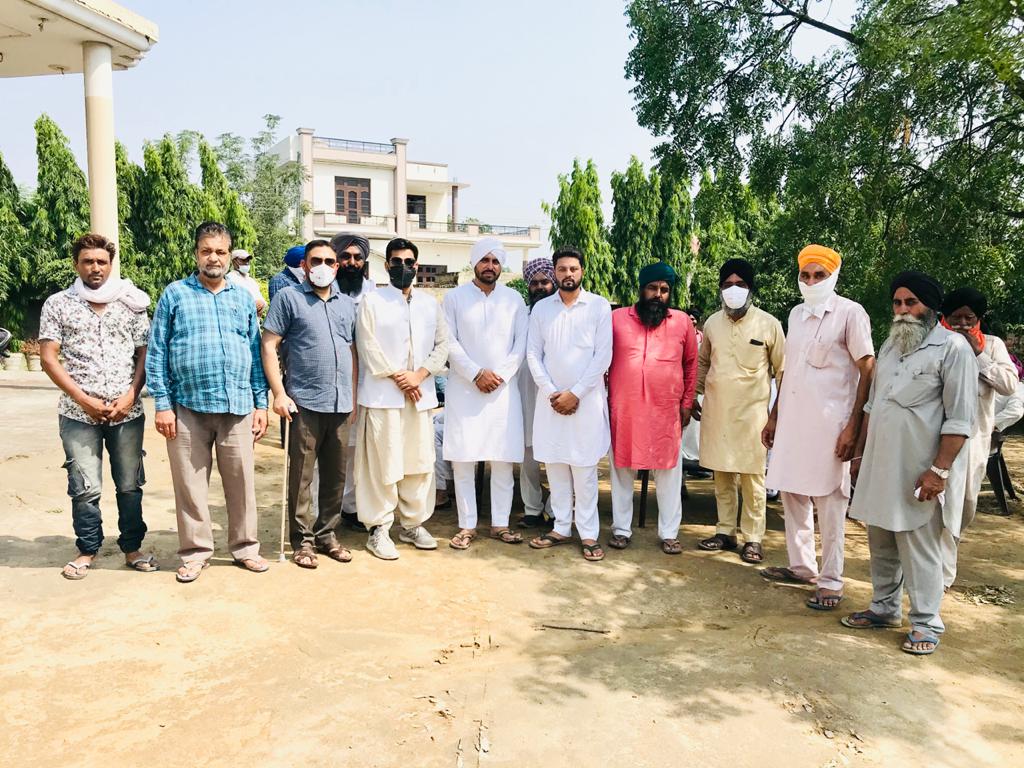 Farmer Jagmel Singh (centre, in white turban), who donated his ancestral land to Muslim families for the construction of a mosque in Jitwal Kalan village in Malerkotla district. Photo: Kusum Arora

When asked about increasing attacks on Muslims, especially mob-lynching cases in the country, Jagmel said, “How does it matter which religious structure is being constructed? The home belongs to the Almighty alone. It was their need and we got a chance to fulfil it. In the coming days, we will also organise a fund raiser to ensure swift construction of the mosque.”

Roshan Khan, Jagmel’s friend, said that all these years, they would go to a mosque in Rodiwal village to offer prayers. A nearby mosque would help, he said.

“I am friends with Sikhs and Hindus, both. Our lives are short, what will we gain by fighting? Religion has already created enough division, we should stop fighting,” he said.

Sitar Mohammad Libra, a member of the Punjab Waqf Board said that Punjab was a land of warriors, saints, sufis, peers and fakirs. “While Punjab has always promoted communal harmony, peace and love, the BJP-RSS combine have created religious divide. Who does not know that BJP-RSS survive on hate and communal politics? Punjab is a land of ibadat (prayers) and will continue to spread the message of universal brotherhood,” he said.

It is pertinent to mention here that during the nationwide lockdown last year, Muslims from Malerkotla donated 330 quintals of wheat to Golden Temple authorities. The Sikh Muslim Sanjha foundation had taken the initiative to donate wheat to Golden Temple and help the poor and migrant labourers, who were left to fend for themselves in the crisis.