'Narcotic Jihad' and the Delusions of the Catholic Church

The Christian community's support of allegations of "love jihad" and "narcotics jihad" demonstrate two things: a willingness to participate in Hindutva discourses and the impact of global Islamophobic narratives.

Pala Bishop Joseph Killarangatt, in an article published on Saturday, warned of the dangers of 'pseudo-secularism'. Photo: palaidiocese.com

In the last few days, the public sphere in Kerala has been convulsed by intense – and sometimes acrimonious – debates on the claim made during a sermon by the Syro-Malabar Catholic Bishop of Pala Mar, Joseph Kallarangatt, that there are rising cases of “narcotic jihad” (as well as “love jihad”) in the state with an explicit attempt to destroy the lives of non-Muslims.

The unsubstantiated statement is potentially explosive, for in the famed secularism model of the most religiously diverse state in India, this is arguably the first hate speech by a high-ranking religious figure across religions.

The claim and the underlying support for it among not-too-small sections of the Christian laity demonstrate two crucial aspects: the increasing ideological willingness to participate in the fascist discourses of Hindutva and the impact of global narratives of Islamophobia, fuelled also by developments like the rise of the Taliban.

The lack of any moral quibbles on the part of the Christian electorate, a minority, in voting for majoritarian projects was already evident two decades ago. Soon after the Gujarat pogrom of 2002, a Catholic Lok Sabha candidate was elected as a part of the National Democratic Alliance, the first time and the only time the BJP-led front secured an MP from Kerala.

Of course, the Christian community would argue that the roots of Islamophobia are real, pointing to the incident of Islamist extremists chopping off the hands of a Christian professor in 2010 and the conversion to Islam of a couple of Christian women whose husbands had connections to the Islamic State (IS) in 2016. But the fundamental angst behind the recent incendiary speech lies elsewhere.

Also read: How the Imaginary Threat of ‘Narcotics Jihad’ Reflects a Real Threat of Widening Divisions

It stems from a narrative of victimhood, in turn stemming from demographic fears of declining fertility and population numbers of Christians vis-à-vis Muslims and the projection that the population of the Muslim community would be double that of Christians by 2051.

The political implications of this, in terms of an increased number of seats in Muslim-majority areas and for the Indian Union Muslim League, is a major bone of contention.

The other perceived fears are regarding the rise of a business elite from the Muslim community following Gulf migration-led mobility and entrepreneurship and the challenge to the economic power of the Christians. This also leads to concerns that the Muslim minority is cornering most of the resources allocated to minorities.

As with all other kinds of imagined victimhood, these fears are unfounded. The political representation of Christians in the assembly and cabinets has shown little variation, despite the falling population, whereas Muslims are only in the recent decades moving towards proportional representation. And as demographers point out, fertility rates are going to stabilise and become even across religious communities in two decades as Kerala Muslims catch up with other communities in demographic transition.

In terms of allocation of state resources, it is specious to compare the Muslim community with the Christians as the former are way behind the latter in terms of poverty, unemployment, landlessness, education and so on. In fact, the Christians of the Syrian rite are the most advanced community, socio-economically, in the state.

The charges of love jihad in Kerala have remained unsubstantiated, despite investigations by the central agencies and the Modi government does not have data regarding love jihad for any state in India. This is what puts the bishop’s speech in the legally-prosecutable, “hate speech” territory.

Ironically, in terms of legal conversions last year, the largest number of conversions from the Christian community were to Hinduism (209) while only 33 converted to Islam; numbers which are miniscule in any case.

The imagined fear of the Muslim rise is what has driven the Christian clergy to the bosom of the Sangh Parivar discourse, even seeking the mediation of Narendra Modi in the resolution of sectarian disputes.

In a more fundamental sense, there is an affinity with Hindutva’s “ghar wapsi” worldview that, after all, even Christians are originally Hindus. This stems from the highly casteist and endogamous nature of the Syrian Christian churches in Kerala, with claims to purity and which revel in family histories of supposed conversion to Christianity from the Brahmin Namboodiris.

The Christianity of these churches is one which has no place for the Dalit or lower-caste Christian converts.

By seeking to portray a Christian-versus-Muslim divide, the bishop’s statement completely obscures the most fundamental and consequential divides in society: caste, class and gender. Hindutva is only happy to play along; to see society as riven by homogenous religious blocs.

When the Love Jihad discourse is rooted in the patriarchal control of women’s lives, it is not surprising that the church narrative – which focuses on Christian women being “lured” by Muslim men – does not talk about the ironic fact that, among the 21 people from Kerala who had travelled to IS territory, were two Christian men who had married a Christian and a Hindu woman respectively and then converted to Islam.

In the age of globalisation, as the scholar Arjun Appadurai has contended, deterritorialisation or the “exaggerated and intensified senses of criticism or attachment to politics in the home state” of the diaspora is a major driving force of global religious fundamentalisms.

Here, there is also a reversal. The Christian laity in Kerala is reacting to global developments and feeling anguished by the attacks on Christianity elsewhere, whether it be the killing of Christians in Sri Lanka by Islamist terrorists, the conversion of the Hagia Sophia in Istanbul to a mosque or the Palestinian retaliation to Israeli military strikes.

When the Church participates in the global Islamophobic discourse of narcotic jihad, and Islam as the evil “other,” it also glosses over certain fundamental facts.

While some Islamist terrorist groups and drug lords have indeed used the ostensible religious principle of waging war on the West using drugs, – and around 90% of the world opium comes from Afghanistan (which itself is a product of complex set of factors including Western imperial intervention) – in reality, the global narcotics trade is one of most sophisticated networks of criminality in the world. It involves an estimated one million traffickers of many nationalities, ethnicities and religions. In the early 2010s, the world’s biggest drug cartels were located in Mexico, Japan, Russia, Italy and Israel.

More importantly, it ignores that some of the worst sufferers of narcotics addiction are Muslim nations themselves. Iran, Afghanistan and Pakistan individually consume more opium than India. As a 2010 UN Report on drugs showed, 42% of the world’s opium consumption took place in Iran alone. Nearly 10% of Afghan children under the age of  14 tested positive for drugs, while 700 people die from addiction daily in Pakistan.

What is most ironic is that the bishop’s sermon came at the same time as Pope Francis’s visit to Hungary where, in an open critique of right-wing nationalist Viktor Orbán’s anti-immigrant (especially anti-Muslim) rhetoric, he said, “The cross, planted in the ground, not only invites us to be well-rooted, it also raises and extends its arms towards everyone.” 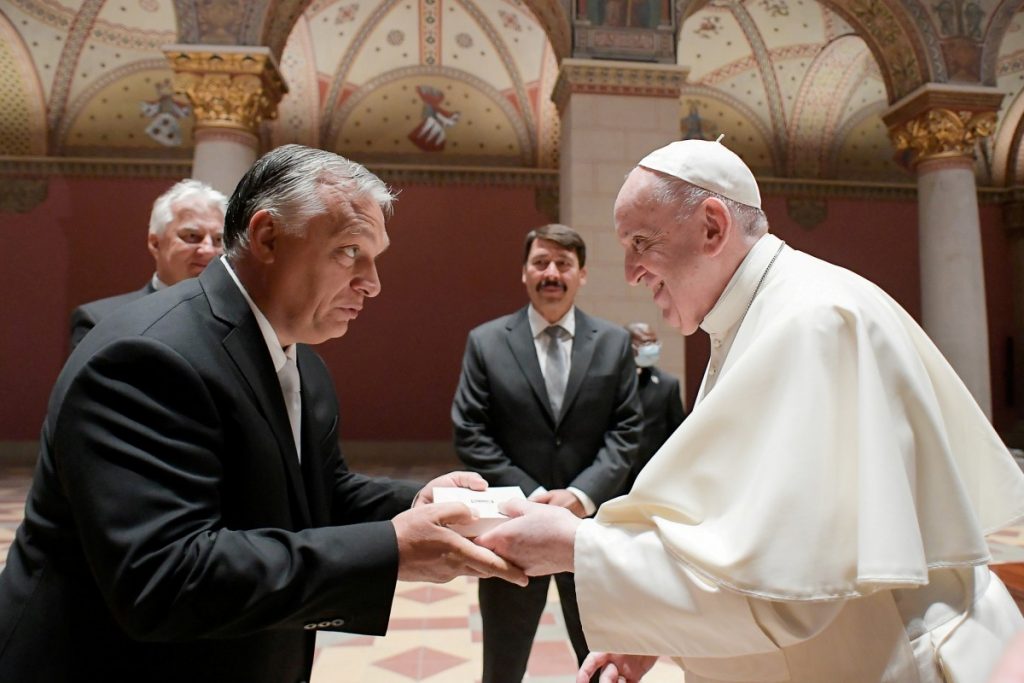 The Syro-Malabar Catholic Church in Kerala, which is roused by the supposed global affronts to Christianity, is apparently unmoved by the extraordinary steps taken by its own Pope in the last few years to reach out to the Muslims, including the papal visit to the Arabian Peninsula for the first time in history.

The words of the bishop are indeed a historic dark moment in Kerala’s secular polity. And the weak-kneed response of the CPIM government, with an eye on the Christian vote, shows that a de-radicalised communist movement will struggle to ideologically counter an ascendant Hindutva language.

Yet, there are silver linings in the gathering clouds. Many denominations of the Christian church, including various Syrian ones, have condemned the bishop’s statement; Catholic nuns, who had earlier mounted a strong resistance against sexual abuse in the church, now protested against Islamophobic speeches; one diocese of the Syrian Catholic diocese itself withdrew an Islamophobic booklet and some of the most important religious leaders of the Muslim community presented a voice of toleration and love instead of being provoked.

The tectonic shift in India in the last seven years has been the normalisation of the language of Hindutva in the public sphere and the reflection of that is seen in social media discussions, even in Kerala, which is among the last frontiers against Hindutva in India.

The crucial difference is that Hindutva is yet to make any electoral inroads, including amongst the Christian voters. The shock and anger at the statement of the bishop and the robust response from civil society may yet carry the day for Keralan exceptionalism when it comes to religious amity and co-existence.

Nissim Mannathukkaren is with Dalhousie University, Canada and is the author of the recent book Communism, Subaltern Studies and Postcolonial Theory: The Left in South India (Routledge). He tweets at @nmannathukkaren.