In Mohan Bhagwat's India, Everyone Is a Hindu

The RSS head's recent speech is testament to a vision where the lines between being Indian and being Hindu are blurred haphazardly. 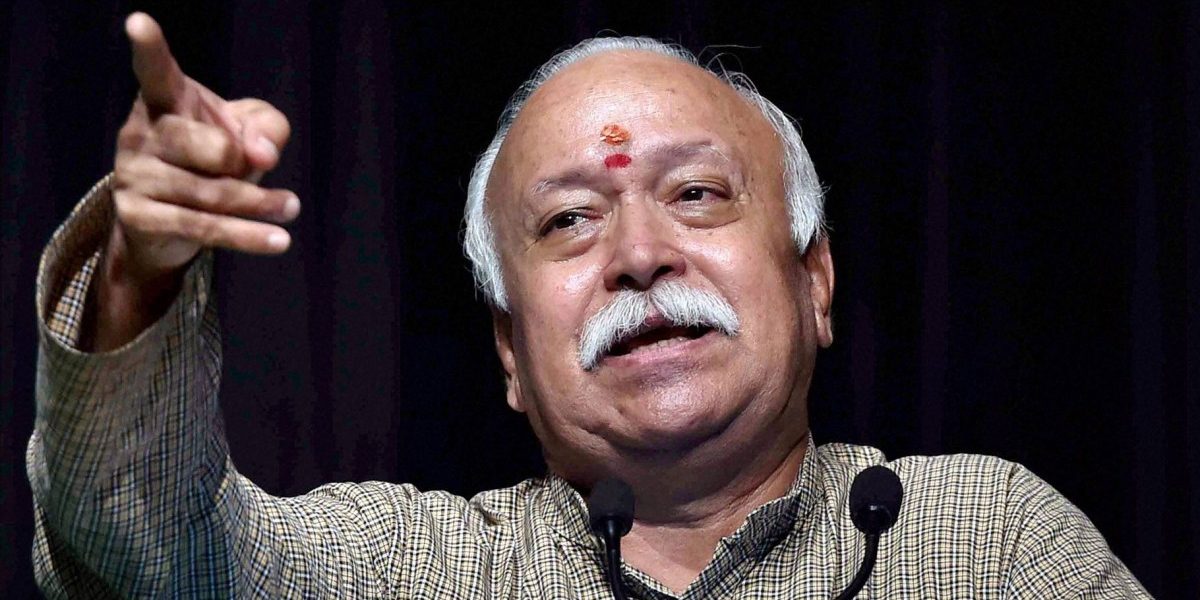 The Sarsanghchalak of the Rashtriya Swayamsevak Sangh, Mohan Bhagwat, gave a speech in Hyderabad in which he defined Hindus and Hinduism totally differently. The speech was delivered on Christmas day, when the world was celebrating the birth of Jesus Christ, an universally recognised prophet of peace and non-violence.

According to him, all Indians i.e. 1.3 billion people, are Hindu. A Hindu is one who lives in this (Indian) land and must worship Bharat Mata and also love the soil and water. That means all Indians, apart from worshipping or praying to the god that they believe in, must also worship Bharat Mata as the goddess that RSS has constructed.

Therefore, all Muslims, Buddhists, Christians, Sikhs, Parsis and so on should worship two forces, one god and another, Bharat Mata.

While registering their names in the National Register of Citizens or in school or in any other record as against the column ‘Religion’ they must write Muslim-Hindu, Buddhist-Hindu, Christian-Hindu, Sikh-Hindu, Parsi-Hindu and so on. They can then follow their book, their food culture, their marriage system.

This time he has not asked them to worship the cow and give up eating beef. He has also not talked about Uniform Civil Code.

Whosoever now wants to take to Islam anew or Christianity or Buddhism or Sikhism or any other religion must mention Hindu invariably as part of their religion.

Also read: What if This Is the Hindu Rashtra?

Mohan Bhagwat has departed from the earlier definition of Hindutva given by Savarkar, Gedgewar, Golwalkar and so on. Earlier Hinduism and Hindutva appeared in some sense, different.

Bhagwat has taken out the political ideological content from the discourse. This formulation, according to him, sustains the inclusiveness that Muslims, Buddhists, Christians, and Sikhs want. Maybe this will also solve the CAA-NRC problem. Those Muslim migrants or refugees should simply mention against their names, ‘Muslim-Hindu’. They then can pray to their Allah in Arabic but at the end of the prayer they must, perhaps, say ‘Bharat Mata ki jai’.

It appears that Mohan Bhagwat has emerged as greatest theoretician of Hindu philosophy, after Kautilya and Manu. Both Kautilya and Manu provided the basis for the kingdoms of Maurya Chandra Gupta and Pushyamitra Shunga by writing their own theoretical texts, Arthashastra and Manudharma Shastra. As Kautilya and Manu brought Chandra Gupta and Pushyamitra to power with their theories, Mohan Bhagwat has brought Narendra Modi to power. In his living times Amit Shah is likely to become Prime Minister after Narendra Modi. The existing BJP majority in the parliament and two term rule itself is Mohan Bhagwat’s philosophical strategic contribution.

According to Mohan Bhagwat, as he expounded his new theory at the Hyderabad meet, human beings of the world could be divided into three categories. They all desire three kinds of victories. They are:

“Asura, Rajasika and Dharma. People belonging to the Asura category lived in sadness, made others sad, caused violence, yet achieved victory, which would, ultimately cause the destruction of everything. And those belonging to the second category did things that were self centred. They used others to gain riches and pride for themselves. The Sangh and India believed in Dharma victory, where people lived for the happiness and well being of others, and did not want heaven, kingdom or anything for themselves.”

This is a highly creative theory that protects believers from the belief of heaven and kingdom. Mohan Bhagwat has liberated his Hindus from the desire of heaven and also kingdom.

These two desires caused so much violence that genocides took place because of them. As of now whether they are Muslims, Christians or Buddhists or Sikhs living as pure Muslims, or pure Buddhists, or pure Sikhs ‘they want heaven after death and kingdom (political power) in this life.’

According to him such forces also commit violence. For the first time he has told the world that RSS and BJP karyakartas (workers) do ‘not want heaven and kingdom’. Like the RSS karyakartas, people who want to get out of the desire of heaven and kingdom should have a Hindu tag along with any other religious tag that they have. He is not asking them to either convert to Hinduism, nor is he asking those who converted from Hinduism to re-convert. 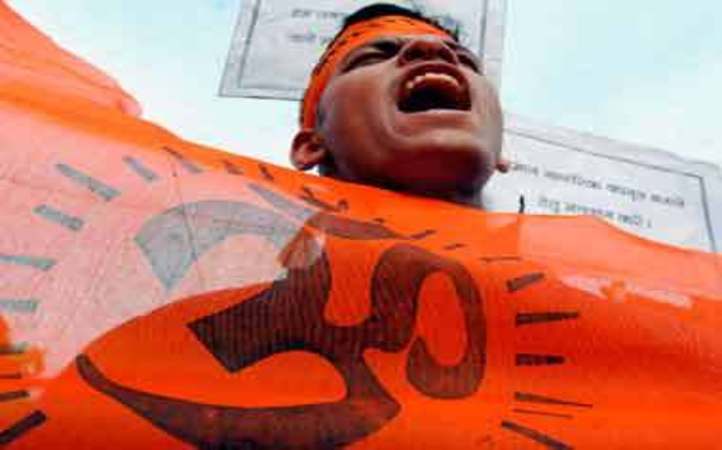 They should simply add a new tag ‘Hindu’ to their existing religion.  If they do not do so, there will be serious consequences, of course only of ‘Dharma’ violence.

The only question is, why did RSS establish the BJP if not for capturing the state power (kingdom) and why does it keep on working for its victory, as against other political parties, which believe in secularism and state power, which, according to him, are sinful activities?

He tells the world that his organisation never participated in Asura and Rajsika activity in its lifetime of 95 years. Does he not consider its rioting period before 2014 as a period of Dharma? Does he mean that Advani’s Rath Yatra and the riots that followed in the 1990s are Asura and Rakshasa activities? Then why does his own BJP government does not send Advani and his team to jail?

Bhagwat’s new Hindu theory gives an interesting twist that Asuras and Rajsikas are not in Bharat, as the ancient Hindu texts told us. They are neither lower castes nor Muslims nor Christians of India but they are outside India. If the Indian Muslims, Buddhists, or Christians do not add Hindu to their religious tag perhaps they would be considered as Asuras and Rajasikas who have migrated from outside.

He has given enough scope for their transformation with a new mode of conversion. If they do not transform, perhaps, his Dharma violence follows its own course.

Also read: A Temple Over the Babri Masjid Cannot Be Holy

This is a new Bharat of Mohan Bhagwat. He has a grand design for the future of the children of the nation. The Hyderabad theory will be interpreted and re-interpreted. Media has reported his theory very prominently. The TV channels telecast his speech live.

Let us wait and see how other religious intellectuals, secular intellectuals and the Western scholastic scholars react to this theory. His theory has thrown a serious threat to Indian minorities. Many minority leaders have already expressed serious apprehensions about this kind of one Hindu nation theory.

For the first time in known Indian history, millions of people, and especially minorities, have come out to the streets to oppose the CAA and NRC. Mohan Bhagwat scares them more with this theory.

Earlier he scared the Scheduled Castes, Scheduled Tribes and Other Backward Classes with a theory of ‘no reservation in India’ in the garb of reviewing the reservation system itself. The question is: can India as a nation survive with this kind of dangerous religious theories? What happens to our secular constitution? My fear is that the very idea of India is in serious threat and Mohan Bhagwat has very deliberately posed that very threat from his position.

Social activist and author Kancha Ilaiah Shepherd is a political theorist who taught at Osmania University till 2012.