We need to make visible the caste violence being furthered by 'savarna' Syrian Christians, as they pitch the fiction of unified Christianity in their rhetoric against Muslims.

A church in Kerala. Photo: ademussey/Flickr, CC BY 2.0 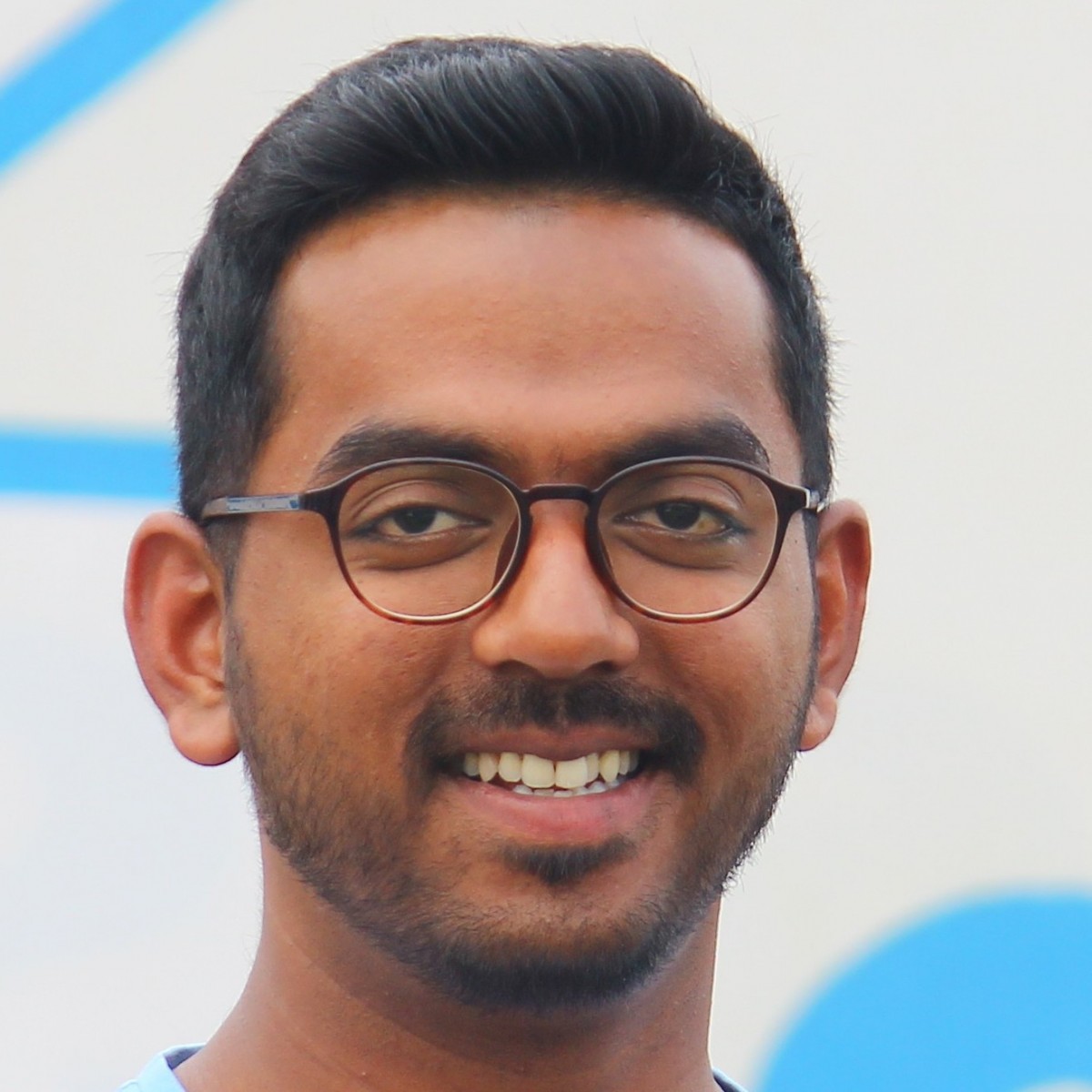 The solo Indian flag that made an appearance among the vast swathe of Trump supporters storming the Capitol building in Washington D.C. recently, caught the attention of many. It was even more of a surprise when it was revealed that a Malayali Christian named Vinson Palathingal was responsible for it.

However, truth be told, Palathingal is just one of the many Malayali Christians who are fervent advocates of the Christo-racist nationalism represented and championed by Donald Trump and his band of supporters. For those wondering how an exclusivist White supremacist anti-Muslim ideology and rhetoric that underpins Trumpian politics appeals to these migrants and their ilk from the Global South, the answer may be found in the latter’s own social location within the Kerala society in India.

Beyond the general term Christian, there lies a more nuanced identifier for the community that people like Palathingal hail from – Syrian Christians. A traditionally privileged and landed community, they claim their origin from the proselytisation mission of Jesus Christ’s disciple St. Thomas in the first century CE. There are visible tendencies among the Syrians, who are also called St. Thomas Christians, to go back and revive what they imagine to be their Syriac liturgical tradition.

The most popular myth about their origin is that they hail from Brahmins who were proselytised by St. Thomas. While inquiring into the veracity of these claims is not what I intend to do in this article, I think it is indeed an indication of the “superior” status that they seek to utilise to distinguish themselves from their fellow Christians who are mostly from “lower” castes.

Also read: Kerala: BJP-Church Relationship Improves, But Will it Impact the Assembly Elections?

Cambridge historian Susan Bayly, in her book, Saints, Goddesses and Kings, points out that in the pre-colonial era, Syrian Christians were very much incorporated into the savarna sections of the caste hierarchy within the Kerala society. Although the tectonic changes brought into the social organisation of Kerala by the colonialists altered this position, and Syrian Christians switched from being mostly a martial and trading group to one of land-owning agriculturalists, they were still able to retain their traditional privileges. 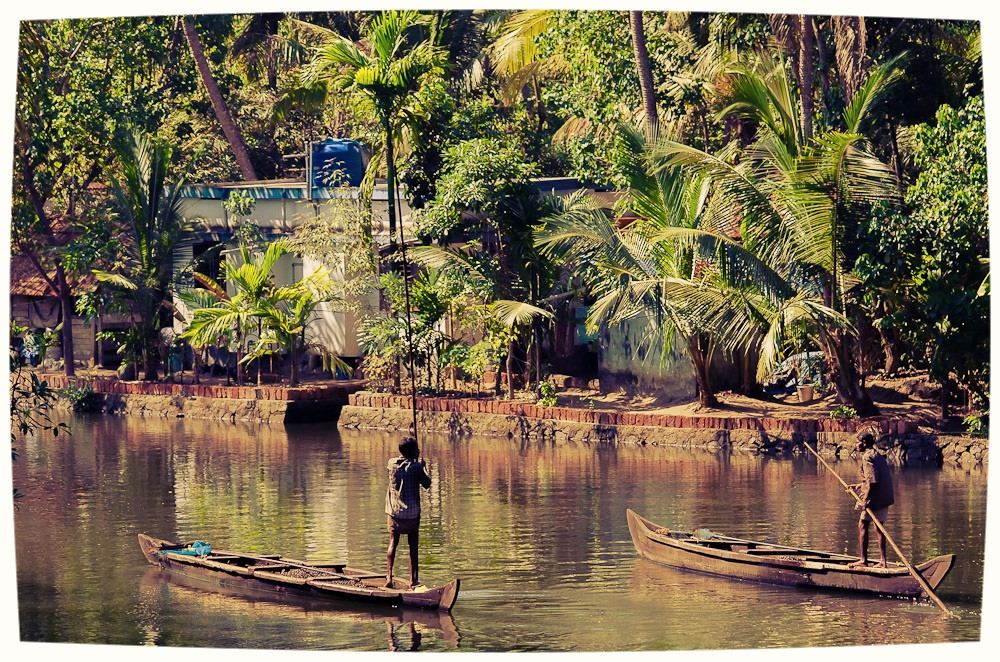 K. C. Zachariah points out in his book, The Syrian Christians of Kerala: Demographic and Socio-Economic Transition in the 20th Century (2006), that the community is the largest per household landholder in the state. They also lead other prominent groups in terms of housing. They also do relatively well in terms of access to both government jobs and educational institutions. Citing the Kerala Migration Study (1998) conducted by the Centre for Development Studies, Zachariah concludes that “Syrian Christians are the most advanced community in Kerala (p197)” with respect to overall socio-economic indices.

A simplistic application of the category of caste in the case of Syrian Christians might blunt the analytical edge. However, for the purposes of this article, I will stick to the notion of caste, for want of a better terminology, as it is still used as a method of social stratification.

For instance, Syrian Christians practice strict endogamy, which is central to preserving hereditary socio-economic capital. This practice is so strongly adhered to that Syrian denominations that are in communion with the Catholic Church still do not enter into matrimonial relationships with their fellow Latin Catholics who are mostly considered “lower” castes, belonging to fisherman or Dalit communities.

The tropes of ‘love jihad’, halal food, and minority benefits

However, despite being amongst the most privileged in Kerala society, recently, the Syro-Malabar Catholic Church (the largest denomination among the Syrians) kicked up a public frenzy claiming that ‘Christians’ are being systematically discriminated against, by the two mainstream political parties who come to power in Kerala alternatively. The major accusation is that the state governments favour Muslims over Christians, when it comes to resource allocation through minority benefits.

This rhetoric is clearly based on a reductionist understanding of ‘minority’ as a purely numerical category, rather than as one referring to a community that is vulnerable or threatened by the majority power structure. This tendency is also witnessed in the hype over the imagined ‘love jihad’ campaigns by Muslims to ‘snatch’ (Syrian) Christian women, even after central and state law enforcement agencies repeatedly found no evidence to prove the same. Priests and laity leaders constantly issue advisories to parents to protect their daughters from falling for such non-existent ‘love jihad’ traps.

As surprising as it would seem, this has also spilt into campaigns various Syrian Christian groups calling for a boycott of restaurants and shops selling halal food items. The recent decision by Turkish President Erdogan to turn Hagia Sophia into a mosque is portrayed as another instance of a global Muslim scheme against Christians, conveniently hiding the fact that 13th-century crusaders were the first to ransack Hagia Sophia. The Orthodox Patriarch had to run for his life while the marauding Catholics converted Hagia Sofia into a Catholic place of worship. 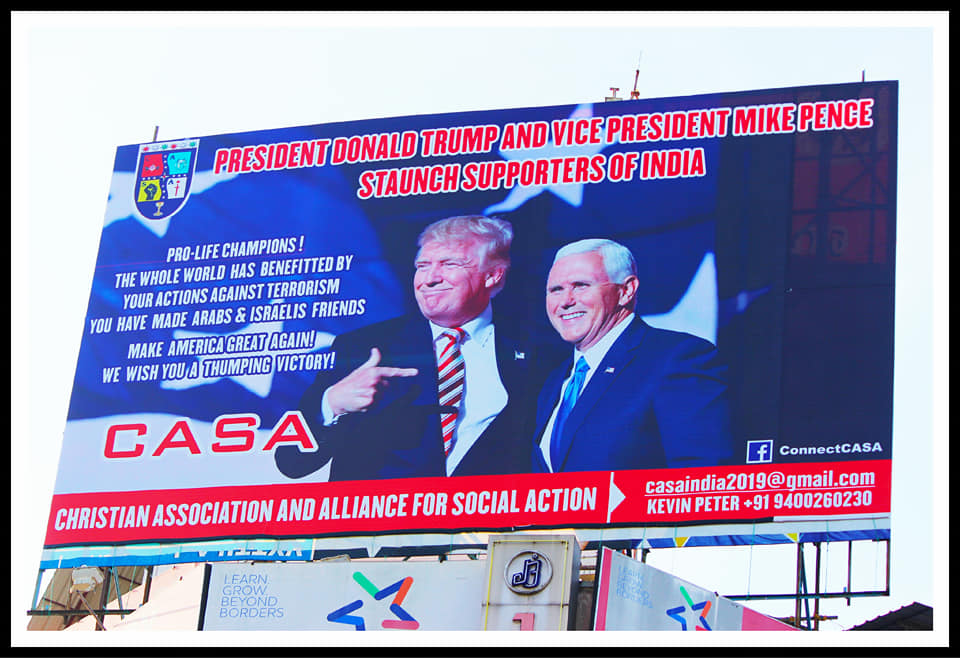 A billboard erected by the Christian Alliance for Social Action in Ernakulam, Kerala, in support of Donald Trump. Photo: Facebook/ConnectCASA

Just like Vinson Palathingal in the US, there were community groups in Kerala that put up billboards professing their unflinching support for Trump and prayed for his return to power. Moreover, Syrian Christian family WhatsApp groups and social media are teeming with conspiracy theories targeting Muslims. In many of the cases, this communal vitriol is led by Syrian Catholic priests themselves, like Noble Parackal, who is also a popular face on social media. It suffices to say that these conspiracy theories and victim narratives have found legitimacy and a life independent of reality.

Mainstream political parties in Kerala are all wary of this reality, especially with state assembly elections just around the corner. Through various ways, the community has also started publicly positioning BJP as a potential ally and political alternative. On its part, the BJP, which is struggling to establish a foothold in the state with 47% of the population comprising minorities, has been trying to woo Syrian Christians in a major way. The fact also remains that the first and last MP to win for NDA from Kerala was P. C. Thomas from the Syrian Catholic community, in 2004.

Among all the various Syrian Christian denominations, why is it that the Syrian Catholic church is expressly, and almost exclusively, the proponent of this anti-Islam campaign? Further, what are the repressed insecurities of the community that has manifested in such a phenomenon?

Most importantly, at a time when Hindu majoritarianism is extending its grip over India, why is it that the Kerala Christian group has chosen to target another fellow minority group, instead of the Hindu nationalists? Studies need to address this deep-seated insecurity of the community to unpack the unconscious and underlying reasons manifesting in the current public outburst of anger aimed at Muslims.

Antagonism towards Muslims is not new and has been a popular, but private, sentiment among the members of the community majorly in the erstwhile central Travancore region. As such, one needs to ask why, suddenly, this made its entry into the public sphere with such fervour. For one, it is clear that ‘love jihad’, the conversion of Hagia Sophia into a mosque, halal food controversy, terrorism etc, have been used instrumentally to plug the local antagonism towards Muslims into the global discourse, adding much-needed legitimacy to the anti-Muslim social imagination. This also helps in rhetorically translating the antagonism in such popularly recognised ‘common sense’ terms that would look normal and legitimate.

One last and most important facet of this phenomenon I wish to highlight is how the Syrian Christians, championing this narrative, always mobilise the entirety of ‘Christianity’ in their rhetoric. This is contradictory. This calls for critical attention, considering how Syrians have always fervently tried to distinguish themselves from the rest of the Christians in everything else that matters. Their exceptionalism and savarna mindset clearly point to a Christianity-caste nexus that actively facilitates the maintenance of caste privileges.

Even their origin stories, related to the first century CE proselytisation mission of St. Thomas, is itself used to distinguish them from those mostly ‘lower’ caste faithful, who are pejoratively called ‘converted Christians’ referring to their more recent turn to the faith. The extent of this caste distinction and discrimination becomes amply clear while considering the fact that Syrian Catholics, with full approval and encouragement of the clergy, refuse to even marry Latin Catholics.

To avoid appearing explicitly casteist, myths like family ‘cultural differences’ which are pitched as monolithic and hereditary, are cited. Moreover, this caste blinded-ness is also a reason why the self-proclaimed protectors of ‘Christianity’, fighting against a so-called global Muslim conspiracy, choose to ignore the long history of violence inflicted by Hindutva organisations on Dalit and other ‘lower’ caste Christians in other parts of India. As such, it is imperative that we need to make visible the caste violence being furthered by ‘savarna‘ Syrian Christians, as they pitch the fiction of unified Christianity in their rhetoric against Muslims.

Bipin Sebastian is a PhD student at Northwestern University, Evanston, Illinois. He studies discursive formations on religion, caste and secularism in India and can be reached at bipinsebastian@u.northwestern.edu. For those interested in exploring the question of Christianity and caste in Kerala more, this author recommends the works of scholars like Sonja Thomas, Sanal Mohan and Carmel Christy, among others.