As India Protests CAA, a Reminder from Sikh History of Fight Against Oppression

December 1704 is when Guru Gobind Singh triumphed against a massive Mughal-Rajput force in the battle of Chamkaur. But it is also the month his four young sons were martyred. 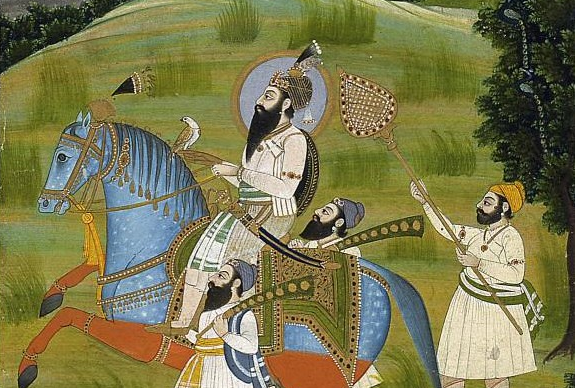 Massive demonstrations are taking place across India against the Citizenship (Amendment) Act passed by parliament earlier this month. In Delhi, Aligarh, Assam and elsewhere, the Indian ruling elite has unleashed violence on youth and students. Thanks to videos made by the victims, one can actually see the police brutally attacking young men and women. Curfew has been imposed in many places, and internet and mobile phone services have been suspended in some districts of many states. An all India protest is being planned for Thursday. Indians abroad, especially in Europe, Australia and North America, have also raised their voices against this law in rallies, teach-ins, seminars and demonstrations. The Indian ruling elite’s strategy is to divert, distract and divide the people – and attack their struggles for dignity and justice, renewal and renovation. 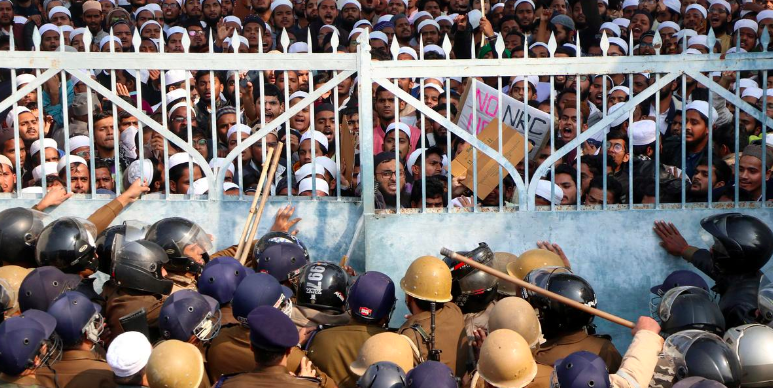 Students of Darul Uloom Nadwatul Ulama, an Islamic university, are stopped by police during a protest against a new citizenship law, in Lucknow, India, December 16, 2019. REUTERS/Stringer

Today is an important day in the history of Punjab and especially the Sikhs. On this day in 1705, Guru Gobind Singh left Anandpur Sahib – the place established by his father, Guru Tegh Bahadur In 1665. The young Gobind Rai was only nine years old when Guru Tegh Bahadur was beheaded in 1675 on the orders of Aurangzeb. It is here that the Khalsa was established in 1699, by Guru Gobind Singh. In 1704 after fighting many battles with the Rajput rajas and the forces of Aurangzeb, Anandpur was laid siege by the joint forces of 22 Rajput rajas and the Mughals. The Rajput rajas had written to Aurangzeb that Guru Gobind Singh was destroying their religion by denouncing caste oppression, preaching against rites, rituals and idol worship.

Anandpur, just like Kartarpur, that was settled by Guru Nanak, practised and preached against caste oppression and exploitation. People from the surrounding areas were coming to Anandpur to live there, where like Nanak, Gobind Singh had established a model city. Here Sikhs and non-Sikhs worked together and shared the wealth produced by their common labour. It was a model of new society where there was no discrimination based on caste, creed, gender. It was the continuation of the experiment started by Nanak and other gurus in Khadur, Goindwal, Amritsar, Tarantaran etc.

For more than six months, Anandpur was surrounded by a large army. Aurangzeb’s scribes describe the combined forces of the governor of Sirhind, the governor of Multan and 22 Rajput rajas of Shivalik as comprising more than 700,000 soldiers. A peace deal was agreed and the Guru was guaranteed safe passage with his family and other people. As they left in two groups, they were attacked from behind on the river Sirsa, which was flooded. His two younger sons and mother were separated during the crossing of the Sirsa. His mother Gujar Kaur, close to 80, with two grandsons, Fateh Singh, 8 and Zorawar Singh, 5, walked along the banks of the Sirsa for several miles and came to the hut of Karim Baksh, a Muslim boatman. He gave them shelter and looked after them. In the morning he went to the village and brought some food for them.

Karim Baksh later on went to another village and brought back Pandit Gangu, who had worked as a cook in Anandpur and knew the Guru’s family. He took them with him. During this time, he saw some gold coins that Gujar Kaur had with her, got greedy and betrayed them to Wajid Khan, the governor of Sirhind.

Wajid Khan’s soldiers handcuffed her and the two boys and made them walk some 20 miles from Morinda to Sirhind, imprisoning them in what is called Thanda Burj (cold minaret). Moti Ram, a well-wisher of the guru, sold his wife’s jewellery, bribed the soldiers and brought food and milk to them.

I am greatly inspired by the mother of Guru Gobind Singh, Gujar Kaur or Gujari. Her son was only 9 years old when her husband was beheaded. What kind of spirit, courage and strength must she have had to bring up young Gobind Rai against such odds? She carried on the legacy of the gurus and brought him up to be Guru Gobind Singh.

After they were imprisoned, the two brothers were taken to the governor’s court the next day. Wajid Khan asked them to submit to his dictate. Both of them refused. According to legend, Wajid Khan asked the qazi what punishment should be given to them. The qazi pronounced the death sentence. But the nawab of Malerkotla, Sher Mohammad Khan, who was present, lodged a vehement protest and told the qazi that in the Quran and Sharia there is no provision for death penalty to children. Pandit Sucha Nand, an official of the governor said the two boys were not children but sapoliye (young snakes) and must be destroyed. He asked the qazi to classify them as sapoliye, not as children, and sentence them to death. On December 26, 1704, Fateh Singh and Zorawar Singh were laid into a wall. Gujar Kaur was pushed down from the cold minaret and died.

In the meanwhile, Guru Gobind Singh, not knowing the fate of his mother and two sons, came to a small village, Chamkaur, with 40 soldiers and a zamindar, Raja Roop Chand, offered him his fort to take shelter. The next morning, this small fort was surrounded by a massive army. A great battle ensued. Ajit Singh 18, and Jujhar Singh, 14, the two older sons of the guru died in the battle. Guru Gobind Singh with three of his men broke through the encirclement. The battle of Chamkaur is considered to be one of the greatest battles in the annals of military history, in which Guru Gobind Singh and his 40 soldiers faced tens of thousands of soldiers and broke out.

Guru Gobind Singh with his three companions spent the night in the jungles of Machhiwara and is said to have composed a famous shabad – ‘Mitra Piyaryan Nun’. Here Ghani Khan and Nabi Khan, two brothers and his followers from Machhiwara, came and took him to their house. Gurdwara Ghani Khan stands there now. They disguised him as a peer and came to Dina Kangar, a village of Barars, who offered them refuge. It is here that he wrote his famous letter ‘Zafarnama’ to Aurangzeb. 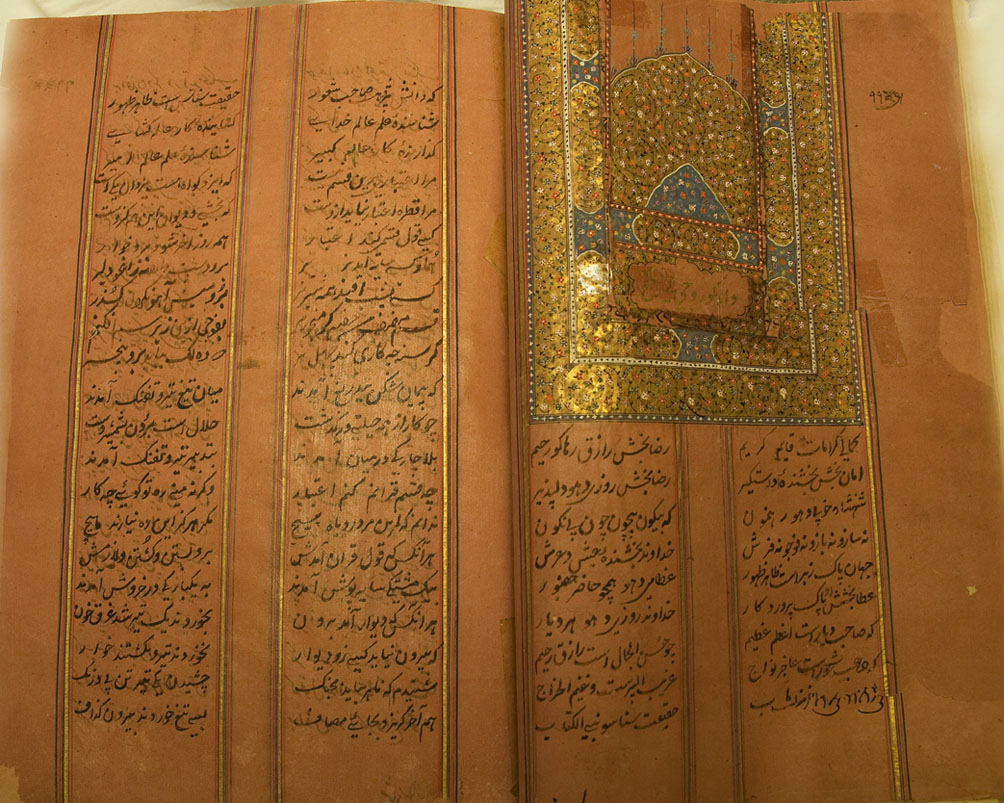 From here, they moved to Muktsar, where they were joined by Bhag Kaur, a great general of the Guru with her soldiers. From them, he learnt about the death of his two younger sons. In a decisive battle, they defeated the Mughal and Rajput armies.

Sikhs commemorate the month of December as Martyrs Month because of the martyrdom of the soldiers who fought in Chamkaur Sahib, the four sons of Guru Gobind Singh, his mother Gujari and their courage. They are inspired by them to fight against oppression.

Also Read: Malerkotla, Where Tolerance is a Way of Life

It is not a coincidence that hundreds of people from Punjab marched towards Kashmir on International Human Rights Day this month to protest against the continuing lockdown in the Valley. They were stopped on the border by the security forces at Lakhanpur. The marchers wanted to go to Lal Chowk and express their solidarity with the Kashmiris.

Jaspal Singh is a Punjabi writer and philosopher.