Book Review: Reading 'The Gita' Without Glossing Over Its Contradictions

In 'The Gita for a Global World: Ethical Action in an Age of Flux', author Rohit Chopra provides a compelling reason for reading the ancient text although it has been weaponised by the Hindutva brigade to be hostile to 'others'.

A San Francisco-based Indian academic Rohit Chopra tries to look at the troubled 21st century through the lens of Bhagavad Gita to find a moral focus and metaphysical assurance to understand the troubled times we are living in. As an Indian living in America, he is concerned most about the situation in the two countries wracked by right-wing politics, dominated by Trump Republicans in the United States and the Bharatiya Janata Party (BJP)’s Hindutva brigade in India. He is quite aware that cultural texts like the Gita have been weaponised by the Hindu right-wingers in India. So he chooses Mahatma Gandhi and his reading of the Gita as a way to make sense of the Gita as well as of the world around him.

He identifies two chief characteristics of the Gita, gleaned especially from Mahatma Gandhi’s reading of it, as that of ‘nishkama karma” or acting without seeking reward, and the moral duty to fight which Gandhi had identified as the struggle between good and evil within one’s own self. He reminds that it was this moral aspect that anchored Gandhi’s struggle against the colonial power as well as against fellow Indians because he believed in the pre-eminence of moral principles. 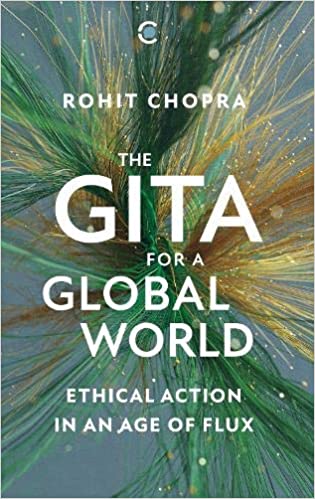 The Gita For A Global World: Ethical Action In An Age of Flux by Rohit Chopra, Publisher: Context, Westland Publications. Photo: Amazon.in

He goes beyond the modern Indian context of the text. He cites Robert Oppenheimer, the father of the atom bomb, recalling Krishna’s pronouncement in the Gita when he saw the test explosion: “Now I become Death, the destroyer of worlds.”

He also tries to show that the Gita has been a global text, familiar to many outside India, especially in the West, like “the sayings of Rumi, the Tao Te Ching, Omar Khayyam’s Rubaiyat, the One Thousand and One Nights, or, more recently the aphoristic wisdom of spiritual pop stars like Paul Coelho, the Dalai Lama and Deepak Chopra”.

But, at a deeper and higher level, he agrees with writer Amit Chaudhuri tracing “the concept of disinterestedness as a philosophical and literary trope in the Western intellectual tradition to the influence of the Gita following its translation into European languages”.

Dealing with ‘difference’ and ‘other’

But it is not this abstract universal concept emanating from the Gita that the author wants to pursue. He identifies the issue of ‘difference’ as the underlying principle of global politics and culture, and this principle of difference is sought to be transformed into the ethical struggle between the self and the other, within oneself as well as in the external world. It is this ethical dimension of the fight between self and other, where the ‘other’ is not the absolute evil that is made out in the polarised politics of either Donald Trump’s America or Narendra Modi’s India, that he thinks provides the space for dealing with differences.

He realises that the Gita does not stand up very well when the criterion of difference is applied, because it is perched in the dominant system of the caste system as Ambedkar was quick to point out. It is on this point, he acknowledges that Gita does not have all the answers.

“If Gandhi found in the Gita the resources for a universal theory of good versus evil and an overarching philosophy of life, for Ambedkar the text remained politically regressive in its valorisation of the inequities of the caste system.”

Also read: The Gita and Gandhi’s Decision Against Violence

While wondering as to why Gandhi’s reading of the Gita was not influential in contemporary India, he notes the fact: “Adherents of Hindutva or Hindu nationalist ideology see absolutely no contradiction in invoking the Gita as proof of their universalism while expressing the most hostile sentiments towards Muslims, Christians and Dalits.”

The author rues the fact that the Gita  “has not necessarily contributed to widespread social transformation with regard to caste, gender equality or communal harmony…”,  and he is firm in his belief that a reading of the Gita “must be scrupulous in refusing to erase or sidestep those aspects of the text that contradict a politics of inclusion and diversity”. The question arises as to why persist with a reading of the Gita with its contradictions.

A public intellectual in India faced with the problems of the text that runs directly opposite to the spirit of equality in the modern world would probably conclude that the Gita has little or no value. But Chopra seems to feel that there is a need for a text like Gita to anchor contemporary debates about values and existential dilemmas.

He writes that “the tensions within the Gita…may not be fully resolved, we can approach the text with the possibility and hope that it may still be able to meaningfully contribute to modern-day debates about differences.”

But there is a compelling logic behind his decision to persist with the reading of the Gita. He believes that Gandhi’s ethical politics is anchored in the Gita and that to retain the Gandhian perspective it would be necessary to use the Gita as the locus classicus. He concludes his book on an optimistic note: “The Gita sings to us in many voices, and we should listen to all of them. One of the especially important voices in which it sings is that of Gandhi.”

Chopra reveals a nuanced approach to texts, where you do not accept or reject them because they conform to your worldview or not. He seems to value the importance of texts which present continuity of tradition and which have served as a meeting point for generations in society. Tradition is important, but a tradition that is constantly interrogated. It is not a position that many in a polarised India are willing to accept.