On Bakrid, Muslims in Ayodhya Perform 'Qurbani’ Without Fear

While the slaughter and distribution of meat is banned in Ayodhya, during Bakrid, the local administration unofficially lifts the ban for the Muslims to perform the qurbani ritual. 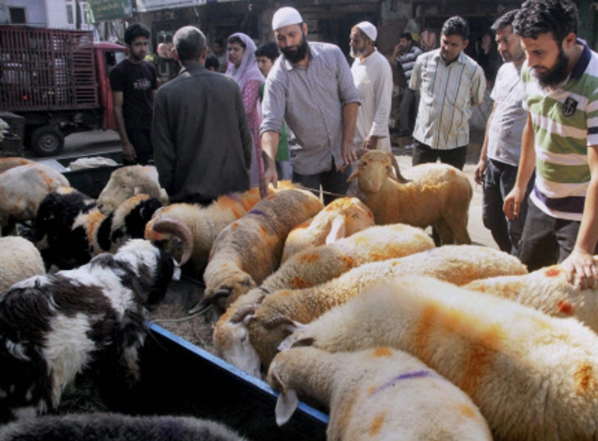 Ayodhya: Amid the meat ban controversy across the country, the temple town of Ayodhya was the best example of religious tolerance and respect for sentiments of the Muslim community this Bakrid.

In this holy town, also known as ‘Ram Nagri’ (City of lord Rama), the slaughter and distribution of meat has been banned by law. Even cooked meat cannot be served publicly, but during the three days of Id-ul-Zuha, no Hindu religious leader or mahant has ever objected to the qurbani ritual being carried out by the Muslim population in the city.

In Ayodhya, meat – of any kind, cooked or raw – is neither sold nor served even in weddings and parties. However, once a year, the local administration unofficially lifts the ban for the Muslim festival of Bakrid. This year too, the ban has been lifted, though there was no official order.

“Everything happens with a great understanding between the two communities,” said Mahant Raghuvar Sharan, a priest of Rasik Niwas temple. “Amid all the controversies over meat and beef, the temple town presents the best example of religious tolerance and respect to religious sentiments of the other community.”

“In fact, this system was so spontaneous that nobody had even noticed it earlier. But now, in the era of religious intolerance when people are being attacked and killed over food habit, Ayodhya leads by example,” said Jamal Akhtar, a local resident.

Speaking to The Wire, Haji Asad Ahmad, a former corporator of Ayodhya municipal board, said, “We have been observing qurbani in Ayodhya for a long time. Those Muslim families who want to offer qurbani on Bakrid do it without fear of anyone. We regularly offer qurbani in our houses in Ayodhya on every Bakrid, as we did this year also.”

Ashok Kumar, resident magistrate of Ayodhya, said: “We have advised the local Muslims to observe the Bakrid festival without fear, and traditional rituals of qurbani in the premises of their houses were allowed, the festival passed off peacefully under the atmosphere of harmony and brotherhood.”

Mahant Yugal Kishore Sharan Shastry, a priest of Saryu Kunj temple, adjacent to Babri Masjid premises, said, “Qurbani is the most important ritual of Bakrid, if our Muslim brothers are observing it within the premises of their houses then why any body should object over it, instead I support qurbani ritual that is being carried out in Ayodhya by Muslims, this shows our honest tolerance for the religious sentiments of Muslim community”

Surya Kant Pandey, a social worker in Ayodhya, reacting over qurbani in the temple town, said, “We are vegetarian and have never eaten meat, but we visit Muslim families in Ayodhya on Bakrid to greet them, we have no objection over qurbani that they are doing in Ayodhya in their houses.”