In Ayodhya, the Ramleela Tradition Is Losing Its Mass Appeal

Organising Durga Pujas has become more popular because there is less financial investment involved, people in the city say. 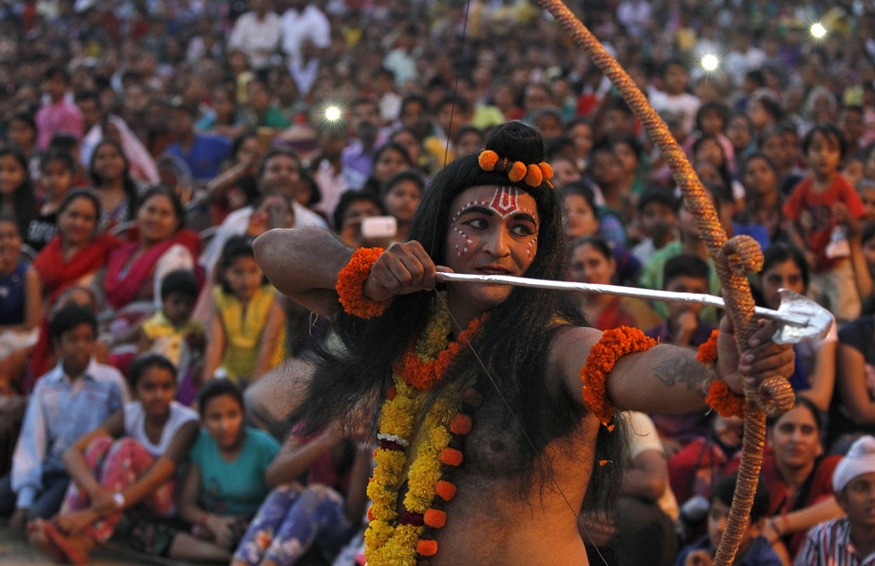 Ayodhya: In the temple town of Ayodhya, the Ramleela is gradually losing its appeal. You can no longer see them being staged in every nook and corner of the city; performances are now confined to one or two places.

The increasing influence of the Durga Puja festival has played a prominent role in distracting people from this tradition of enacting the story of Ram, say old timers in the city.

“We saw the last golden years of the Ramleela till 1990 or 1991, after that Durga Pujas invaded the town,” said Anirudh Narain Jaiswal, who used to play Hanuman in Ramleelas across the city. His troupe separated in 1991.

Ramchandra Tiwari, the former owner of a local theatre that staged Ramleelas for several years, has an interesting observation. “The popularity of Durga Puja increased as the Ram temple movement gained strength,” he said. And the reason behind it, added Tiwari, was simple economics. “Durga Pujas bring more money to organisers than the traditional Ramleelas.”

“Putting up a stage, paying wages to the Ramleela artists who start rehearsals a few months before Dusshera, managing their costumes – it requires a lot of money,” Tiwari explained. “Add to this the expenditure on effigies, each of which cost not less than Rs 1.5 lakh, and you get an idea of the money required for a Ramleela.”

Durga Puja pandals, on the other hand, are not very expensive. “You don’t have to pay any artists, buy costumes, make effigies or arrange other paraphernalia,” said Tiwari.

This makes Durga Pujas economically viable. “While Ramleela organisers were always worried about raising money even to meet their expenditure, Durga Puja organisers end up with profits.”

With the Ramleela and Dusshera celebrations pushed to a corner, old timers feel they are losing a centuries-old tradition. It has also led to the eclipse of certain crafts. For instance, Ram Murat Agrawal used to make effigies of Ravan, Kumbhakarn and Meghnad. “We had been doing this job for generations,” he said, adding that after the rise of Durga Pujas, the family was forced to adopt other businesses.

However, Yugal Kishore Sharan Sahstry, the mahant of the Saryu Kunj temple, disagrees with the view that the Ramleela is losing its appeal. It only needs to be organised on a larger scale and in an attractive manner to draw crowds again, he said.

According to Keshav Bigular, secretary of Central Durga Puja and Ramleela Committee, “This year, we are organising more than 50 Durga Pujas within the holy city with a radius of less than five km. At two places – Rajendra Niwas and Bhagwatacharya Sadan – Ramleelas are being staged.”