Prime Minister Narendra Modi is scheduled to attend the event. 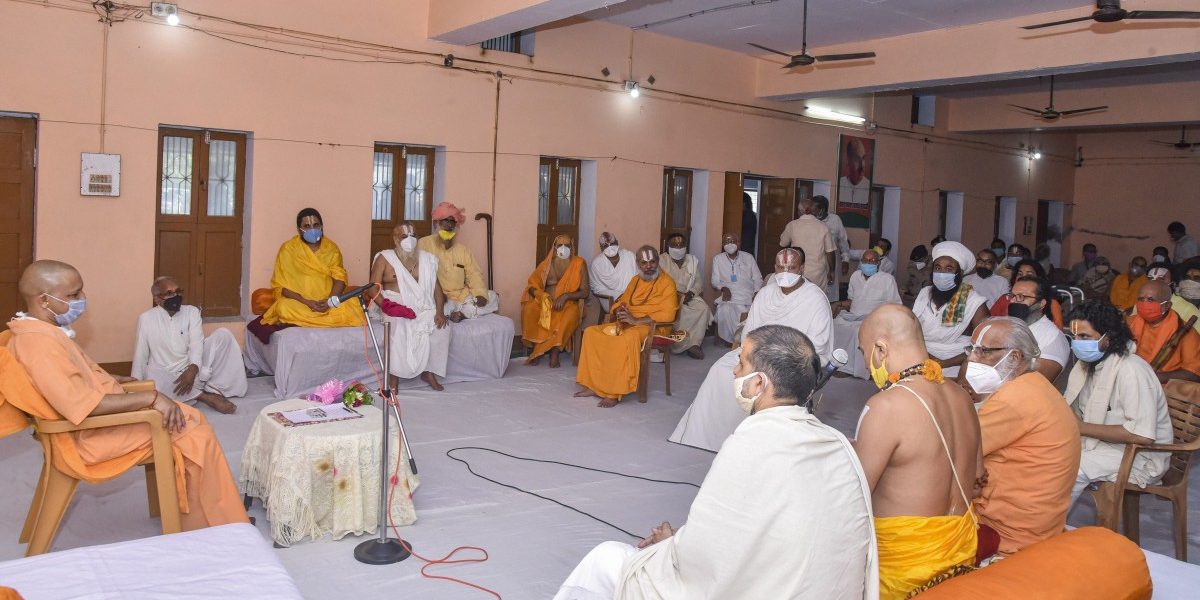 Uttar Pradesh CM Adityanath (left) in a meeting at Karsewak Puram, during his visit to Ayodhya, on July 25, 2020. Photo: PTI

New Delhi: The foundation laying ceremony for the Ram temple at Ayodhya will be telecast live on state-owned public service broadcaster Doordarshan.

Prime Minister Narendra Modi is scheduled to attend the much-publicised event, on August 5. The construction of the Ram temple had been a poll promise for Modi and the Bharatiya Janata Party.

Indian Express quoted unnamed sources in Prasar Bharati as having said that “the event will be covered like any other event of the prime minister.”

Last year, the public broadcasting agency had initiated disciplinary proceedings against an assistant director of programme in Chennai, R. Vasumathi, for allegedly failing to telecast a speech delivered at the Singapore-India Hackathon 2019 by Modi live on DD Podhigai.

The Shri Ram Janmbhoomi Teerth Kshetra, the trust overseeing the project since the Supreme Court order last year paved the way for the construction of the temple, tweeted that the ceremony will be shown live on several other channels too.

We appeal to all pujya Sant-Mahatma and Shri Ram bhakts across the globe to do Samuhik Pujan & Bhajan-Kirtan with their family, friends & the society, between 11:30 AM to 12:30 PM.

While it dissuaded people from attempting to visit Ayodhya given the health crisis, the trust also called for arrangements to be made for viewing the ceremony on screens in gatherings.

All possible precautions to check the spread of Corona must be strictly followed. Coming to Ayodhya in present circumstances can cause huge inconvenience, hence everyone is requested to stay where they are & celebrate this grand occasion of historic importance.

Uttar Pradesh chief minister Adityanath on Saturday visited Ayodhya and placed the idols of Laxman, Bharat and Shatrughan at the temple site.

After attending ceremonies and inspecting the site, Adityanath held a meeting with seers and members of the Ram Mandir Trust at the Vishwa Hindu Parishad headquarters at Karsewak Puram.

On July 24, dismissing a public interest litigation filed by Mumbai-based activist Saket Gokhale on the August 5 ceremony for the Ram temple, the Allahabad high court on Thursday said it expects the Uttar Pradesh government to ensure that all necessary measures against the spread of COVID-19 are taken during the event.

Pointing out that the presence of such a large number of people at a venue could lead to the violation of protocols of physical distancing prescribed by the government of India and the Uttar Pradesh government to curb the spread of COVID-19, Gokhale had sought a stay on the event.

The bench, however, held that the concerns were only unfounded assumptions and dismissed the petition.