While the effort is being portrayed as a positive one, the Bhopal jail is one where Muslims inmates, according to the NHRC, have often been treated with brutality. 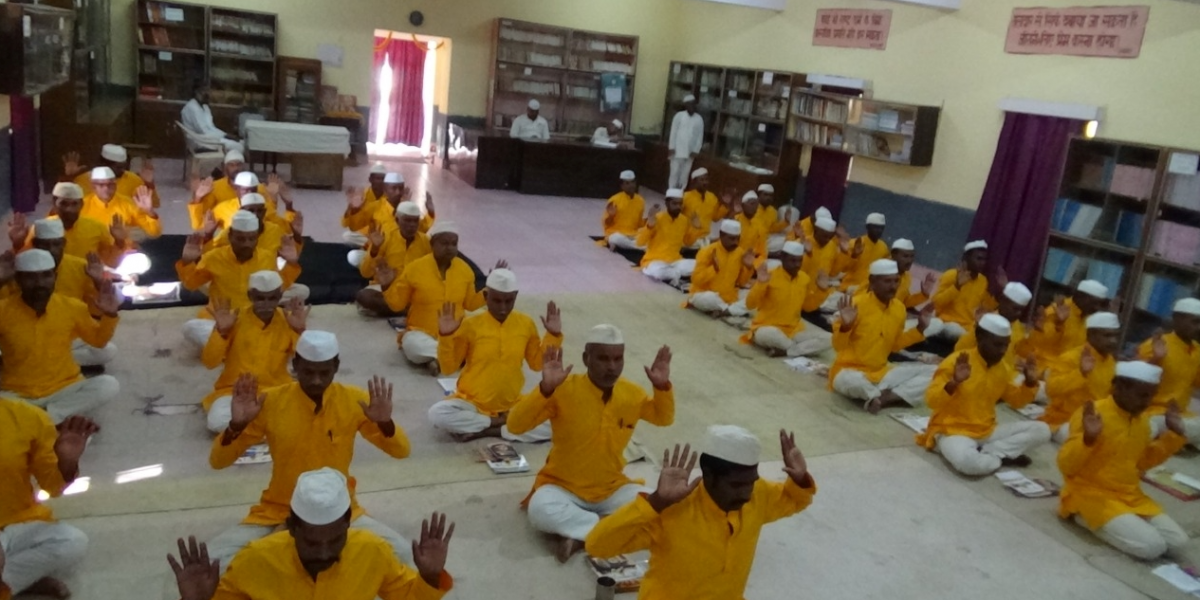 The 'Yug Purohit' or priest training course being offered to criminals convicted of serious crimes like murder, rape and dacoity, at the Bhopal Central Jail. Photo: Kashif Kakvi

Bhopal: More than 50 jail inmates lodged at the Bhopal Central Jail, who are convicted of serious crimes such as murder, rape, dacoity and kidnapping, have become priests, thanks to the Gayatri Shakti Peeth’s month-long priest training course. The effort, however, is not without its complications – activists allege that it masks the mistreatment of other inmates and ignores other social intricacies.

The Rashtriya Swayamsevak Sangh-backed Gayatri Shakti Peeth is a sister organisation of Gayatri Pariwar which claims to work “towards spreading awareness on Hinduism.”

In March, more than 50 inmates were offered the ‘Yug Purohit’ or priest training course. The jail administration and Gayatri Shakti Peeth shortlisted them from a list of over 150 convicted inmates, most serving life terms.

The second batch is likely to kick start from June 1 to June 30, jail officials said.

For the priest training course, the inmates were given eight to 10 religious books with mantras. They were taught three subjects – Karmkand, Sangeet and Boudhik – between 1 pm and 4 pm by eight teachers.

In Karmkand, they were taught various ways of performing puja for occasions such as death, birth, marriage, festivals, grahpravesh (house warming) and others as per Hindu rituals. In the Sangeet class, they were taught the use of traditional instruments like dafli, ganti and others, including tone and tenor of singing bhajans (devotional songs) and how to properly recite mantras. In Baudhik, they were taught the ways of living in society, what Hinduism is, how to control anger and achieve the path of happiness with the help of religion, the inmates told The Wire.

Speaking to The Wire, Sadanand Amrekar, one of the priests and also a member of Gayatri Shakti Peeth, said, “The priest training has been conducted with the aim of establishing oneself as a good person in the society and the meaning of purohit/pandit (priest) is taking care of others. There are 50 prisoners as of now, whom we have trained. They can earn by working as a pandit after the release or can do it for free.”

He added, “We are training these prisoners as they are cloistered from society. They are being taught the rituals so that they can work for the well-being of the people and religion.” 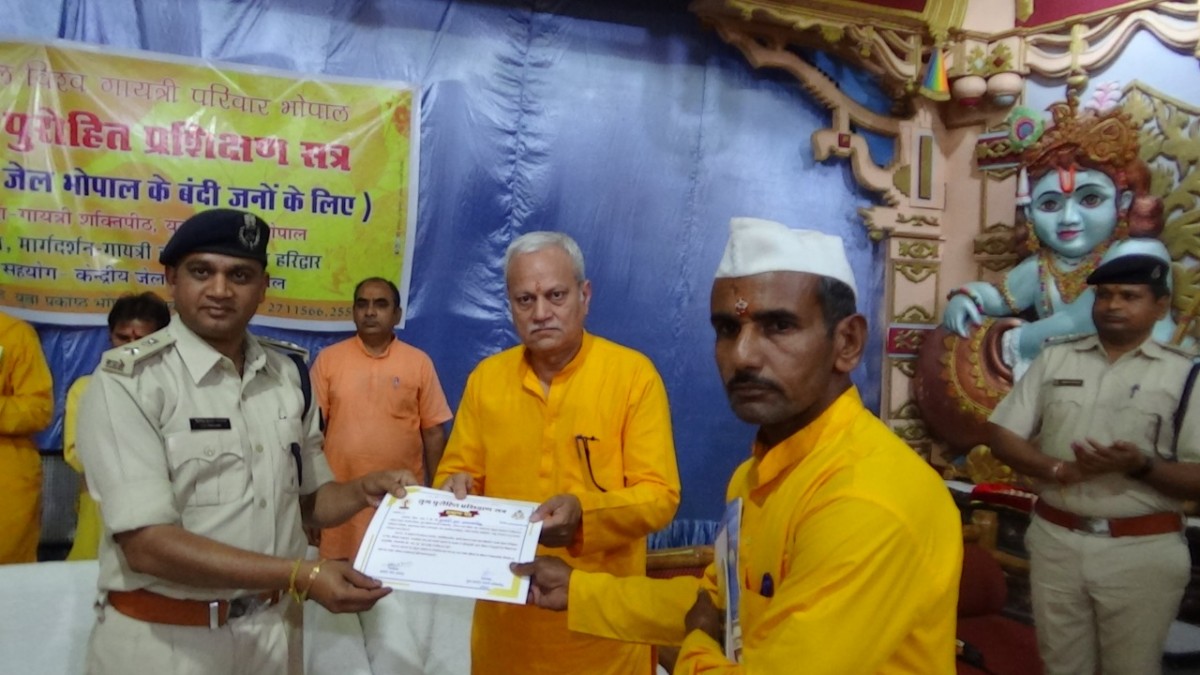 One of the newly trained priests Balram Singh, (25), who belongs to the tribal community, is lodged in Bhopal Central Jail on charges of dacoity since 2019. A resident of Madhya Pradesh’s Mau, Balram has been awarded 10 years of imprisonment for his crimes.

“I have only heard about the major festivals like Holi, Diwali, Raksha Bandhan and a few Hindu deities. Being a tribal, I grew up hearing stories of tribal icons, deities Kuldev and Badadev, nothing more,” he told The Wire.

After the ‘Yug Purohit’ course, he said his life has “changed”. He said he now wakes up at early, recites Gayatri mantra and the Hanuman Chalisa after yoga and performs puja at the jail’s temples.

According to Gayatri Shakti Peeth programme coordinator, Ramesh Nagar, five to six temples were built inside all four blocks of the central jail in the last two years with the help of jail authorities and the newly trained priest will be appointed there.

“Prisoners in jails are either in depression or in aggression. Most of them are illiterate and belong to marginalised classes. We felt the need to train prisoners so that they feel the positive energy around them. Over 50 prisoners who were willing to learn are being trained and more [training sessions] will come up,” Dinesh Nargave, superintendent of Bhopal Central Jail, said.

Apart from the training sessions, the jail authorities also organised religious and cultural events for the inmates. “During the COVID-19 lockdown alone, the inmates filled over 24,000 books with the Gayatri Mantra. And it happened in over two dozen jails of the state. Precisely, in just nine months of the first lockdown, Gayatri Mantra was written 13.2 million times by the inmates,” he added.

Another inmate Vikas Kuchwadiya (29), who belongs to the Dalit community from Madhya Pradesh’s Babai of Narmadapuram district, had also enrolled himself in the programme, hoping for peace and a speedy release. He was convicted in a 2018 murder case and was awarded life imprisonment. He says he has found peace and “turned vegetarian” after completing the course.

“We are being taught to propagate virtues of love and camaraderie along with spiritual education rituals, which I was unexposed to. Now, there’s a sense of calmness and I do feel like a part of the society,” he told The Wire.

“We also counsel or motivate inmates to make best use of their lives in the light of religion,” said Raghunath Prasad Hazarik, one of the mentors, and a member of Gayatri Pariwar, the parent organisation of Gayatri Shakti Peeth.

Purshottam Tiwari and Vishnuprasad Mishra, who are from ‘upper’ caste Brahmin families, were awarded life imprisonment for murder. Mishra, a resident of Raisen district of Madhya Pradesh, said, “Whatever we were taught in the priest training programme, we are already well-versed in it. We hardly made any effort to remember mantras and customs. The only thing the course has done for us is that it has refreshed our faith in Hindu religion.”

However, for inmates like Balram and Kamaltel Singh, who belong to the Dalit community, it wasn’t an easy task to become a priest. Added to that, their path as a priest won’t be as easy after their release from the prison.

Vikas Kuchwadiya, another Dalit inmate, said, “I don’t know how society will react [to Dalits becoming priests]. If I fail, I will go to Haridwar to serve the patrons of Gayatri Pariwar.”

Ramesh Nagar, programme coordinator of Gayatri Shakti Peeth, claimed that ‘keeping a religious zeal alive in them can turn these criminals convicted of serious crimes away from the crime, and they can live a peaceful life’. That’s why new Hanuman, Shiva and Gayatri temples were built inside the jail.

“We are in touch with the senior officials of the jail department and planning to implement this model across the state,” he added.

Bhopal Central Jail was in the news in October 2016 when eight students associated with the banned Student Islamic Movement of India (SIMI) were killed in an encounter by the Bhopal police.

Even, the National Human Rights Commission (NHRC) in its report submitted in March 2018 pointed out that SIMI operatives were being tortured physically and mentally in the jail.

Madhuri Krishnaswamy, a human rights activist, pointed out, “On one hand, temples are being built inside jail, and criminals convicted of serious crimes are being given religious education. On the other hand, the jail authorities have harassed SIMI undertrials for practising their religion, and denied them basic rights, forcing them to sit on a hunger strike. They have been singled out and cornered. Does the jail manual ask the authorities to discriminate against inmates on religious grounds?”

Kashif Kakvi is a journalist with NewsClick.