Ahmedabad: Space Becomes an Issue for Those Who Bury Their Dead as COVID-19 Rages

Given the extraordinary circumstances, Christians and Parsis have begun to cremate some of their dead. 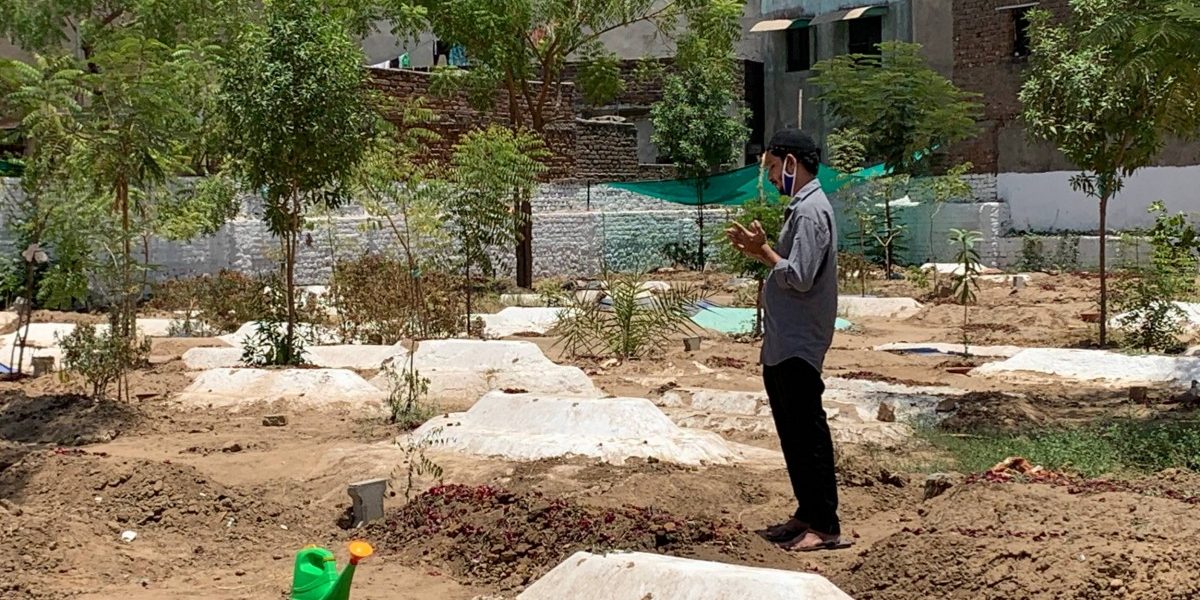 Ahmedabad: Junaid Shaikh’s mother, Faridabanu, died earlier this week. After a long wait, the 65 year old had been allotted a bed at the Ahmedabad Civil Hospital. But within 48 hours, Junaid got a call from the hospital that she died at night. They collected the body after a wait of 8-10 hours, but it was another six hours before they could bury her at the kabrastan (graveyard) in Juhapura.

Two small graveyards in Juhapura, a Muslim-dominated area in Ahmedabad, are facing severe space constrictions. Moreover, there aren’t enough people to dig graves, which in the last week has resulted in a waiting time of up to six hours, at times, for a burial. The manager of both graveyards in Juhapura, Anees Desai, said labourers and now even volunteers join in to dig graves till 3 am. Still there is a wait. “Yesterday we buried 22 people in a day, till late into the night,” he said.

Looking around the Namara Chhota Kabrastan, a private piece of land that was donated by an individual last year during the first wave of COVID-19, he said, “Last year, we got a JCB in to dig up the land. Those graves went in as deep as 10 feet. Even though a grave space cannot be recycled before 2.5 years, we have started burying fresh bodies on top of these graves at six feet.” And this is the story of just two graveyards in Ahmedabad. The city has 18 small and big Sunni Muslim graveyards. Young Junaid is grateful his mother found a space in this graveyard close to his home, but he realises in the current scenario, her grave may no longer be there next summer. So he intends to visit her as much as he can till then.

Every inch of space is dug up, even the walking areas. This reporter found multiple burials happening at the same time in one graveyard, alongside a three-day old kabar whose sand had sunk in, exposing the coffin. In another graveyard, ten workers were continuously digging under the blazing sun, and one could see some 15-odd open graves. “We are digging them in advance to reduce waiting time,” Desai said, while he answered three phone calls of families requesting burials. His office said they had issued eight burial confirmation letters between morning and noon that day. “We have a long day ahead. At least 25% of people don’t even collect death certificates. When they realise the need for it, they do it 2-3 years later,” said the granite trader-turned-builder who also dabbles in politics.

Facing a similar shortage of space, the Catholic community announced last month that if the family of COVID-19 victims would like to cremate their dead, it would not be a violation of the Catholic Canon Law. In the last two months, the community has created ‘niches’ in a section of the graveyard – a concrete box in a wall – where ashes of COVID-19 victims are preserved by the family. Over 12 people, including two Jesuit priests, have been cremated in the last fortnight. 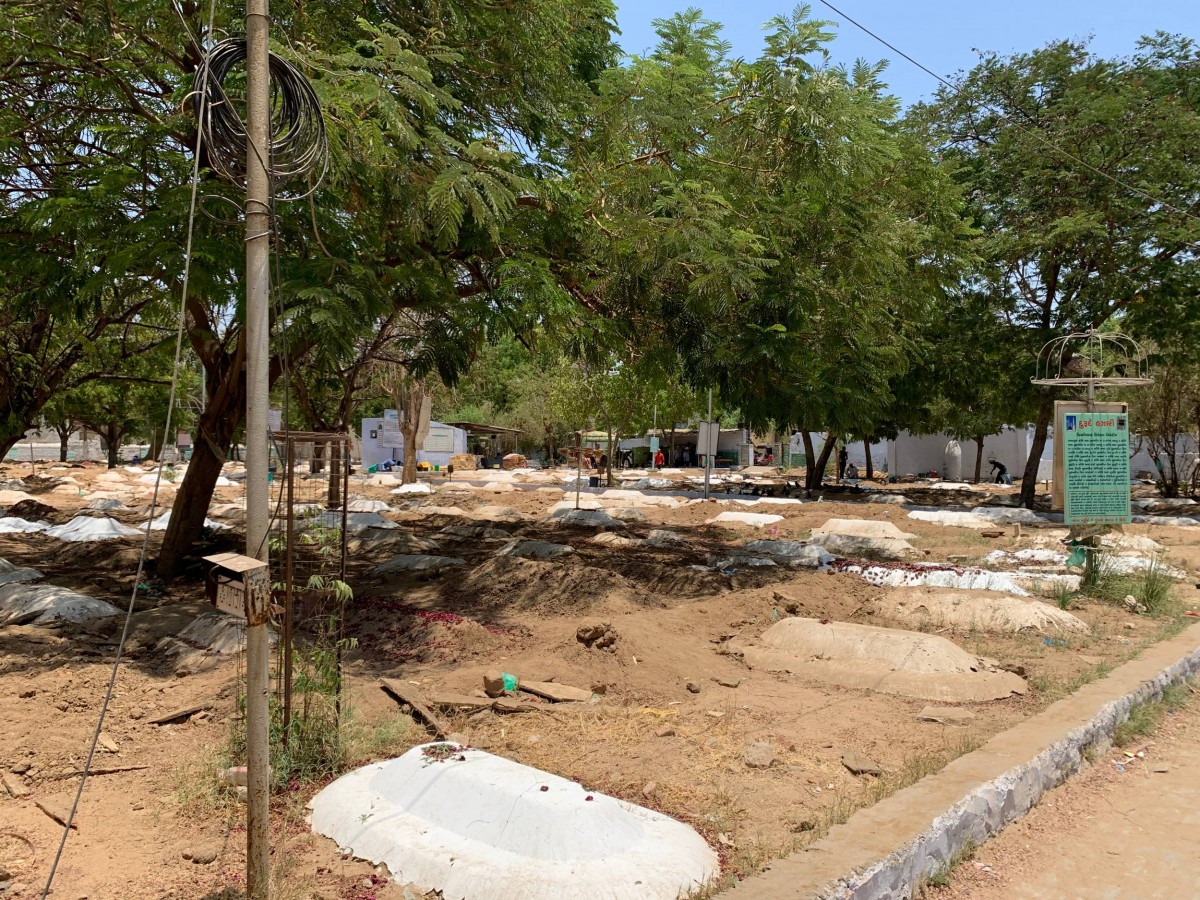 Meanwhile, the Parsi community has given similar directions – that COVID-19 victims’ families may be excused from the traditional ‘Dokhmaneshin’ in keeping with the government guidelines, and instead cremate the dead.

Muslims, however, have not yet considered cremation for COVID-19 victims. In fact, a COVID-19 victim’s burial takes 10 feet space, more than a non-COVID-19 burial space of six feet, leading to a further real estate crunch. A recently elected corporator, Zubair Pathan of AIMIM from Juhapura, wrote a letter to the Ahmedabad Municipal Corporation (AMC) on April 27, 2021 urgently seeking government land to be used as a burial site.

“Earlier we used to get 13-15 bodies in a month. Today we are getting this number in a day. People are digging 15 hours daily. Labourers have returned to their villages, so we have to mobilise local volunteers for digging. Sometimes we encounter live ants and not fully-decomposed limbs. There’s space for only 150 more bodies, which we anticipate will fill up in 10 days,” said Pathan, a lawyer who is grappling with this unprecedented crisis in his very first month as a politician.

For a population of about six lakh, Juhapura has two burial sites with a capacity of about 500 each. Both these parcels of land have been donated by private individuals. “Juhapura was planned for gradual development to relocate flood victims from the Sabarmati riverbank. But after 2002, the area suddenly burst into a massive Muslim ghetto and expanded haphazardly. Along with most other civic amenities, land for a kabrastan was accounted for. For a population like Juhapura, a ‘bada kabrastan’ (large graveyard) the size of 30,000 graves is required,” said Rizwan Kadri, president of the Ahmedabad Muslim Waqf Committee.

The total population of Muslims in the city of Ahmedabad is estimated to be 25 lakh, dominated by Sunnis. Much of this is also a floating population of migrant labourers. The city has 18 Sunni Muslim graveyards, three of them big, with a capacity of over 15,000 graves. The rest are medium and small, of varying capacities. “The big graveyards were built on land given by Muslim rulers centuries ago. Since then, most graveyards are on privately donated land. Till now we could manage. But now there is a sudden crisis,” Shamshad Pathan, Ahmedabad city president of AIMIM, said.

However, the number of deaths being recorded among Muslims in urban areas of Gujarat this year is less than last year. In May 2020, the biggest graveyard in Ahmedabad – Musa Suhag – registered 337 burials; in April this year, 194 were reported. Kadri gives a categorical explanation for this phenomenon. “Last year, there was immense fear of taking treatment for COVID-19 and because of the hype, for any other ailment. Several more deaths were registered simply because people refused to take treatment. Also due to the Nizamuddin Markaz incident, several non-COVID-19, asymptomatic people were forcefully sent to the Samras isolation facility. And all this was happening while the Citizenship (Amendment) Act protests were on. The atmosphere of distrust and fear resulted in a bigger disaster,” the Waqf Committee member said with a sigh.

Skepticism still runs deep as vaccination centres in Muslim areas remained empty over the last three months. “Even now, people call me for help only after their oxygen saturation dips below 90 and then they ask for a cylinder. Shocked, I say hospitalisation is needed; they refuse. The irrational fear that an injection will kill them or render them infertile continues. Our biggest challenge as community leaders now is to convince people to take vaccines,” said Zubair Pathan, who recently lost his mother to COVID-19. Besides, he added, the peak of the pandemic coincided with Ramzan in both years. So there is apprehension that ‘unnecessary’ hospitalisation will interfere with fasting.

The Catholic community is facing a different set of challenges. Although the leaders have announced permission for cremation if the family desires, a section of the community is protesting. “We have been seeking more land from the government for our burial sites. An orthodox section feels that this announcement will give the authorities a handle to refuse on the grounds that we have an alternative, and eventually everyone will be forced to cremate,” spokesperson of the Catholic Church, Gujarat state, Father Vinayak Jadav said.

In the last fortnight, since the Bishop Athanasius Rethna Swamy’s April 12, 2021 letter, two Jesuit priests have been cremated and their ashes preserved in a niche at the Biladibagh graveyard.

The total estimated Christian population in Ahmedabad is 80,000, of which 40,000 are Catholics and the rest are from multiple Protestant communities. In Ahmedabad city, the Catholics and the rest have different graveyards, while in rural areas, they are shared properties. Three Catholic graveyards in Ahmedabad with a capacity between 300 and 500 each are nearing their capacity. Father Jadav said they had a situation last week when an orthodox family wanted to bury a COVID-19 victim and there was no space anywhere. “We had to place a special request and many exceptions had to be made,” Father Jadav said.

“Niches in the wall are a common practice in the west, but in Gujarat we introduced it only earlier this year looking at the COVID-19 situation. A family can buy a niche and preserve mortal remains of multiple family members. It is a common grieving place for the family, while being practical, eco-friendly and without violating the Church law,” he added.

Meanwhile, the Parsis are also facing some resistance from the orthodox section. In line with the national diktat of cremating COVID-19 victims, the community in Gujarat has been following that practice since last year. However, a family in Surat recently challenged the community leaders’ refusal to allow the traditional Dokhmaneshim for his father. A reliable source requesting anonymity said the issue blew up. Though it is now being amicably sorted out by community leaders, more such instances are feared.

Ervad Dr Khushroo Ghadiali from the Anjuman Vakil Addran in Ahmedabad said Dokhmaneshim as the rite of passage is a very sensitive subject for traditional Parsis. “Keeping with the times, the community has strictly adhered to government guidelines. It is painful of course, but we must do what is practical in these extraordinary times. Our population is already so little world over, every death worries me,” he said.