CM Zoramthanga has written Amit Shah a letter noting this is the first time the post is being held by someone “without knowledge of a working standard Mizo language”. 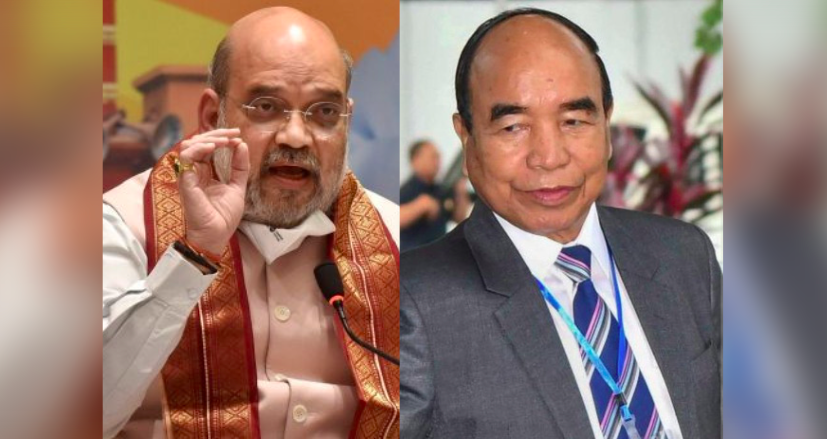 New Delhi: The Ministry of Home Affairs has appointed a new chief secretary in Mizoram overlooking chief minister Pu Zoramthanga’s concerns over the post – for the first time in the northeastern border state – being held by someone “without knowledge of a working standard Mizo language”.

According to sources in the Chief Minister’s Office, the tussle between the MHA and the CMO over the appointment ensued after New Delhi decided to name Renu Sharma the new chief secretary of Mizoram on October 28.

The MHA overruled Zormathanga’s choice of elevating the additional chief secretary J.C. Ramthanga, a Mizo and an IAS officer of the Manipur cadre, in the wake of the retirement of the incumbent Lalunmawia Chuago, who belonged to the Gujarat cadre.

On being informed about the decision by MHA, the chief minister shot off a lengthy letter to Union home minister Amit Shah on October 29, a copy of which has been circulating on social media. In the letter, Zoramthanga formally informed Shah about his choice, justifying reasons for it, and stated why Sharma is unsuitable to the position.

“The Mizo people by and large generally do not understand Hindi, and none of my cabinet ministers understands Hindi, some of them even have problem with English language. With such background, a chief secretary without knowledge of a working standard Mizo language will never be an effective and efficient chief secretary,” Zoramthanga wrote to Shah.

In the letter, the chief minister particularly highlighted the fact that “the government of India [has] never posted a chief secretary who does not know the working standard of Mizo language since the creation of the state of Mizoram.”

“Whether it is the UPA government or the NDA government at the Centre, this has been a practice since the creation of Mizoram state. It is a well known fact that in other states of India, a chief secretary, who does not know even the basic working language of the respective state is never posted at all.”

However, the MHA went ahead with its decision, directing Sharma to join as new chief secretary in the state capital of Aizawl on November 1. Sharma had, until that date, served as the additional chief secretary (transport) in the Delhi government.

Sharma’s inability to communicate in the local language might have been known to the state government as the Arunachal Pradesh-Goa-Mizoram and Union Territory cadre officer of the 1988 batch had served in Mizoram roughly for a year as commissioner and secretary in the finance department in 2011-12. She had also had a stint in the state in 2016 in the home and personnel and administrative reforms departments.

An East Mojo report, quoting ‘official sources’, had said, “The soft-spoken and affable officer had cordial relations with the Mizos during her previous stint.” It also said, “During the COVID-19 pandemic, she was suspended by the Ministry of Home Affairs for breaking the rules of lockdown in Delhi.”

Unlike other northeastern states, Mizoram and Arunachal Pradesh do not have their own cadre of IAS and IPS officers. The assemblies of both states passed a resolution in 2017 to urge the Narendra Modi government to remove them from the AGMUT cadre and form separate cadres for the respective states. One other state that had also made a similar request to the Union government was Goa. Nothing has come of those pleas to the Modi government.

Interestingly, Zoramthanga’s letter, aside from citing a longstanding practice followed by the Union government, in choosing a chief secretary for Mizoram, also reminded Shah, a top BJP leader, to support his decision as “a special favour”. Otherwise, Zoramthanga wrote, the opposition would “make a mockery” of him “for faithfully serving the partnership of NDA.”

“I have been an NDA partner from the beginning up to this time. While many of the states are changing themselves from one alliance group to another, I am the only one in the whole of the North East states, who have been a faithful partner of NDA team from the beginning up to this time. I, therefore, believe, that I deserve a special favour and consideration for the faithful friendship with NDA,” he wrote.

Reminding Shah that even his predecessor, the Congress chief minister Pu Lalthanhowla was allowed by the Modi government to have a say in picking a chief secretary, Zoramthanga said, “If it is denied to me, the Congress party and all other opposition parties will make a mockery of me for faithfully serving the partnership of NDA”.

In the 2018 assembly polls, although MNF was a part of the BJP’s Northeast Democratic Alliance (NEDA), it chose not to honour the BJP’s desperate plea to Zoramthanga to contest the elections with a pre-poll alliance. Piggybacking on the MNF in a state with high anti-incumbency against the two-term Congress government was the only way BJP could electorally benefit in the state.

MNF, sensing the pulse of the electorate in the Christian majority state, had decided not to take BJP along. After the elections, the BJP could enter the Mizoram assembly with the help of a defector from the Congress, Budha Dhan Chakma, who belongs to the Chakma community among whom the BJP enjoys some amount of popularity. Budha Dhan is BJP’s first MLA in the Mizoram assembly.