The Unbearable Burden of Being Zakir Naik

In defending Islam against critics, the preacher's facile, tactless and naive claims about its superiority violated basic norms of tolerance. Whether that amounts to instigation of terrorism against others or is enough to condemn him is another matter. 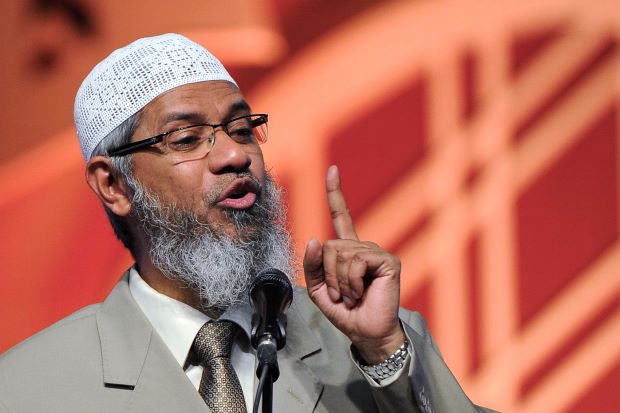 After an intensive scanning of Zakir Naik’s sermons, the security agencies have determined that his sermons, broadcast on Peace TV, were actually guilty of fomenting sedition and terrorism. One of the JMB terrorists who attacked Holey Artisan Bakery in Dhaka apparently carried an excerpt from one of Naik’s sermons in his pocket, which the police found after gunning him down.

Even before this incident, Naik’s sermons had attracted the attention of Bangladesh’s anti-terrorist agencies because of their phenomenal popularity among Muslim youths, but Naik could not be pinned down on the basis of any remark made by him. But this time, following the uproar after the Bangladesh attack, the agencies could build a case to prove that his sermons and catechisms were inspiring Islamist terrorist activities.

It has now been alleged that the previous Congress government turned a blind eye to the dangerous tenor of Naik’s sermons thanks to a hefty consideration. Hence his long lasting impunity. Now, Naik has written an open letter from Dubai, challenging the government to produce hard evidence of his complicity in terror activities through his intellectual inputs. The matter does appear to be somewhat intriguing.

Some time back, an article by Shireen Azam in the Economic and Political Weekly demonstrated how Naik was using the analytical tools characteristic of Western modernity to refute popular Western notions of the ‘irrationality’ or ‘inhumanity’ of certain Islamic beliefs and practices – polygamy, for instance. It was as though he had turned the tables on Western critics by using the very methods they used in their habitual discourses, like scientific objectivity and rational calculation of the benefit and harm, from practicing any such belief or practice.

A friend who was a moderate supporter of Hindutva lent me a copy of Swami Dayanand Saraswati’s Satyarth Prakash a few years ago. This particular edition supplied English translations of Saraswati’s Hindi commentary. In retrospect, it appears to me that that was precisely what the Swamiji did in his interpretation of the Vedas. Of course, he dismissed the stuff that he found objectionable (in the sense of being irrational or superstitious) as interpolations. Otherwise his endeavour was to show how rational, logical and ‘scientific’ the teachings of the Vedas were. According to him, the Vedas embodied the truth and that could be rationally established. Saraswati is separated from Naik by a gap of over a hundred years, but the mindset does appear similar. It set me thinking about what might have been at the root of their identical approach to facing the challenge of modernity.  I think it can be found in the socio-cultural context.

The colonial occupiers of India, which for a long period preferred to use the services of Hindus in both commercial and administrative fields, had not only impressed Hindus with the achievements of Western science and industry, but also deliberately inculcated among them a deep sense of inferiority about their own culture. Though there was also a strand of admiration for the speculative profundity and artistic gifts of ancient Indians among a section of Western scholars, it was not enough to dispel the gloom of Hindu minds that had been exposed to hegemonic Western culture. For the sake of sheer self-respect, it was a matter of vital importance for many educated Hindus to assert the validity and excellence of their Hindu heritage on terms that the West would recognise. One finds the stirrings of such an affirmation in Vivekananda’s writing when he proclaims the transcendent value of Hindu spirituality. Saraswati, founder of Arya Samaj, felt the same urge.

On the other hand it was not until the time of Sir Syed Ahmad Khan that the Muslim middle-class in India turned to the British rulers for patronage and promotion of their worldly interests. Through upbringing and a result of the tireless indoctrination by the Muslim clergy, they imbibed an unwavering faith in the infallibility of the Quran and the way of life propagated by the Prophet. Additionally, only a small minority among the Muslim community was exposed to the hegemonic influence of Western science and industry. The vast majority of Muslims could blithely ignore the challenge of the West even under conditions of political subjugation.

This was the condition not only in India but also the entire Muslim world. Even political and economic subordination could not disarm the community’s confidence. Muslim resistance to British rule did not bear the yoke of a sense of inferiority. But this confidence suffered a grave crisis after the fall of anti-colonial regimes in Levant and the Middle East that had attempted to resist imperialism.

False start for an Islamic revival

However, there was a resurgence of Muslim self-confidence during and after the Holy War in Afghanistan. And, as noted by various observers, later on there was a recoil from the embrace of Western friendship, when Muslim people discovered that their Western friends did not share their millennial goals and actively sought to co-opt the believers in a new imperial order dominated by the West. This clash of aims, drummed up at this juncture by some Western scholars as ‘the clash of civilisations’, led to the cataclysmic decimation of the World Trade Centre in the heart of New York.

Initially, among batches of Muslim youths that were newly exposed to modern education, 9/11 figured as the triumphant return of Islam to the centre-stage of world history. But the subsequent chorus of denunciation and condemnation from the world raised irrepressible doubts and put them on the defensive. As al-Qaida’s tactics revealed themselves through gory massacres and bomb-blasts, Islamic revival itself became a questionable concept. The sanctity of Islam itself seemed to pass under a cloud. The inevitable clash between the passionate faith of Islam and the liberal rationalism of the West shook many Muslim youths to their roots. They could neither abandon their deeply imbibed faith nor ignore the apparently irresistible march of Western rationalism and science. The accusing finger that seemed insistently to arraign Islam for alleged perversities could not be wished away. It was precisely at this juncture that the erudition and logical acumen on display in Naik’s sermons seemed to come to their rescue. They not only restored the shaken self-respect of many a Muslim youth, but also appeared to go even further by establishing the indubitable superiority of Islam as a religion.

A section of the youth, enthralled by such a revelation, may well feel inspired to go further and join a jihad against all non-believers to re-establish the caliphate – the state based on the bed-rock of the only true religion in their eyes. Naik, the logic-chopping cleric, probably did not imagine such a consequence. But there is some evidence that in defending Islam against its critics Naik had also stated that Islam scored against all other faiths in terms of rationality and verifiable claims. This bluntness, under the circumstances, was somewhat facile and naïve, to say nothing of the fact that it violated basic norms of tolerance. His naivety can hardly serve as a shield against pertinent criticism of his far-reaching and tactless conclusions at this moment in time. Whether that amounts to instigation of terrorist violence against people of other faiths or is enough to condemn him to severe punishment is another matter.