Yadav has called for Delhi voters to exercise their cynicism and right to reject by pressing NOTA. But the prospect of an election turning up 'blank ballots' was visited long ago by the Portuguese Nobel laureate. 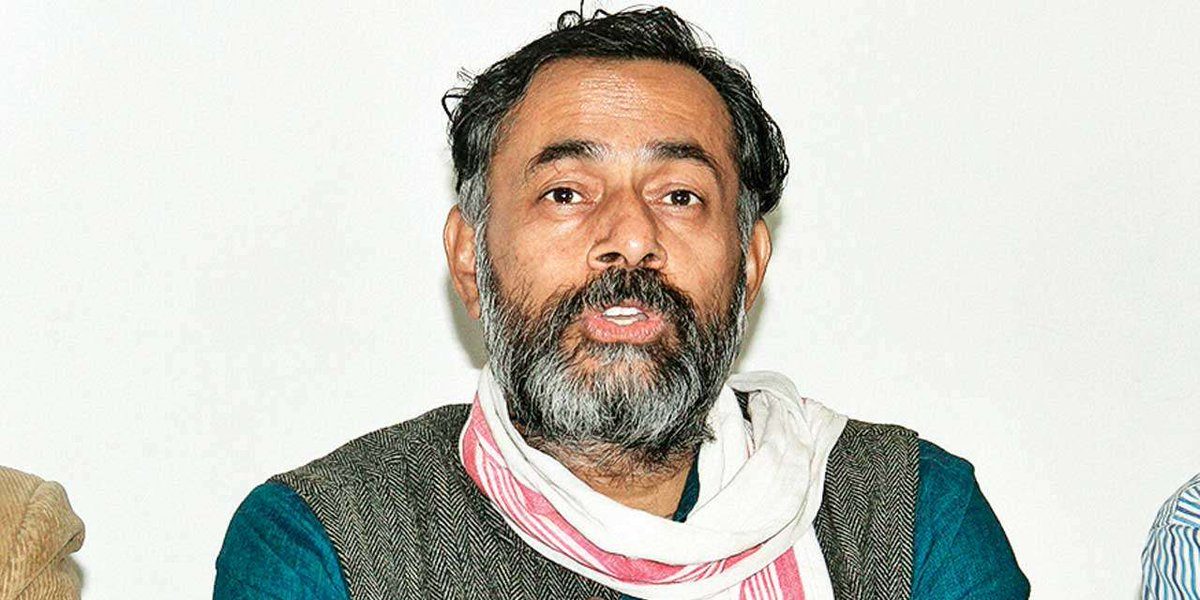 Amidst all the subjects discussed this election season, from the absurd and abhorrent to the subtle and sublime, one wouldn’t know where to fix the kerfuffle that Yogendra Yadav of Swaraj India tried to create over NOTA. This was about a couple of weeks ago, when he advocated its exercise to voters in the National Capital Territory (NCT) region. Some would argue that if one can’t place the fuss created around NOTA, that serves the electoral instrument just fine because that is how it is designed to be. Nowhere.

There have been many unsettled existential questions about NOTA ever since it became a functional button on our EVM machines, in 2013. Some view it is as a cynical and purposeless option, some imagine it as an instrument of dissent or a subversive tactic, and for some, it is plain catharsis.

There is no study or survey, as yet, to suggest if NOTA votes can goad a political party into transforming. One is also not certain if politicians are ashamed, and propelled to a bout of depression, when their victory margins are less than that of the NOTA votes polled in the constituency. There have been a number of such cases in recent elections. There were four such cases in the Karnataka assembly polls of 2018.

In the Madhya Pradesh assembly polls, NOTA played a spoilsport in 10 seats. A year before that, in the Gujarat 2017 polls, NOTA was in fierce competition with victory margins in 12 seats. In Godhra, where the BJP won by 258 votes, NOTA was 3050. Amidst these positions and questions, there is the reformist idea of assigning a value to NOTA, to make it grow some teeth, so it could chew some positive cud.

This philosophical or existential dilemma that exists about NOTA was best captured in three reactions to Yogendra Yadav. The Congress candidate from Sivaganga in Tamil Nadu, Karti Chidambaram wrote on Twitter:

“NOTA is pointless. It is as good as not showing up to vote. It’s like going to a restaurant and asking for the menu and then saying you are fasting.”

“Sorry Yogendra, I and many others are still shocked, even appalled, that you could advocate NOTA anywhere in the country in such a crucial election in which democracy is itself at stake.”

The third reaction is Yadav’s bewildering clarification on his own statement, which actually does not clarify, but intransigently restates his position, leaving the voter confused. He says his call is specific to the NCT region, and his party had decided to do three things: One, defeat the BJP; two, not join an Opposition coalition (Mahagathbandan); three, to identify and support alternate forces. He further says, “We are not recommending NOTA as the best option. For us, it is No, Till An Alternative.”

One can’t but appreciate the artfulness of Yadav’s formulation. But, if one wades through its tiring convolution, it broadly suggests a part of this, or all of this: ‘No party is an option and we are not contesting, so you may press NOTA.’ or, ‘We’ll pick alternatives who may not win, but cut the votes of mainstream secular, liberal parties because our alternatives will be progressives like us.’

If one were to give an example of this alternate-candidate idea from closer home, in the Bangalore Central parliamentary constituency Swaraj India backed actor Prakash Rai, who had initially sought the Congress’s support. As an independent, secular alternative, he is now widely expected to chip off a small portion of the Congress’s vote share in a small victory-margin election, benefitting the BJP.

The Congress candidate here is a Muslim. If this is the case, then what happens to Yadav and his party’s stated purpose of defeating the BJP? Interestingly though, Swaraj India-backed Prakash Rai went and campaigned for AAP candidates in Delhi, where Yadav clearly wanted voters to exercise the NOTA option. This is where the tail of the convolution meets the head to complete the circle. 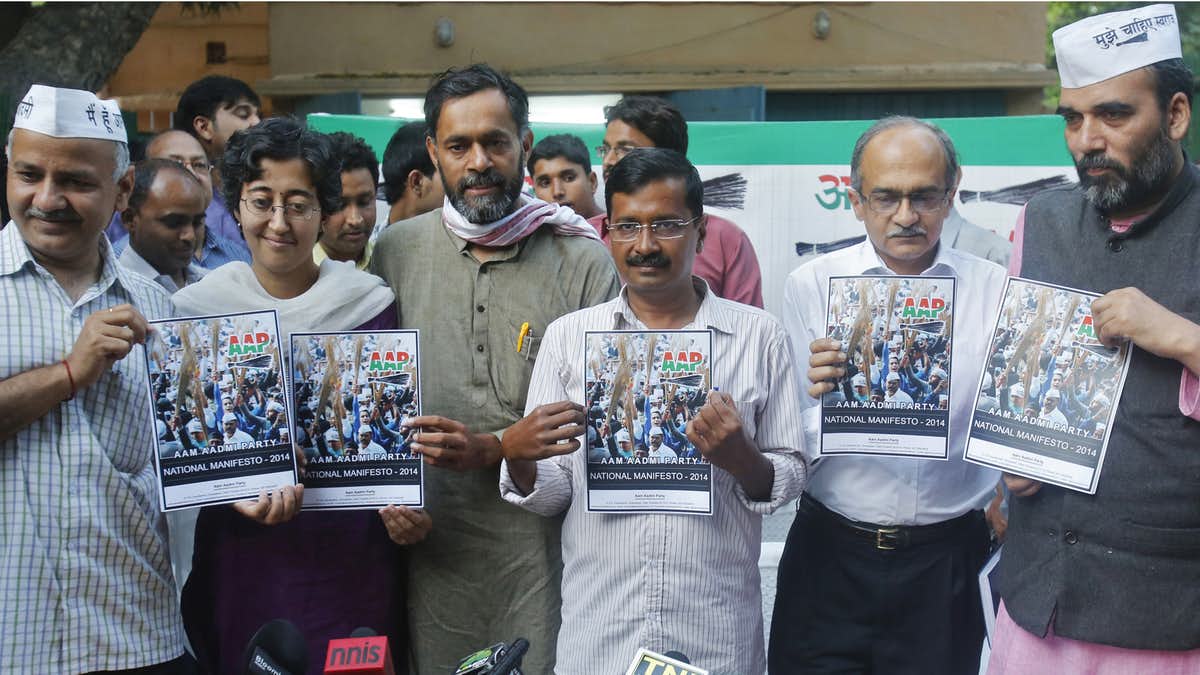 This is not the first time Yadav has taken such a complex position. During the Karnataka Assembly polls, Swaraj India put up Darshan Puttannaiah as a candidate for the Melukote seat in Mandya district. He was the son of Puttanaiah, a stalwart farmer’s leader who had passed away a couple of months before the polls as a sitting legislator from the seat. Darshan had relocated from the US to contest his father’s seat.

Out of sheer respect for Puttanaiah (who had been elected on the Sarvodaya party ticket, but by default had become a Swaraj India MLA after the two parties had merged), Congress did not field a candidate in Melukote. Besides, chief minister Siddaramaiah and some of his cabinet colleagues campaigned for Darshan.

But when Yadav came to campaign in Karnataka, he began making statements against the Congress, much to the consternation of the Congress and his party colleagues. Congress was supporting his party’s lone winnable candidate. Finally, the seat went to Deve Gowda’s JDS. One does not wish to speculate if what happened in Melukote, in 2018, was akin to a NOTA position, but it certainly found a clearer expression in 2019.

As Delhi goes to polls in the sixth phase, Yadav’s call and clarification about NOTA gives us an immediate trigger or context to revisit the political idea, but we are still at a loss to define its purpose and power. The intellectual romance with the idea is pretty obvious.

Summoning nihilistic principles, or other philosophical postulations to discuss it offers a certain academic exhilaration, but nothing is clear about the possibilities of this microorganism in a political laboratory. One does not know if this will ever grow into something that will cure and tame our political culture and class.

Also read: Interview: Yogendra Yadav on How the Swaraj Abhiyan’s Political Party Plans to Be Different

One interesting aspect of the NOTA provision is that even if it becomes number one in a constituency, the person who gets the highest valid votes is the winner. True, the law leaves no gap as regards plain victory, but what happens to the moral mandate, without which the victory is pyrrhic?

What does it do to the victor-by-law, who has to function with the notion that there is, paradoxically, a real, yet an abstract, victor-by-principle? What if in an election an entire town, or city, offers a result like this, where NOTA is number one? This may be in the theoretical realm, but there is a fictional exploration of this idea by José Saramago, the Portuguese Nobel laureate. In his novel Seeing, first published in 2004, he does not deal with NOTA per se, but something rather similar: blank ballots (it may not be NOTA, but as they say in Kannada, it’s about the daughter’s husband, not the son-in-law).

An allegory from Saramago

In this splendid allegory, municipal elections are held across the nation, and 70% of the ballots are returned blank in the nation’s capital city. This astonishes the national government, which smells a conspiracy against the state, but as directed by law, repeats the election process within a week. This time, they deploy spies to monitor people in queues outside polling stations, and record their conversations. But yet again, the curious citizens of the capital return 83% of the ballot blank. As the mystery of the ‘blank-voting insurgency’ deepens, the unnerved government suspends the constitution and clamps a national emergency. They round up a cross-section of citizens, suspected ‘blankers,’ conduct polygraph tests, and when it yields nothing, their paranoia pushes them to the next incredible step.

The prime minister (“not some vulgar snake-oil salesman promising miracles”) decides to shift the seat of government to another city, and orders withdrawal of all security forces from the capital (“this was not a coward’s way out, but rather a strategic move of the first order, unparalleled in its audacity, one whose future can be touched with the hand, like a ripe fruit on a tree”).

This, as an apparent measure of punishment to citizens of the capital who had betrayed their government, and in turn democracy. The citizens are unfazed, they quietly organize themselves, and go about with their routines as if nothing has befallen them. This indifference infuriates the government in exile from the capital. The interior minister masterminds a bomb blast (‘operation xenophon’) in a metro station to make people seek out their government, and plead for its return.

Although the minister gets a bomb of a higher intensity planted, than actually approved, and causes an increase in the death toll, this episode too passes with the population stabilising itself quickly (“there isn’t a single shout, a single long live or down, not a single slogan saying what it is the people want, just this threatening silence”).

There is no arson or rioting, and no storming of the presidential palace. The crowds appear organised but without a leader. This is a snub the government in absentia cannot fathom. They contemplate reforming the electoral law, by which blank votes would get equally distributed amongst all the parties as valid votes.

At this point, they conveniently lay their hands on an anonymous letter, which tries to pin down the masterminds behind the apparent ‘hypnotic’ act on the masses. They link it up with an epidemic (‘blind plague’) that nearly blinded the entire population four years ago for a few weeks. They argue that the nation going blank literally, then, and going blank metaphorically via the ballots, now, has a deep subversive connection.

Expectedly, an investigation is conducted by a handpicked team with a lot of false assumptions, fake evidence and threats, with media as cheerleaders, collaborators and agent provocateurs. At the end of it some innocents are killed, rather murdered. This manufactured plot and calibrated climax the government deploys to trumpet its success over a grand seditious design.

It is left unsaid in the novel if the emergency was lifted. Perhaps that is immaterial, when the conditions of siege have been normalised in the minds of the people, and those in government. It is also not revealed as to what triggered the blank votes. If anti-climax assumption is allowed, one may want to attribute it to the sheer boredom of voters, or an undercurrent of disenchantment that democracies take an inordinately long time to reveal.

Seeing is a lyrical meditation on the nature of power, the political class, the passivity of the people, the substance of elections and of course plots, ironically hatched against people in a system supposedly run for, and by the people. There is a lot in the novel, like in any great work of art, that resonates our own immediate social and political setting.

If there are automatic overlaps with all that we have witnessed, debated and made an inventory of in India, in the last five years, plays up as we read the novel, it is not deliberate, but inevitable.

Coming back to NOTA and Yogendra Yadav, there is nothing innocuous and without meaning.

Sugata Srinivasaraju is a senior journalist and author