As the Telangana Pradesh Congress Committee president begins his campaigns, KCR must work out a way to retain the upper hand. 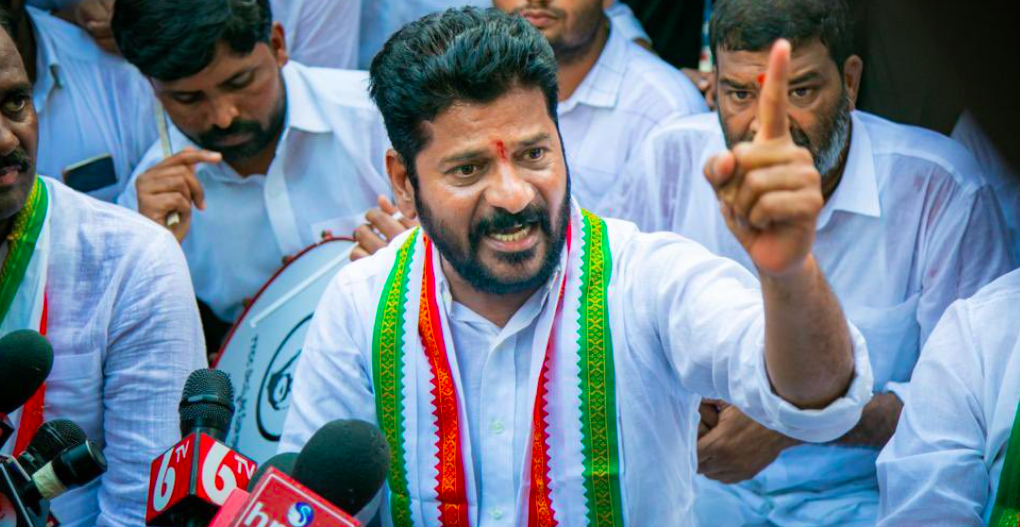 Hyderabad: On September 18, at a massive rally at Gajwel, the constituency of Telangana Chief Minister K. Chandrashekar Rao (KCR), A. Revanth Reddy, president of the state Congress party, sent a strong message to both the ruling Telangana Rashtra Samithi (TRS) and the Bharatiya Janata Party (BJP): that the Congress under his leadership would not only strongly challenge the TRS in Telangana, but also the saffron party’s space in the opposition.

The rally had been organised by the Congress as part of the Dalit Girijana Atma Gaurava Dandora, a gathering of Scheduled Castes and Tribes, in KCR’s home constituency.

While most politicians make grandiose claims in their speeches, it appears that Revanth Reddy is serious about his challenge. After taking over as the state Congress president on June 26, he charted out a marathon agitation from October 2 to December 9 named dharma yudham or holy war against KCR for reneging on the promise made by his party during the statehood movement to address the problem of unemployment. KCR, who has now been chief minister of Telangana for seven years, was then the face of the statehood movement with his three electrifying promises – neellu, nidhulu, niyamakalu (water, funds jobs).

Revanth was given the reins of the state Congress after the Grand Old party lost two state elections in a row as well as a huge number of its lawmakers to the TRS. For example, when the Congress won 19 assembly seats in the 2018 elections, as many as 12 of them quit and joined KCR’s party.

Since then, Revanth’s ability to hit back at KCR in his own idiom, his ability to galvanise young people, his fighting spirit and his massive presence on social media platforms has enhanced the visibility of the Congress in the state and given the party a fresh lease of life, said K. Nageswar, professor of journalism at Osmania University. 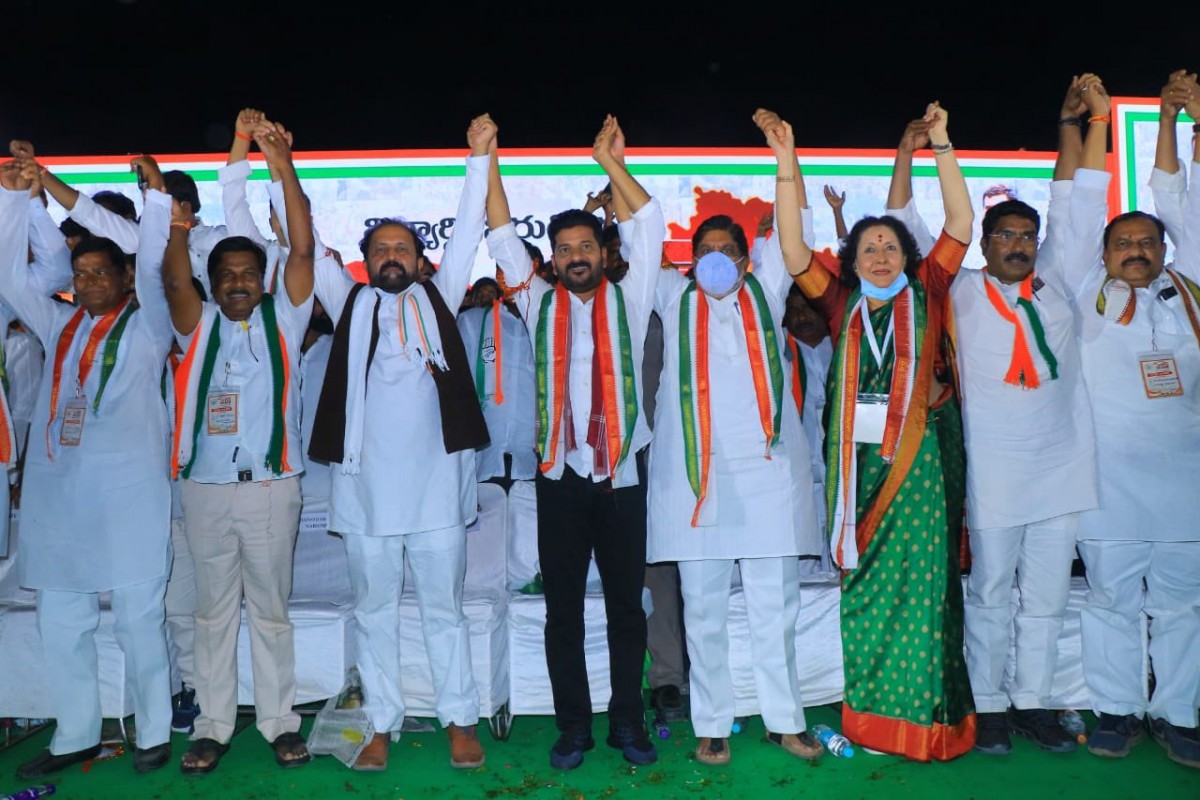 Battles on every front

Revanth’s battles lie on several fronts. His party needs not only to be perceived as a strong challenger to the ruling party, but also as a more than viable opposition party, which means Revanth is taking on the BJP as well.

To tackle KCR, the state Congress president has battles on two fronts. On the one hand, he attacks the TRS for its various commissions and omissions and heightens the public’s feelings of anti-incumbency. On the other hand, he is working to bring back to the Congress its original supporters from among unemployed young people and marginalised sections of the Dalit and Adivasi communities.

Feelings of anti-incumbency already run high. The ruling TRS has been accused by all the state’s opposition parties of failing to fill 1.91 lakh job vacancies in various government departments since it came to power in 2014. KCR is also perceived as ruler from a ghadi (the fort-like residence of a feudal lord in the time of the Nizam of Hyderabad) who allows the common people no access to him.

As for Revanth’s need to rebuild Congress support from among the marginalised sections of society, disillusionment among the Adivasi communities after KCR failed to resolve a conflict between the Lambadas, a sub-tribe in the plains, and the Koyas, another sub-tribe in the forests, over shared reservations, has been a huge help.

Tackling the BJP has apparently been easier for Revanth, despite the saffron party’s strength in both the country and the state. In many ways, the TRS had already done the job for him by changing the political landscape in the state since the March 2021 by-elections in Nagarjuna Sagar assembly segment and the legislative council elections for the graduate constituencies of Hyderabad, Nalgonda and Khammam. In these elections, the saffron party lost its sitting seat in Hyderabad to TRS rookie Vani Dayakar Rao, the daughter of former Prime Minister P.V. Narasimha Rao, and several other seats besides.

KCR has also triggered confusion in the BJP ranks by creating the impression that he is growing close to the BJP-led government at the Centre, pointed out analyst Shaik Zakir.

For example, immediately after the Greater Hyderabad Municipal Corporation elections on December 1, 2020, the Telangana chief minister travelled to Delhi for one-on-one interactions with Prime Minister Narendra Modi and Union Minister for Home Affairs Amit Shah. In these meetings, which were held three times in four days, KCR apparently attempted to convince the BJP top leadership to work with the TRS in Telangana, arguing that that if the BJP were to engage the TRS in a fight to the finish, only the Congress would benefit.

The TRS chief also lobbied the Union government for a 1,200 square yards site in the prime locality of Vasant Vihar as his party’s office in the national capital. KCR laid the foundation stone for this office on September 2.

Soon after KCR’s meetings with the BJP leadership, a news report published in a Telangana-based Telugu language newspaper speculated that the BJP-led National Democratic Alliance at the Centre was considering KCR as a future vice president of India. The present incumbent, M. Venkaiah Naidu, completed four years in office on August 11 this year.

This April, an apparent seat-sharing agreement between the BJP and the TRS in a by-election in the Lingojiguda division in the GHMC in which the TRS opted out of the contest after a request from the BJP bewildered the ranks in the saffron party. Regardless of the mutual understanding between the TRS and BJP, the Congress won the by-poll in this division. 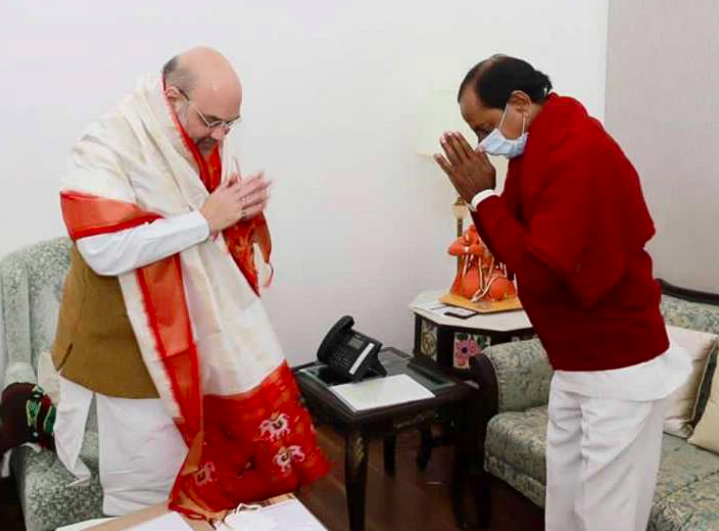 A file image of Amit Shah and KCR. Photo: PTI/Files

This string of developments, Zakir told The Wire, has only increased the confusion among the BJP cadres on whether to treat KCR as an ally or a rival.

Congress back in the game

The confusion of the BJP’s rank and file is good news for Revanth Reddy. The state Congress chief has successfully built a narrative showing that the TRS and the BJP are two sides of the same coin, which seemingly works well with some sections of Telangana society, such as the Muslim minorities.

The Congress party’s pan-Telangana presence in terms of cadres, voters and organisational strength is also an asset for Revanth Reddy. The party, it is believed, lost the past two elections because of the lack of viable leader, but with Revanth now at the helm, there is a growing belief that the Congress is genuinely able to not only battle the TRS, but even win.

Thus KCR’s biggest competitor for the state elections that will be held in a couple of years is the Congress, not the BJP. This is because the BJP has to go a long way to extend its footprint across the state. Though the saffron party won four Lok Sabha seats from Telangana – three in north Telangana and one in Secunderabad – and was able to defeat KCR’s daughter, K. Kavitha, in Nizamabad in that election, the party’s presence in southern Telangana, particularly erstwhile Communist bastions like Khammam and Nalgonda, is negligible.

Even though the BJP’s state president Bandi Sanjay is attempting to reach the whole state by walking from Bhagyalakshmi temple in the heart of the Muslim-dominated old city in the state capital to Nirmal, his speeches highlight religious issues more than the everyday problems of the common people, which could reduce the interest of the public, say political observers.