The Sangh parivar knows that its Hindu rashtra project is close to complete. It cares about little else. 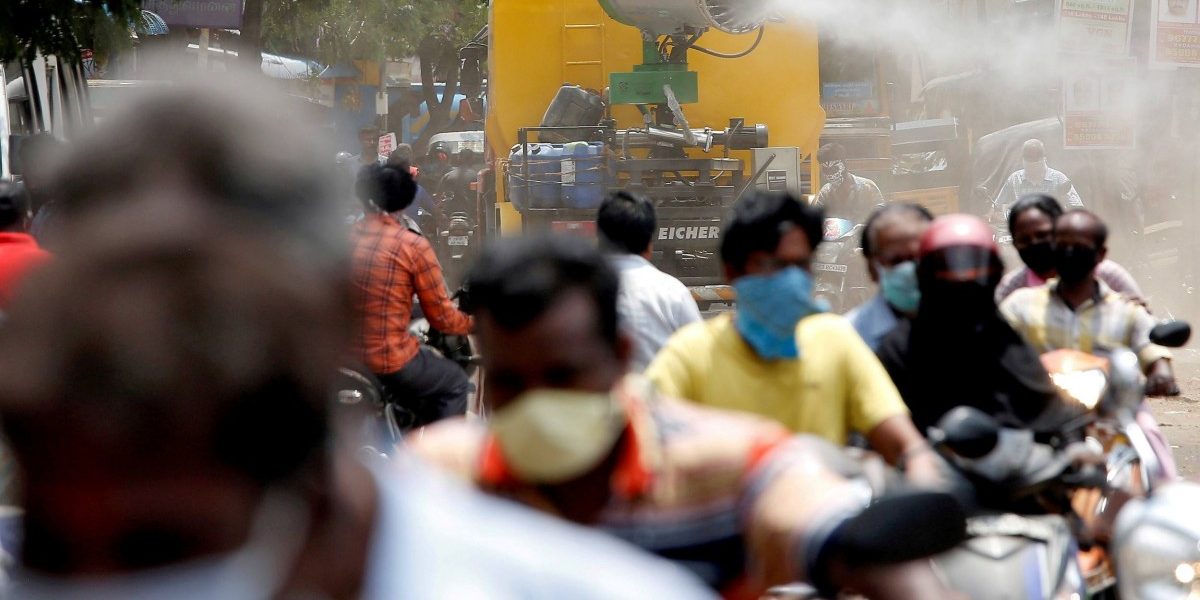 The nation seems to be in a state of suspended animation. The loss of lives due to the coronavirus pandemic, the unprecedented collapse of the economy, the loss of jobs, the destruction of businesses, the short shrift to the states and the erosion of the federal structure seem to have numbed the nation. The bizarre behaviour of high-level functionaries such as governors of states, chief ministers, ministers of the Central government and state governments, chief secretaries, directors general of police, not to forget the prime minister (‘Didi, o Didi’, for one) and the home minister, are considered to be the likely manifestations of this disorientation.

And if this is not enough, the demolition and reconstruction of the major seat of governance in the country while hundreds of thousands of people are dying as a result of the coronavirus pandemic should make the priorities of the government clear.

In such a situation, the conspicuous silence of the top leadership of the country, and the accompanying lack of action, has piqued people’s curiosity. “What is the leadership up to? Why is decisive action not being taken?” is part of the public discourse.

Is it possible that the powers-that-be (PTB) are unaware of the rampant disaffection in the country? And if they are aware, then why don’t they appear to be doing anything concrete about it? Responding to these questions requires recalling some history.

It is trite to say that the BJP is an offspring of the RSS, and consequently, enjoys total support of the RSS. The creation of a Hindu rashtra has always been an avowed objective of the RSS and the BJP. Ensuring primacy for Hindutva (Hinduism as interpreted by the Sangh parivar) has been an issue which the BJP has followed with great consistency and perseverance over the years. It has been a prominent part of the BJP’s election plank in all elections.

In keeping with this, several Hindutva-enabling activities and policies were part of BJP’s election plank for the 2014 Lok Sabha elections. The unprecedented success confirmed the general belief that the RSS and the BJP combined were the PTB in the country, replacing whatever may have been in place before that. This shift in the PTB was much deeper than ever even thought of during the earlier BJP-led government headed by Atal Bihari Vajpayee from 1999 to 2004.

Also read: Why We Cannot Memorialise the COVID-19 Dead

The first government led by the BJP and the RSS (2014-2019) appeared to be exploratory, experimental. It tried to discover how the levers of state power operated, and whether their way of operation can be influenced or modified to suit partisan purposes. It tried to test the limits to which even constitutional institutions such as the parliament, the judiciary, the Comptroller and Auditor General (CAG) and the Election Commission of India (ECI) could be pushed to achieve its objectives even when the legitimacy of the objectives was clearly questionable. The PTB appeared to be very comfortable and confident in dealing with the so-called ‘elected’ wing, consisting of MLAs of different states, and MPs. This in part led to its political success in the states where it formed or became part of the government. The Hindutva-enabling activities and policies which were part of BJP’s election plank seemed to have been kept on the back-burner while the government and its parent firmed up their footing.

Then came the 2019 election, and the BJP won even more Lok Sabha seats than it did in 2014. The strength of the electoral victory and the experience gained in the last five years about managing the levers of state power emboldened the dominant coalition to embark on its real agenda with full force.

This background should explain why the PTB, which is often referred to as the government, does not seem to be concerned, or doing much, about the economy. It seems happy with getting the Reserve Bank of India to transfer money to itself, and sometimes just by withholding payment of the states’ share of the Goods and Services Tax.

The answer to the questions raised earlier about the apparent disinterest or unwillingness of the PTB to dosomething is that ensuring a healthy growth of the economy is not important for the ruling dispensation. It is not even their objective. All the talk of economy in the first term was used to set the stage to launch various projects to achieve the real objective, establishment of a Hindu rashtra. Of course, it doesn’t hurt if some of the cronies (e.g. Ambanis, Adanis, and some other corporates) continue to increase their wealth disproportionately while the economy as a whole nosedives.

Enter COVID-19. What followed, and continues to unfold, clearly shows that the country has very seriously fumbled in its response to the pandemic. The question of interest is: Why, even after almost a year and a half, does the Central government appears to be unable, and at times unwilling, to come to grips with the pandemic? The greatest curiosity is about the unwillingness.

It seemed to be the ruling dispensation’s belief that pursuing the Hindu rashtra agenda required that the differences between religions be highlighted and magnified. It was assumed Hinduism is superior, and it was axiomatic that Hindus should enjoy a special, exalted status in a Hindu rashtra.

The above also resulted in the consequential denigration of religions other than Hinduism. Islam, being the largest numerical non-Hindu religious group, became a favourite target of such denigration. The fact that the country was convulsing in the struggle for freedom from the British colonial rule, in which a separate country for Muslims was one of issues on the table, facilitated religious polarisation.

The struggle continued, and over time the parivar realised that their Hindu rashtra agenda can only be put into effect if they have access to state power. The BJP was the instrument to acquired political power. After many electoral struggles and ups and downs, in 2014, the parivar realised its ambition. Attempts to create social strife for creating differences continued in different parts of the country. What was earlier done surreptitiously and sporadically now acquired state support, and started to happen with greater frequency and intensity.

This is when the coronavirus struck. In a society where social strife was being created and nurtured effectively by the state, a catastrophic occurrence like COVID-19 created complete mayhem. Such chaos and mayhem usually lead to two outcomes. First is the phenomenon called, “Each one for him/herself.” The confusion and uncertainty make people look out for self-interest.

The second outcome is that such chaotic, almost anarchic conditions make it possible, and certainly easier, for power groups, particularly physical power groups, to take control of the state apparatus, of social institutions, of territories, and of society.

This is where we are today. There is a dominant group (the PTB) which has a sharply focused agenda that it has nurtured for almost 90 years, and there is a cadre of people trained in the martial arts ready to take over. The country is on the brink of actually becoming a Hindu rashtra. And that is why the PTB are quite at ease at what is going on.

Whether the above conjectures and speculations have a kernel of truth or reality, or they are the result of a very fertile but perverted imagination, is not important. What is important is for each one of us to think through what, and where, this country will be after 10, 15, 20 years, and will I, personally, not in the abstract, be happy and satisfied that my children or grandchildren are living in such a society.

And if there is any doubt whatsoever in our internal, personal responses to the above questions, then the time to stand up and be counted is now.

Jagdeep S. Chhokar is a former professor and a concerned citizen.