Why the Maharashtra Events Could be a Significant Tipping Point

The Shiv Sena cannily read the altering zeitgeist of politics on the ground and astutely grabbed the moment to distance itself from an erstwhile paradigm now yielding diminishing returns. 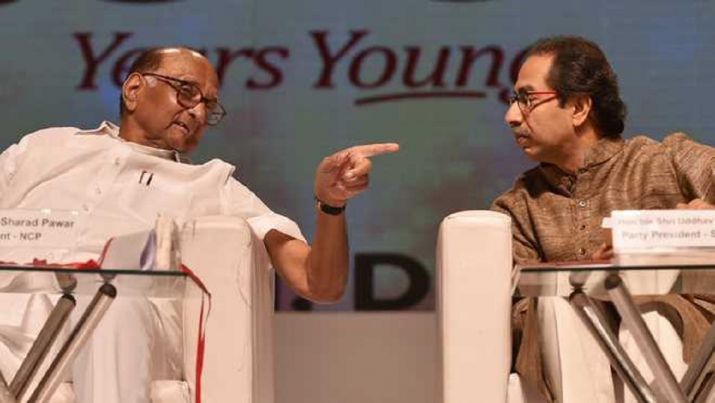 On the face of it, the distasteful occurrences in Maharashtra may seem just another episode in India’s manipulative politics — rather more elaborate than we may have known thus far. But there are aspects to it that suggest a significant tipping point may have been reached after six years of an undifferentiated paradigm.

If a striking turn of phrase may be excused, it is conceivable that the rightwing bullet train may have come to be halted in both a literal and metaphorical sense.

The coming apart of the Bharatiya Janata Party and its longest and most steadfast ally – the like-minded Shiv Sena – paradoxically at the coincident moment of the ‘resolution’ of the Ram temple agitation and the reading down of Article 370 suggests the beginning of the evacuation of  Hindutva politics.

This evacuation seems now to be replaced by a reinstatement of an aspiration on behalf of the BJP’s allies, most notably, the Sena – to re-foreground their objective regional identities and agendas.

The revolt of the Shiv Sena may have been ostensibly grounded in the truthful or not truthful reneging of the hitherto dominant nationalist party on a promise the Sena claims it had made to them about sharing the chief minister’s post in Maharashtra. But, what is more likely is that this was the Sena’s moment to reoccupy its pride of political place in the area and constituency of its birth and making, given that the land of the Marathas remains its only authentic space for political existence and control.

The Shiv Sena, contrary to allegations being levelled against it for having now abandoned its Hindutva soul-force, can well answer that its role in achieving the resolution of the Ayodhya dispute, such as that resolution is, and in the revocation of “special status” to the erstwhile state of Jammu and Kashmir are firmly on record. Thus, the Sena may now feel that it can turn to the people’s concrete issues with a clean conscience, without being branded a convert to any doctrinaire secularism.

It may be recalled that the Shiv Sena – which historians know to have been in large part a creation of the Congress in the 1960s put in place to counter the then left wing, unionist dominance in Maharashtra – had gone on to support the Internal Emergency of 1975, back the candidature of the Congress’s A.R. Antulay, followed by lending support to Pratibha Patil and later Pranab Mukerjee as presidential nominees of the Congress. This was a record that set it apart from its Hindutva ally at crucial points in recent times.

Post the reading down of Article 370, an “achievement” that the BJP sought to exploit chiefly and brazenly during its election campaign in Maharashtra, the Sena could see that the dividends of that plank did not yield the fruit the Hindutva lobby had much hoped for. Nor was it oblivious to the ignominious defeat of  a stalwart turncoat like Udayanraje Bhosle in Satara at the hands of  a competing Maratha party like the NCP on the back of a concerted campaign on farmer’s distressful issues.

Taken all together, the Sena cannily read the altering zeitgeist of politics on the ground and astutely grabbed the moment to distance itself from an erstwhile paradigm now yielding diminishing returns. If that is understood and accepted, the Sena’s willingness to do business with the ‘secular’ Congress and NCP may not seem such a shocking turnover.

On the other side, there is much heartburn, especially among Congress people, at the thought of tying up with the Sena – given the apprehensions of how this may affect the prospects of the Congress among the minorities in Kerala and elsewhere. And yet, a more thoughtful application of mind may have suggested to the Congress that this was indeed a moment to fracture the Hindutva lobby and debilitate its pan-Indian hold in the days to come. Not entirely as weak an argument as it may have seemed to those used to more ossified notions of ideological purity.

Together with the Congress, the astute doyen of Indian politics, Sharad Pawar, may have come to see the moment as one which afforded the secular parties a chance to re-assume a lost constituency and begin to nibble at the other bastions of the ruling BJP by returning their politics to matters of pressing livelihood among the bulk of India’s dispossessed.

As to the charge that the new coalition partners took too long to come to an understanding, let us recall that Angela Merkel in Germany needed over two months of negotiations with several different political formations to arrive at a government; and that, months after the recent elections in Israel, government formation is still underway. The lesson is that wherever politics is too diverse and fractious, this sort of thing must be accepted as inevitable to democratic  decision-making. Thankfully, neither Germany nor Israel have any provision for “president’s rule.”

These signals can already be seen to be received with greater attention by other allies of the BJP in other states. That the Lok Janashakti Party and the All-Jharkhand Students Union in Jharkhand have chosen to go on their own steam into the elections there is a pointer to a shift  that could well betoken the inauguration of realignments of consequence, with repercussions  likely in states like Bihar and Uttar Pradesh in the days to come.

That even the Samajwadi party in Maharashtra has not hesitated to join the opposition camp strengthens such a reading of how things may shape up before long on a wider and more  effective scale.

Indeed, there are voices among political analysts concerned about the seemingly unstoppable rightwing Hindutva putsch against the constitutional republic which argue that the time may  have come for not just larger coalitions but some unities as well – if the Hindutva forces are to be decisively evicted from dominance.

For the future, a united Congress?

In that regard, one bold idea is that those who came out of the Indian National Congress in yesteryears on issues seemingly not ideological but ephemeral (and, indeed, no longer operative)  should consider returning to the parent party. The three obvious cases here pertain to the NCP, the Trinamool Congress and the YSR Congress.

Should this begin to be countenanced, the Indian National Congress, now in the process of a remake itself, can re-educate itself about the value and democratic worth and desirability of devolving political initiatives and power to strong satraps with a full and free remit to consolidate alternative politics based on concrete people’s issues in the areas of their operation – on behalf of a pan-Indian Congress bolstered by such unity and devolution.

Likewise, it will be for the many Left parties to revisit the real or unreal contentions on which a united Left came apart, and to work earnestly and with the future of the secular republic in mind to accept the necessity for not just contingent Left unity but the movement towards forging a united Communist Party. One that, learning from the experience of the last five or so years, may shed its anti-Congressism and become a leading force to keep in place the united Congress’s secular remake and its lost capacity to run a welfare state.

Much of this, of course is easier said than done. But if not done, India’s secular and democratic political formations may have only themselves to blame should a full-blown totalitarianism come to stay.