Much to the chagrin of the RSS-BJP combine, the farmers' movement has now assumed a syncretic character, uniting diverse communities who are now willing to expand the movement to other issues of survival. Farmers shout slogans as they take part in a three-hour "chakka jam" or road blockade, as part of protests against farm laws on a highway on the outskirts of New Delhi, India, February 6, 2021. Photo: Reuters/Adnan Abidi

The farmers’ resolve to continue their protest even after Prime Minister Narendra Modi’s announcement regarding the rollback of three contentious farm laws indicates the movement’s potential to challenge Hindutva politics. This is the same politics that has guided Modi’s rule over the last seven years.

What appears to be a lasting irritant for the RSS-BJP combine is that the farmers’ movement has now assumed a syncretic character, uniting diverse communities. The protestors are now willing to expand the movement to other issues of survival – from social justice to civil rights.

A close look at the demands which came up during the Kisan Mahapanchayat organised by the Samyukt Kisan Morcha in Lucknow on November 22 helps us understand this better.

Also read: India’s Farmers Have Shown the Way to the Long Democratic Pushback

Bharatiya Kisan Union (BKU) spokesman Rakesh Tikait said that the movement would continue to press for the statutory guarantee of minimum support price (MSP) on the C2+50% formula (meaning 50% above the cost of production, which the prime minister himself has advocated), dismissal of Union minister Ajay Mishra ‘Teni’ whose son’s vehicle allegedly mowed down three farmers at Lakhimpur Kheri, land for a memorial for the martyred farmers, compensation for the families of deceased farmers, withdrawal of the Power Regulation Amendment Bill and withdrawal of the cases against farmers.

Developments after the prime minister’s address to the nation announcing the repeal of the laws have amply indicated that farmers have lost trust in his words and they won’t relent until the same are repealed through due procedures in the parliament. They have also stepped up protests for a legal guarantee for MSP. 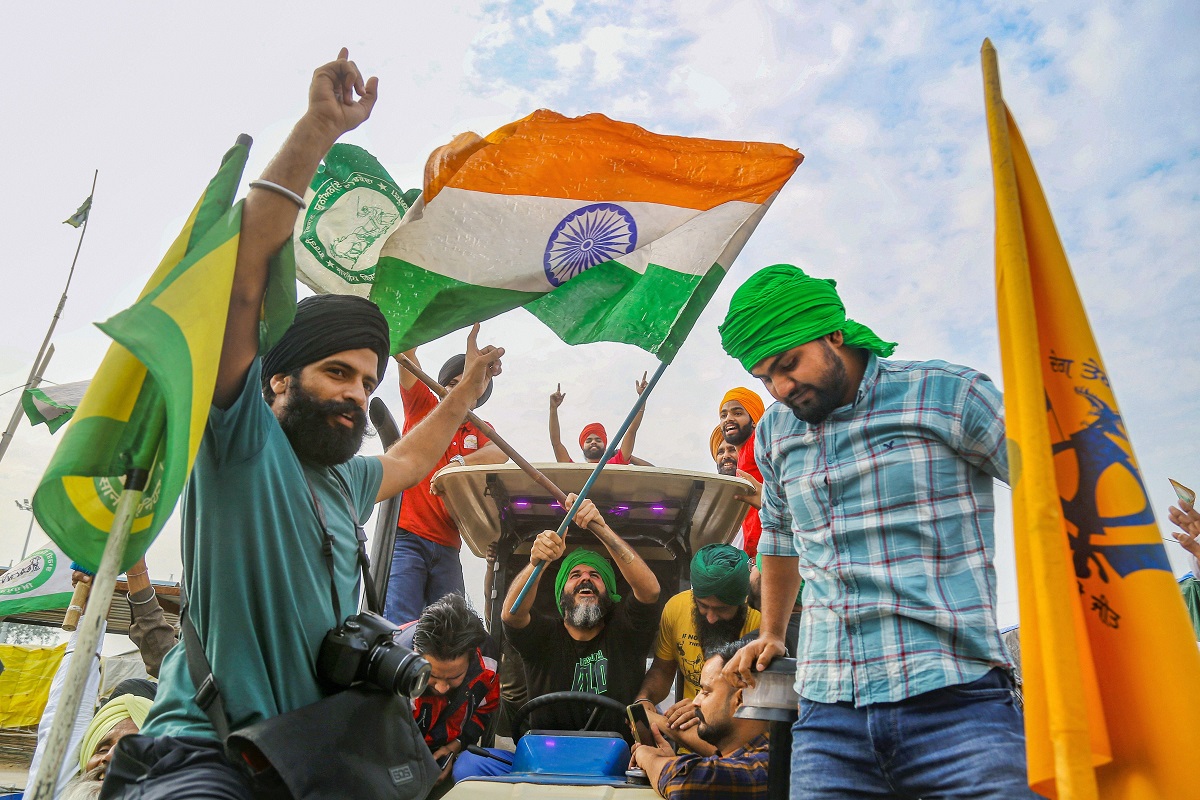 Suspicion of the government is still high among farmers. Although the prime minister promised the rollback of laws, he did so only after lavishing praise on them – according to him, the problem per se is not the laws, but failure on the part of his government to convince farmers of their “merits”. This was soon followed by remarks from Rajasthan governor Kalraj Mishra and BJP MP Sakshi Maharaj who hinted that the laws could be brought back at a later stage. Rather than allaying the fears of farmers, these remarks have further fuelled distrust.

Now the overzealous RSS-BJP cadres, supporters and sympathisers are on a spree to vilify farmers for adding “impractical” demands to fuel “anarchy”. But close scrutiny of the farmers’ stir reveals that they haven’t added anything new to their demands.

The demand for the MSP is far older than the three farm laws that the Modi government enacted in the parliament when the nation was shut down to fight COVID-19. Importantly, the demand for regulatory guarantee to MSP had Modi’s backing from when he was Gujarat chief minister and had signed a memorandum recommending the same to former prime minister Manmohan Singh in 2011. Moreover, Modi advocated for the guarantee of MSP at numerous public meetings that he addressed in the run-up to becoming the prime minister in 2014 and winning farmers’ votes.

The demand for the dismissal of Ajay Mishra, a memorial for martyred farmers and the withdrawal of cases against them can be seen as byproducts of the government’s mishandling of the movement.

The BJP cadres, supporters and sympathisers are shocked that Modi’s omnipotent image now stands compromised. They angrily wish that the agitating farmers return home after the prime minister’s address as soon as possible to salvage his “strongman” persona.

But the fact remains that as many as 671 farmers died, according to farmers, agitating and braving harsh weather conditions. The BJP ministers and MPs used abusive language against the protestors.

“Is the izzat (prestige) of a Narendra Modi more precious than the martyrdom of 700 farmers? It’s simply inhuman to keep the izzat of Modi above the martyrs,” said Anuj Gangwar (35), a resident of Agras, a large village in Bareilly district of western Uttar Pradesh.

In fact, Anuj’s remarks symbolise the sentiment of nearly 20,000 youth largely unemployed and involved in agriculture at Agras. Many others milled around Anuj to assert: “We will worship the memorials of the martyred farmers. The memorial will keep their memory alive in our minds. We damn care for Modi’s izzat…we are not shameless.”

Two recent videos of journalist Ajit Anjum’s “Kya Chahta Hai UP (What does UP wish)” bring to the fore the uniting and syncretic nature of the farmers’ movement.

A Jat youth saying that his surname is Choudhary at a Baghpat village tells Anjum in a video, “Hum-e nasha pila diyaa thaa. Yeh, Hindu-Musalman jhagra ka nasha thaa. Usi nashe mein humn-e Modi/Yogi ko vote diya. Oh nasha ab toot gaya hai (We were made to get intoxicated by Hindu-Muslim differences. We voted for Modi, Yogi under that influence. That influence is now gone).”

In another video shot at a coffee shop at Ferozabad, a Muslim youth says, “We, the Muslims and Hindus, had been living in peace in Ferozabad, Muzaffarnagar, Hathras and Baghpat regions for centuries. The RSS-BJP engineered riots, pitting us against one another and dividing us. We have understood the game. We will join our Jat, Yadav and other Hindu caste brothers in voting out the BJP from power.”

Not only is there an emerging Hindu-Muslim unity but Anjum’s videos also reflect signs of unity at various layers of the society — farmworkers are working shoulder to shoulder with farmers, for they know that they would be the first beneficiaries if the farmers’ income rises.

The protracted farmers’ movement seems to steadily unite the Yadavs, Jats, Koiris, Gangwars, besides a number of other poor castes serving as farmworkers. At the Lucknow Mahapanchayat, people were heard talking about expanding the ambit of the farmers’ stir to incorporate issues of price rise and burgeoning unemployment.

Parallels between farmers’ stir and JP movement of 1974

There are some similarities between the JP movement of 1974, also referred to as ‘total revolution’, and the present kisan andolan (farmers’ movement).

Like the JP movement which had its roots in the students’ protests against the rise in hostel and mess fees at a college in Gujarat, the farmers’ movement too began with Punjab farmers initiating the protest against farm laws enacted by the government.

Like the students’ protests which spread to most parts of north India resulting in the overthrow of the Indira Gandhi government in 1977, the farmers’ stir now has spread to large parts of Haryana, Uttar Pradesh, Rajasthan, Madhya Pradesh, Uttarakhand and Himachal Pradesh, changing the narrative on the ground in northern states and securing goodwill in southern states.

The JP movement, which was initially a students’ protest had united diverse political parties — Jan Sangh, Lok Dal, DMKP and many other socialist and right-wing parties — later merged into a single party known as Janata Party led by Chandra Shekhar.

The politics of Narendra Modi-Amit Shah thrives on the divisions in society, carefully calibrated to suit the Hindutva ideology.

Rakesh Tikait too has emphasised this: “They (BJP) played the politics of Jats versus non-jat castes in Haryana. They engineered riots pitting the Muslims against Jats in western Uttar Pradesh. They broke Mulayam Singh Yadav’s family and tried to foment dispute in Lalu Yadav’s family.”

It is to be seen if the farmers’ stir can eventually unite political parties and people at large on the issue of survival, livelihood, employment, rights, justice and other socioeconomic aspects to challenge the hegemony of Hindutva politics.

Coinciding with farmers stepping up their efforts to intensify the movement, BJP’s national president J.P. Nadda addressed a rally at Gorakhpur on Monday, November 22, saying, “It’s the responsibility of the nationalist forces to oppose the supporters of Mohammad Ali Jinnah in UP.”

A comic at Bareilly asked, “Will Jinnah be a candidate in UP elections?”