As elections approach, the embattled Akali-BJP alliance finds it is so much easier to tinker with religious passions than address popular anger over corruption, the agricultural crisis, an unresponsive government machinery and a high handed ruling elite. 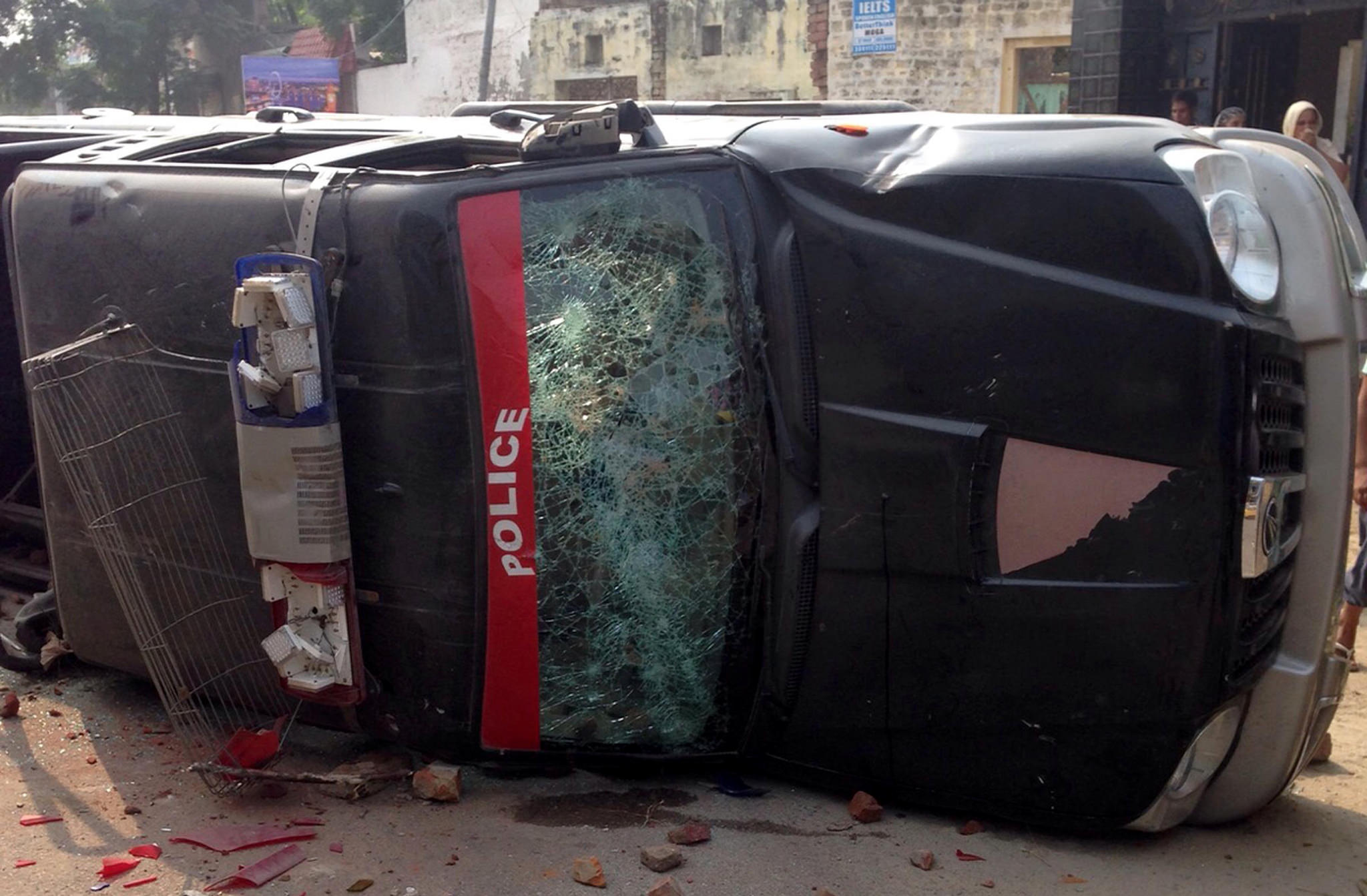 Chandigarh: It is often said of the venerable Parkash Singh Badal, the 88-year-old chief minister of Punjab, that he has perfected the art of hunting with the hounds and running with the hare in balancing the Shiromani Akali Dal’s core Sikh religious leanings while professing to be inclusive towards people of other religions. This has defined his politics for the past two decades and worked well for the past nine years of his rule. But with the 2017 assembly election looming and his son and deputy, Sukhbir Singh Badal in charge of crafting of the SAD’s political strategy, it took just one ham-handed political move by the junior Badal to bring the state to the brink of violence, stirring memories of the dark days of terrorism.

In one fell stroke the SAD lost not just its backbone – Sikh support – but provided an opportunity for fringe hardline groups to tap into the intense anger against the government and create turmoil in the state. A string of desecrations of the Guru Granth Sahib in different parts of the state brought angry Sikhs onto the streets. Pro-Khalistan slogans resounded at several places even though the people protesting were more angry with nine years of perceived corruption, mis-governance and high handedness than any historic sense of injustice. Two persons died in police firing and the head of the state’s police force, a tough cop, was removed over the weekend by a nervous government seeking to placate radical Sikh organisations baying for his scalp.

There is a shaky sense of relief as the agitations are dying down but the problems for the Badals and the Akalis on both the political and religious front just got worse.

It all began with five priests, including the head of the Akal Takht – the supreme temporal seat of Sikhism – suddenly pardoning Gurmeet Ram Rahim of the powerful but controversial Dera Sacha Sauda for blasphemy on September 24. The Dera, with a huge following in Punjab and Haryana has swung from the Congress to the BJP in the past, but because of a 2008 hukumnammah (edict) issued by the Akal Takht, its activities have been curtailed in Punjab and Gurmeet Singh has not entered the state since. The hand of the Akalis, in particular Sukhbir Badal’s political machinations, were clearly visible in the priests’  decision, with the ruling party hoping to benefit from the votes of Dera supporters.

Sadly for the Badals and Akalis, the script did not go according to plan. There was outrage at the surreptitious decision taken by five head priests, one of whom is the jathedar of the Akal Takht, Giani Gurbachan Singh, with fringe pro-Khalistani groups demanding their removal. Even moderate Sikhs were uneasy with the manner in which Gurmeet Singh (accused by the CBI for rape and murder) was pardoned without having to appear before the Akal Takht or giving a written apology. Anticipating more trouble, the Akal Takht revoked this decision on October 16.

As if on cue, desecrated copies of the Guru Granth Sahib began to appear at several places and anti-Dera Sikhs blocked roads. The police zeroed in on two Sikh preacher brothers who allegedly got their instructions from Sikh radicals in Australia and Dubai. Worse. Akali leaders began to be hounded at public appearances and around 100 villages in the state’s Malwa belt put up signs banning the entry of politicians. At several places, SAD politicians were chased away by angry crowds and a few jittery Akalis resigned in protest from the Shiromani Gurdwara Prabandhak Committee (SGPC), popularly referred to as the religious parliament of Sikhs.

In a clear sign that the Badals are losing their stranglehold over the SGPC and through it the Akal Takht, both of which have unabashedly been used for furthering their political goals, the Panj Piaras – the ‘five beloved ones of the Guru’ who perform baptism cemeonies – summoned the five head priests who had pardoned Gurmeet Ram Rahim to explain their decision to the community. The Badal-controlled SGPC retaliated by immediately sacking the Panj Piaras for their temerity in questioning the top priests, but following an uproar they were reinstated on October 25. Now there is speculation that the Akal Tatkht jathedar  and two other head priest,s namely Jathedar of Keshgarh Sahib Giani Mal Singh and acting Jathedar of Takht Damdama Sahib Giani Gurmukh Singh have been asked to resign instead.

It is a desperate move to retain the party’s hold over the ‘panthic’ or the core Sikh vote and appease the radical fringe who are resurgent, but nothing seems to be working for the Badals who thought they could pull off a perilous manoeuvre of straddling two boats. For one, Gurmeet Ram Rahim is anathema for the majority of Sikhs ever since he attempted to impersonate the tenth Sikh Guru Gobind Singh in 2007 – an act which attracted the Akal Takht hukum nammah in the first place. The Dera supported the Congress in the assembly elections held that year and following the hukum nammah, the Akalis who came to power, hounded Ram Rahim and his supporters for the next few years. Now, after nine years of very poor governance during which agrarian Punjab has declined economically and socially, the Badals are wooing the same Dera for its votes. The ill-fated pardon has to be seen in this context.

But what is confounding political pundits is how a seasoned politician like Parkash Singh Badal could have failed to see the danger of wooing the Dera even as he had begun playing ‘panthic’ politics in the past two years or so. In 2013, the Badals allowed radical Sikh groups to make a memorial gurdwara inside the Golden Temple complex for militants killed during Operation Bluestar back in 1984. They have also moved to get several Khalistani militants lodged in jails outside Punjab back to the state. All these moves were aimed at appeasing the increasingly vocal radical Sikh groups. But today, the Akalis are being hounded by the Sikhs whose support they once took for granted. Sikhs are sick of the Badal brand of Sikhism promoted by the SGPC and jathedars beholden to the clan, where time honoured traditions are being flouted or twisted to suit political goals.

As Punjab teetered on the edge of big trouble, political parties like the Aam Admi Party began circling. The AAP sees itself as a serious contender for power and party supremo Arvind Kejriwal lost no time in kicking up dust in the hinterland. Rival contender Amarinder Singh of the Congress promptly accused him of fishing in troubled waters, “adding to the already existing chaos and anarchy”. Akali ally, the BJP, which has its own plans for the 2017 election, is watching in silence. Its ideological fount, the RSS, has been active in Punjab for the past two years, telling the Sikhs how the Akalis have failed to protect their interests. As elections approach, there will likely be more violent outbursts over corruption, the agricultural crisis, an unresponsive government machinery and a high handed ruling elite. Sadly, these are not issues on the radar of the ruling Akalis. Tinkering with religious passions is so much easier. Never mind the danger.