Why One Sidelined BJP MLA Has Modi Worried About Varanasi

A wave of resentment rocked the BJP's confidence after it denied popular MLA Shyamdev Roy Chaudhury, or Dada, a ticket, prompting a visit from Modi himself.

Prime Minister Modi at his roadshow in Varanasi. Credit: PTI 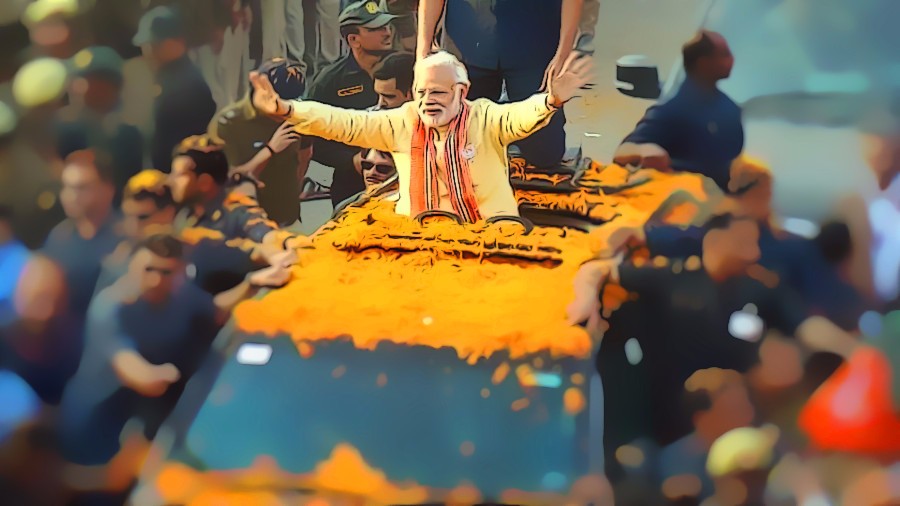 Prime Minister Modi at his roadshow in Varanasi. Credit: PTI

Varanasi: It is said that Varanasi is an eternal city, yet death is an integral part of its routine, from the ever burning funeral pyres at Dashashvamegh and Manikarnika Ghats to the wards of BHU Trauma Centre. Considered the holiest of the holy cities of the Hindus, it is the nerve centre of organised crime in north India, a leading locomotive manufacturer, the biggest commercial hub of the purvanchal, a centre for both progressive writers and the RSS and much more. It is a place where crime mingles with jyotish, and Baba Keenaram’s Aghor tradition of tantra meets the secularism of Kabeer. In totality, it is an accumulation of opposites, the negation of negation, a bunch of contradictions that happily live together.

In this setting, on March 4, Prime Minister Narendra Modi was welcomed by the party MLA Shyamdev Roy Chaudhari, with a bouquet of flowers outside the gates of Kashi Vishwanath temple (which falls under Chaudhary’s constituency Varanasi South). In place of taking the bouquet and moving ahead with his schedule, Modi caught hold of Chaudhry’s hand, taking him along to the temple. No one heard what transpired between them on that walk, but almost everybody is sure of the content. “Modiji dada (Chaudhary is popularly called by this name) ko samjahye ki narazgi chodiye, chunaav main lagiye, chunaav baad apka uchit samman hoga (Modiji asked Dada to forego his grievances and help in the elections after which he will be compensated), said seasoned RSS functionary Anand Sinha. Most of the RSS activists I talked to repeated this view. But who is Shaymdev Roy Chaudhary, and why did the prime minister need to personally talk to a mere MLA to get his grievances sorted out? The answer lies in the complex and unique politics of Benaras.

A Bengali by birth, Shyam Deo Roy Chaudhary is a seven-time MLA and ex-minister of the BJP. How could a Bengali win elections in a typical north Indian city like Varanasi? Because, for one, Varanasi has a sizeable number of Bengalis in the city. For a couple of centuries now, Bengali landlords and rich people have been making their homes in Varanasi which they already used to visit regularly either for pilgrimage, or to ‘change the hawa’ – a term widely used in late 19th and early 20th century Bangla and Hindi literature. Conventional wisdom of the time held that the dry wind of the ‘west’ was good for one’s health after years of living in the moisture laden environment and malaria infested areas of Bengal. So those who could afford it used to come to Varanasi for short stays. However, some never went back, thus increasing the Bangla speaking gentry of Benaras. Though the numbers have been declining for the last few decades – as houses and properties owned by Bengalis are being forcefully annexed by a few local strongmen – there are still a significant number of Bengalis in the city. One of them is veteran journalist Amitabh Bhattacharya, whose family of reputed musicians and scholars has been living here for the last 24 generations.

Also read: Is Modi’s Presence in Varanasi a Sign of BJP’s Desperation to Win UP?

Secondly, it was Dada’s accessibility and down to earth attitude that made him popular, not just at his seat, but also in the whole city. “Anyone could approach him for help, and we would come with you on your motor cycle or even cycle if there is no vehicle”, says Bunty Singh at the Assi Ghat. “He never earned money from politics, never bought SUVs or palatial houses. You would often spot him sipping tea like a commoner on a roadside stall, or getting his chappals repaired. People thought that he has gone beyond worldly temptations, and a city like Varanasi, famous for its Aghor traditions respects such figures,” said renowned writer and journalist Anil Yadav. Dada’s commitment to the people’s causes and his presence at all major movements and dharnas concerning his voters also earned him a number of supporters, even in the ranks of the opposition parties.

It is due to these reasons that the news of Dada being denied a ticket created a wave of popular resentment against the BJP on this seat. Adding insult to injury was the fact that the party did not discuss this move with Dada. The majority of BJP supporters vowed to work against the BJP candidate, Neelkanth Tiwary, wanting him to be defeated. Even chief minister Akhilesh Yadav mentioned this fact in one of his speeches.

Sensing trouble, the BJP and RSS machinery rushed to do damage control as the wave of opposition also started impacting BJP candidates on the adjoining urban seats. However, after BJP president Amit Shah and senior RSS office bearer Krishna Gopal failed to quell the popular anger by convincing Dada to be a part of the election campaign, Modi had to step in as a measure of last resort. Reportedly, Modi was not willing to take any chances in his own Lok Sabha constituency. “Dada is satisfied now, and the damage has been controlled, which will reflect in the results, you just wait till the polling day,” says a hopeful Sinha.

While the BJP’s functionaries are still hoping that the party is back on track in all of the district’s seats, the BJP’s path is still far from smooth in Varanasi, as there has always been a sizeable anti-BJP constituency in the district. A part of the city’s population opposes the BJP’s designs and some members have offered uniquely witty criticisms of Modi.

“They say they will make this a smart city, imagine, this city, an eternal city that never died”, said Bhattacharya during a quintessential Benaras teashop discussion, referring to Modi’s promises of turning Varanasi into a smart city. “It’s outrageous,” he continued, “as outrageous as asking an old, gracious lady to wear a bikini to be modern.” He paused amidst a roar of laughter from the listeners. “What good can be expected from such people, who know nothing of the glorious past and lively traditions of Benaras, where you can find speakers of all north and south Indian languages, Hindus and Muslims living in perfect harmony since generations”, Bhattacharya concluded. As some BJP sympathisers sitting nearby murmured their opposition to these statements, I left to file this report.