During the polling, BJP booth committees seemed to be working more efficiently than TMC booths. 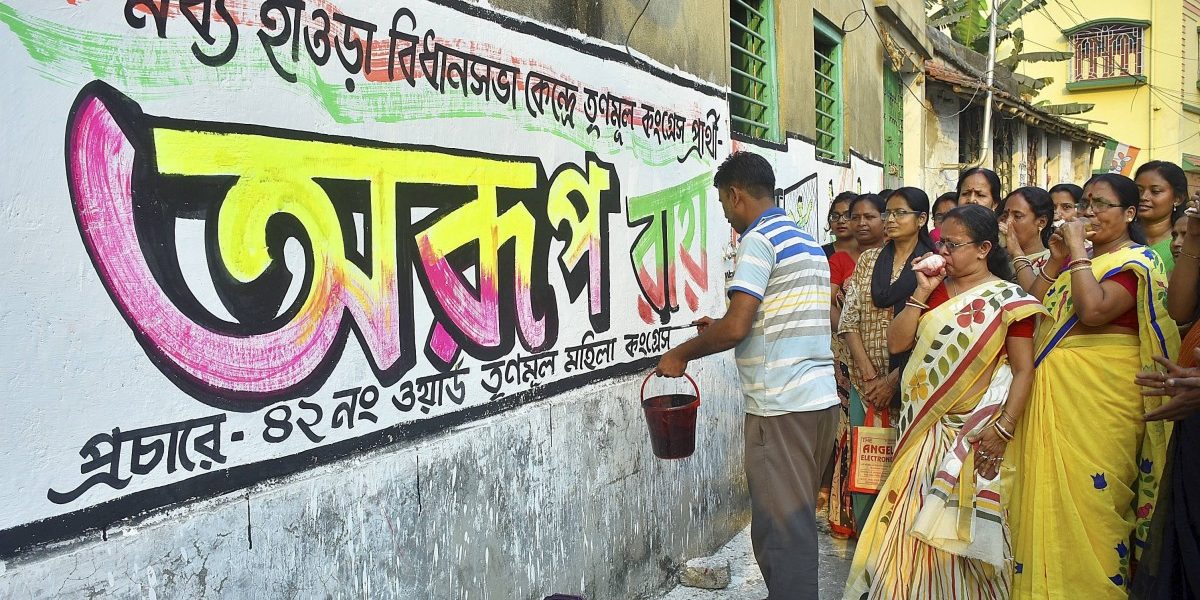 A TMC supporter paints a wall to campaign for the party ahead of Assembly polls, in Howrah, Friday, March 5, 2021. Photo: PTI

Jhargram: “Have you turned 18?”, I ask a group of youngsters coming out of a polling booth after voting in Salboni village of Gopiballavpur assembly constituency in West Bengal’s Jhargram district. They say ‘yes’, and tell me they are in college, but fail to give a convincing answer about which subjects and courses they are studying.

Their looks and responses indicated they were still not adults, but they all had valid voting cards that they displayed. On asking which party they voted for, they unhesitatingly said, “We have voted for poribortan,” a widely-used synonym for saying ‘BJP’.

Getting underage voters enrolled in the electoral rolls is not a new practice in India, it is in fact deeply entrenched in our political system. It wouldn’t have been surprising if the youngsters had declared themselves to be TMC supporters.

But the fact that the BJP has done so in the remote Jhargram district where a Maoist movement was thriving till a few years ago did come as a surprise as the party has been projected as “organisationally weak” in West Bengal. The ruling TMC accuses it of being a party of “outsiders” and recent incidents like home minister Amit Shah’s rally getting cancelled due to a lack of people and BJP giving tickets to people who are not even party members also give an impression that the party lacks organisation in the state.

How does one make sense of these contradictory facts?

“We lacked organisation in the state,” says Nitlotpal Hazra (name changed), a BJP booth level worker in Narayangarh assembly segment of West Medinipur district. “But panchayat elections gave us an opportunity as we were the only party that resisted TMC’s harmnad bahini (militia) and their attempts to suppress opposition then, even at the cost of damages and deaths. The benefit of those struggles were evident in Lok Sabha elections 2019 and we won 18 MPs. Since then, we dedicated all energy on organisation building. Our MPs and the central leadership backed us completely, and now we can say that we are even more entrenched in Bengal than the TMC,” he concludes.

What Hazra says gets validated during our visits to areas where the first and second phases of voting are taking place. Even in the remotest villages of districts falling in this phase, BJP flags and banners could be seen in full force, no less in number compared to the TMC – though the same could not be said about the Left-Congress-ISF (Indian Secular Front) alliance. And during the polling, we could see BJP booth committees working efficiently at all booths we visited. In most cases, BJP booths were more crowded than the TMC booths.

“Don’t ask us, ask common people. Even if you ask a small child he will tell you that there is a wave of poriborton,” said a group of youngsters near a BJP booth in Jhargram when we asked them who would win the election.

The confidence with which people also replied to our questions also indicates a significant new development of voters openly expressing their opinion, across districts. But why is this surprising?

“Because West Bengal is a ‘party-society’ state, where the ruling party keeps a tight grip over public spaces and resources,” says political analyst Sajjan Kumar. “During the left front days, the left cadres prevented people from expressing their anguish against the government and the palpable fear of political violence – for which the state is well known, discouraged the common people from doing so. Opposition voters were not allowed to cast their votes in a large number of places, through threats or through actual violence. The TMC inherited that culture, and till some months back when I was doing fieldwork, common people avoided criticising TMC openly, or saying that they want poriborton,” he says.

This observation is in contradiction to our experience as in most places – from Bankura to Jhargram to West Medinipur – we found common people not shying away from expressing their support for a change of government. Further, the level of political violence seen during the first phase of polling is also indicative of the fact that TMC cadres or local level managers at the booths did not prevent opposition voters from exercising their voting right, as expected by many. What explains this change?

“Local level leaders are at the forefront of all struggles and it is us who have to suffer most if political fortunes change,” said a TMC local leader on condition of anonymity, in Pingla assembly seat of West Medinipur. “We are sensing that a lot of people want change, despite the good work that TMC government has done and what can we do if they vote for BJP? Though we believe Didi is coming back, but what if BJP comes to power? Since we will be in firing line then, we are playing it a bit safe this time,” he admits.

In fact, this sentiment was echoed by a number of TMC local leaders who admitted that the energy and assertion their party displayed at booth level is “slightly” less this time.

“After all we have to live in the same village, we can’t leave our homes and go to the jungle if government changes,” concludes Das, while scrolling through news reports in his phone about phase 1 of polling that concluded minutes back.