Why Children in Dhanbad Villages Do Not Smile

High fluoride content in groundwater is crippling entire generations in several Dhanbad villages, which are full of unsmiling children ashamed of showing stained teeth, an early stage of the debilitating disease. 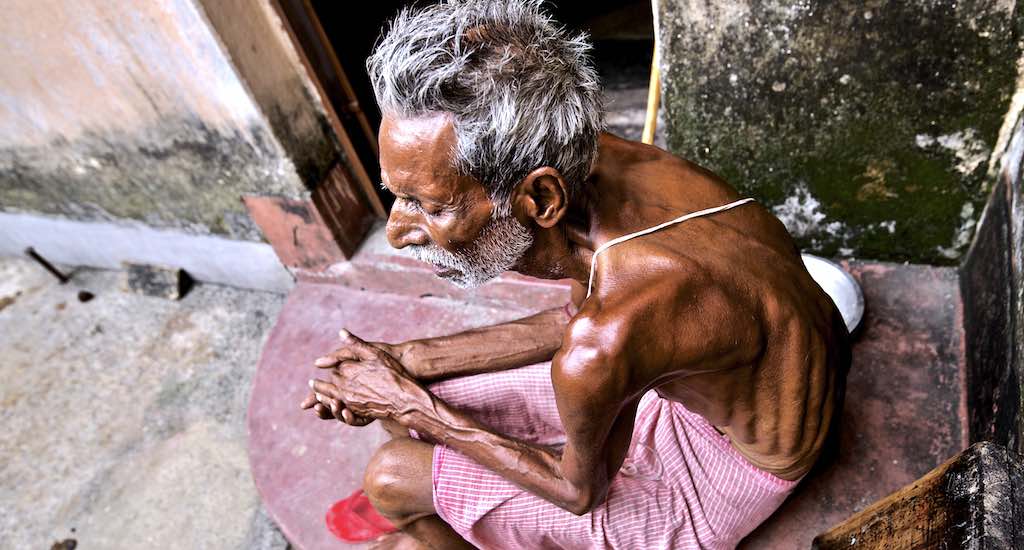 Sixty-eight-year-old Himanshu Chakrabarty of Brahman Tola village in Ghadbad panchayat of Dhanbad has only one desire – death. For more than 15 years, he is suffering from weak and deformed bones with almost no flesh on his body, limping around like a living skeleton. Patient of a crippling disease called fluorosis, which caused due to an excess intake of fluoride, Chakrabarty wants an end to his suffering. “I only want death,” he says, in pain. “How much more do I have to suffer?”

Chakrabarty isn’t the only one suffering in Brahman Tola. “Each of the 68 households in our hamlet has at least one patient suffering from fluorosis,” resident Rajit Thakur told VillageSquare.in. “Almost 60% men and over 75% women of the tola are affected by the disease in some form or the other.”

Fifty-year-old Savitri Mukherjee, a widow, lives alone and cannot walk with her spine straight. “It started with pain in my shoulders, back and knees. But, for the last five years, I am walking with a bent back,” said Savitri. “If I fall on the ground, I cannot get up on my own. I cannot sleep straight on the bed. It’s been five years since I have seen the sky (with back always bent downwards). There are several women like me.”

The common thread tying all the residents of Brahman Tola with a single disease – fluorosis – is their drinking water. “The groundwater of Brahman Tola and its neighboring villages in Ghadbad and Birsinghpur panchayats of Baliapur block is laced with high fluoride. Groundwater is the primary source of drinking water for these villages, which depend on hand pump and dug well to meet their daily water needs,” Eklavya Prasad, managing trustee of Megh Pyne Abhiyan (MPA), a non-profit working on water and sanitation issues, told VillageSquare.in.

Chakrabarty used to live in the Purulia district of West Bengal and moved to Brahman Tola in Dhanbad district of Jharkhand about 38 years ago. “Till about 20 years ago, we used to drink water from a dug well near the village school. Then hand pumps were sunk,” reminisced Bani, wife of Chakrabarty. “We were told that hand pump water was clean and pure, but within five years my husband started to complain of pain in the bones and joints.”

“The pain started from my right leg and slowly moved upward in my back. Then, my entire body was affected. Getting up from the bed and moving around has become a challenge,” said Chakrabarty, who has consulted doctors at Dhanbad and Asansol in West Bengal, all of whom have diagnosed him with fluorosis and prescribed painkillers. “Doctors claim that I got this disease from drinking water. So, I have only two choices – die without water, or die drinking poisonous water,” said an exasperated Chakrabarty.

“Fluorosis is a painful and crippling disease,” Manish Kumar, a radiologist in Dhanbad who often receives fluorosis patients, told VillageSquare.in. “High fluoride in the body starts depositing on the bones and as fluoride deposition increases in bones, calcium starts to decrease, making bones brittle.” This is not all. Bones and muscles are joined together through tendon. “Even tendon starts having calcification. Fluoride also deposits on intervertebral disc (which serves as the spine’s shock absorber), because of which patients experience severe back pain and cannot walk straight.”

How much is too much?

Fluoride is a micronutrient and is widely distributed in the earth’s crust, mainly as the minerals fluorspar, fluorapatite and cryolite. According to the World Health Organization (WHO), fluoride intake has both beneficial effects in reducing the incidence of dental caries, and negative effects in causing tooth enamel and skeletal fluorosis following prolonged exposure to high concentrations.

The dental effects of fluorosis develop much earlier than the skeletal effects in people exposed to large amounts of fluoride, says WHO. Clinical dental fluorosis is characterized by staining and pitting of the teeth. In more severe cases, all the enamel may be damaged.

The WHO has set the fluoride guideline value of 1.5 milligram per liter (mg/l) for drinking water, beyond which fluoride starts to show adverse human health effects. In India, the BIS drinking water standard for fluoride is divided into two parts — an acceptable limit of 1 mg/l, and a permissible limit of 1.5 mg/l in an absence of an alternate source.

But, the groundwater and drinking water supply in several regions of the country contains high fluoride levels. The Union Ministry of Health and Family Welfare has recently identified at least 132 districts in 19 states severely affected by high fluoride content in drinking water, a leading cause of fluorosis.

“The terms like acceptable and permissible limits do not make sense. It should be toxicity limit and down to 0.5 mg/l because, even at that level, fluoride can affect human health,” Sunderrajan Krishnan, director of Anand-based INREM Foundation, a research institution working on water, public health and agriculture, told VillageSquare.in. Krishnan has done extensive field-based research on impacts of fluoride on human health.

According to the residents of Brahman Tola, a couple of years ago, the Public Health Engineering Department (PHED) tested water quality of hand pumps in their village.

“The PHED officials painted some hand pumps red and told us not to drink water from them, as they contained high levels of fluoride. But, the government has not provided any alternate source of water. Hence, we drink contaminated water knowingly,” lamented Ashish Sarkhel, another resident suffering from skeletal fluorosis. “Initially, I had only back pain, but in the last seven years, my condition has worsened. I used to work in a factory, but had to give up my job.”

Last December, MPA carried out a survey of high-fluoride affected villages in Ghadbad, Birsinghpur and Machiyara panchayats of Baliapur administrative block in Dhanbad district. Water sources of Brahman Tola were tested as well. Children were screened for dental fluorosis at local schools.

“Using field-kits, we tested water quality of 11 villages and hamlets in the three panchayats. A total of 45 dug well samples and 78 hand pump samples were tested. Of these, only six samples of dug wells and three samples of hand pumps were found safe for drinking. The rest had fluoride levels above the permissible limit,” Pradeep Poddar, program officer at MPA told VillageSquare.in.

The situation is so grim in Brahman Tola that its children refuse to smile. They fear their smile will expose their stained teeth (dental fluorosis) to visitors. “More than 90% of the children in the tola have stained teeth. No child above the age of six or seven years has clean white teeth,” said Thakur. “Our entire younger generation has been blotted.”

“I used to have clean, white teeth. But, for the last three-four years, my teeth have developed brown stains. Elders tell me that it is due to the water I drink. My friends also have stained teeth,” said Debu Sarkhel, a nine-year-old who studies in the 6th standard of the local middle school.

All the children in the middle school – Utkramit Madhya Vidyalaya, Ghadbad – which is till the 8th standard, drink water supplied from a 400-feet deep tube well within the school premises. “Earlier, the school hand pump was only 150 ft deep. Last year, as part of a drinking water scheme for the school, the hand pump was dug deeper to 400 ft,” Thakur said. “We fear that even at 400 ft depth, fluoride is present in the groundwater.”

“I cannot bear to see my husband suffer every minute. So, I buy 20-liter bottled water for Rs 20. Both my husband and my son drink that water. I continue to drink the hand pump water,” Bani, wife of Chakrabarty, told VillageSquare.in. 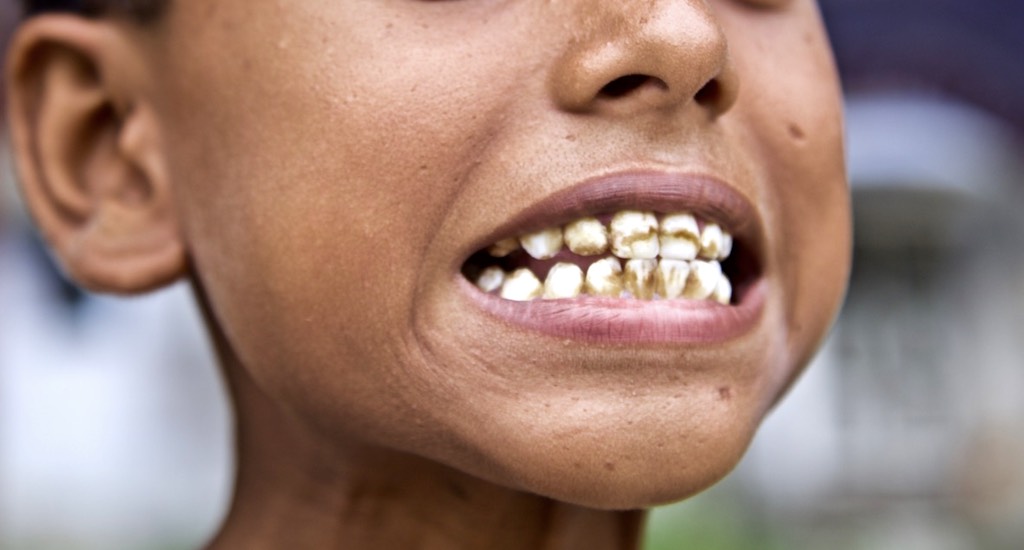 It is hard to find a child above 6-7 years age in Brahman Tola who does not have strained teeth due to dental fluorosis. Most children cannot touch their toes, which is a sign of early stage of skeletal fluorosis. Credit: Eklavya Prasad

The condition of 60-year-old Gita Chatterjee, a widow, is worse. She lives alone and can barely walk a few steps. “I have to beg and request village youth to fetch me some drinking water,” said a hapless Gita. According to Thakur, only 10-12 families in Brahman Tola have the money to buy 20-litre jar of drinking water. “Fluorosis has crippled us and we cannot earn a living. Buying bottled water is an additional cost,” he lamented.

The state government and the district administration are aware of the sufferings of people in the fluoride-affected panchayats. Three years ago, Rs 7 million worth of drinking water treatment and supply scheme for the affected villages, including Brahman Tola, received technical sanction from the state government.

As per the scheme, water of Damodar River is to be treated and supplied to the villages through piped water supply. Villagers have to pay a user fee to the village water sanitation committee. But, the scheme hasn’t made much progress.

“The work is already underway. It was expected to be completed by November, but there has been some delay. The scheme should be functional by March next year,” Kuldeep Chaudhary, deputy development commissioner of Dhanbad, told VillageSquare.in.

According to him, the Dhanbad Mineral Fund Trust (DMFT), which is based on royalty received from mining companies in the district, is highest in the country, somewhere between Rs 50-60 million. “Sanitation, water and environment are the priority areas where we want to spend the trust fund. We can use money from this fund to support the villagers suffering from fluorosis,” added Chaudhary.

The people of Brahman Tola and the surrounding villages have suffered enough in the past few decades. An entire young generation is at the risk of being crippled for life. The government must act on a war footing and supply safe drinking water to the people.

Nidhi Jamwal is a journalist based in Mumbai.