Why Biden Brought Up Gandhi In His Meeting With Modi

The US president is pointing to the danger to democracy in India from Hindutva, just as the white supremacism of the Trump era was a threat to the US. 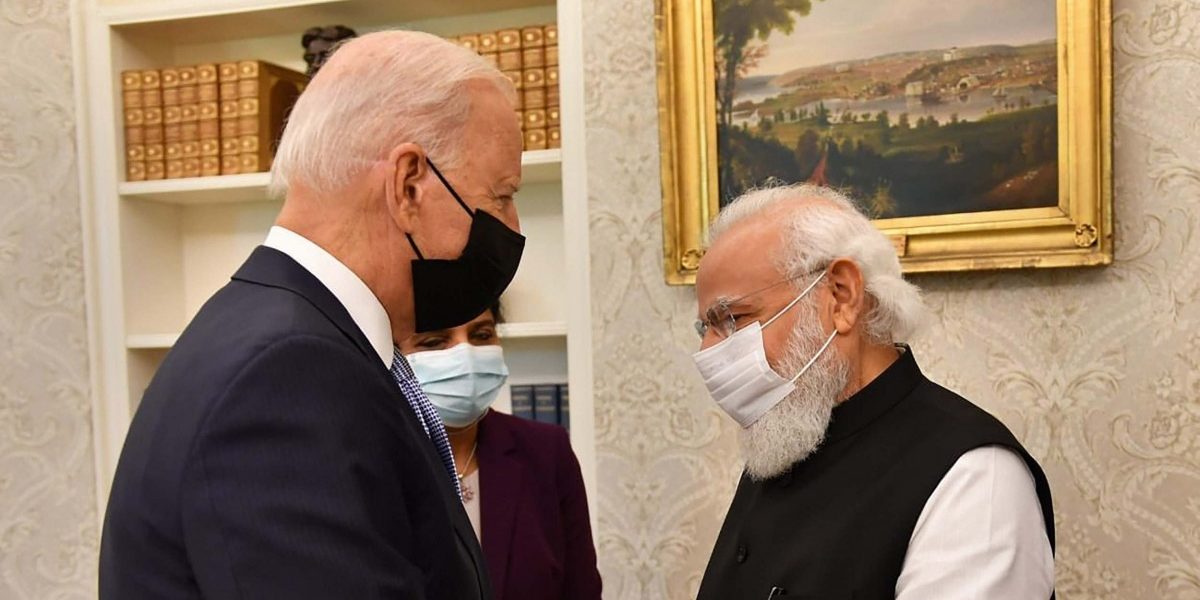 A major takeaway from the meeting between Joe Biden and Prime Minister Narendra Modi at the White House last week was that the president of the United States saw fit to remind India’s Hindutva leader about the relevance of Gandhi and Gandhism.

Biden didn’t just recall Gandhi – killed on January 30, 1948 by Nathuram Godse, a Hindutva Brahmin from Maharashtra – in the abstract. The US president made it a point to tell the world – and Modi, who was seated next to him – that the Mahatma’s “message of non-violence, respect, tolerance matters today maybe more than it ever has”.

The US president’s words highlight the fact that his government is not happy with the human rights situation in India under Hindutva rule.

Donald Trump, who, as US president, shared many values of Hindutva politics, would never have quoted Gandhi to preach tolerance, non-violence and respect. Perhaps the only time he invoked Gandhi in public was when he put out a fake quote. “First they ignore you. Then they laugh at you, then they fight you, then you win,” Trump had tweeted in 2016. When he visited the Sabarmati Ashram in Ahmedabad in February 2020, he thanked Modi and forgot to mention Gandhi’s name. And later, even as Delhi was convulsed by anti-Muslim violence, the Washington Post noted that he praised “Modi’s record on religious tolerance”.

So now, for President Biden to signal to the world – in Modi’s presence – that his government is not following the principle of tolerance and non-violence is definitely a shocker to the RSS/BJP back home. Though Modi keeps quoting Gandhi – and not Savarkar or Golwalkar – in international forums, the US president’s reference to Gandhi was a diplomatic way of telling his visitor that India has become an intolerant country on many counts. Biden knows what he is talking about. After all, the Democratic Party fought Trump’s intolerance and white supremacism in an open confrontation, during the 2020 election and thereafter on January 6, 2021 at the Capitol Hill.

Also read: The Truth of the Ill-Defined Hindu Rashtra, as Narrated by Golwalkar

The Biden administration has a large team of Indian origin personnel, including Vice-President Kamala Harris herself. The Biden team knows how to communicate to the Hindutva fold back home and to its supporters in the diaspora.

In recent weeks, there was a global discussion on the nature and character of Global Hindutva, including the American Hindutva groups, which are by and large not only anti-Muslim, anti-Ambedkarite and anti-reservation but also anti-Gandhian. Their pet heroes are Savarkar, Hedgewar, Golwalkar and Godse.

Modi himself is facing some opposition from anti-Gandhians within his Hindutva school, ever since he started trying to invoke Gandhi’s name. Some of them keep insisting that Nathuram Godse was a better nationalist than Gandhi, the most recent one being Pragya Singh Thakur. Modi and Amit Shah themselves gave her a ticket and saw to it that she comes into parliament, so they cannot now complain about her utterances.

Gandhi was killed not just because he stood for an inclusive democracy in which Muslims would be equal citizens. He was engaging with Ambedkar on caste and untouchability reform issues. No other leader in the Indian National Congress, especially the Maharashtra Brahmin leaders, were in favour of this. Bal Gangandhar Tilak himself was opposed to Mahatma Phule’s reforms. His son, Shridhar Balwant Tilak, took his own life in despair after being harassed for supporting Ambedkar’s reform agenda.

Gandhi was seriously sympathetic to the abolition of untouchability and reforms in Hinduism, if not for abolition of the varna system. This was not liked by the Maharashtra Brahmin leadership of the time. Hence there were many attempts on his life earlier to the final act of killing him in 1948.

Savarkar and his followers set out a theory of Hindutva which was different from that of Bengali Brahmin leaders and thinkers like Rajaram Mohan Roy and Rabindranath Tagore. The same Maharashtra Brahmin school which opposed Gandhi started the Rashtriya Swayamsevak Sangh. Hedgewar, Golwalkar and Madhukar Dattatraya Deoras led that organisation with a Hindutva-Brahmin supremacist ideology. They were all strong anti-Gandhians. Mohan Bhagwat is cut from the same cloth.

Serious democrats in the US saw a threat to their own democracy from the Trump school of white supremacism. During his rule, the Black Lives Matter movement shook the West. So also serious democrats in India and the world over see a threat to democracy in India from Hindutva supremacism. This is where US Vice-President Kamala Harris’s worry about the survival of democracy in both countries in her joint statement with Modi makes global sense. She said:

This is a strong warning from Washington about the impending danger to democracy in India from Hindutva, just as the white supremacism of the Trump era was a threat to the US.

Narendra Modi, who has been shaped by the Hindutva worldview since a young age, climbed the political ladder and moved up to prime minister’s position in 2014. As a Gujarati, he may not have as pronounced an anti-Gandhi streak as others in his fold, but he cannot repudiate his RSS legacy. The Biden team, especially those of Indian origin, knows this.

By invoking Gandhi’s emphasis on respect, tolerance and non-violence, the US president is gently reminding the world about the series of anti-Gandhian shifts that have occurred on Modi’s watch since 2014: minority marginalisation, the targeting of globally respected NGOs that were working to provide humanitarian aid to the poor – mainly Dalits, Adivasis and OBCs, the violation of basic human rights by lynchings, the targeting of Muslims using the so-called ‘love jihad’ laws, ‘ghar wapsi‘ and anti-beef campaigns and so on. All of these have undercut the plural democratic fabric of India.

Also read: Democracy Is Failing in India and the World Over. But the Answers to Save It Lie Within

During Trump’s tenure as US president, the Hindutva forces in India were emboldened because there was tacit support for their actions from that regime.

The COVID-19 pandemic has also taken its toll on right-wing politics. The world appears more receptive to liberalism and human rights. The RSS and BJP will find it difficult to navigate their agenda in this world. Leaders who promise equal opportunities and respect for all in every sphere is what people are looking for. With any luck, a political, social and intellectual atmosphere will be created for human equality and dignity. Neither Modi the individual nor his party/organisation, the BJP-RSS, have adjusted themselves to this post-Trump, post-COVID-19 pivot in the US and the world.