Two people have been arrested so far after mobs turned violent on believing rumours about child lifters. 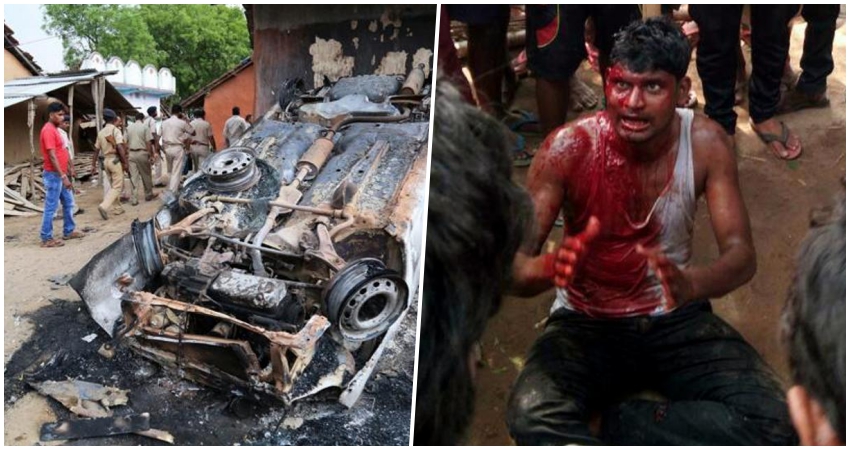 A charred vehicle that was torched by angry people during a violent protest and of the victims of the lynching who was killed. Credit: PTI Photo

Jharkhand: A circulating Whatsapp message warning against child kidnappers has caused widespread panic in Jharkhand, leading to villagers turning violent and resulting in the lynching of seven men on Thursday, May 18. According to an Indian Express report, the rumours of child lifters had already been circulating for a month, along with pictures of dead children, and the WhatAapp message in question exacerbated the situation, leading to Thursday’s violence.

The message, written in Hindi, said, “Suspected child lifters are carrying sedatives, injections, spray, cotton and small towels. They speak Hindi, Bangla and Malyali. If you happen to see any stranger near your house immediately inform local police as he could be a member of the child lifting gang,”. Many villagers in Seraikela-Kharsawan, East Singhbhum and West Singhbhum districts believed what they saw on their phones without question and responded by picking up weapons and attacking any strangers they saw, reported Hindustan Times.

The fallout of this message was a string of lynchings in Jharkhand, with four men, a group of cattle traders passing through Sobhapur village, beaten to death. Three more youths fell prey to mob violence in Bagbera on the same evening. Photos and videos of the violent deaths of these men have gone viral, prompting protests and clashes between angry mobs and policemen in multiple localities in Jamshedpur. Hindustan Times reported that East Singhbhum rural SP, Shailendra Burnwal, announced that they were considering shutting down social media for a couple of days till the rumours died down.

The victims’ families have forwarded the videos to the police and a complaint naming 16 persons has also been submitted. The videos of the mob violence show many of the faces of those involved, making arrests easy. Many of the tribals who participated in the lynchings are now absconding, as the police begin to make arrests in the case, reported The Indian Express. The family of one of the victims in the Sobhapur incident has also refused the Rs 2 lakh compensation offered and is instead demanded justice, according to Hindustan Times.

On Monday, two persons were arrested in connection with the Sobhapur incident – Dharnidhar Jyotishi and Dinesh Mahato alias Tudu Mahato, both of who were accused in relation to the lynchings. However, despite police action, protests continue to take place in Jharkhand, sometimes turning violent, leading to the imposition of Section 144 of the Criminal Penal Code in Mango and three other police station areas in Jamshedpur, lasting from Saturday to Sunday. In some affected areas where the situation is tense, the Rapid Action Force has also been deployed.