India needs political leaders who can make people understand and accept that even if Hinduism is the dominant religion, men and women cannot be killed because what they write or what they eat offends Hindus. 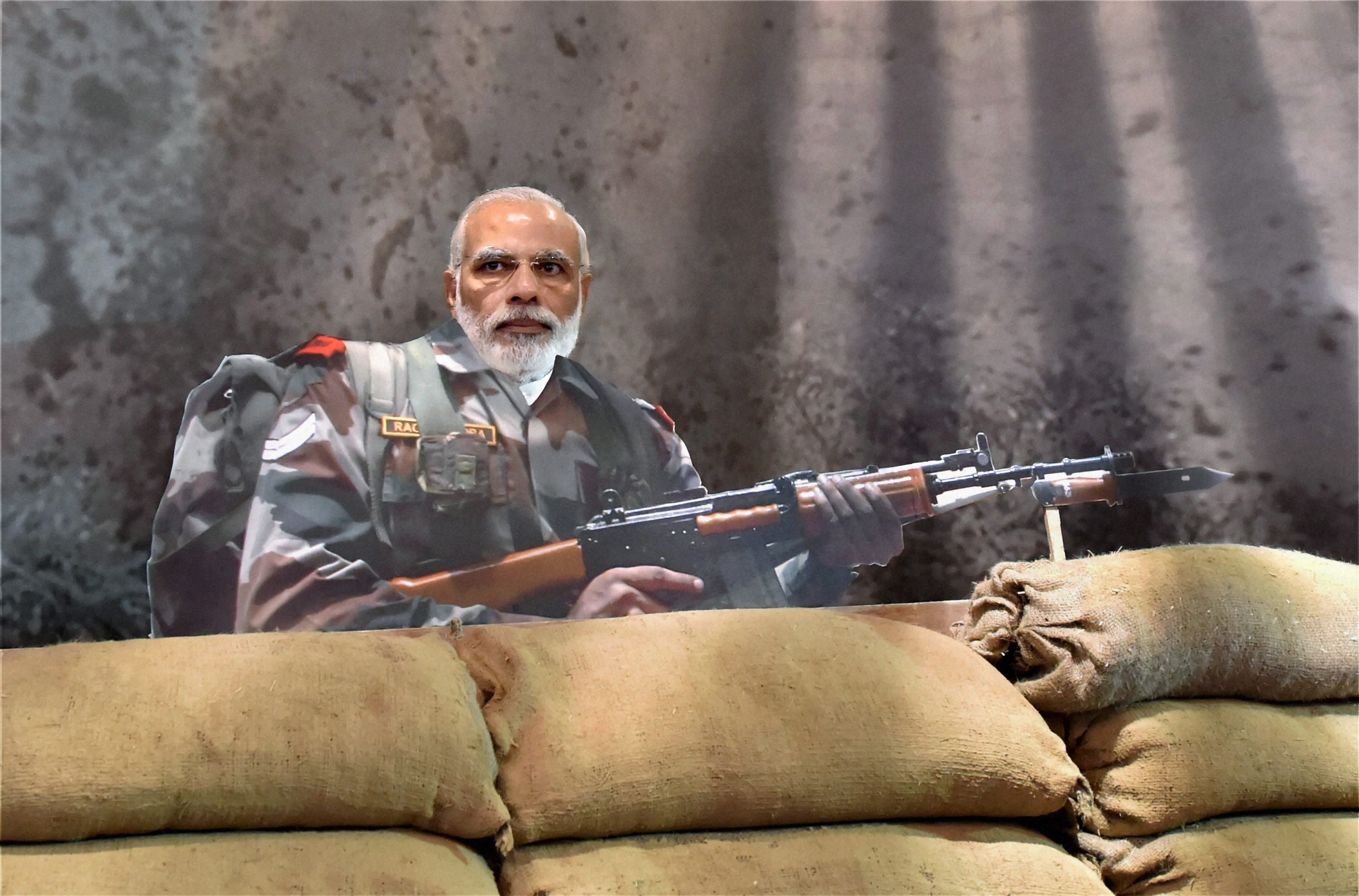 The Prime Minister has spoken at last, to say that the Central government had nothing to do with the lynching of a man and the maiming of his son in Uttar Pradesh, or with the attempts to stop public events in Mumbai featuring Pakistanis, sad and needless as these were.

What he said was also sad and needless.

After the murders of free-thinkers and writers in Dharwad, Kolhapur and Pune, after the horror of Dadri, that a man should be turned into Kali in Mumbai seems almost an act of homage from those who claim to be her consort’s sainiks. In trying to keep eminent Pakistanis out of Mumbai, the Shiv Sena was being its usual unspeakable self, but its toxic jingoism was not murderous. It cannot be equated with the killings. One was a national embarrassment, the others were national tragedies. The Prime Minister knows the difference; he chooses not to see it.

As President Obama has done every time there has been a massacre in the United States, we expected our Prime Minister to denounce the killings immediately, to lead the mourning for the dead, to console the bereaved, to seek expiation on behalf of the nation and to demand that these outrages stop. He did not do any of these things. Instead, tardy and combative, he has now claimed “pseudo-secularism” was politicising issues to polarise opinions and communities.

Needed, a little bit of politicisation

Contrast that with what President Obama said after the latest shooting spree in the US. “Somebody, somewhere will comment and say, ‘Obama politicised this issue.’ Well, [mass shootings] is something we should politicise.” In the same way, Indians have to be mobilised, by political leaders more than anyone else, to understand and accept that, though Hinduism is the dominant religion here, men and women cannot be killed because what they write or what they eat offends Hindus.

Are the anger, introspection and condemnation we see and hear in the Anglophone media as ubiquitous in the vernacular media? Do the villages and mofussil towns of India also feel Dadri was a tipping point? Are these issues of interest even in the state capitals, or is this simply one more instance of the solipsism of the NCR – believing that Lutyens’ Delhi and its environs enfold the country? A quick trawl through the Hindi and Bengali channels on the evening of October 14 showed that almost none had much interest in what the Prime Minister had said. Even the website of the Bengali newspaper to which he gave the interview did not have it as a featured item. It is because abominations like Dadri do not matter in India that they need to be agitated and politicised.

President Pranab Mukherjee said the other day that “our civilisation has celebrated diversity, plurality and promoted and advocated tolerance”, but these are not Hindu values. Ahimsa is a Buddhist and a Jain value, ignored by the rest of India until Mahatma Gandhi resurrected it; it died again with him. Hinduism has never accepted diversity, or other faiths and cultures. Resurgent, it stamped Buddhism out so completely that it was forgotten in the land of its birth, and drove Jainism, once almost as widely spread, into the western corner of India.

The syncretic culture liberal India celebrates is almost entirely the gift of the Muslim rulers of India. They translated Sanskrit literature, and absorbed its styles and stories; there was no corresponding interest in Persian, Arabic or Turkish literature among the Hindus.  Urdu was the Muslim contribution, in an attempt to meet their Hindu subjects half-way, developing a hybrid which is now one of the jewels in India’s linguistic crown.  The glories of Hindustani classical music developed from a fusion of Afghan and Persian styles and instruments with Hindu systems, under the patronage of Muslim nawabs, as did Kathak in the form it is danced now, as a mutation from a temple dance to secular entertainment.  In architecture, the Indo-Saracenic style was a Muslim marriage of Central Asian idioms with local forms. The magnificence of Nawabi and Mughal cuisine developed as Muslim bawarchis refined beyond recognition, and made complex beyond the dreams of their Central Asian forbears, dishes still cooked in their primitive forms from Afghanistan to Turkmenistan; they did it by incorporating local spices and techniques used by the Hindus. All this was despite Hinduism, not because of it. As Al-Beruni and many other visitors noted, Hindus were reluctant to share their knowledge or to imbibe the culture of others.

So we take the easy way out if we blame what is happening now on the lunatic fringe in the Sangh Parivar. The canker runs much deeper. Over a century back, Swami Vivekananda, now an icon of muscular Hindutva, received a deputation which asked him to call for a ban on cow slaughter. When he asked why they wanted the ban, his visitors said, “Because the cow is our mother”, to which the Swami replied, “That I can very well see.” It’s a pity that those who came after him were far more indulgent of foolish zealotry.

The killing and eating of cows have become intensely political matters because Hindus made them so, starting with the absurd provisions inserted in the Directive Principles of the Constitution. Mahatma Gandhi opposed this then, but he had said earlier

“I hold that the question of cow-slaughter is of great moment – in certain respects of even greater moment – than that of Swaraj. Cow-slaughter and manslaughter are, in my opinion, two sides of the same coin.”

What he meant of course was that neither was acceptable to him, but for lesser men, this established an equivalence between the life of a man and that of a cow. As Dadri showed, it follows from this logic that if one is taken, or rumoured to be taken, the other can be too. And if cow-slaughter was of greater moment than Swaraj, it will swamp vikas too.

It is unfair to blame the Mahatma, but everything that is Indian in the Constitution, good or bad, has its roots in his ideas. Most of it was drafted by Anglophone, Western-educated Indians, who ensured, for instance, that his crusade for the protection of dalits, adivasis and minorities, itself influenced by the Mahatma’s exposure to liberal Western thought, which they shared, would now become constitutional obligations for the state. Almost the only initiative of the Hindi-speaking members from the heartland was the demand for a ban on cow-slaughter, and they invoked the Mahatma in the Constituent Assembly, long after his death, though he himself had abandoned the demand and come out against such a ban.  They dressed up religious bias as economic necessity to smuggle it into a secular Constitution. Members of the Congress, not the RSS, perpetrated this fraud on the Constitution.

As a Muslim member from UP reminded his colleagues in 1948, Muslims had always sacrificed cows on Bakr-Id, but the year before, which meant the first Id after independence, “the consequence has been the arrests of many, molestation of even more, and imprisonment of some.” Which means that, as soon as Hindus came to power, even though under the secular aegis of the Congress, their prejudices prevailed. It is not surprising that 70 years on, with a government that does not need, and indeed loathes, a secular mask, Hindus can give full play to bigotry. Molestation has progressed to murder.

Hanging in the balance

No institution in India has done more to establish the idea of India, to enlarge freedoms, to protect diversity and to defend the weak than the Supreme Court, whose judgments are often cited in courts abroad for the scope of their definition of human rights. But over the last decade, in several judgments where the religious sentiments of the majority are involved, the court has not been true to itself. The judgment in which it struck down the ruling of the Delhi High Court on LGBT rights is one such example. On cow slaughter, where earlier judgments had held that a complete ban was not constitutional, and cattle no longer productive could be killed for their meat, it ruled in 2005, in State Of Gujarat vs Mirzapur Moti Kureshi Kassab that a complete ban was legal, rehearsing arguments first heard in the Constituent Assembly (where they were demolished by Frank Antony), and holding that the cow continued to be useful till it died because, in its words:

“the value of dung is much more than even the famous “Kohinoor” diamond. An old bullock gives 5 tonnes of dung and 343 pounds of urine in a year which can help in the manufacture of 20 carts load of composed manure. This would be sufficient for manure need of 4 acres of land for crop production. The right to life is a fundamental right and it can be basically protected only with proper food and feeding and cheap and nutritious food grains required for feeding can be grown with the help of dung. Thus the most fundamental thing to the fundamental right of living for the human being is bovine dung”.

Enough said. If any Hindu organisation challenges the Swachh Bharat campaign in the courts on the grounds that open defecation is an ancient Indian custom, this is an argument it could cite. Cow dung and human dung are two sides of the same coin. The point though is that well before this government took office, conservative Hinduism had come to believe that its demands and practices, even where they violated, denied or circumscribed the rights of the minority, were lawful. From there, it is a short step for a few to take the law into their own hands.

If history and mythology are guides, reaction trumps reform in Hinduism. The myth of Satyavrata is a cautionary tale. As a virtuous prince, he should have gone to heaven, but was cursed by Vasishta for killing and eating his cow. The compromise between the gods and the sage turned Satyavrata into Trishanku, suspended between heaven and earth, upside down among the stars. Satyavrata was the first victim of cow slaughter, Mohammed Akhlaq the latest. He will not be the last. But today, it’s India that is Trishanku.