What Lies Behind 50 IITians Forming a New 'Bahujan Start-Up'?

A close look at the political antecedents of one of the founders of BAP shows multiple connections with individuals connected to the BJP and Sangh parivar. 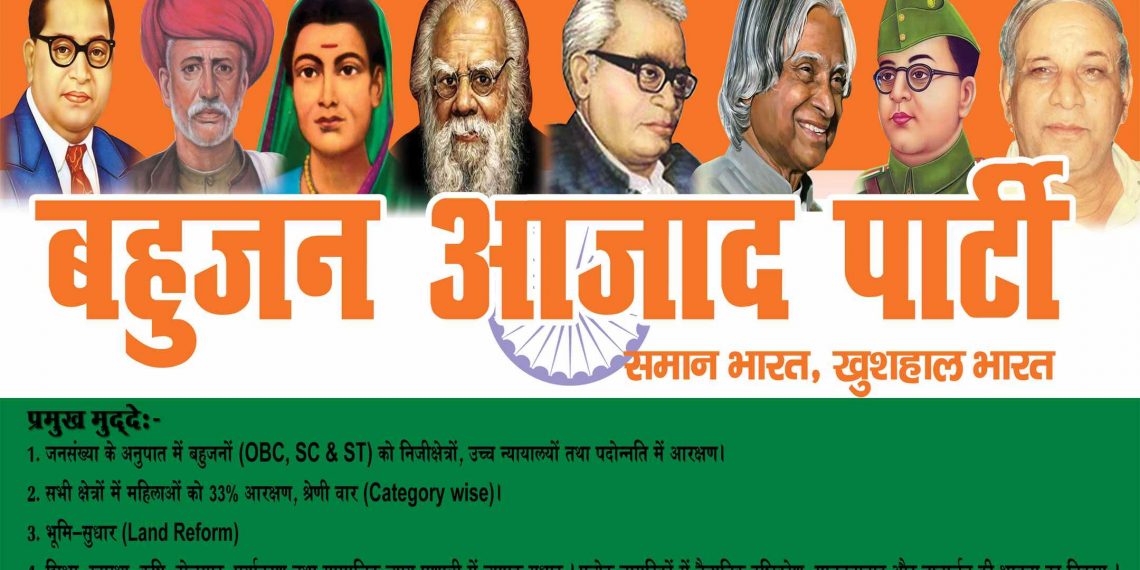 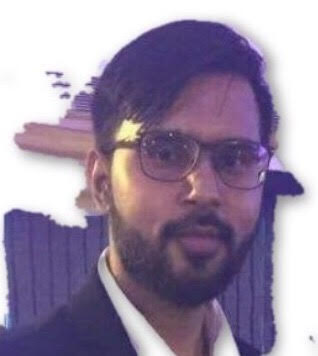 As caste calculations and the stitching up of possible political alliances gather pace ahead of the Lok Sabha polls next year, a new “political startup” has emerged on the horizon of Bahujan politics. Called the Bahujan Azad Party (BAP), this initiative has been kicked off by 50 Indian Institute of Technology alumni, all said to be from the Scheduled Caste/Scheduled Tribe and OBC communities .

That 50 young people from the most oppressed sections of Indian society have resolved to come together and quit their jobs to enter politics and fight for the rights of their people in such dark times should be cause for celebration. With declared aims like reservation in the private sector and higher judiciary in proportion to the population of Bahujans, 33% reservation for women (with categorisation) across all sectors, land reforms and focus on the social sector with reforms in delivery mechanisms of social justice, these young IITians articulate some of the most commonly voiced demands of the Bahujan movement.

However, any political movement or party must be looked at the through the lens of ideology and leadership, and it is here that some disconcerting questions arise, especially regarding the political origins of some of the people involved.

Consider, for instance, one of the founders of BAP, Vikrant Vatsal. His association with certain organisations ad his presence at events which seem to have been organised by the Rashtriya Swayamsevak Sangh (RSS), as seen in a picture posted by him on social media, raise questions about his political affiliations. 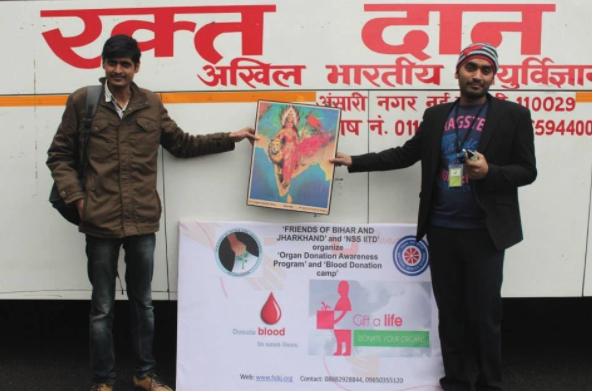 Vikrant Vatsal (left) at a blood donation camp where he’s holding a picture of the RSS’s conceptualisation of ‘Bharat Mata’, distinguished by a saffron flag held by the “deity” instead of the national tricolour. The picture is dated January 20, 2014. Credit: Twitter

What is more interesting is that Vatsal claims to have been a member of the Aurai (Muzaffarpur, Bihar) unit of the Aam Aadmi Party (AAP) from December 2013 until now, along with one Shardanand Giri and Amit Singh. The news clip clearly mentions Shardanand Giri as AAP secretary. In the other picture, dated December 29, 2013 Vikrant Vatsal (left of the speaker), seated along with Giri (blue striped sweater), are seen in an AAP protest.

Giri routinely shares RSS propaganda on his Twitter link despite being (or once being) a member of the AAP. The post below is against the Rashtriya Janata Dal, Lalu Prasad’s party in Bihar. And the Bihar elections in 2020 have been declared the first elections which the BAP would contest. So is the BAP, claiming to represent the Bahujans, contest against the RSS’s chief adversary in Bihar and someone who also styles himself as a stalwart of the Bahujan samaj? 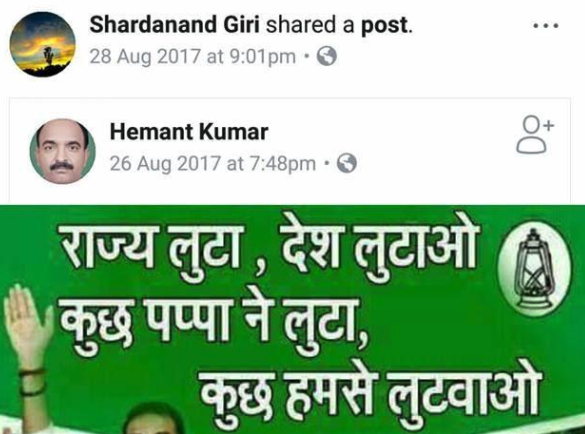 While their ideological underpinnings seem suspect, Vatsal and Singh protested on December 3, 2013, against chief minister Nitish Kumar at Delhi’s Jantar Mantar for turning Bihar into a haven for “terrorists”. At that time, Nitish had parted ways with the BJP and the AAP was warming up to him. So, if Vatsal wasn’t part of the AAP on December 3 2013, on whose behalf were he and Singh protesting?

It turns out that the Jantar Mantar protest was held on behalf of an organisation called Youth Democratic Front (YDF). Browsing through their Facebook page (notice the distinctive saffron torches as part of its emblem), it is evident that this organisation is against the AAP and Congress, and also against reservations of any kind, while appearing to maintain a pretence of neutrality.

A post dated March 28 reveals that Anubhav Dwivedi was the “Mahasachiv” of YDF. 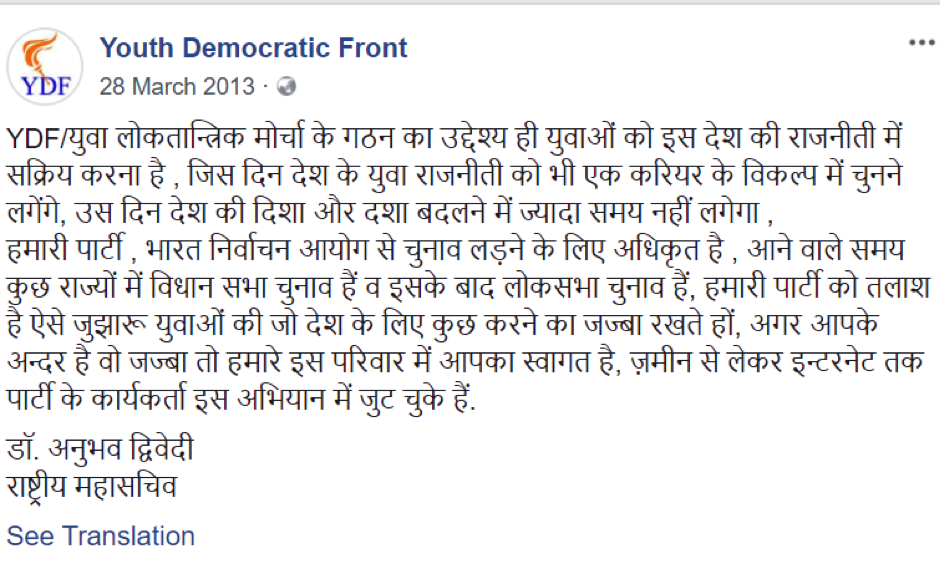 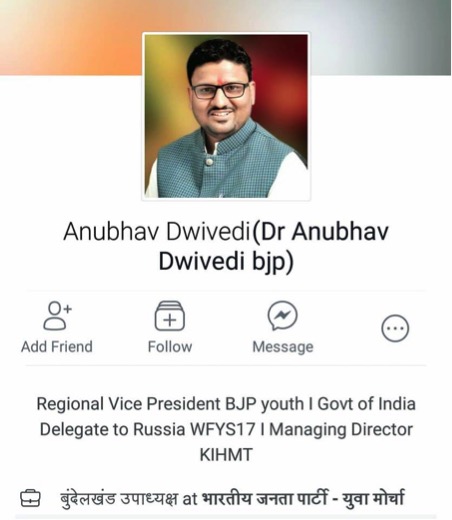 Another  post dated September 14, 2012 reveals that the vice president and general secretary of  YDF is one Suyash Deep Rai, whose Twitter handle @suyashdeep says he is “proud to be followed by the PM”. He is a contributor to Opindia (a Right-wing website). That Vatsal and Singh were members of a “youth organisation” whose general secretary is now a de facto part of the BJP’s IT cell definitely raises troubling questions. 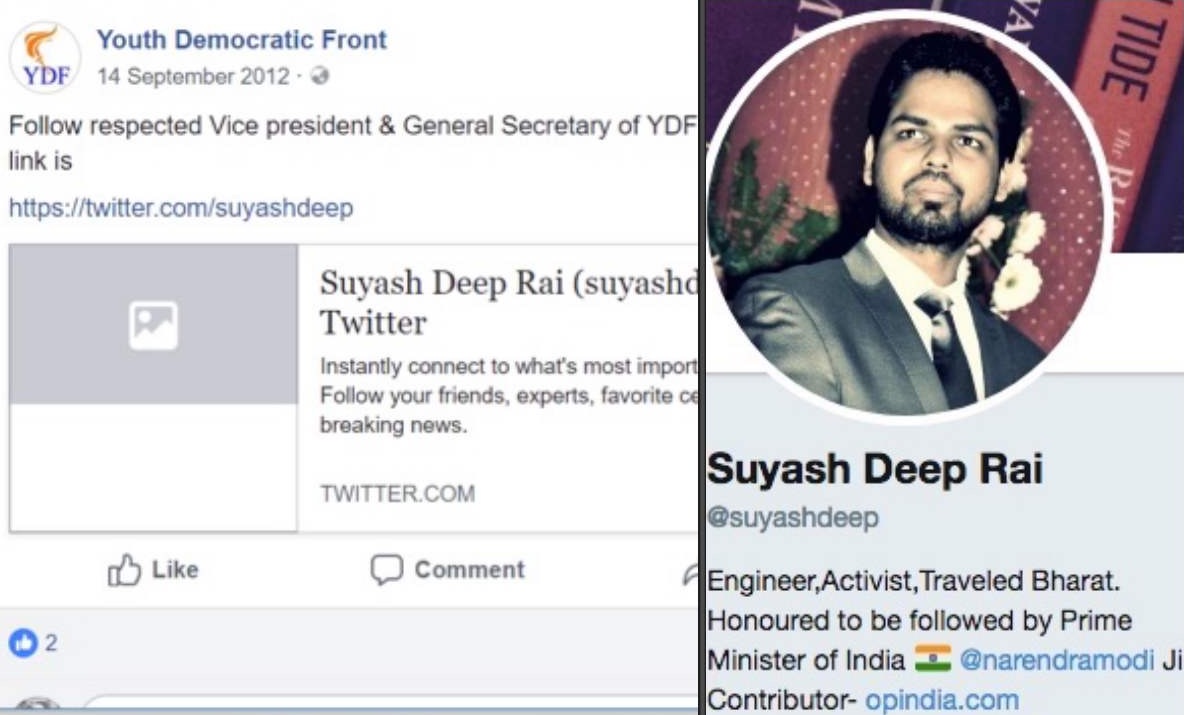 Suyash Deep Rai, described by the Youth Democratic Front as its vice president and general secretary says on his Twitter handle that he is “honoured to be followed by Prime Minister of India” and is a contributor to Opindia.

Vikrant Vatsal and Suyash Deep Rai did know each other is can be ascertained from this pic of a meeting of YDF which is posted below. 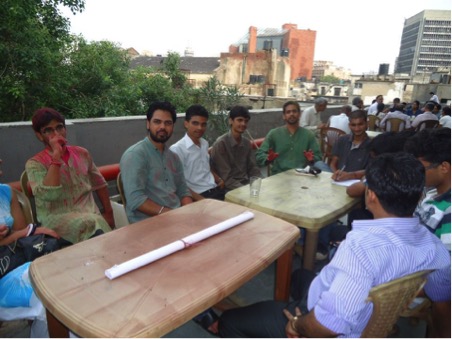 That Vikrant Vatsal was a member of a “Youth Organisation” whose “Mahasachiv” and general secretary are now both with the BJP certainly raises troubling questions.

Having established YDF’s connections with BJP,  we go on to the message that Vatsal wants to convey in another picture on his wall, dated December 2013. (Apparently before joining AAP). ‘Dismiss Nitish Kumar, who has turned Bihar into a refuge for terrorists’, the sign says. Who is he calling “terrorists”? Is it an oblique reference to the RSS’s line of attack on leaders whom it deems “secular” and accuses them of “Muslim appeasement”? BJP president Amit Shah had used the same line of attack against Nitish Kumar during the Bihar elections of 2015. 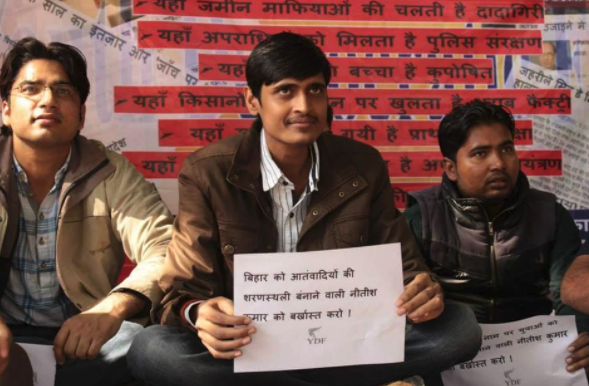 It is also pertinent to note that the BAP is more or less silent on where it stands with India’s Muslims, whose socio-economic conditions are rapidly deteriorating, falling behind even Dalits on certain parameters. There is just a cursory mention of the Sachar Committee report in their recently released manifesto. Does the BAP not look at Muslims as their constituents when the Bahujan movement is talking about Bahujan-Muslim unity? Vatsal at a protest in Jantar Mantar in 2013 against Nitish Kumar’s government. To his right is Amit Singh, his partner in the coaching institute and owner of a hospital. Credit: Social media

The man to the left of Vikrant Vatsal is Amit Singh, a very close friend of his. Apart from being a stakeholder in Vatsal’s coaching institute, he also owns a hospital in Delhi by name of Nestiva. A third branch of this hospital was inaugurated by BJP vice president and former Rajya Sabha member C.P. Thakur. So, not only was the founder of BAP, Vatsal, a member of an organisation run by Suyash Deep Rai who is now part of the BJP’s online propaganda machinery, he also attended events organised by the RSS. Those associated professionally and personally with him like Singh and Giri also have RSS/BJP connections.

One would expect any political party claiming to represent SCs, STs and OBCs to be Ambedkarite in its outlook or at least to inculcate some strands of Ambedkarite thought.  Vatsal, who sports a picture of Babasaheb as his profile pic on social media, says that he runs a coaching institute by the name of Radiant Academy of Sciences in Delhi, along with Amit Singh.

But there are some more give-aways in Vatsal’s social media profile that need answers. For instance, any true Ambedkarite is expected to be free of Brahminism and Brahminical rituals. But going by the pictures posted by him on social media, Vatsal seems to have great faith in rituals, as is evidenced by his performing a hawan in full Brahminical regalia when his institute commenced operations on October 7, 2014. Even if one dismisses the hawan as a matter of faith and an individual’s personal affair, what is alarming is Vatsal’s presence at certain events which seemed to have been organised by the RSS, such as the blood donation camp.

What, then, is one to make of Vatsal, and through him, of the newly minted Bahujan Azad Party? To answer that question, we need to consider the political context in which it has emerged,

At a time when the ruling BJP, under the trio of Narendra Modi, Amit Shah and Yogi Adityanath, has embarked on a path of aggressive, though, selective appropriation of Ambedkar, there has been a simultaneous rise in caste violence across the country, such as in Una and Bhima Koregaon, followed by brutal state repression on them for demanding what the Constitution promises  – justice, liberty and equality.

With Dalit politics taking centrestage, the churning of Dalit politics has thrown up new leaders, new strands of thoughts and alliances, like the militant Ambedkarite movement reminiscent of the Dalit Panthers, under Chandra Shekhar Ravan in Uttar Pradesh, Jignesh Mevani seeking to unify the left and Ambedkarite politics in Gujarat, Prakash Ambedkar in Maharashtra and an alliance which can change the trajectory of Indian politics –that of Mayawati and Akhilesh Yadav in Uttar Pradesh, which is being seen as the coming together of Ambedkarite and Lohiaite politics.

In such a tumultuous era of Bahujan politics, the dubious connections and antecedents of the founder of the BAP and his aides certainly raise questions about the political “start-up’s” intent and timing.

This writer had tweeted a thread on April 24, raising these questions and tagged the handle of the Bahujan Azad Party. However, there was no response. The thread can be read here

Thread on .@BahujanAzad party's links with RSS & AAP. One of their founders is Vikrant Vatsal. An "Ambedkarite" who sports Babasaheb's pic as his profile pic on his fb account. He runs a coaching institute by name of Radiant Academy of sciences in Delhi along with one Amit Singh

On April 25, this writer exposed the links between Vikrant Vatsal and Suyash Deep and had tagged Suyash Deep, alleging that the BAP had connections to the RSS.

Suyash Deep’s responses don’t seem to be convincing and are rather evasive.

In one of his replies, Suyash Deep claims that Vikrant Vatsal was protesting against the “coalition of BJP-JD(U)”. However, Nitish Kumar had ended his alliance with the BJP in June,2013 over his increasing discomfiture with Narendra Modi’s elevation within the BJP. It was only when Nitish Kumar had made his discontentment with the BJP apparent that YDF had started to post and protest against him.

It has also been brought to the writer’s notice that Vikrant Vatsal has been asked questions based on the writer’s thread. Nitish Kumar from Nagpur, who admits his association with the RSS, has come forward to clarify that he has been friends with Vikrant Vatsal for almost a decade and had travelled to IIT Delhi while carrying the picture of “Bharat Mata” with him. The post is reproduced below. 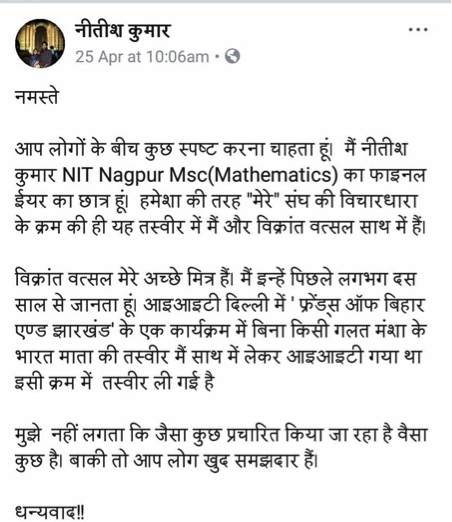 This post by Nitish Kumar has been endorsed by Vikrant Vatsal: 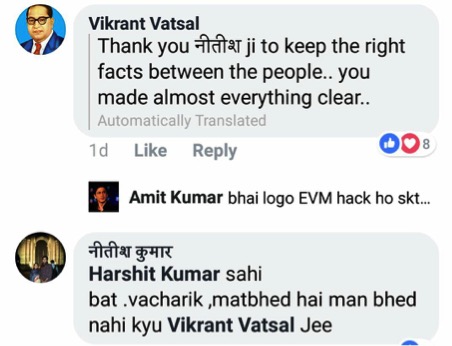 To the best of this writer’s knowledge, no clarification has been offered by Vikrant Vatsal on his association with the YDF.

The writer had also sought clarifications from the AAP on the association of Vikrant Vatsal and Shardanand Giri with the party. The response of Akshay Marathe on behalf of the AAP is attached below: 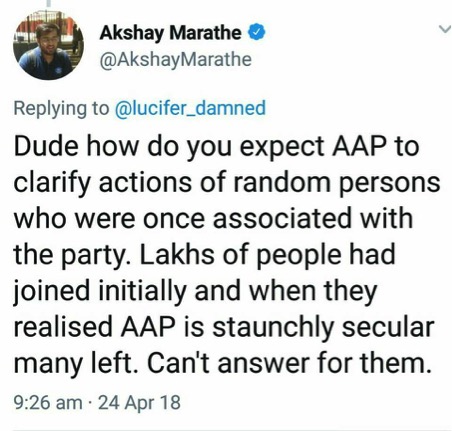 Anubhav Singh is a Dalit activist and a development professional working at the intersection of public policy and sociology. He is also a Masters in Law and Diplomacy candidate at the Fletcher School and tweets at @lucifer_damned.