Although the two engines travel in opposite directions, they work to the same ideological purpose: one is driven to amass private wealth through digital and market gimmicks, and the other to induce a soporific coma in the public mind with regard to the lived realities of the day. 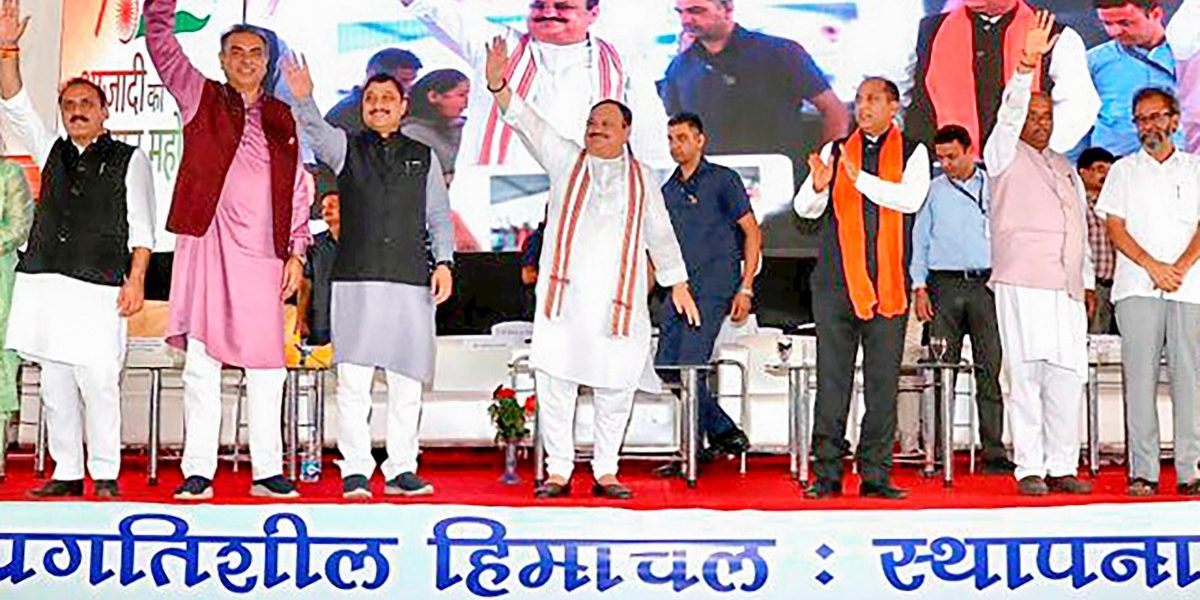 Come the assembly elections in Himachal Pradesh, and the president of the ruling Bharatiya Janata Party has unsurprisingly again proffered the seduction of a “double engine ki sarkar (two-engined government)” to the electorate.

It is, however, surprising that although this metaphor has been around for years now as a great draw for the right-wing, it has not drawn the critical attention it requires.

First, and most obviously, this freebie flies in the face of the federal obligations of the constitutionally operated republic.

The Indian Constitution requires as per law that no government, whatever be its hue, at the centre will discriminate against or in favour of any state government on the basis of political dissonance.

To the blatant extent that the “double engine” metaphor promises some sort of special attention to citizens in any state where they vote a sister BJP government to power, this promise is wholly ultra vires.

It must be asked of the legal fraternity as to why the constitutional validity of this metaphor and of what it purports has not been thus far tested in a constitutional court, since it is futile to expect the Election Commission to step in.

The “double engine” metaphor clearly repudiates the principle of a multi-party democracy and seeks to further a one-party autocratic rule.

Apart from this constitutional infirmity of the metaphor, a deeper irony attends upon it that seems concealed from its users as well.

And it is an irony that speaks to the heart of the ideological structure of the ruling right-wing.

The Bharatiya Janata Party, sourced as it is in the Sangh, indeed runs a “double engine” dispensation.

The catch, however, is that the two engines travel in opposite directions to the grave detriment of the republic.

One engine moves, or seeks to move, fast forward to achieve a class-based, private-corporate technologically-driven “modernity”.

The other moves backwards towards the propagation of irrational myths and claims on which its “nationalism” is based.

This backward engine would have us believe that in ancient times we had knowledge of plastic surgery, aeronautics, satellite vision, even as streams of foaming white milk flowed down our plains, and golden birds perched on the branches of trees.

It is well known that during the Pagan era, such myths were preponderant in the western world.

Also read: Despair is Premature Because Only Change is Inevitable

The difference, nonetheless, is that whereas their intellectuals, historians, culture maestros and ordinary citizens of today know that the stories of fire-breeding dragons, one-eyed monsters, hydra-headed creatures with serpents for a head of hair, even a flying horse (named Pegasus, remember?) are myths that may well be perused for any allegorical meanings, our “double engine” rulers take, and would have us take, our comparable myths for fact.

This conjunction between the two ruling party engines is indeed the repository of how an undemocratic democracy is sought to be conducted: allowing technicians to forge “modernity” while making sure social thinkers, scholars of the humanities, scientists rather than technologists are prevented from unraveling the truths that in fact pervade and disable the living conditions of masses of people, or to advance values of egalitarian thought and humanist oneness. Thus rank casteism and religious bigotry can go hand in hand with the most sophisticated gadgetry.

Remember that Hitler built the autobahns, even as he did not mind extirpating millions because he thought only blonde and blue-eyed people should populate the earth.

Thus, although the two engines travel in opposite directions, they work to the same ideological purpose: one is driven to amass private wealth through digital and market gimmicks, and the other to induce a soporific coma in the public mind with regard to the lived realities of the day.

“Double engine” indeed, and one we could do without.