While TMC’s attacks on other parties are repulsive, the belligerent bands of armed BJP supporters is no less frightening. 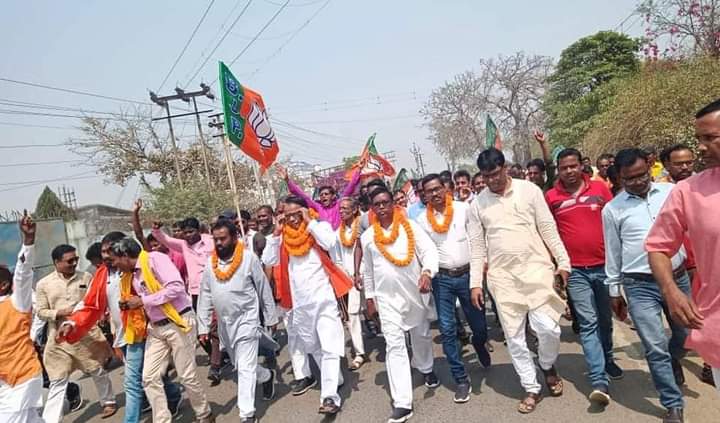 One is taken aback by the ease with which the spectacular verdict delivered by voters in West Bengal has been superseded by headlines about the political violence that broke out thereafter. It is most unfortunate that clashes, injuries and deaths have taken place and one can only bemoan the fact that this tragic tradition has remained intertwined with elections in the state for half a century, if not more. No major party is free from blame and the newly-invigorated state BJP promises to be more than adept in this domain. As one had predicted, chaos appears to be looming as neither the TMC nor the BJP are likely to desist from action and retaliation.

At the time of this writing, matters appear to be under control and Mamata Banerjee took stern action immediately after taking took oath as chief minister on May 5. One hears of hundreds of arrests, including those specific to these incidents, as Banerjee knows she stands to lose a lot of goodwill if she does not bring matters under control. This phase, however, brings to the fore some worrying facts that should interest all those who are keen to retrieve India’s threatened democracy.

The sheer speed with which the BJP operationalised its professionally-prepared ‘Plan B’, which was kept ready for if the BJP lost in Bengal, in the rarest of rare cases, is really worth noting. This narrative’s instant hit reveals how vulnerable we all are, and in just 48 hours, this spin bowling succeeded in diverting nationwide attention from the biggest humiliation that Narendra Modi and Amit Shah have ever received. It could not, however, take eyes off COVID-19. We may briefly touch upon the construction of the narrative, it’s remarkable marketing and the warning it is meant to convey.

The crusading fake news buster, AltNews, and news portals like The Quint have already revealed that a large number of ‘news’ reports of violence that were gulped down by the national media were patently false. This happened more on social media, which the BJP dominates from 2014 and uses to expand its hate circuit and deliver daily fixes to its bhakts. A sample of such misleading items and their debunking can be seen here. Special hashtags like #BengalBurning and #BengalViolence were created to disseminate graphic visuals, scary news and well-crafted allegations. The items appearing under the link reveal, with authenticity and authority, how facts have been liberally mixed with fiction.

An example is the claim made by an MP and president of the BJP’s Yuva Morcha in Bengal that a “BJP karyakarta has been gang-raped by TMC goons at Nanoor, Birbhum. We are also getting distressing reports of rape and molestation from Nanoor”. The state BJP carried this item and a well-regarded ex-MP of the BJP also tweeted about the “Alarming situation in Nanoor (Birbhum district) with more than a thousand Hindu families out in the fields to escape marauding mobs seeking to take it out against BJP supporters. Reports of molestation or worse of women. @AmitShah please rush some security to the area.”

The SP of Birbhum district ordered an immediate enquiry and publicly announced that this was false. The link shared leads us to dozens of other deliberately misleading tweets like the TMC celebrating its victory with swords and knives (which proved to be an mock audiovisual for a song); a video of “TMC goons attacking police” (which is an old clip of an incident in Odisha); numerous eye-popping photos of flames and arson (all of which were old visuals filched from completely unconnected incidents) and so on.

While the godi media, especially the TV channels that are beholden to the regime, lapped up these ‘feeds’, even other sections of the national media carried items, without cross checking. This brings us to the next issue of how the media as a whole is quite overwhelmed by the narrative of the regime and appears unprepared to deal with fake feeds. Before we forget this in a week, let us recall the fright among liberals and the delight of the Hindu Right till even a few days ago about the BJP winning Bengal. Almost everyone in the media was taken in by the swagger that BJP’s victory was a done and dusted deal. The media and even most pollsters had stated that even if Mamata Banerjee won, the margin would be so slim that the BJP could easily bridge it with liberal handouts. The party had, after all, perfected this into a fine art after toppling eight duly elected governments.

Many in the media units now need an escape route and violence is a perfect diversion. More striking, however, is the self-same manner in which several opinion marketeers were influenced to lap up the claim that law and order has totally collapsed in Bengal. As is clear, such unquestioned or even a casual acceptance of the Amit Shah line helps him and his unusually-quiet master the most — to cover up their ignominious defeat in Bengal.

The third concern is that even after the most unequivocal verdict by the state’s voters against the BJP, many in Delhi and elsewhere are actually busy discussing whether president’s rule should be invoked in Bengal. An audacious petition has been filed in the Supreme Court, obviously by the regime’s proxies and surely with prior clearance, that challenges the very root of democracy. It also reflects the growing impatience and wrath of those who despise popular votes that go against their infallible leader. In effect, it seeks a declaration from the court to overturn Bengal’s popular vote, stating that the constitutional machinery in the state has broken down. This is something that the state’s most controversial governor keeps repeating, as advised. Even though it is both farcical and dangerous to even think of imposing president’s rule under Article 356 of the Constitution, we need to read the regime’s message that elected governments do not matter. Though salivating for Bengal will lead it nowhere, the unchallenged manner in which Modi and Shah established their non-democratic hegemony over Kashmir and Delhi obviously whets their desire to replicate this in other parts of India.

The fourth issue is the blunt indication to Banerjee that she will not get a moment’s peace. Modi and Shah know that she has earned her spurs this time for taking a more active role in national politics. All the endless pin-pricks by central investigative agencies do not appear to have cowed her down, though it has surely silenced many other opposition leaders. Her presence on the national stage as a fearless fighter and a David who knocked off Goliath can only be thwarted if she can be kept on the defensive in her state. That is precisely what the opening bumper balls are meant to convey. What is most disturbing to the regime is the manner in which she garnered the votes of the Left and Congress supporters, wiping the parties off most unbelievably, for the first time since Independence. In Bengal, it was not originally a straight fight as it was in Delhi. The boxing ring is also much bigger in this critical state. Banerjee knows that she will be under constant attack as she must be prevented from joining the dots of disparate centres of opposition to Modi’s rule. The regime is bent on constricting her populist approach and spiking her battle techniques or else the opposition may emulate her style.

All said and done, there can be no place for the violence and bloodshed that just happened and none can condone the tragedy of so much blood flowing. No official figures have been released and while the BJP claims that 10 of its followers have been killed, it also speaks of the party’s strength that it could kill some eight or nine TMC supporters as well — as claimed by the TMC. Neither the TMC nor the BJP are known to be peaceful and many shudder at the very thought of riot after riot that may have followed a BJP victory in the state. The danger of inspired riots always looms over Bengal, more so now.

At the same time, Banerjee cannot afford to ignore the 38% of voters who are with the BJP. This is a huge number, considering that Modi’s “tsunami” in 2014 was based on only 33% of votes. It is true that even non-political citizens of Bengal were quite repulsed by the frightening display of aggression that belligerent bands of armed BJP supporters displayed — as they cruised on their motorbikes, flashing open swords and tridents, screaming ‘Jai Shri Ram’. Bengal has seen violence and political militancy for over a century, when nationalist terror first emerged, but there are ethics and limits. In fact, many believe a whopping majority of 48% of Bengal’s voters really banded behind Mamata’s party because its strongmen appeared capable of giving the unusually aggressive BJP of Bengal a run for its money. Be that as it may, the TMC has to stop harassing or killing members of other political parties or else it would soon be back to the very precarious position it was in before the elections. If Banerjee wishes to lead the nation’s opposition against Modi, she needs wholehearted support from the Congress and Left parties. They cannot be on the run in Bengal and be expected to stand next to her in national politics. It just does not make sense.

Banerjee also knows fully well that the powerful section of better-educated, culturally-conscious, middle-class Bengalis, the so-called bhadraloks, moved away from other parties to support her this time – for a specific reason. This class traditionally backs secular liberals and left politics and its solid 10-15% of votes were conditional. If Banerjee is to retain the faith of this class and others who supported her, she must act with determination and stop inter-party clashes, whatever be the provocation. She cannot battle on two fronts. Her primary target is to forge a larger, more inclusive grouping against an unstoppable juggernaut. She needs to prepare a broad-based phalanx to contend with a powerful narrative against her. The present alarm over “the collapse of law and order” is just for starters. She has to be prepared for more attacks, engineered canards and unending harassment from a ruthless party and a vindictive regime at the Centre.