While all the opposition parties claim that their cadres have been attacked by TMC workers, the BJP has unleashed a social media storm of misleading posts, unverifiable pictures and inflammatory rumours.

In the past 48 hours, social media platforms have been packed with pictures and videos of the post-poll violence in West Bengal. More than 14 people have reportedly been killed and all the political parties in the state including the Trinamool Congress (TMC) have claimed that their cadres have been attacked.

Although the Left and Congress party members have also alleged retributive violence against their cadres by workers of the victorious TMC, the BJP is desperately trying to communalise this political violence by blaming it on Muslims and ‘infiltrators’. Many BJP supporters, leaders and pro-BJP journalists have been sharing misleading posts, unverifiable pictures and inflammatory rumours with a communal slant. There is a stark contrast between the reactions of the BJP leaders and the leaders of the other parties.

“Are these reports of gruesome violence in Bengal the TMC’s ‘victory celebrations’? Condemnable. Will be resisted & rebuffed. Instead of focusing on combating the pandemic TMC unleashes such mayhem. CPI(M), as always, will be with the people to protect, assist, providing relief,” wrote Sitaram Yechury, general secretary of the Communist Party of India (Marxist). The West Bengal Congress party called the post-poll violence by the TMC against Congress workers “unacceptable”.

Meanwhile, Kailash Vijayvargiya, the national general secretary of the BJP, shared a video with the caption, “TMC Muslim goons are attacking women BJP workers.” It has received several lakh views and has been shared by many BJP leaders and right wing social media handles, such as Kreately.

It is not feasible to ascertain the religious identity of the men by just watching the video. Only Mr Vijayvargiya can tell us if he has verified the religion of the men in the video before explicitly mentioning it in his caption. Why are the alleged BJP women workers attacking each other in this video? Why are the alleged TMC Muslim goons stopping this scuffle between alleged BJP women workers? These puzzles also remain unsolved.

A poster of Mamata Banerjee with superimposed visuals of arson and unrelated old pictures of Muslim men in skull caps is also being shared. Alt News founder Pratik Sinha pointed out that the two pictures have nothing to do with the recent violence. A poster of Mamata Banerjee with superimposed visuals of arson and unrelated old pictures of Muslim men in skull caps.

Boom Live reported that BJP IT cell members, including Priti Gandhi, the Mahila Morcha social media head, shared a fake video of TMC workers with the audio of Khela Hobe overlaid on it. The video is being shared with the caption, “#BengalViolence #tmcgoons #BengalBurning #ShameOnMamata Victory celebration of TMC goons with weapons. It seems the death infront of us. #SaveBJPKaryakartas #SaveBengalBJPsupporters #SaveBengal (sic)”.

Misleading pictures from 2019 were shared as images of recent post-poll violence in West Bengal with communal and inflammatory captions. 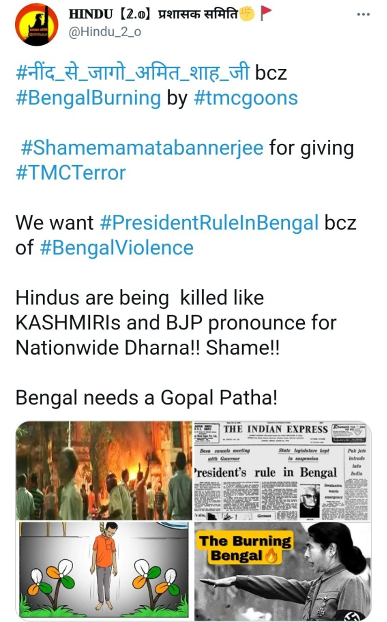 Nirmal Kumar, the BJP Tamil Nadu IT and social media head, shared an old picture of Ram Navami violence in Bengal with the hashtag #PresidentRuleInBengal.

Several BJP supporters shared an old video claiming that TMC supporters are attacking policemen. In the video, a group of men can be seen attacking a white Bolero car with sticks. We found that this is an unrelated video posted earlier in January, this year. According to Alt News, this video was shot in Odisha on January 13, 2021.

The BJP is also using a video of Mamata Banerjee to suggest that the violence was pre-planned by the TMC. However, top BJP leaders had said far more incendiary things before the elections in Bengal. “Once the BJP forms a government in Bengal, the TMC goons will meet the same fate as the goons in UP,” chief minister of Uttar Pradesh Yogi Adityanath had said in a campaign speech. Bengal BJP leader Dilip Ghosh also threatened TMC workers, saying that after the elections, “You’ll have to take a trip to the hospital. And if you do more than that, then you will have to go the crematorium.”

While the BJP IT cell shares a viral video of Muslim BJP supporters being attacked by members of the TMC, BJP leaders and supporters insist that this is a targeted attack against Hindus. Many have called it the ‘second direct action day’, including BJP MP Meenakshi Lekhi and Republic Bharat anchor Pradeep Bhandari. Sudarshan TV’s editor Suresh Chavhanke broadcasted a communal show blaming the violence on Muslims. 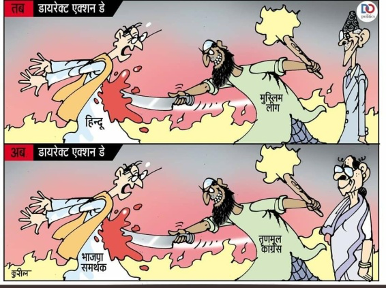 Viral cartoon by right wing cartoonist Manoj Kureel representing Mamata Banerjee as Jinnah as Muslims as the perpetrators of the violence.

“For the past 16 years, Bengal has slowly turned into Bangladesh. It’s worse than Kashmir, Bangladesh, and Pakistan. It’s Baghdadi’s Baghdad. The only difference is that here we have a ‘Bagh deedi’ (MAMATA),” Chavhanke  said. 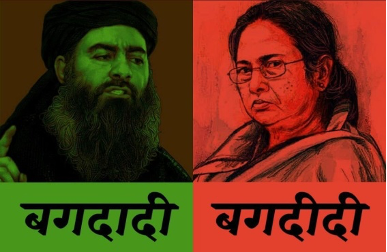 Claims of attack and murder

Several accounts posted the ‘news’ that two BJP women workers have been attacked and gang-raped. India Today‘s executive editor, Deep Haldar, shared the fake news and later expressed regret. The West Bengal police have said that this is a fake claim. And now the Election Commission-appointed police officer has also said that these posts are fake. Keep in mind that similar rumours led to the 2013 riots in Muzaffarnagar.

BJP’s elected MLAs send an SOS to New Delhi after 28 BJP workers get hacked to death by the TMC mobs that are on a killing spree.

Plead of PM Modi and HM Shah to give them protection.

This is just a trailer of how secularism looks like in lands dominated by secular people.

This was retweeted 2,500 times. Actress Kangana Ranaut claimed that hundreds of people have been murdered.

Actor Kangana Ranaut also tweeted a provocative message calling upon Prime Minister Narendra Modi to take revenge and unleash violence in Bengal, which led to her suspension from Twitter. Many right wing handles are demanding military action and the implementation of the National Register of Citizens. They also allege that ‘infiltrators’ are involved in the violence. This is a coded incitement against Bengali Muslims.

In an incendiary post on Facebook, Kannada actor Prakash Belawadi wrote: “Of course, that riot [2002] was practically one-sided, since Muslims made up only 8% of the population in Gujarat. In West Bengal, it’s different: the Muslim population is over 30%. The retaliation won’t be swift. But make no mistake, it will come, in the fullness of time, a Hindu-Muslim riot. When it does, it will be tragic, brutal and organized…It’s already too late to stop it. It is sickeningly inevitable.”

Reacting to the BJP’s sit-in protest call, Atul Mishra, founder of the right wing portal, The frustrated Indian, tweeted that Ram and his vanar sena did not go to Ayodhya for dharna. He went there to kill the Rakshasas.

Meanwhile, the Vishwa Hindu Parishad in its official statement on the post-poll violence in Bengal has blamed “the jihadi elements of TMC” for murders, alleged vandalism in temples, arson and “attack on dignity of Hindu women”. It also said that Hindus will exercise their full right to self defence. 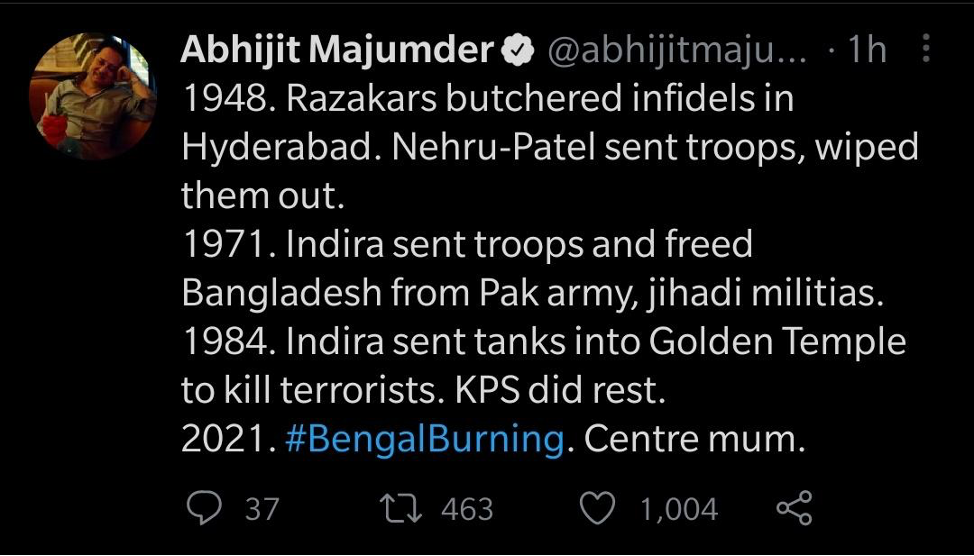 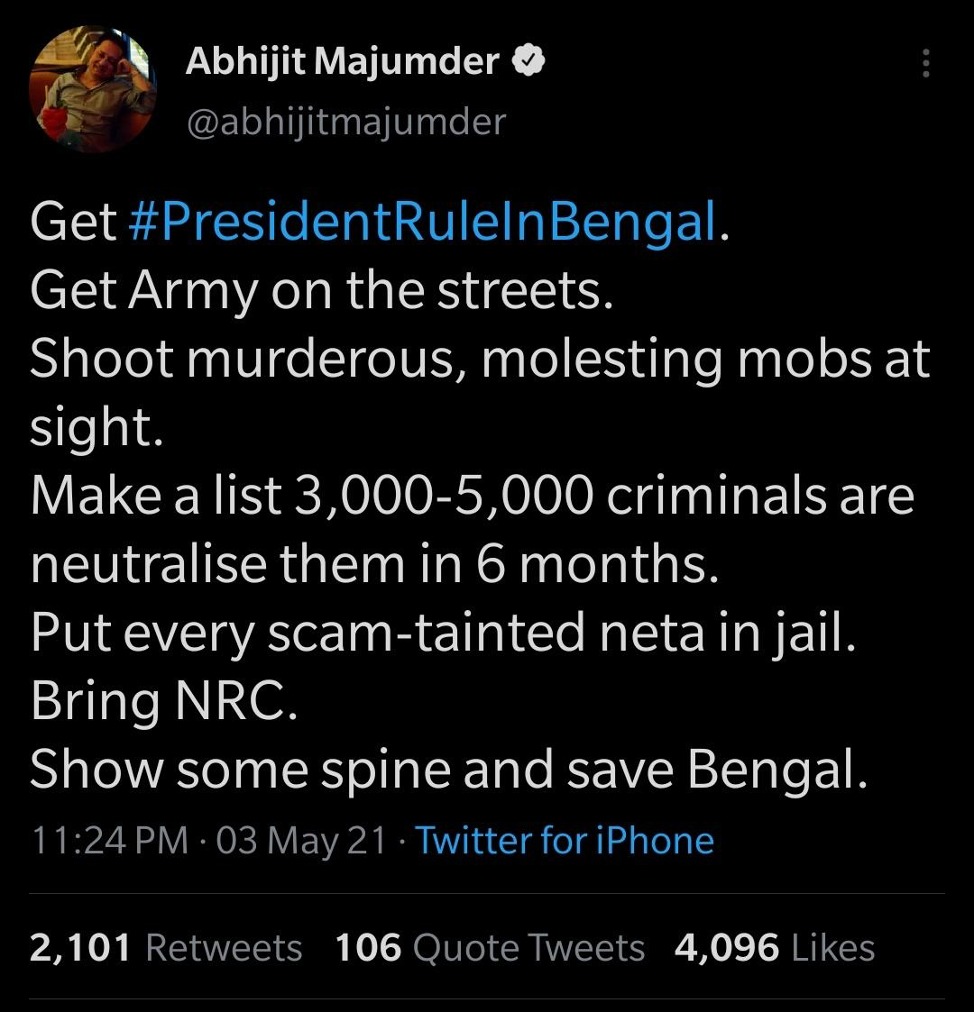 Similar incitements in the past

In recent years, the BJP IT cell has been accused of deliberately misusing social media to incite communal violence in Bengal. After the 2017 Baduria riots in Bengal, BJP supporters claimed that Muslims had attacked the mother of the accused. It was learned by Lallantop.com that the accused man’s mother had died several years ago. In the same period of time, BJP spokesperson Nupur Sharma shared a picture of the 2002 pogrom in Gujarat, claiming it was from Bengal and Boom Live showed that BJP IT Cell chief Amit Malviya had shared an old picture of Bengal with the caption, “Save Bengal.”

In the same year as the Baduria riots, ABP News debunked a viral claim that a Hindu woman had been lynched by Muslims. It was learned that the woman was Muslim and there was no communal angle in the incident. Meanwhile, Kailash Vijayvargiya  shared a still from a Bhojpuri film made in Bangladesh with the caption, “Hindu daughters are being raped” and Tarun Sengupta, the BJP IT cell chief in Asansol, was arrested for communal incitement. In 2018, the BJP MP Babul Supriyo went to meet the victims of the violence in Baduria. He was booked for his “skin you alive” comments to a crowd sloganeering against him.

Communal hate mongering and fake news via social media have escalated violence in Bengal since 2016. In 2017 alone, seven communal riots occurred in just one month due to fake news, according to the Economic Times. In the past few years, the West Bengal government has taken tough action against those who spread fake news. Last year, over 300 people were  arrested for spreading hatred and rumours on social media.

Presently there is a tsunami of disinformation on the internet about the post-poll violence in Bengal. The BJP’s criticism of this violence is primarily aimed at deriding the people’s mandate in Bengal by stoking communal sentiments. BJP leaders across India have urged PM Modi to impose president’s rule in Bengal.

There is no doubt that this will worsen the violence and trigger communal riots in the state. West Bengal has a bloody history of post-poll violence, which in no circumstances can be justified or defended in a civilised society. In such a tense situation, unchecked fake news mixed with communal incitement and Islamophobic propaganda by the BJP and its supporters will only add fuel to the fire.