'We Will Vote for Didi': Mamata Banerjee's Nandigram Rally a Show of Strength for TMC

Despite Suvendu Adhikari's exit, the rally drew a huge crowd, which indicates the popularity Mamata Banerjee enjoys in the region is intact. 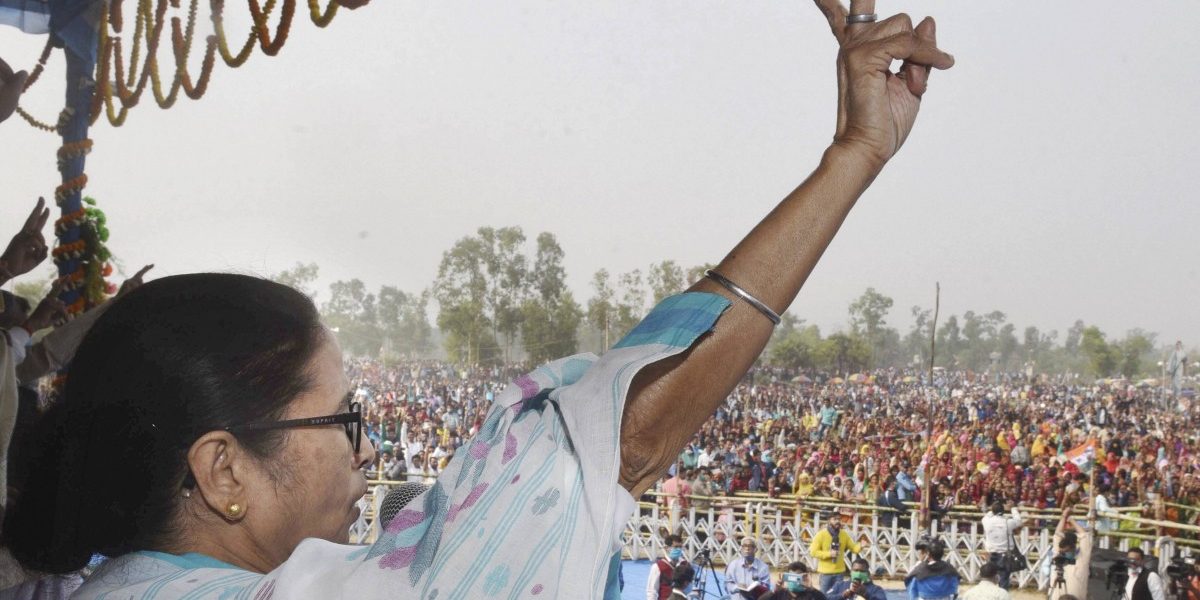 Tekhali (Nandigram, West Bengal): Nandigram in East Medinipur played a crucial role in toppling the Left government in Bengal and propelled Mamata Banerjee to the chief ministerial position in 2011. Ten years later, when Banerjee is fighting arguably the most difficult election of her political career, she brings back the fight to square one – Nandigram.

This decision is politically significant as the sitting MLA from the region, Suvendu Adhikari, once Banerjee’s trusted lieutenant, defected to the Bharatiya Janata Party in December and categorically attacked the incumbent chief minister and her party.

After joining the saffron party, Adhikari claimed it was he who led the Nandigram movement, and not any leaders from Kolkata. He even gave credit to the BJP and its leader L.K. Advani for helping them fight against the forcible land acquisition by the Left Front government in 2007.

Mamata’s rally on Monday a show of strength of the Trinamool Congress after Adhikari’s exit. The rally drew a huge crowd, which indicates the popularity she enjoys in the region is still intact.

“People don’t want to say anything, now they will give the answer in the ballot box,” said Biswajit Giri. When probed further he said, “Suvendu Adhikari controlled everything here. If there is corruption, he and his men are responsible. Switching sides now won’t help.”

Samsundar Maity, a retired state government employee, said, “People here are not happy with what the Adhikari family, especially Suvendu, did with the TMC. They have controlled everything in Purbo (East) Medinipur for the past 10 years. I am not a TMC member, still I am saying this.”

Soon after Suvendu joined the BJP, his younger brother Soumyendu followed him. It has been a few months since Sisir Adhikari distanced himself from the party. He stopped attending TMC programmes and even openly rebelled against the party.

Forty-two-year-old Fajana Bibi came to attend Monday’s rally in Terapekhai and said, “We are always with Didi [Mamata], as she understands our life and difficulties. We will vote for Didi.” When asked if she benefited from any state-sponsored schemes, Bibi said, “My son got a cycle. We have received free ration during lockdown. I recently got the Swasthya Sathi (medical insurance) card.”

Akhil Giri, TMC MLA from Ramnagar, told The Wire, “After today’s meeting, I can just say one thing – Purbo (East) Medinipur will give her second chief minister to Bengal.” When asked about the BJP’s rise, Giri said, “For Suvendu’s rally, they (BJP) had to bring people from other districts to fill the ground. Today, we couldn’t give place to people, thousands couldn’t even enter the meeting ground. This is the difference.”

People at the rally were surprised when Banerjee announced that she would like to contest from Nandigram. “We are happy that Didi decided to contest from our place. We will make her chief minister again,” said Sunil Sarkar, a daily-wage labourer.

Resentment against Suvendu Adhikari could be observed at the rally, but it is difficult to assess how much of it will reflect in the ballot box. Suvendu is still a popular name in the district and the BJP is using this to build brand. Cutouts with Suvendu’s image can be seen in most parts of the district.

As we left Tekhali, we spotted BJP workers preparing for Suvendu’s counter rally on Tuesday at Khejuri’s Henria. When asked by a BJP worker there about Mamata’s meeting, the person said, “We don’t want to say anything.”